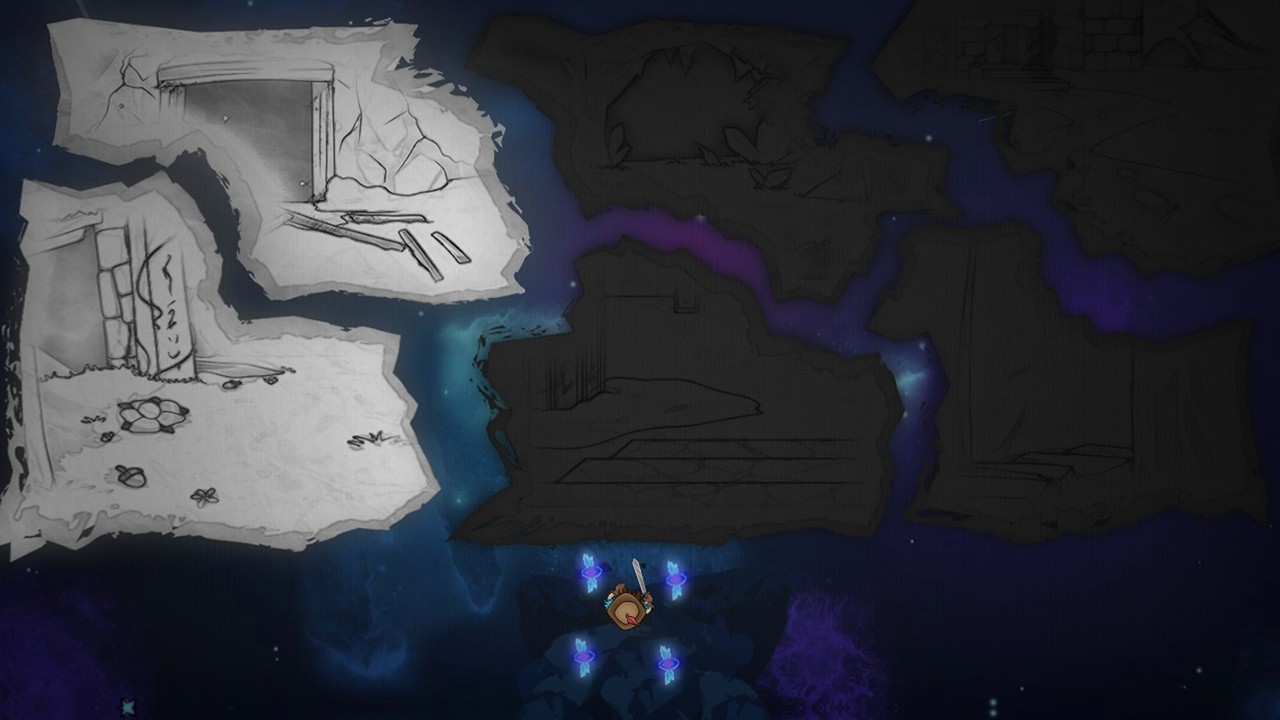 The Story Goes On is another in a long line of procedurally generated roguelike dungeon crawlers that has found its way onto Nintendo Switch. The brain child of Scarecrow arts, an indie studio originally founded by a group of friends, The Story Goes On has had a facelift since its original release exclusively on the Xbox One. Now in 2020 the game has a reduced price point to accompany its fresh coat of polish, alongside a new couch Co-op mode to breathe new life into what is really a game that is 5 years old now.

The game starts by letting you play as Aiden, whom has several personality traits attached to him, other character icons are shadowed out with the ability to unlock these later in the game. You are then quickly transported into the story with little plot or exposition given away, just RUN gosh darn it! Also, don’t hit the scarecrow!

What follows is a quick and simple tutorial to get you used to the controls, slashing with your sword, using your ranged weapon and special moves, before letting you loose on a couple of the procedurally generated dungeons to get a feel for the mechanics on offer. This is really well thought out, as it allows the player to understand the mechanics of both this game, and roguelikes in general before the story is revealed in full. Whereby the other 4 worlds are revealed to you, and the plot of the game unfolds. 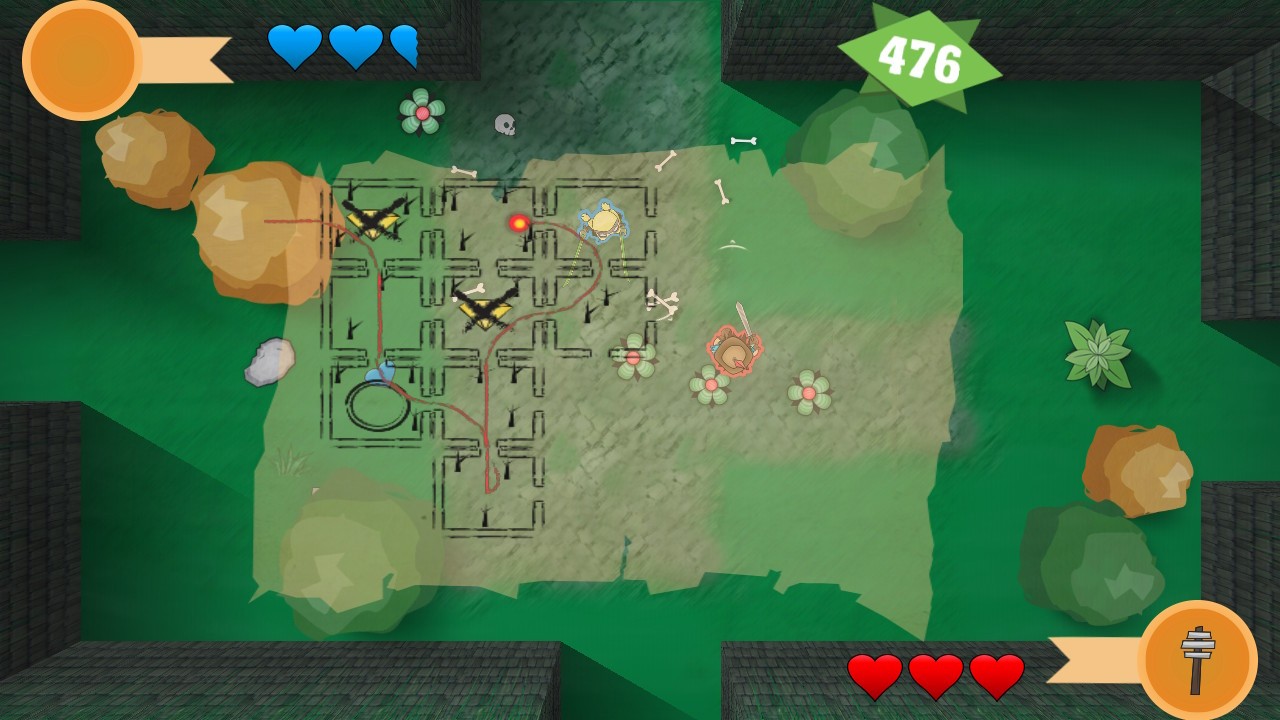 Each world has randomly assigned dungeon layouts, with the enemies and loot encountered also randomly generated. The idea is you dungeon crawl in every sense of the word until you discover a boss key, then tackle the boss of that level, which early on can also be randomly generated. At the end of that, you can purchase upgrades before embarking on your next quest.

The gameplay is relatively simplistic, but at times infuriatingly difficult. However, the level of difficulty is massively inconsistent at times. The start of the campaign is always tough as you are weaker and slower, gaining upgrades through the levels increases several stats in strange and amusing ways, but eventually your character will become overpowered and the crawling will appear easy, with the boss fights providing the only real challenge, albeit a short one. Again, this sort of helps the roguelike aesthetic as it makes it less difficult to lose your character once you have put the effort in, but challenge in a game does not have to equate to the death of a character and this is an area the game lets itself down in.

One area of criticism is the disappointment once you load up the game and realise you only have the one character available at first. The trailers show off this vast array of well designed and thought provoking characters that I would have loved to have seen earlier in the game, while my intrigue was still high and I wasn’t thinking about the next title in my ever growing backlog. While this is technically a minor issue, as the characters are unlocked as you progress, it would have been nice to see more of what was clearly being used as a selling point.

Finally, the obvious aspect of the roguelike element, the permadeath. Dying in game sends you back to the beginning with only key unlockables being left available to you. Which ties into the previous complaint. You die and it is a difficult drive to get back to the skill level you were at. Which, while part of the point of playing a roguelike, means that many players new to the genre will be put off. Overall though, the gameplay can be described as good, solid dungeon crawling, with little to no real faults of those who know what they’re buying. 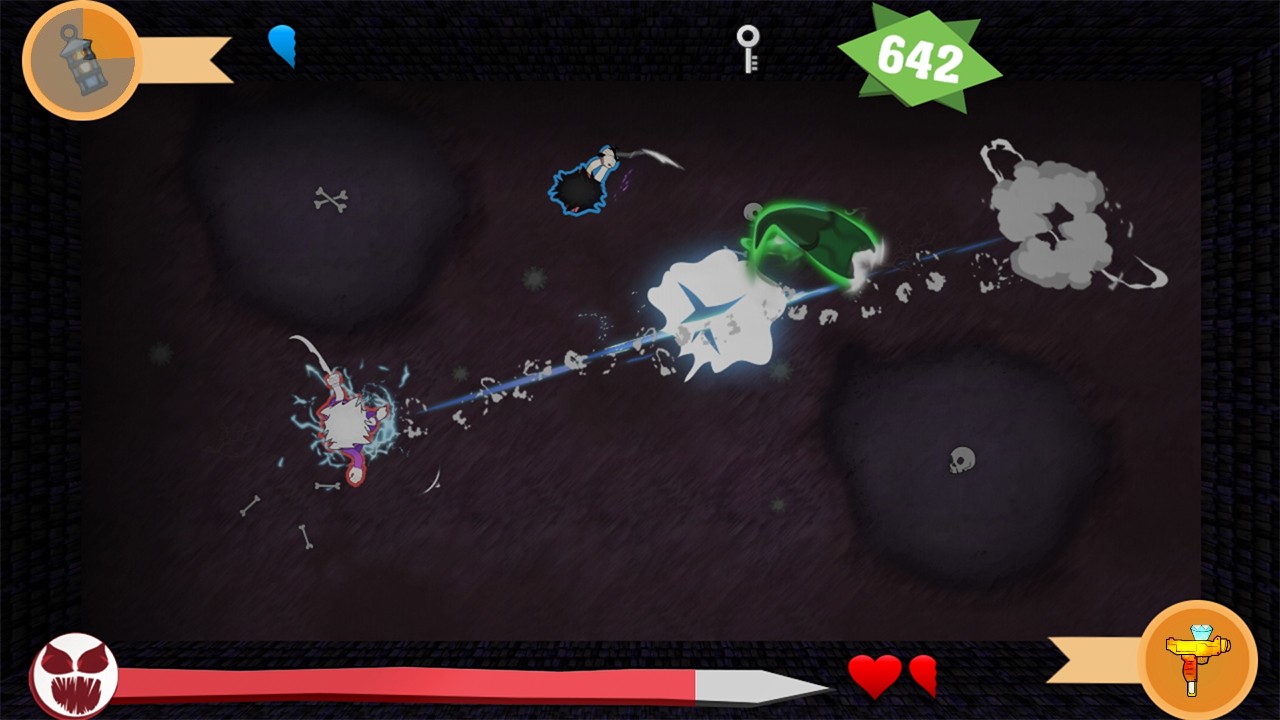 The game’s audio is both basic and yet well thought out. The melodies themselves are simple orchestral tunes that give a feel to the game, a sense of adventuring, etc. But their real shining moment is the ability for the music to crescendo and become more complex when there are more enemies engaging in combat, and likewise calm and quieten when the room is empty. The sound effects add little to the soundtrack, but without them the game would seem off so it’s hard to really criticise a game based on its choice of sword slashing sound.

The graphics are also a bit lacklustre at times, which is a real shame considering both the potential you see while playing, and the background that the studio claims to have. Whilst the game has had a polish from previous iterations, it still resembles little more than a slightly upgraded Newgrounds title at times, particularly in the backgrounds and environment textures. There are, however, flourishes in creative design, most notably during any period of animation, again this links to the studio’s previous expertise. The character designs do salvage something from the graphics department though, being well thought out and creatively interesting.

Using humour and self awareness in the game sets it apart from many roguelikes as well. The game at no point tries to take itself seriously, whether it’s the humorous use of puns in weapons or power-ups, or the random puns, put forth from your scarecrow companion, there is an attempt at lightheartedness as you lay down your life for the sake of the story.

Overall, The Story Goes On is a fun dungeon crawler with elements to make seasoned veterans of the genre find enjoyment and encouragement. But for newer players looking to branch out from other RPG games, there is a real risk that the inconsistencies in difficulty will be off putting. But I’d like to think players who work through those early issues are rewarded with an innovative use of plot mechanics, a fun twist ending to the story, and a ton of unlockable features. The only downside to the Nintendo Switch version over the Xbox One is that there are no achievements to unlock, which would have added a further level of replayability to the game. And for the reduced price, definitely one to pick up.

The Story Goes On Review

With a wide range of roguelikes being released on Nintendo Switch, it’s difficult to set your stall out from the competitions. The Story Goes On aims to do so in its lighthearted and self aware narrative. The inconsistent difficulty could present problems to players new to the genre while creating boring combat for seasoned veterans, but this does not take away from a title that provides some amusing and creative story telling tropes. At a reduced price, despite the time and money that must have gone into the quality of life improvements advertised, this is one to pick up.