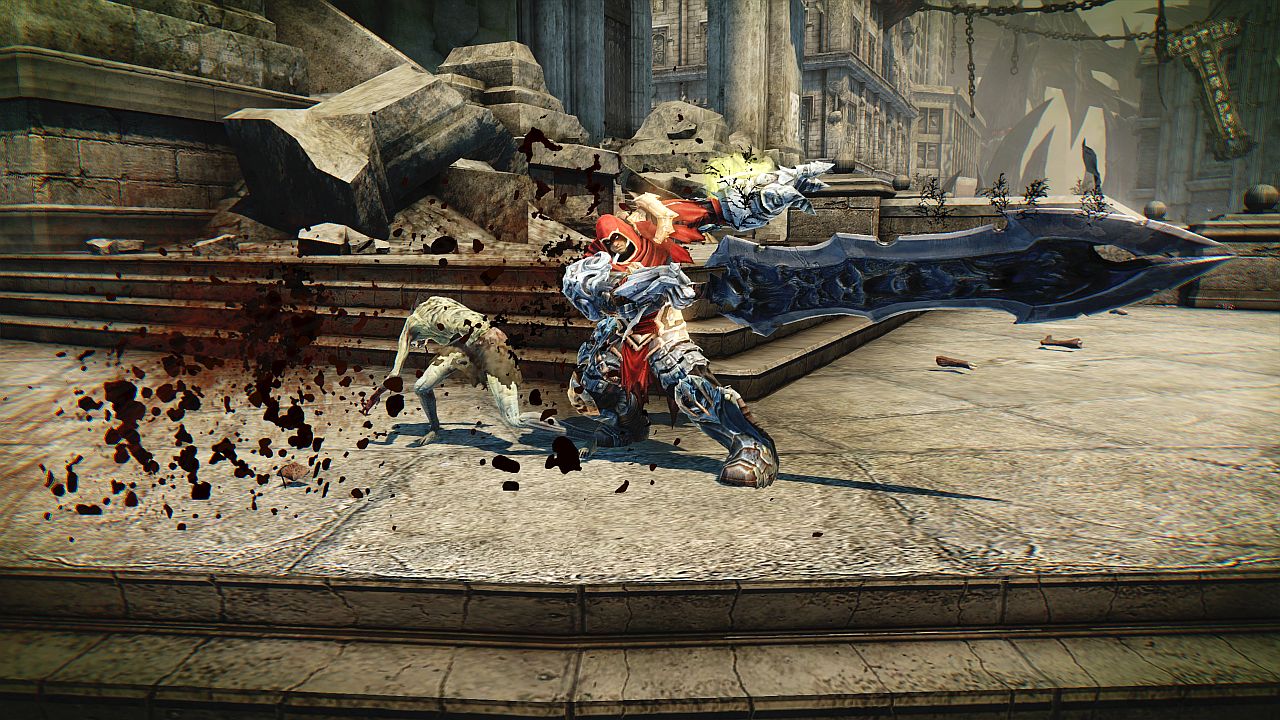 Recently I’ve played the latest Darsiders game named Darksiders: Genesis, where the adventure plus hack and slash approach has been left behind, giving the chance to a new kind of gameplay, something more like a Diablo-like. So instantly I missed my old days along with my first Xbox 360 playing the first Darksiders title, which I haven’t spent too much time with because I was so tired of button smash games. So I thought to myself: why not give it another chance?

Darksiders Warmastered Edition it’s the first departure of the current three games of the apocalypse horseman. The title originally came to the Xbox 360 and PS3 generation ten years ago (2010) through THQ’s hands and created by the comic writer and artist Joe Madureira. And I can assure you that I couldn’t never ever think it’d be possible to play this gorgeous game on a portable device. Well, until now. And yes, the graphics are pretty beautiful to me.

The plot is about an age before the human race existed. When there were two powerful kingdoms that waged endless war: the Kingdom of Heaven and the Kingdom of Hell. To regain and maintain order and balance between them, the Council created a group of four powerful warriors neutral to the conflict and responsible for ensuring obedience to its laws. This group received the name of The Horsemen of the Apocalypse.

In the meantime, the first human beings appeared, and a third kingdom was created for its existence: the Kingdom of Men. The Council felt that humanity would also be of great importance as part of the balance. A peace agreement was signed between the kingdoms. so that humanity could prepare for the future confrontation. In due course, the seven seals that represent the pact would break, Heaven and Hell would fight once more, and the four Knights would judge all kingdoms. And War was called up long before the seals had broken. 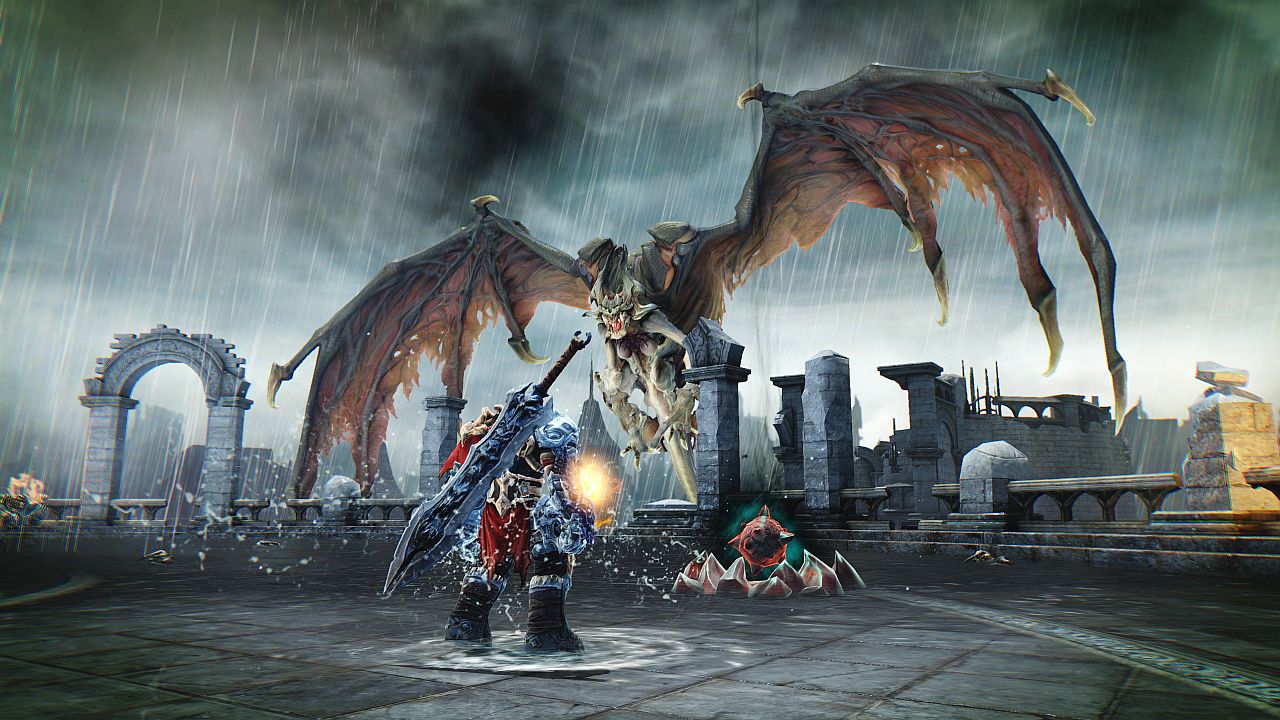 Darksiders Warmastered Edition brings us the Apocalypse’s Horseman War, a servant of The Council, for a battle in the middle of heaven and hell. War starts on the first cutscene landing on Earth when a pandemonium is happening, without the knowledge of why he was summoned for. His first and somewhat forced mission is to eliminate angels and demons on his way – and some humans, maybe as an accident -, until you get moved by the desire to eliminate an entity called The Destroyer.

When Darksiders came out last decade, I’d tell you that it was really inspired by some hack and slash titles like God of War and Devil May Cry, but people also were right when they said Darksiders is like The Legend of Zelda. Indeed, at first look, it’s really weird to make that comparison. But honestly, the fact is Darksiders mixes these two games in one blending that works very well; I’ve got to say. The core gameplay is dungeon based after some point (not initially), where the player should face enemies and solve puzzles, then slay enemies again. It has a loop of gameplay that doesn’t let you down or get tired, since this constant variation keeps holding up the whole game pace, which gives you a sense of a reward in short takes and fast intervals. Even though the puzzles can be summed up in simple tasks like push up blocks, climb edges and whatever, as aforementioned this helps you a lot to get away from repetitive button smashing gameplay.

Yet the combat system is great and gives you two stances of attack, by only pressing or holding the attack button. Although initially you don’t have a lot of skills on your skill set, this can be changed as you progress on the story, by upgrading your character and purchasing better weapons. There are also elements that are clearly borrowed from God of War games, because of the pure hack and slash battles – except the Zelda-ish lock on feature -, the wall climbing, the evade movement, health upgrade due to fragments collecting and all the gore, blood and visceral finishings. And I can’t forget the upgrade system and the purchasable equipment sold by Vulgrim, the demon merchant, using souls gained from killing enemies and destroying environment objects like cars, benches and garbages.

Also, some signs of last generation game design choices are still there, like some button popping up to perform simple actions, like to open chests or doors. It’s impossible to reject the clear inspiration in Santa Monica’s franchise, and I can almost hear Kratos screaming on it. Despite that, Darksiders is an awesome game with a not dated gameplay that works very well and still pleases me nowadays. 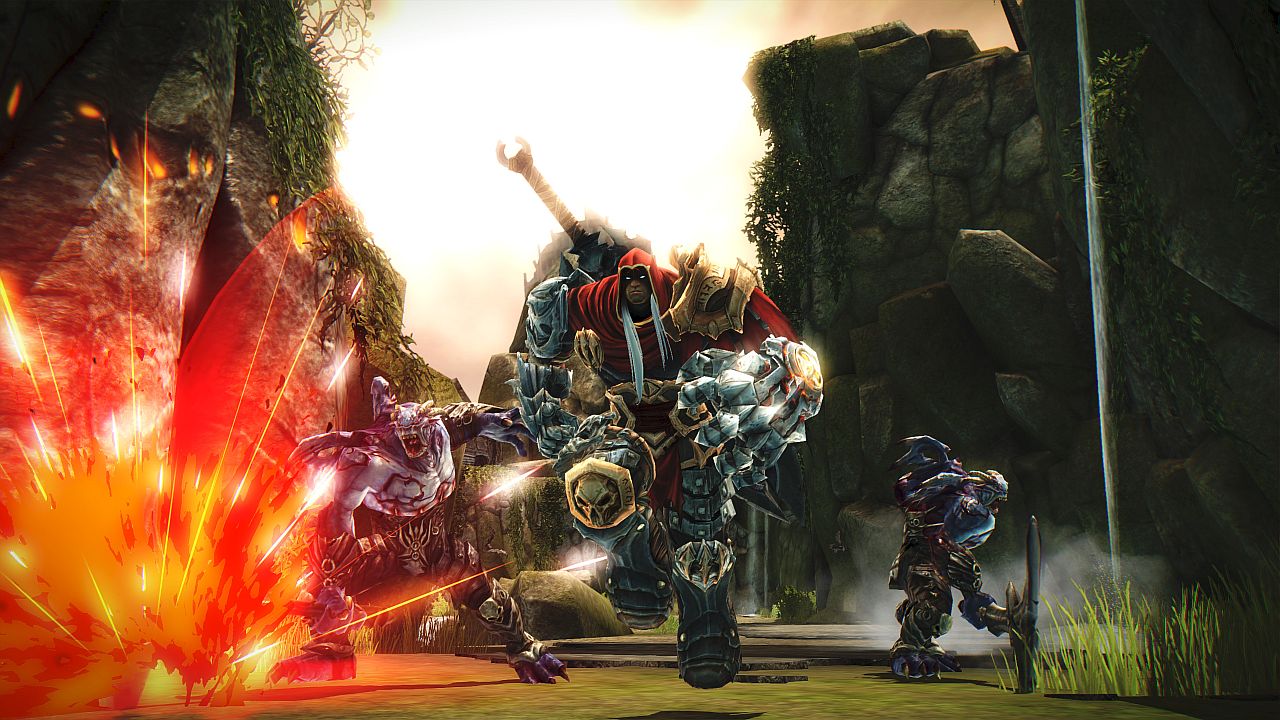 Speaking of the port itself, it surely has some minor stuttering issues, and even setting up the visuals option to Performance Mode it won’t fix this entirely. And the Quality Mode runs locked at 30 FPS, very good instead of having something with unlocked and inconsistent frame rate. It doesn’t seem like a slideshow or anything close to it. I’ve seen many worst and lazy ports that were made for Switch lately, and Darksiders Warmastered Edition is far better than them. Apart from that, this version is somewhere a downgrade one of PS4/Xbox One gen, and obviously the Switch couldn’t hold up all the special effects and high resolution textures. So you will notice some poor and blurred texture filtering on some areas, as well as a lack of anti aliasing.

But, please, don’t be a nitpicker. The game runs very well and better than last gen and has much better textures. Apart from that, there’s no new content or any DLC coming to the Switch version. Speaking once again of the Performance Mode, it keeps the 60 fps at most of the time, except during some screen busy moments with a lot of visual effects or a group of enemies in battles. And worth noting the extremely quick loading times, that seem seamless by the time you die and get back into the game, a really important stuff to have here.

In conclusion, Darksiders is the perfect case of a game that can be considered timeless – in my opinion. Its gameplay might feel dated for some people, but, honestly, God of War style games still feels good. C’mon, sometimes you just want to distress, slay some demons and see a lot of gore on your screen, and this only becomes better even because you can take it with you wherever you want to.

Darksiders is the perfect case of a game that can be considered timeless. Honestly, God of War style games still feels good.