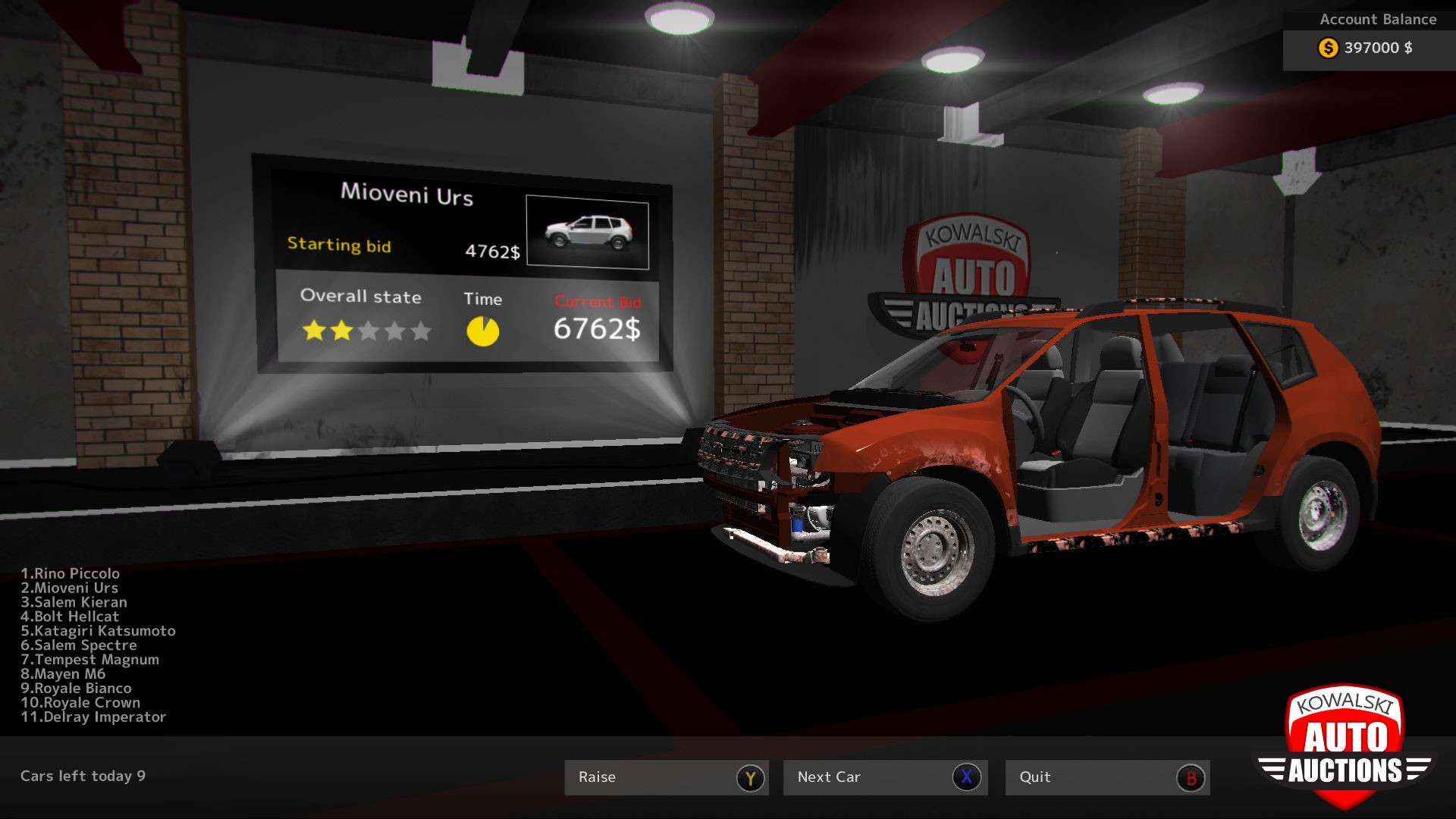 If you’re a driver, I’m sure you’ll agree with me that it has its difficulties. The euphoria you experience as you buy your first car, or any car for that matter. Then the real lows such as breakdowns, MOT failures and the immense feeling of road rage grinding your gears on a bad day.

I’ve always wanted to understand cars, how they function and the logistics of how they drive. Truth is, I’m the kind of driver who knows what peddle does what and how to change a tyre and that’s my knowledge of cars. My father was a vehicle mechanic for well over two decades and decided in his mid 40s that cars were coming well too advanced and hung up his boots, I wish I’d spent more time with him learning about vehicles.

Car Mechanic Simulator Classic drives its way onto Xbox One and is developed and published by Ultimate Games. I always have a sense of intrigue whenever I see the word simulator in a game. Most of them offer unique experiences that you just won’t ever find in other games. Car Mechanic Simulator Classic challenges players to repair, paint, tune and drive cars. You’ll also have the opportunity to expand and build up your garage and business as more jobs come rolling in. 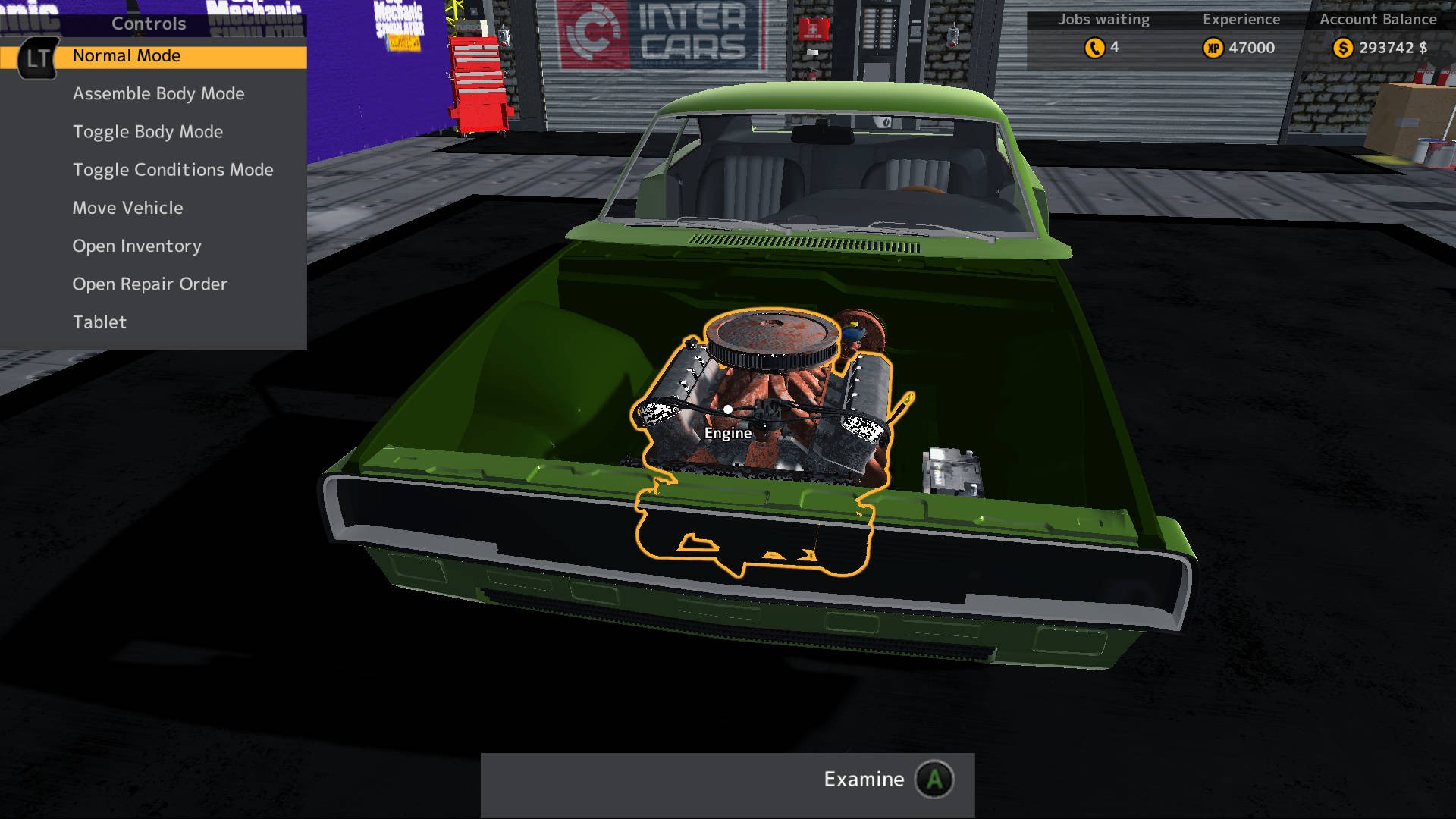 I’ll run through some features and then delve into the gameplay as I’m sure the car enthusiasts will wonder what this game actually entails. You’ll be able to interact with your customers as calls come in asking for their vehicle to be fixed. What I found realistic was the phone did not stop ringing whilst I had my head buried in the bonnet and it became quite frustrating having to keep answering the phone. You’ll be able to order specific vehicle parts and materials including used car parts to drive costs down and make more money in the long run. There is the option to buy repair manuals in order to learn and work more efficiently, to enable you to work faster and take even more revenue.

First, I have to admit I found the game overwhelming at first. There appeared to be no real tutorial or instruction on what to do and how to proceed and the control system felt a little clunky and rigid. I’m a sucker for a tutorial in games, I think it is important, especially in a simulator experience to get the basics in place and go from there. I am willing to learn though, so I pushed on and learnt to adapt, stick with it as it will become a little clearer as you push on. I’ll be completely honest and admit that when looking under a bonnet, I know just about enough to find out where the brake fluid, screenwash and oil is located and how to conduct a jump start. Anything else out of the ordinary and I’d be left scratching my head. I found the first repair to be a mistake as I started ripping most of the engine out when actually all I needed to do was get it up in the air and go from underneath the vehicle. I kept telling myself it is all part of the learning curve, although a little nudge wouldn’t go amiss. What I enjoyed was the fact that this will teach you some useful things about where engine parts are roughly located for amateurs like myself.

So with the phone constantly ringing, it is ringing for a reason and that is because you have more amateurs like me wanting their cars fixed. You’ll be able to accept or decline a job on your own personal basis of whether you want to carry out that repair. As in real life, maybe you’re backed up with jobs and don’t have the time to fit it all in. The jobs that come in will range from something simple like an oil check and change to a full on engine rebuild. Upon accepting the job, the vehicle will then roll into the garage and you can get to work immediately. The process will be for you to find all the faults involved and their locations, you then order the parts directly from the computer in your garage to be delivered. Personally, I found that carrying out some small jobs at first gave me the chance to adjust to the clunky controls and get used to the mechanics of the game. I highly recommend this if you are like me and know nothing about cars as you’ll be instantly bombarded with scratch the head moments if you take on a job too big at first. 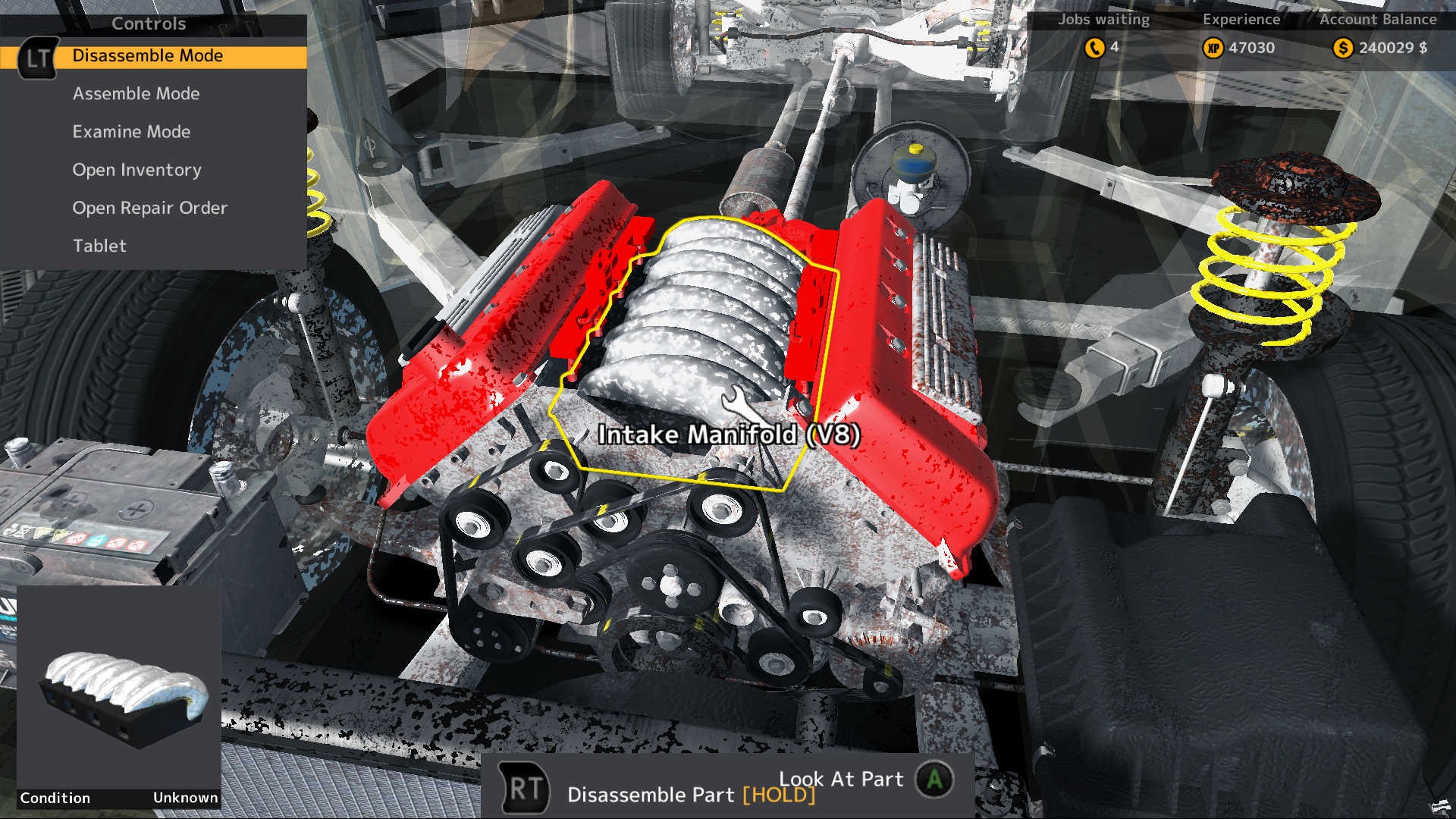 Graphically the game isn’t fantastic and probably would still run on a mobile tablet device, although I get that graphics aren’t what these games are striving for. There is music playing constantly in the background, which wasn’t to my taste and became just as frustrating as the phone ringing all the time, so I turned that off in the settings. I feel they could have worked on the music elements a little more so that they suited the gameplay. For me it was like sitting in a library with happy hardcore blaring out. A library setting would be more suited to jazz or classical music, something calm and soothing.

The real aim of the game here though is to generate as much money for your business as possible by completing job after job. I didn’t expect there to be any element of a story in this title, but I can’t help but think more could be here and I know the developers are limited in terms of budget and time. I’d like to have seen not only the mechanical side of the game but also may be getting jobs where vehicles could be completely modified and specifications changed by altering parts purely for power, performance and cosmetics. Essentially though it is; picking up a phone, accept or decline the job, order parts, fix the car and gain payment. It can be extremely repetitive after an hour or two, but there are some rewarding factors here. Carrying out the bigger jobs is satisfying when you complete them and see the revenue increase.

Car Mechanic Simulator Classic was enjoyable for a few hours for me, however, for car enthusiasts they will probably see more joy here. The one thing it has holding it up, is there is no direct competition as it is essentially the only Car Mechanic Simulator title on the market. With a clunky control system, basic graphics and a rinse and repeat experience it gets very stale, very quickly. With a little more work on the overall package may have given it some replay value, but sadly for me there isn’t any whatsoever.

Car Mechanic Simulator Classic will be a solid title for vehicle enthusiasts, however, its clunky controls and repetitive gameplay will test its longevity