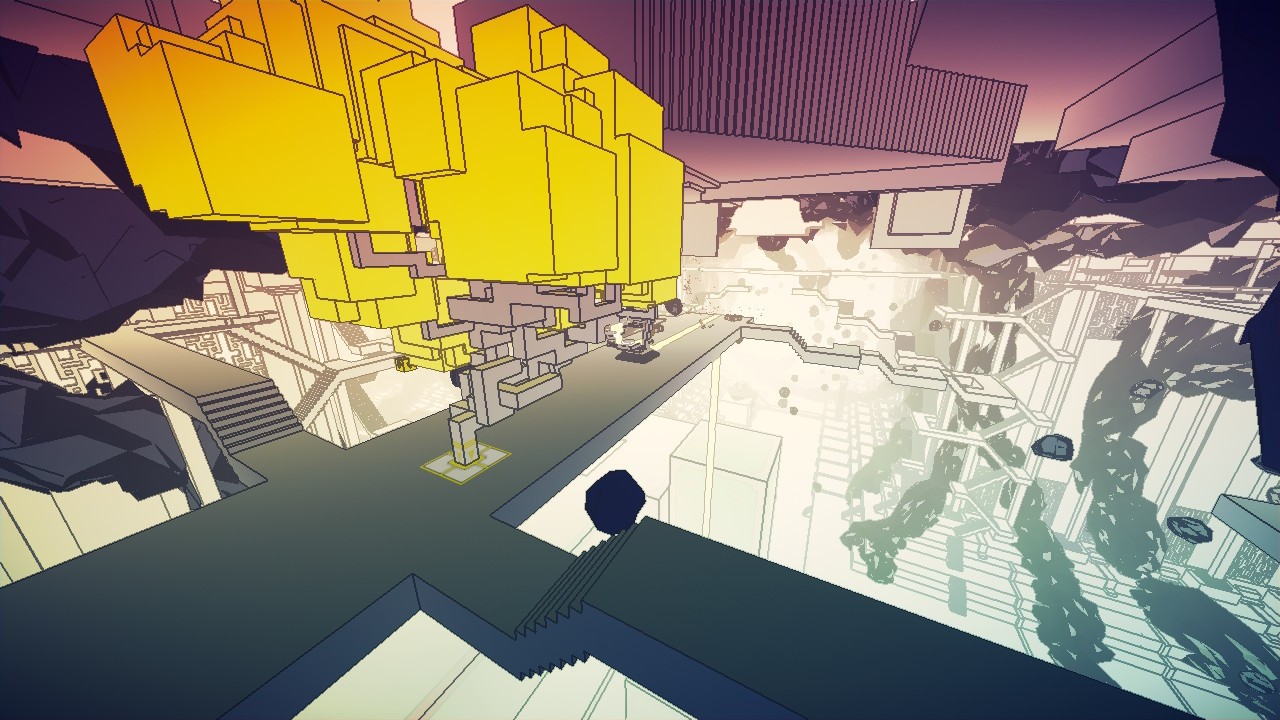 Manifold Garden by William Chyr Studio is simply endless. Artistically sound lines, shapes, and structures that appear to repeat into infinity. Don’t be fooled by how simplistic and calming it looks. This puzzle game will quite literally make your head spin upside down.

Manifold Garden is a physics based Escher-esque puzzle game released in October 2019 for Windows, MacOS, iOS and now the Nintendo Switch. It re-imagines physics, gravity, and infinity all in a neat and clean package. The visuals, though simple, are quite stunning. I love how the world looks and how you interact with it. I admit I felt my stomach drop when I accidentally fell off the side of a structure, thinking I was about to die when in fact you just fall endlessly. However, pay very close attention to the structures around you because it took me a bit to realize that I was falling in a loop.

In Manifold Garden, you’re manipulating gravity to complete puzzles. So walls become floors and floors become ceilings. Some puzzles can only be completed by falling off a ledge from various parts of a structure and onto another, either at a lower or higher point. Several objects and elements in the world can only be interacted with if you’re oriented in the correct gravity, which is represented by 1 of 6 colours. Your reticle will change to the corresponding colour if you aim at a wall or structure. I admit, flipping the room and world around in order to utilize objects and tools took some getting used to, and I was a tad bit disoriented. Because certain mechanics can only be interacted with when the room is in the correct orientation, some objects and buttons cannot be pressed or objects moved.

For example, if you move a red box in the red plane and flip to the blue plane, the red box will de-colourise and you cannot interact with it. So you have to think carefully about how you manipulate the room and objects because the orientation will be reversed. I know, it’s a little confusing, but the feeling of having solved a particularly tough puzzle is quite rewarding, especially if the solution is right in front of you. 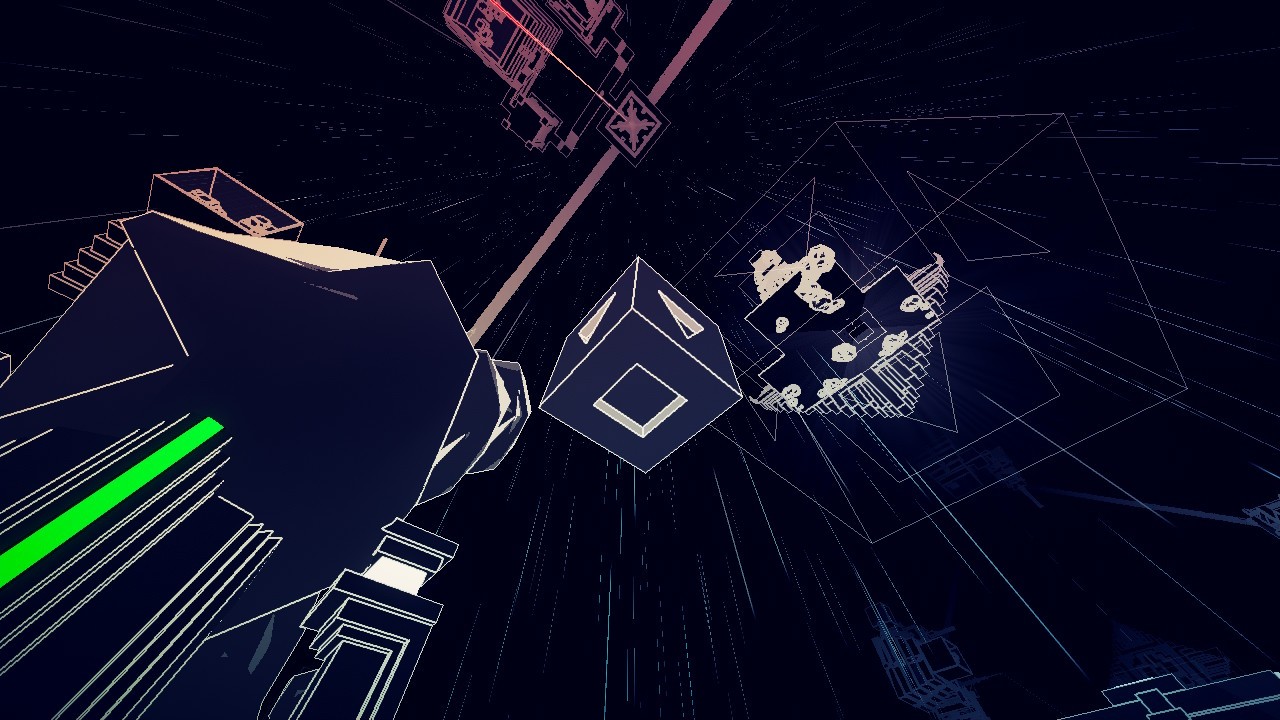 Manifold Garden’s music is subtle, relying on the atmosphere and ambiance to speak for itself. You can hear some music, but it’s definitely not loud, which in this case is totally fine. It’s actually quite a calming experience, despite some puzzles being head-scratchingly difficult. Or maybe I’m just bad at puzzles? Anyway, you can hear the minute sound effects like the pressing of buttons, wind as you fall endlessly, or the sliding of boxes. So it’s kind of like those A.S.M.R or autonomous sensory meridian response videos. It’s relaxing.

Visually, Manifold Garden is stunning from an artistic standpoint. William Chyr has done a remarkable job combining both complexity and simplicity in the designs of the puzzles and of the world. Earlier on I mentioned Escher, Maurits Cornelis Escher was a Dutch graphic artist who made mathematically inspired woodcuts, lithographs, and mezzotints. You know him better as the artist behind the Penrose Stairs or the impossible staircase. That is how the design of Manifold Garden feels. It’s very fluid and mathematically pleasing to the eye how perfectly the lines and shapes continue in their loop.

Controlling yourself in Manifold Garden may seem daunting, but once you get used to flipping things around and which walls or ceilings are what colour, it becomes second nature. You can interact with objects using A, run using ZL, rotate items clockwise or counterclockwise with L and R, and change gravity with ZR. Movement and looking are the left and right thumbsticks, respectively. There is also a photo mode should you want to stop and admire your surroundings. 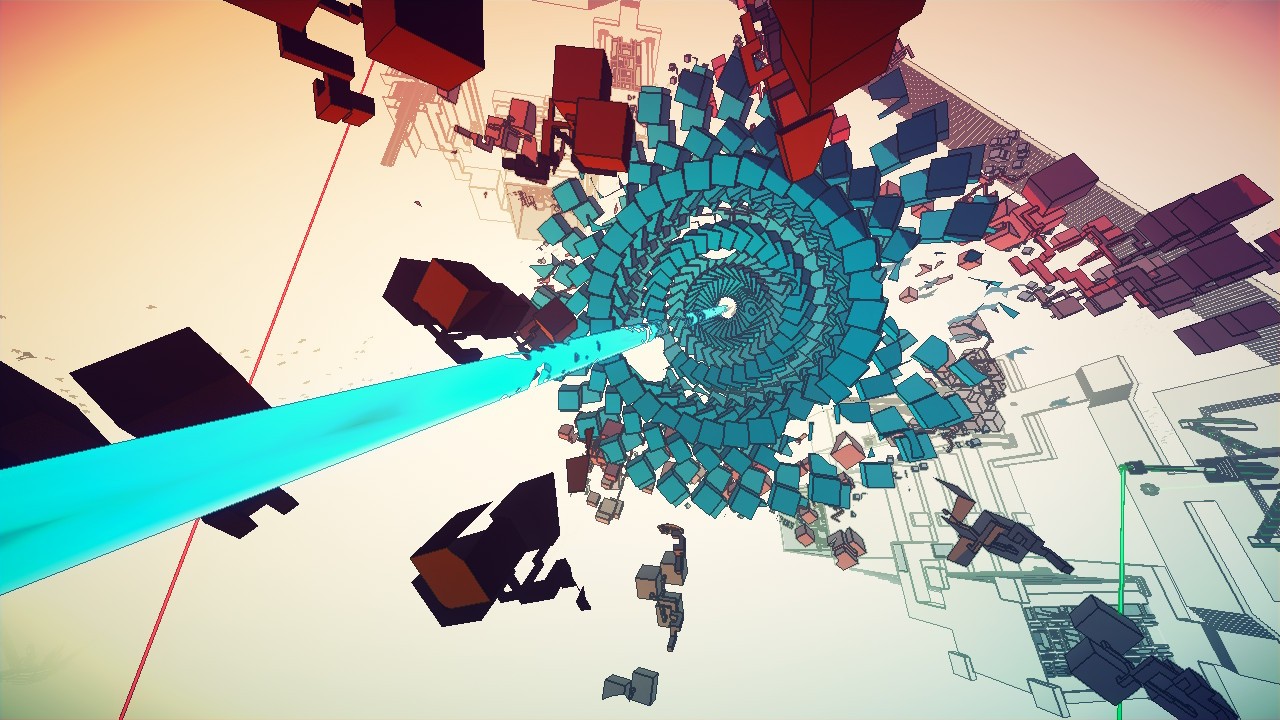 The puzzles in Manifold Garden can be quite a bit challenging and the only issue I had was being lost at what to do or where to go next. There’s no puzzle list or quest system. You just have to have a keen eye and a sharp mind to figure out the next steps. It helps to stop and look at your surroundings or take a break and come back to it. The game is about 7-8 hours and there isn’t a time limit on any puzzle, nor do you die. You just play and complete puzzles at your leisure.

It took roughly 7 years to develop Manifold Garden, pulling inspiration from MC Escher, Lebbeus Woods, Frank Lloyd Wright, Tadao Ando, and Tsutomu Nihe. And it shows. Manifold Garden is fun, beautiful, and relaxing. Despite having to flail a bit before figuring out where to go next, it’s an artistically sound physics puzzle experience that will take you for an infinite joyride.

Manifold Garden is fun, beautiful, and relaxing. Despite having to flail a bit before figuring out where to go next, it’s an artistically sound physics puzzle experience that will take you for an infinite joyride.