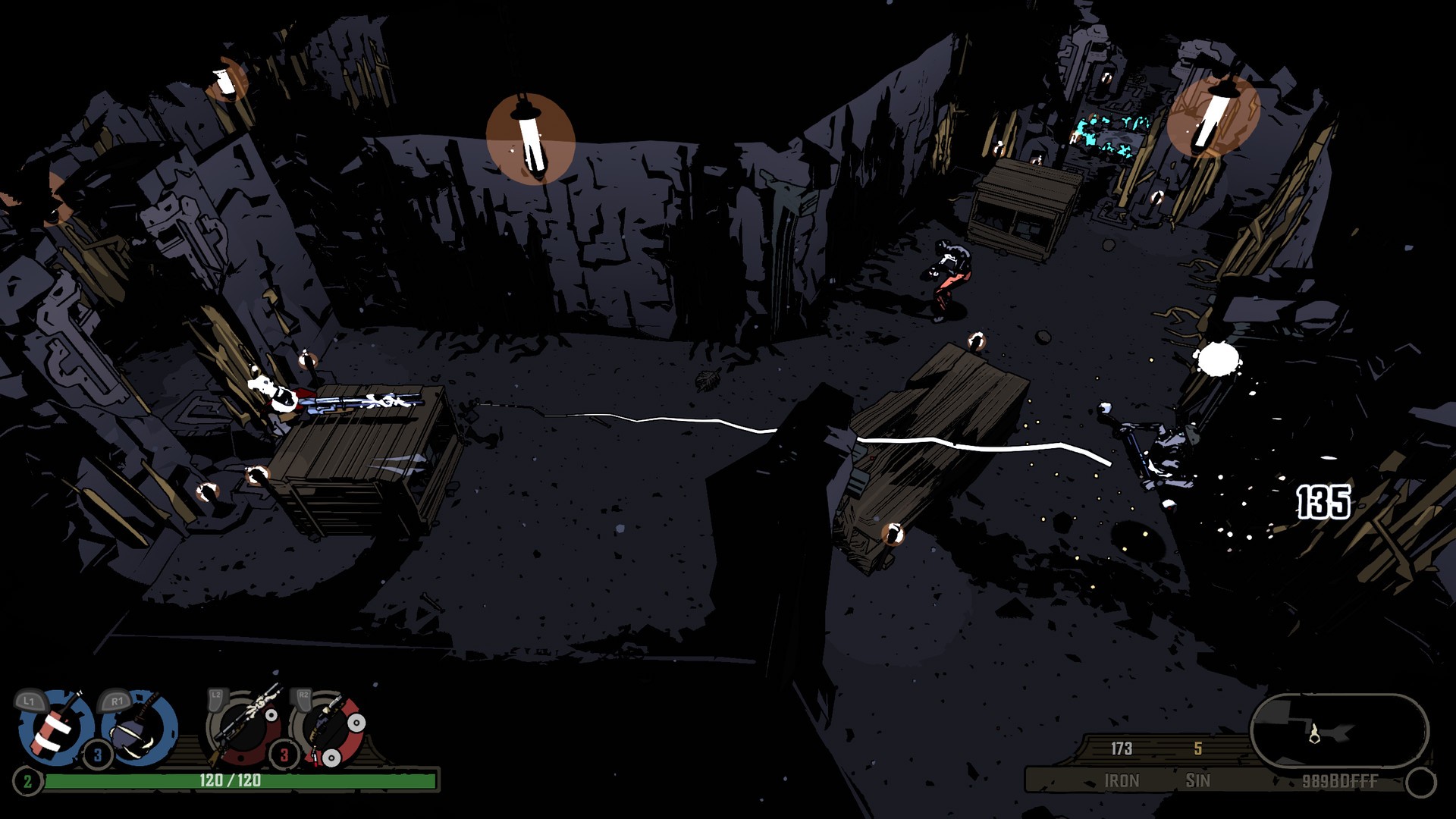 Raw Fury is becoming one of those labels that I’m noticing more and more. When they had their name on some of the coolest indies from the last couple of years, I didn’t think enough of it. Sure, Dandara was exciting in its own way, and I enjoyed my time with both Bad North and GoNNeR, but they didn’t leave enough of an impression on me. Kingdom is a fantastic game, no doubt, yet I left the title fragmented in my memory, not remembering where or who it came from. It was only with the latest release, Atomicrops, that I realized that Raw Fury had a certain finger on the pulse of gaming that could thrum in a way to keep me engaged and excited. Roguelite, progressive twinsticks are, straight up, my favourite kind of game, and I’m happily on year seven of trying my hand with irradiated crops. Now, Raw Fury has called my attention yet again, and this time the game even goes a bit outside my comfort zone with a focus on tactical approaches combined with fast-paced violence and procedural, progressive gameplay. In short: it’s a hell of a ride.

West of Dead stars Ron Perlman, who may have a name for his character, but I always just focus on the fact that it’s Ron frigging Perlman. Ron voices a skeletal, Ghost Rider-like entity named William Mason, who is dead but stuck in Purgatory. No big deal. It happens to the best of us. However, some important notes occur to me. One, it seems that there’s currently some interference within the Afterlife, and every soul is stuck in Purgatory. Seems a dude named Preacher is now heading up affairs, and won’t let dead people shuffle off this mortal coil, which is causing spirits to become…odd. Mutating into demons, shooting at each other, the whole shebang. Oh, and for other reasons that probably make sense to someone, the entirety of Purgatory is now a shadowy, labyrinthian version of the Old West. The whole thing is done up with cow skulls, ponchos, dudes in what looked like Civil War uniforms (did I see that wrong?) and the like. Things just keep getting weirder when you die in the Afterlife and then come back, finally making it clear to all: something is very, very wrong.

West of Dead plays out as a mildly isometric twin stick shooter with procedural generation and forward motion, though both run-by-run upgrades and overall upgrades. You always respawn in the saloon that acts as a “welcome” area for the departed souls and then have an opportunity to pick up two weapons (randomly chosen) before venturing into the halls of the dead. Here, anything that moves, seeks to kill you, and will do so in a variety of ways. There’s other ghosts with guns (which also have a variety of shot patterns), ghouls that just try to zombie bite you, jerk ghosts with bundles of TNT they hurl from a distance and more, worse enemies. They take several hits to die, and they don’t like to just wait for you to come and murder them. Rather, even from the first room, you realize you’re dealing with very active, very ornery spirits, ones who are actively thinking how to dispatch you as fast as possible, and are immune to friendly fire: don’t think that the dynamite blast is gonna hurt anyone but you. 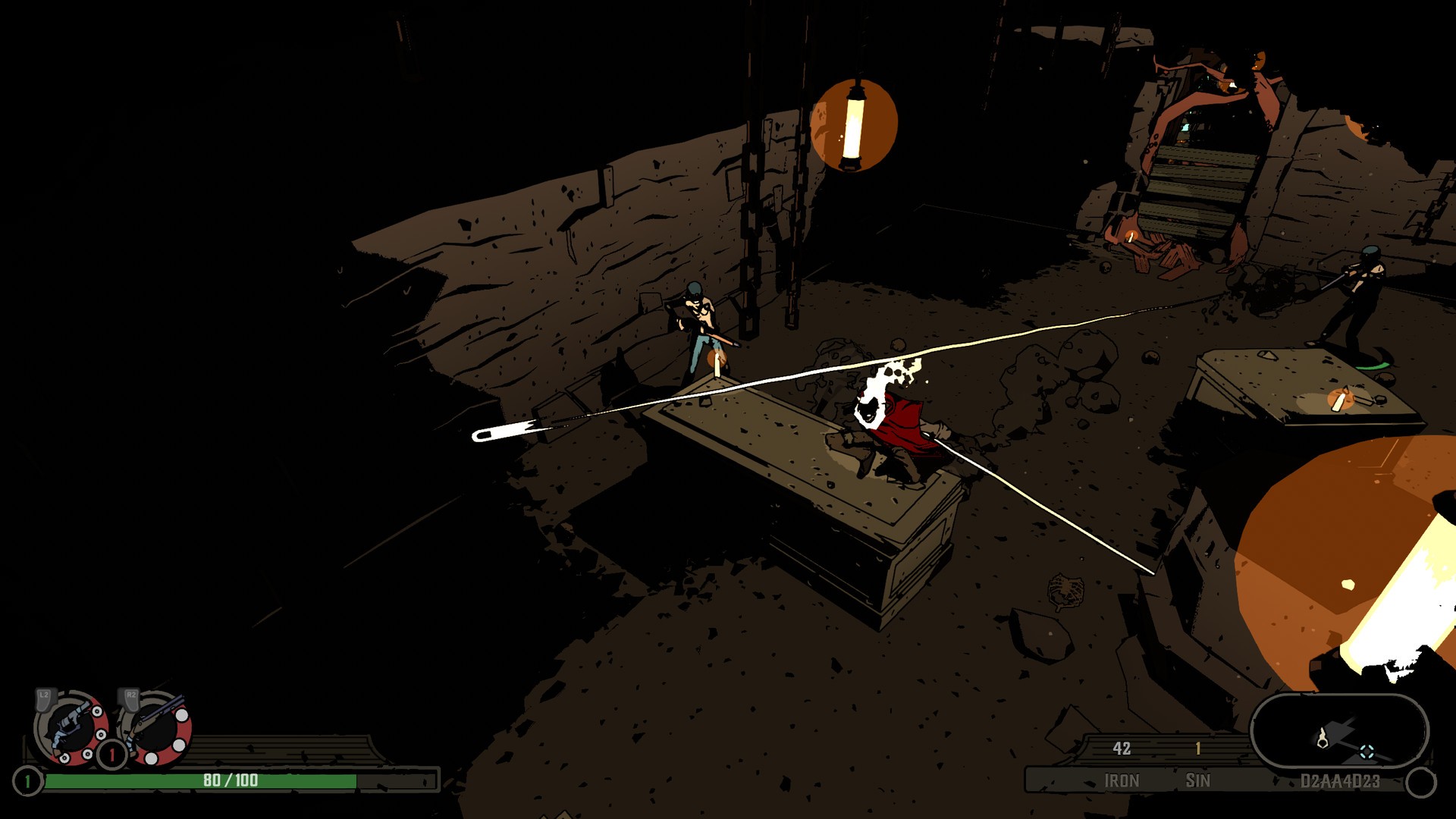 As a result, West of Dead becomes a real thinking person’s twinstick, which is rough because you barely have time to think as the game unfolds. Most rooms will have cover for you to duck behind, which is well and good, but the cover will, over time, disintegrate under fire. All weapons have their strengths and weaknesses: rifles need time to line up a shot, pistols are fast, but underpowered, and shotguns need to be closer to be effective while also having a smaller reserve for ammunition. Bullets are an infinite resource, but shooting isn’t as you need to allocate time for reloading, which can be that much slower when you’re actively dodging and jumping out of the way. Rooms sometimes have lanterns which can ignite and temporarily blind the enemies, but you only get a couple per room, if that. It becomes a tactical shooter, of sorts, asking you to figure out how you want to approach the room and dispatch things, usually not giving you enough clues as to what is waiting to really gauge the right result. Still, you have certain resources at hand, and you can usually think on the fly.

See, this is something that I really liked about West of Dead. When all I was finding was shotguns, the game turned into a weird, berserker sort of title, where I would run in, blast the hell out of whoever was closest, and then try to hide behind a pillar until I recharged. Getting rifles meant turning into a new version of Mutant Year Zero with a faster, more aggressive timeline, where I kept revealing myself to fire off a couple good shots before disappearing into the darkness. Ending up with dual pistols or my personal favourite, the lucky five strike, meant revisiting some of my techniques from My Friend Pedro, where I became a kinetic dervish of death and speed, trying hard to keep moving and getting in my shots without getting winged too many times. When you throw in the fact that you can find different skills or abilities that add to your firefight (like faster reload times), the game becomes downright chaotic, and I loved it.

Fans might notice a few similarities to Dead Cell within West of Dead, and I think it’s alright, nothing too heavy handed. You can get Sins from certain enemies, and Sins are used to unlock new weapons and abilities through a Witch Doctor who waits for you at the end of each level. There’s also a giant cask of heal that you can quaff from before heading to the next stage, which will also refill your health flask (once you unlock one). Yet that’s really not a huge stretch to incorporate into a game like this, and hardly unoriginal: it just struck me because I do play Dead Cells regularly. But everything else feels a bit more independent. Buying weapons with iron ingots that enemies leave behind. Finding scattered Voodoo shrines that can improve one of your passive traits (health, strength or agility) and make the run that much more successful. Alright, I guess there are a few similarities, but I don’t mind: Raw Fury is doing it differently enough to make it stand apart. 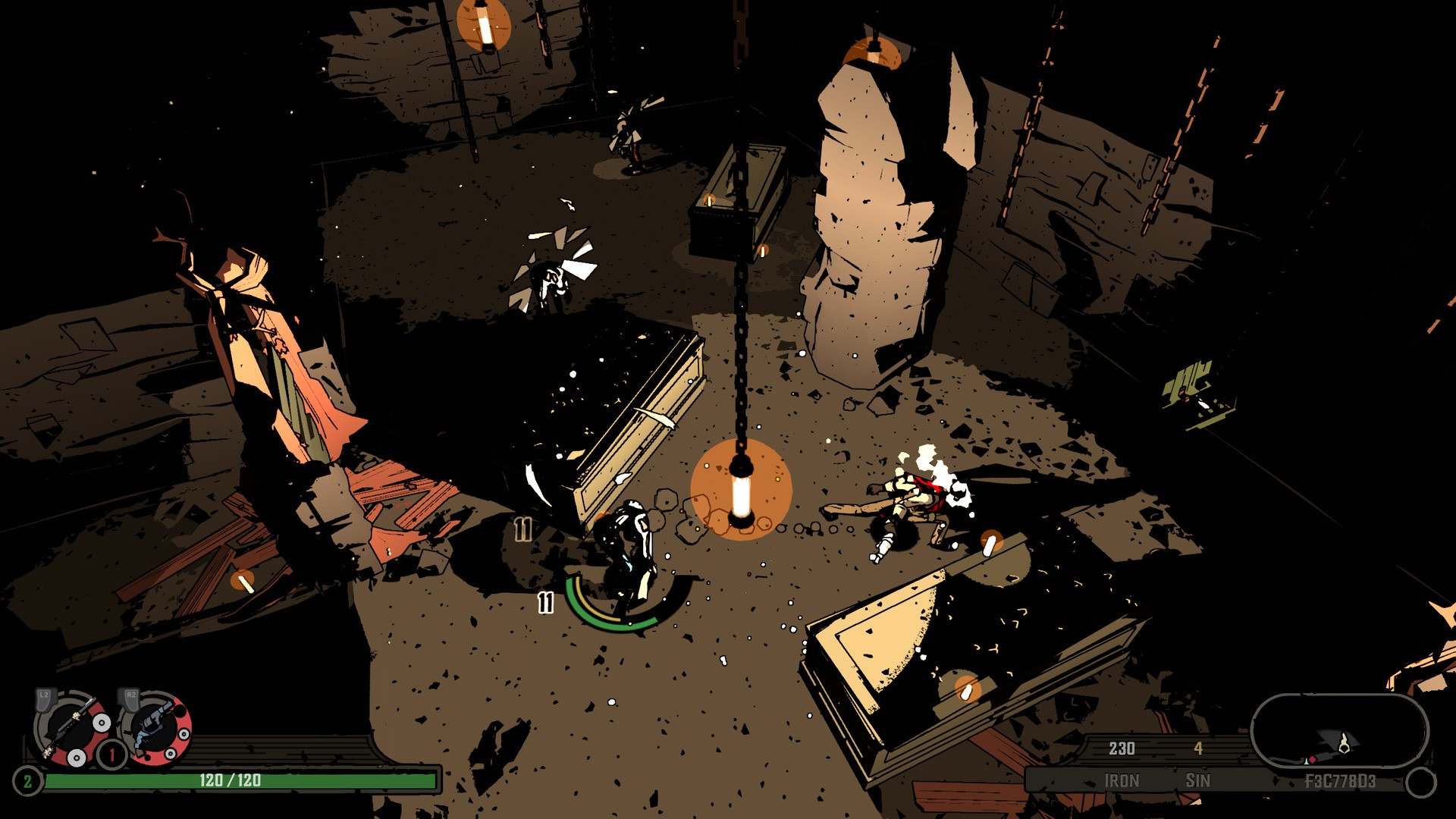 Speaking of standing apart, the aesthetic of West of Dead might be something to consider when thinking about this game. In the audio department, we’ve already covered the biggest pull: Ron Perlman’s voice. He’s got this fantastic quality that helps to bring you into the mind and soul of William Mason, even though his expositions are scattered and far from cinema-length dialogue (at least at first). There’s a tonality and a gritty, tired nature that gives a specific voice to this undead protagonist, something that pulls you between Sam Elliott and Logan Cunningham (the narration voice of Bastion). It helps to meld well with the overall soundscape, which mixes the explosions, unearthly growls and mystical effects with some very lonesome, foreboding guitar. Raw Fury did an excellent job of capturing the traditional “barren townsquare with tumbleweeds” audio feeling, and it echoes throughout the different game chapters without being repetitive (you’d be surprised how many ways you can convey “showdown” in this medium).

As for the visuals, this one was sort of a mixed bag. On the one hand, West of Dead gives that proper underworld feeling through shadows and corners. You wouldn’t expect a Purgatory that’s started to entropy to be well lit or at all pleasant, and that’s presented well. There are so many places for enemies to hide in plain sight, places for you to find yourself cornered, places where the momentary advantage of activating the light flares can be quickly diminished by revealing your own location. On the other hand, the enemies ALWAYS know where you are, even if you can’t see them, so that doesn’t seem totally fair. Additionally, the darkness can be a little heavy on the handheld screen, even with good lighting. Players who are looking to do long stretches and anything after Chapter 1 might seriously want to consider docking and playing up on a big screen that has decent blacks in terms of tone. The strategic approach gets more serious the further into the game you go, and it makes little sense to end up ending a run because you got capped in the ass by a soldier who was right behind you and you couldn’t notice him in time due to errant glare. It’s not a fallacy of the game, but rather of the Switch itself: ask any Binding of Isaac fan who played Curse of Darkness in handheld, it’s a damn nightmare.

West of Dead is the roguelite for players who like to do just a bit more with their game time. It’s got the chaotic chances and randomly generated designs, but the inherent approach and the success ratio cares far more about your thinking than your wanton gumption. If you run in there with guns blazing, you’ll be just another dead cowboy in a whole realm of dead cowboys. If you take your time, consider your actions and then deal out justice like a Phantom Rider, you’ll be knocking down the Preacher’s door in no time. It’s a fantastic experience, and another fine addition to my collection of excellent twinsticks, plus a new stone on the Raw Fury pile. Be safe out there, partner, and good luck dying.

The dead never rest easy when there’s fightin’ to be had.