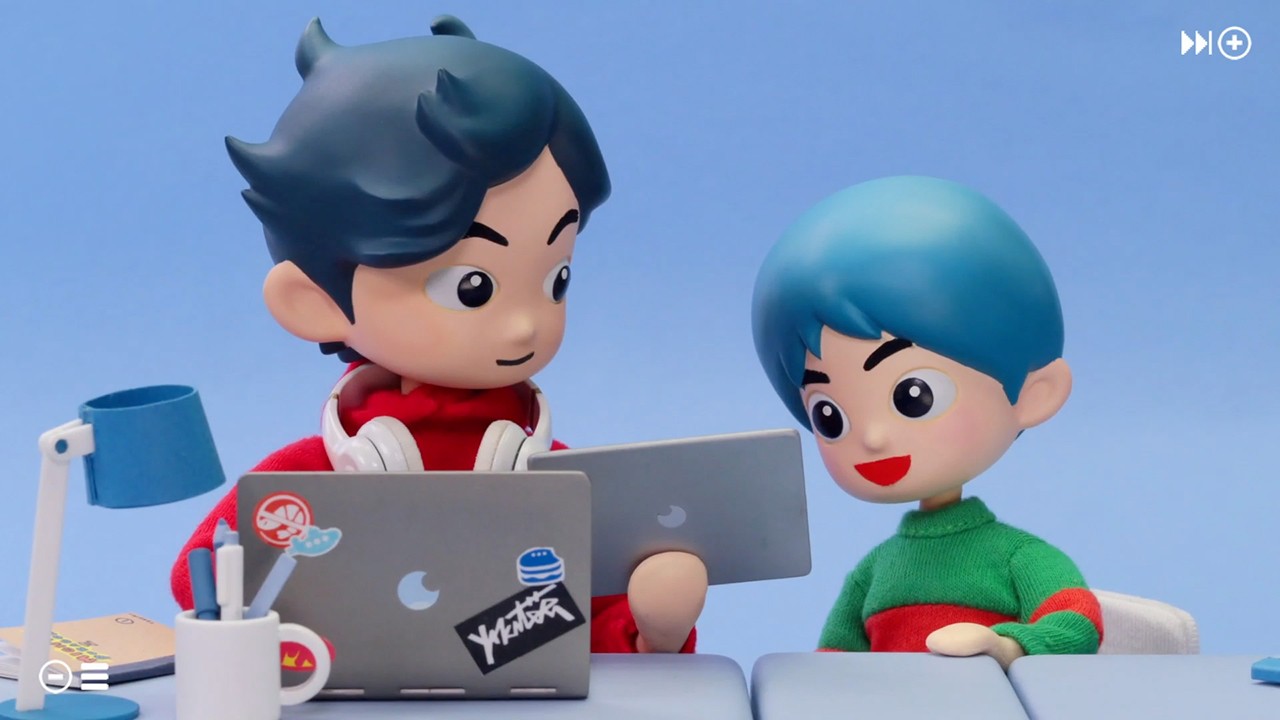 Takeshi and Hiroshi is a very nuanced story about two brothers, lovingly told through stop-motion animation. Immediately I fell in love with the story element of the game, but it was let down by the actual gameplay – a 2D action game within a game created by one of the brothers.

Takeshi is a Junior High student who has a penchant for developing his own games and tests them on his younger brother, Hiroshi. As their father is no longer around, their mother works hard to support them, and as a result, Takeshi’s role is a nurturing one, often boosting his younger brother’s morale as he has frequent stints in hospital. This part of the game, the story, was very heartwarming, and Hiroshi’s maturity and selflessness to entertain his brother are endearing. It’s also quite a remarkable feat for someone his age to create his own game with brilliant graphics and gameplay, in context. As for playing the game, he makes as a gamer; I found it a little underwhelming and a distraction from the core part of the game.

The game played over a half a dozen or so chapters is Mighty Warrior. It’s a role-playing game of sorts where players start at level one, and through skirmishes, improve their HP and strength. You have no say over the stats, but you get to choose who to fight. There’s one sole purpose of the game, and that is to ensure that Hiroshi is invested and happy in playing the game. This is measured in the HUD with Hiroshi’s stress levels – the higher the level, the greater the chance you’ll complete the goal: his satisfaction. 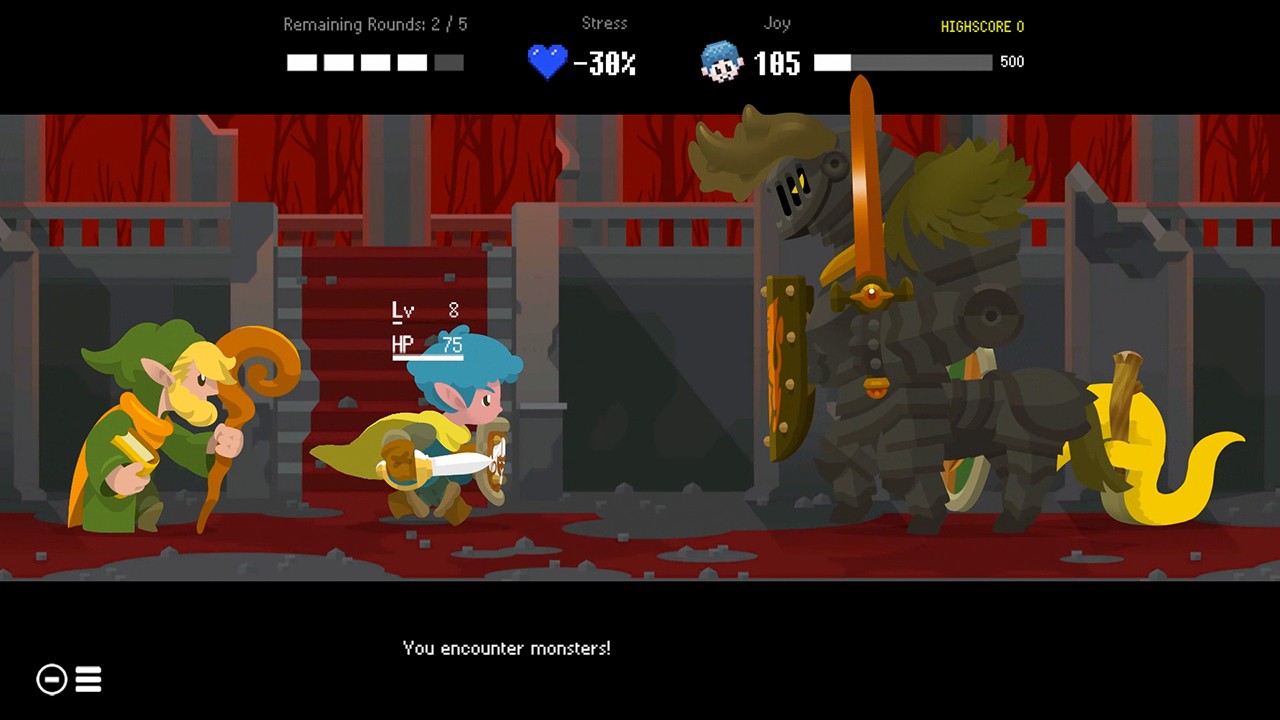 Each enemy you encounter has a strength and weakness, and as you progress, you’ll learn new moves. It’s up to you who to fight to fast track your progress and to keep Hiroshi happy. While the focus is on the younger brother’s happiness, he’s far from a brat and genuinely appears to be satisfied, his spirit lifted each time he plays the game. Interestingly, the game isn’t finished, and instead, Takeshi adds elements to it per chapter based on the influence on the outside world. The first introduction was a new character that resembled Skeletor, armed with a bow. Anyway, back to the gameplay bit again.

You can fight one enemy or loads at once. As a turn-based game, if you so desire to fight four characters at once, you’ll be hit four times consecutively, it’s apparent that you need a strategy for survival. If you die you restart the level again, or if Hiroshi isn’t satisfied, the same thing. You could say that picking an easy line-up is the way forward. At first, it is, but Hiroshi soon clocks this method and gets bored, and you’ll start getting minus points.

The gauge for his satisfaction is simple: attempt to fight a challenging opponent(s) and survive and his stress levels increase – the higher the number, the faster you reach the overall target of satisfaction, a.k.a his joy. Each stage is conducted over five rounds so if you smash it in the first three, but decide to go for a slightly easier opponent, Hiroshi gets bored and that deduction of points comes off the final tally. You have to plan your attack. At the start of the game, I encountered an ogre who would one-hit-kill me, but by the time I got to Chapter 3 and attempted to fight him, I killed him in a surprise couple of hits. To reflect the challenge, Hiroshi was bored, and I lost points off his joy gauge and had to restart the level when I had got to the fifth round. It was pretty frustrating, but encouraged you to think out a strategy to keep him happy, but to survive at the same time. 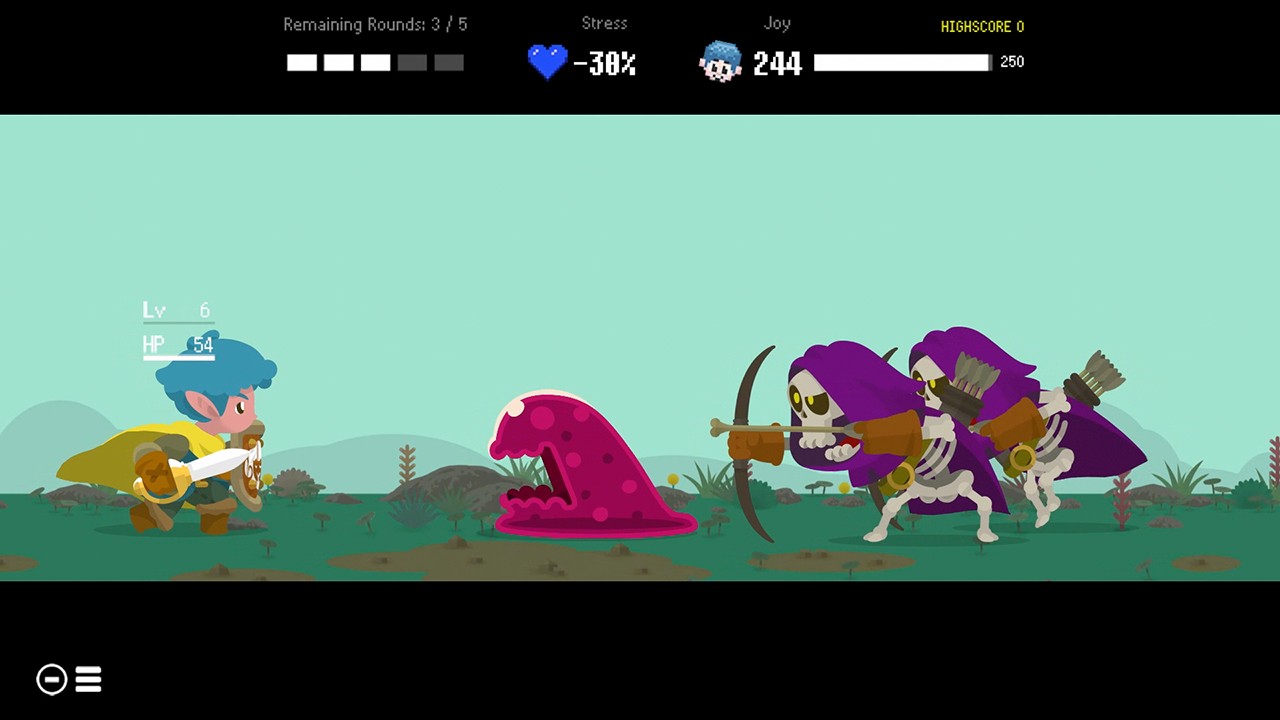 As mentioned, the gameplay sections were a bit of a letdown. While there’s a strategic plan, it was just a little repetitive to find any real joy out of it, and unfortunately countered the feeling of the story. If this were a visual novel, it probably would have flowed a little better without the game interrupting the narrative. Cut back to another story sequence, and it melts down any hostility to the game, only to resurface once more when you’re doing the same thing again, only with a new trick and character to two. If this were real life, then it would be amazing. A Junior High student tweaking a game each night that could be played on a tablet almost in real-time, but alas, it felt too much like a tablet title of its own, better suited as a mobile app or similar – which, coincidentally, it was first of all.

Takeshi and Hiroshi is a gorgeous looking game and tells an adorable story between two brothers and has a charming art style by using stop motion animation – something we rarely see in the gaming world. But it’s the bits in between the storytelling that put me off a bit in a game that I finished in one sitting. Would I go back and play it again? For the story element, yes, but while the game-within-a-game wasn’t terrible, it was too much of a chore to be in the same league as the narrative.

Probably best suited as an interactive app, Takeshi and Hiroshi is a beautiful story that may introduce younger players to turn-based battle. Still, for everyone else, it might be a little forgettable if it weren’t for the gorgeous stop-motion storytelling elements.