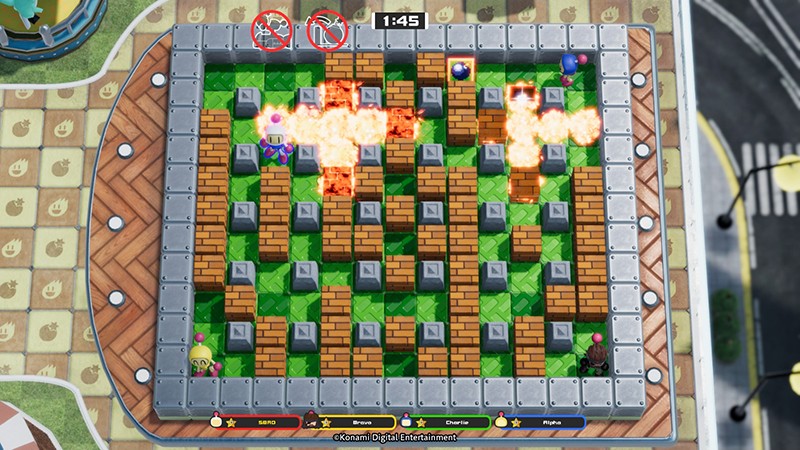 Believe it or not, Google Stadia is still there with its hamster running the wheel of its game streaming service. Say what you like about Google Stadia, I think it’s a very underrated platform which is unfortunately struggling to get off the ground due to the competition. Things have been extremely quiet for the platform recently as they regurgitate and release games that have been on other platforms for some time, albeit with a couple of exceptions.

One of those exceptions is Super Bomberman R Online. Another “First To Stadia” title that gives players on the platform their own little exclusive to boast about for a bit. The great news is that if you’re a Stadia Pro subscriber, then this is part of the September 2020 free games that you can claim. This is clever from both Konami and Google Stadia as it will ensure the servers are busy. There is one thing that Google Stadia is lacking and that’s players of the online community, so this is a great move.

Bomberman is a series that most gamers will have heard of as their plethora of titles spans across 35 years of the gaming generation, which is as long as I’ve been living. We haven’t seen many iterations in the last decade though, with the last one being Super Bomberman R which spanned across most of the main platforms. Before that it was way back in 2010 with Xbox 360 arcade title Bomberman Live: Blast fest. Super Bomberman R received mixed reviews of which many scored it average.

Super Bomberman R Online follows the same premise as the previous title, but with a real twist. Instead of just up to 8 players battling on the same screen, this instalment will pit you against 63 other players in a Battle Royale type experience. It’s a similar outlook compared to Tetris 99 on the Nintendo Switch. Simply try to survive and be the last man standing. You might be an avid reader wondering how this is compared to Super Bomberman R and saying in your head, well that wasn’t a very good game Jordan. Well let me tell you they have vastly improved on the last and made it a joy to play and I had some serious reservations. 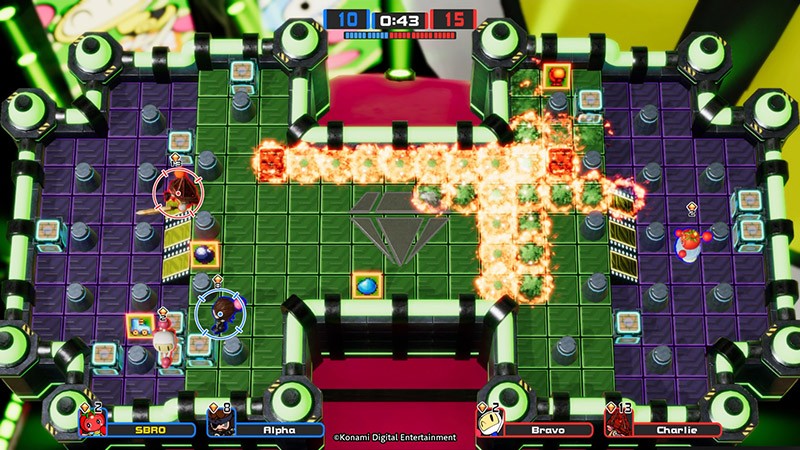 You’d think 64 people playing Bomberman at the same time would be a headache to play. But it functions exceptionally well in the scheme of things. The game splits you up into random groups of 4 battling out in 16 different arenas, rounds last two minutes before 4 arenas are stubbed out of the game. If you’re still alive, then it is up to you to shimmy into the next arena via pathways. If you make it successfully to the next arena, the timer will start again and you’ll battle it out once more to become the ultimate Bomberman. Now if you’ve played the Bomberman titles before you’ll know it’s a case of dropping bombs in the arena hoping to kill the enemy. Negotiate the maze and breakable walls to get close to the enemy. It is fast and frantic and you must negotiate bomb drops and their blast radius and also ensure you don’t make a mistake and blow yourself up.

We’ve never had over ten players in a Bomberman game before. Konami have turned a small casual fun experience into a competitive masterclass. Once those arenas get lost through each round and players funnel and bundle together it really makes for some cautious, on the edge of your seat gameplay.

Graphically I felt that the game has had a really polish up from the previous title and it heads back to the visuals we know and love from the arcade-style titles. Super Bomberman R felt a little too basic and blocky, with not much more to do other than play against 7 others and unlock cosmetics. I secured the premium edition of Super Bomberman R Online which grants some unique skins of characters like Pyramid Head from Silent Hill and Snake from Metal Gear Solid. So this was a lovely touch.

The power-ups from the previous games are largely the same, with abilities for extra bombs, extra speed and blast radius. I think these are toned down to the true arcade titles from the Xbox Arcade games where the end game will give you a blast radius of entire rows. I suppose this was done to balance the experience and not grant players with too many perks. There are character-specific abilities which will keep you and your enemy on their toes, as they will hit you when least expected. 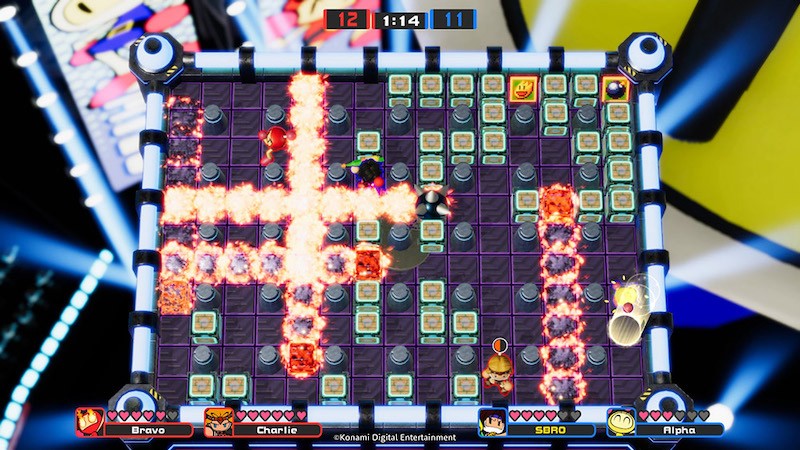 If you don’t fancy getting hyped up to play amongst 64 players, then there are a few other modes that may cater to your tastes. There is a private mode presumably to invite your own friends into. Sadly I don’t have many friends who game on Stadia so I wasn’t lucky enough to try this out. However, the settings will allow you to tone the experience back to the classic times of Bomberman. This also seemingly had the carts going around the sides hurling extra bombs into the mix once players had died. The private function can accommodate up to 16 players, if you’re lucky to have 15 others you know on Stadia then some real fun could be had.

I was very surprised to see Super Bomberman R Online introduce their very own battle pass system, which is titled “Bomber Pass”. As you gain experience through several playthroughs, you’ll unlock cosmetic items, music for the menus, taunts, speech bubbles and more. This really added some incentive to keep playing the game, as it felt like there was some purpose in battling hard through the matches online. The bonus here is it appears to be completely free of charge to work through, a lot of games with battle passes appear to charge for the pleasure.

The only downside I had to Super Bomberman R Online was the long waits for games and that I can only put down to the severe lack of online community on Stadia. Admittedly I was searching for these matches at 2 am UK time and I am not sure if the servers are capped at set regions. This could be a real issue for the game going forwards seeing as it’s driven as an online-only title. Konami could really do with pushing this to other platforms as quickly as possible and ensuring cross-platform and progression are enabled to really drive this to the next level. The game does sometimes fill the games empty slots with bots in order to make up the numbers, but the lack of Stadia players worries me considering it’s a free to claim title for Pro subscribers.

My time with Super Bomberman R Online was filled with nothing but frantic fun and frolics, and I actually adore the game. I’d go as far as stating that this is probably my favourite game on Google Stadia simply because I am a fan of the Bomberman series and there is plenty to play for with this title. The Battle Royale aspect really works with this game and working through the ranking system and Bomber Pass tiers really adds longevity to the game. I hope that Konami allows others to experience the madness on other platforms in the near future as this is a game that deserves success. If you have Google Stadia, I’d urge you to subscribe to the Pro subscription to claim and play it as you will have incredible fun. There could be some minor improvements such as some explanation to what the character-specific abilities actually do and the uses for them. Also, the AI bots aren’t very intelligent and could be made to be a bit more challenging and reactive. Sometimes they just appear to stand there and let you block them in with a bomb. All in all, though, I went in with low expectations and came out of this with a game I genuinely want to keep returning to because it is honestly brilliant. Bravo Konami for evolving an average project into a magnificent one.

Super Bomberman R Online is an evolution of the core Bomberman experience with a mix of Battle Royale, the result is endless fun and chaos