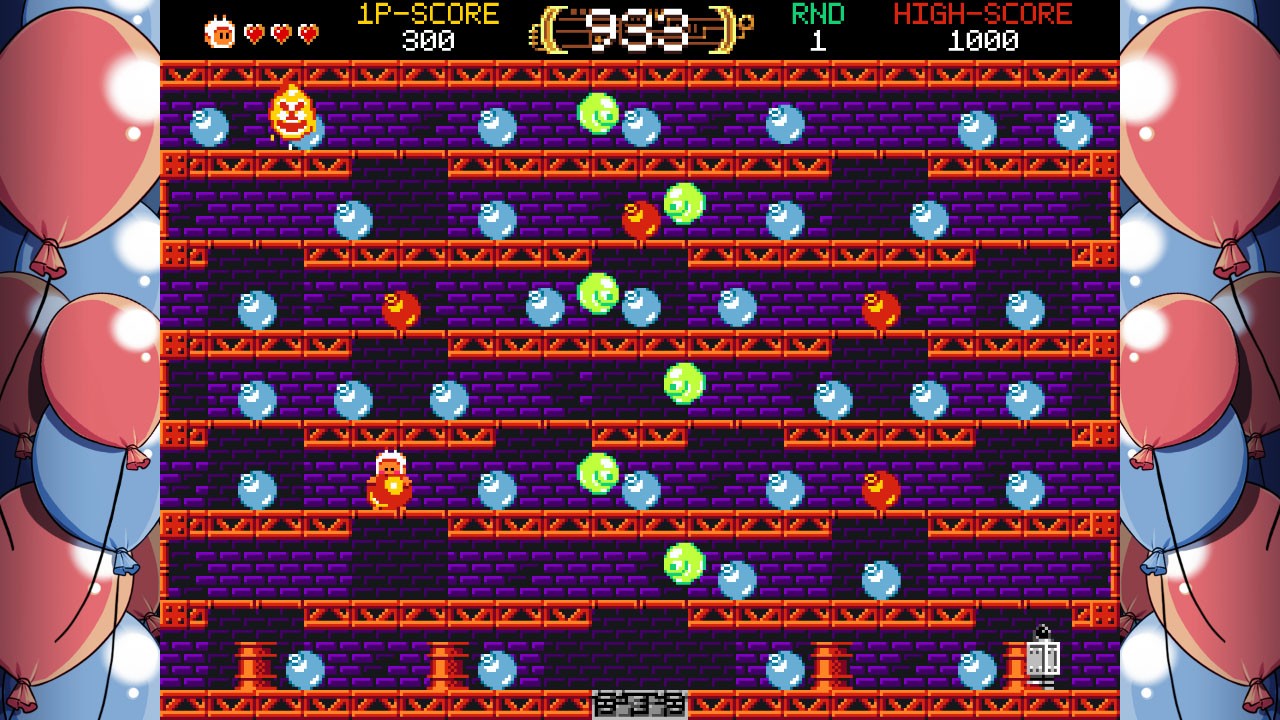 Tamiku (created by Josyan, published by Rataliakia and EastAsiaSoft) is the difference between an homage and an imitation. When we think of homage games, they incorporate a lot of elements and ideas from other genres – usually retro games – in crafting a modern idea. Sometimes they appear more as a satire or pastiche, directly copying specific ideas and notions from existing game tropes in order to invoke a lot of nostalgic feelings or ideas. However, you have to be careful not to trace the lines too closely: if something is a direct copy of another idea, just with a fresh coat of paint, it feels like a forgery instead of a nod to the game, and Tamiku is dangerously too close to that line.

The concept is simple and enjoyable enough: Tamiku is the titular character, an alien who loves exploding balloons. No worries, that’s a perfectly normal trait, or at least one that isn’t too harmful to others. Tamiku will break into a series of sixteen levels across eight worlds and destroy all the balloons that he finds in different buildings/factories, much to the chagrin of the guard robots who reside there, and they will try to stop him. Tamiku has no offensive moves and only focuses on getting to the balloons, running over them to explode them, and occasionally mashing the A button for a particularly stubborn mylar. Continue to run around and pop balloons until the game is finished. That’s all. There’s Tamiku. 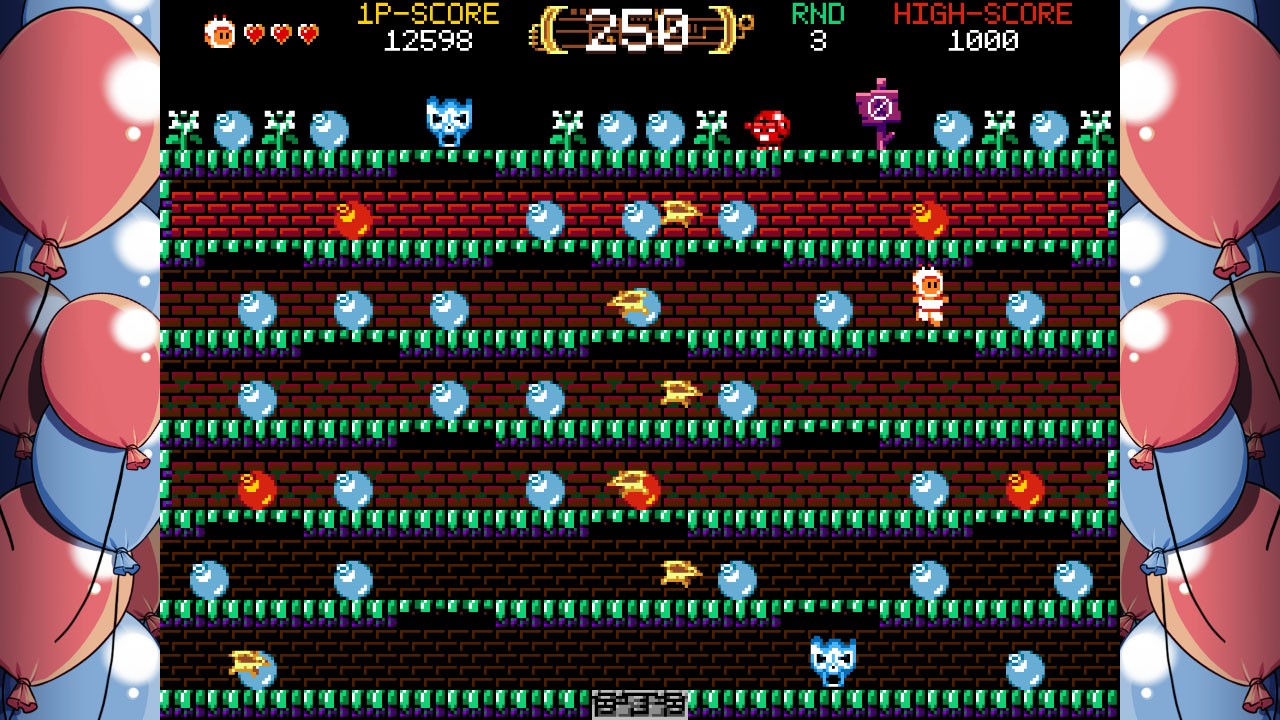 Now, it’s important for a game as simple and short as this one to really work on its polish, and that’s a double-edged sword for Josyan. On the one hand, the Tamiku presentation is, in a word, excellent. The graphics and design of the levels are straight out of the classic arcade handbook, with memorization patterns for AI, a variety of monsters that have different movement tactics, and even enough spacing on the balloons to make it a challenge to get more than one at once. With ghosts that fly up from the ground, straight lined drones and motion sensing monsters, it makes sense to need to adapt to the game in order to properly play it. You see the different levels unfold before you with different tropes of landscape (industrial, ice, etc.) and you adapt as such. The sprites are all familiar without being too on the nose for what monsters that may have inspired them (except for one dude who looked like a Pac-Man ghost). The colour palette is wonderful, and the whole thing can be overlaid with a CRT filter to give it that umph. It has the right visual appeal, and the ticks don’t end there on the sheet.

The music of Tamiku is a straight banging soundtrack of nostalgia and inspiration. Think Mappy-Land. Think Balloon Fight. Think Kickle Cubicle and Clu Clu Land rolled into one, and you’ve got the soundtrack for Tamiku. I don’t know how the dev did it, but they captured the most amazing ideas of what it meant to have an arcade, the lightweight soundtrack on an NES and emulated it here, in a new way, and it’s wonderful. It brought me back to my childhood with a series of cheerful chirps and high pitched, but not annoying tones that put be back in a land with a rectangular controller and no school because I faked a cold. Persons who really loved the less complex chiptune sound of the 80s and 90s should totally take a listen, because, while I wouldn’t put it on for everyday tasks, I love the transport that the music takes me on, and that should be admired in and of itself.

When it comes to gameplay itself, Tamiku has one very important but very critical problem: the game is too tight. In spite of the retro graphics and presentation, Tamiku responds and moves very smoothly, very well and very quickly. This sounds like a bizarre complaint, doesn’t it? A game is programmed too well? But think about it for a moment: one of the reasons that the retro games on the NES and Mega Drive era were so difficult despite such silly and simple designs is because there were inherent limitations with how the developers could make the host avatar respond to control input and react in time. Even the famous Super Mario moves quickly, but still stiffly in the first Mario, and I don’t think he really achieves a good 2-D fluidity until Mario 3, or maybe even Super Mario World. Tamiku, on the other hand, is tight as a drum and can jump up or down between the platforms with insane response and ease. He can stop on a dime and move his little alien ass out of the way before danger really is crashing down around you. And it made me realize that I shouldn’t be as good at Tamiku as I was. 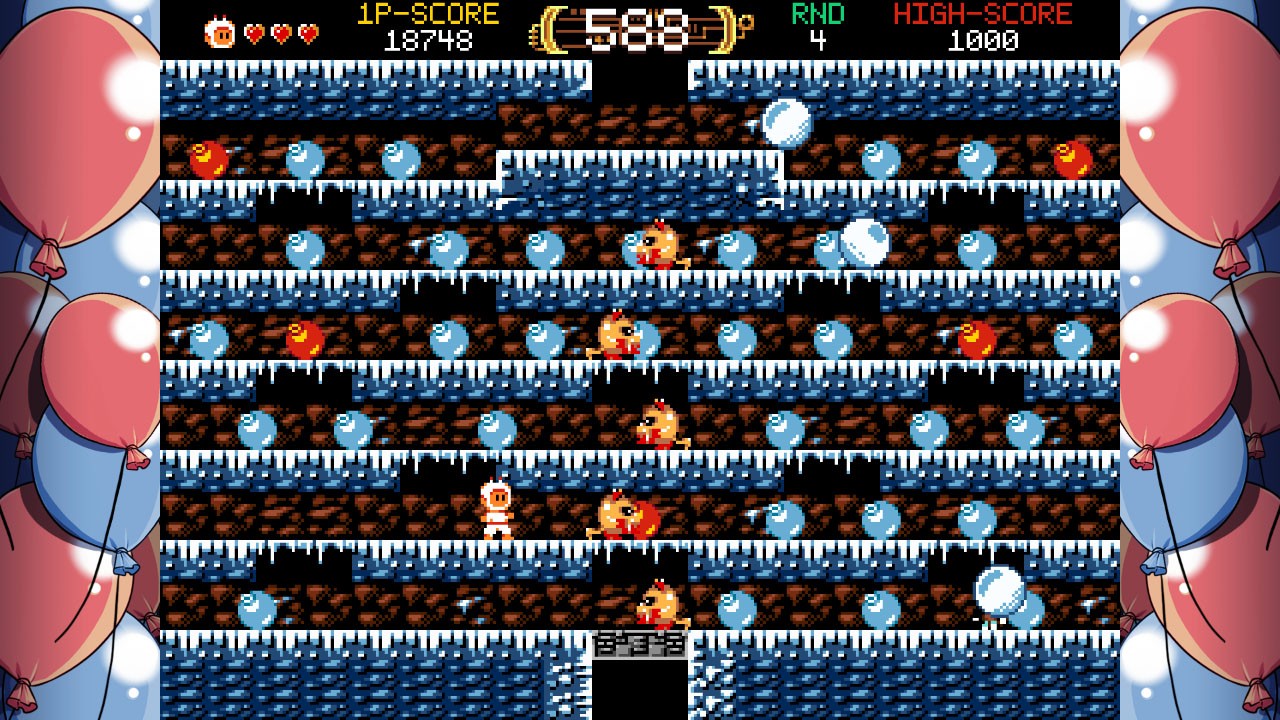 That’s another weird thing to complain about, but this isn’t some time-wasting mobile game where I’m waiting for the dentist to come and get me. This is a console game that’s on the same system as some of the biggest names in both today’s and yesterday’s games, and here’s Tamiku. Looks like old, plays like new, and confuses both parties. You’ll be able to blow through this game in under an hour, and then you’re really left with nothing. It’s too on-the-nose for an arcade retro experience without the childhood ties that’ll keep you coming back for more. The only way that Tamiku can make a staying impact is if this is someone’s first game and they’re also a child, and there’s not a kid born today that’ll turn away from Minecraft and Animal Crossing in order to play this title first, not even if a parent forces them to.

I liked Tamiku, but I also disliked it for all the reasons I just noted. It looks fabulous, the music is great, and the price is right, but once it’s done, it’s done. There’s not enough nostalgia to make it memorable, not enough difficulty to keep it active on the system, and not enough of anything to insist that others play it. If you’re really curious about the music, you can probably find it somewhere to listen, and I’m hesitant to recommend a non-musical game just for the soundtrack. Tamiku: it’s alright.

Tamiku certainly has the retro flavour in appearance and sound, but it lacks the special sauce to make it a truly memorable title.