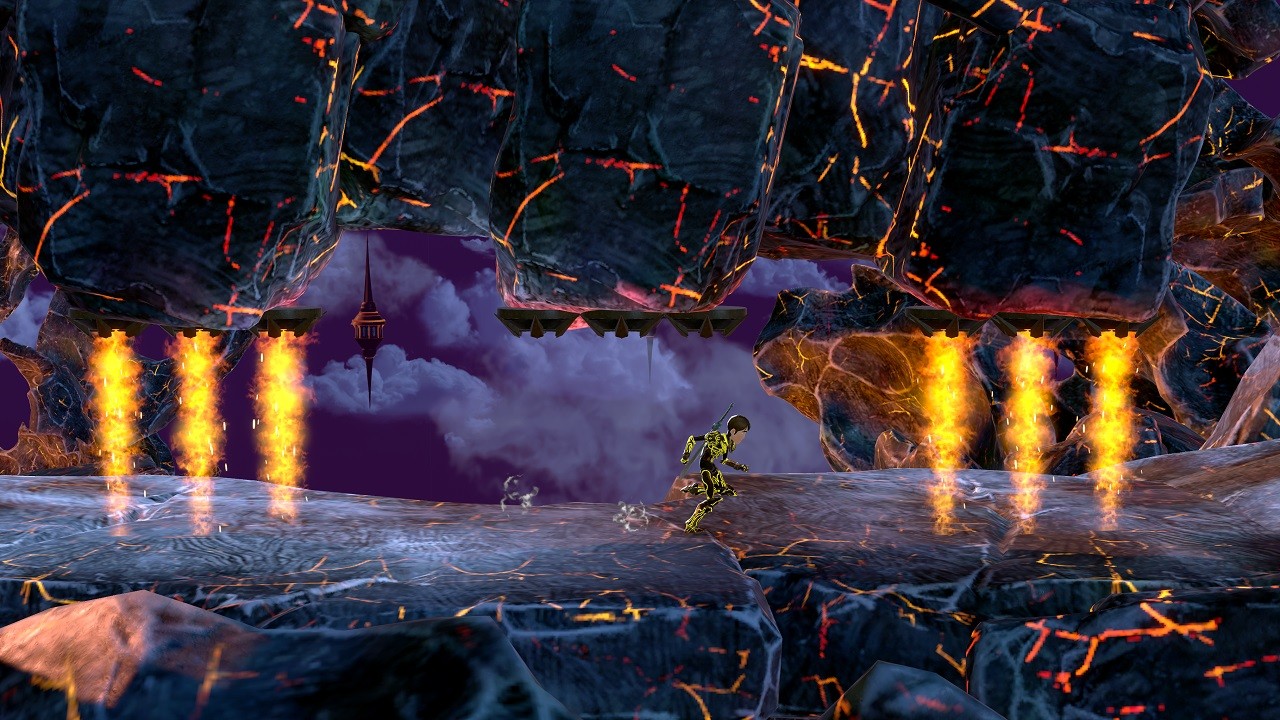 Let’s be honest – licensed video games spawned from movie and media franchises rarely leave a good lasting impression on those who’ve decided to take their hard-earned money and spend it on said games (unless you’re a parent looking for a cheap game to buy your kid with a recognizable enough cartoon character on the cover). More often than not, licensed video games are rushed, void of any memorable gaming experiences, and eventually ends up as discount bargain-bin shovelware. In recent years, though, we’ve seen a somewhat significant decrease in the number of licensed video games that plague shelves – obviously, Trollhunters: Defenders of Arcadia attempts to defy that. Developed by veteran studio WayForward and published by Outright Games, Trollhunters: Defenders of Arcadia is based on the Netflix series created by Guillermo Del Toro and produced by DreamWorks Animation – some big names right there in one sentence already. Is the game itself worth the asking price, however? Let’s take a look!

I’m gonna be honest here and admit that aside from some ads and trailers, I have not seen Trollhunters itself, which is to say that I will experience this universe and characters for the first time. Story-wise, Defenders of Arcadia branches off from earlier events in the show. You’ll encounter characters from the series and play as Jim Lake Jr, the main protagonist of the story. Jim and his friends must put a stop to the chaos caused by Porgon, a mischievous troll with access to a powerful time-travel device. Fans of the series will certainly enjoy playing as Jim (as did I in my younger days when playing licensed games) and revisiting many of the places and events from the Trollhunters series. Newcomers, however (such as yours truly) might take a while to catch up to what’s happening, but of course nothing that a simple Google search can’t fix. It’s all light-hearted fun and adventure, and if you’re a big fan of the show, then you’ll have fun with the story and references on here. 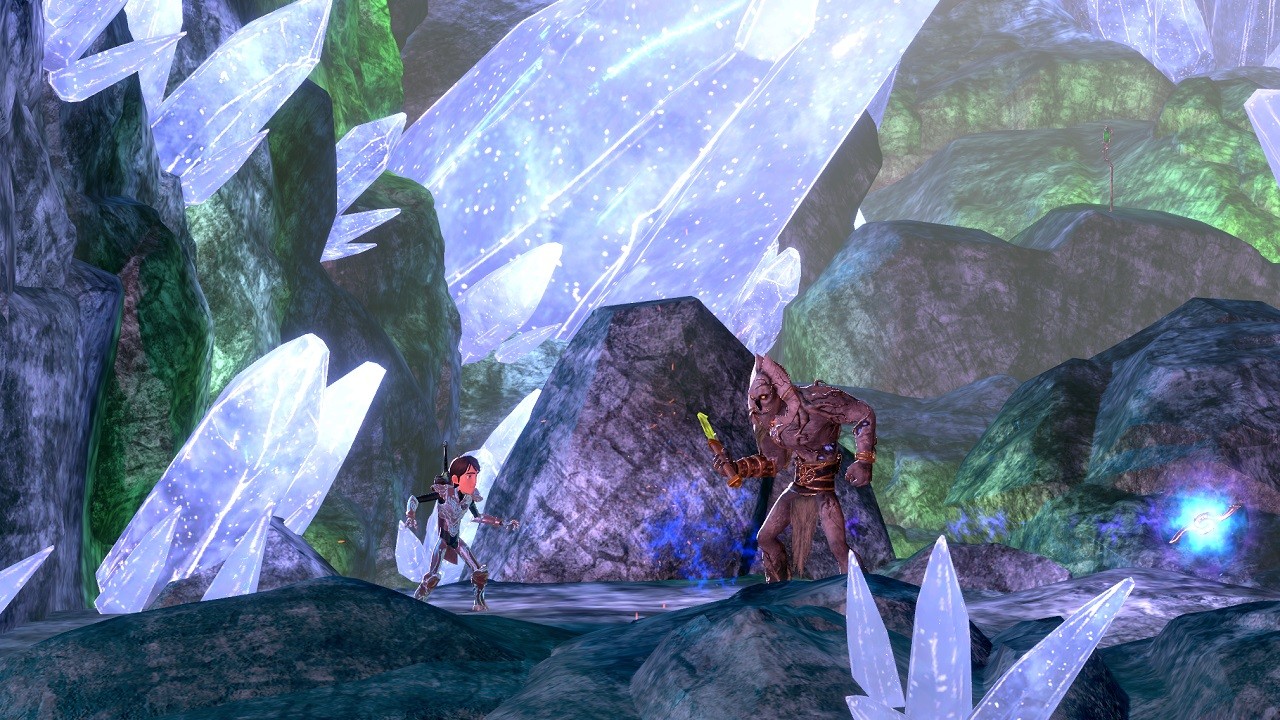 As for gameplay, though, Trollhunters is a rather simple platforming-action game. It reminds me of countless licensed side scrollers from the DS days, and the action and combat is pretty straightforward and simple. Each stage will require you to get from point A to point B, while slashing down enemies, collecting credits and hidden items along the way, and avoiding obstacles. Did I mention 1-UPs? Yes, they have it here in Defenders of Arcadia as well. Like I said, it’s standard side scrolling fare, and will either look bad or good from your point of view. For a kid just looking to play in his favourite troll-hunting universe, however, this will be enough.

As per tradition, you must keep your health bar from draining out, both by defeating enemies and avoiding traps and obstacles. Various enemies have different ways of attacking you – most will just run back and forth along a route, damaging you if you get in their way. Other enemies, however, will sense when you are nearby and go out of their way to harm you in particular. Thankfully, you’ll have your sword with you during your adventures. In between stages, you can visit a central hub of sorts where you’ll be able to talk to other characters, check your objectives, purchase items and upgrades, and carry on with the story. Jim’s friends will help him out as well – for example, Toby can aid you by delivering a special attack which will destroy certain walls which are not weakened by normal attacks. Players can also opt for some couch coop gameplay – player 2 can play as Claire via some classic split-screen action.

That said, the gameplay is quite basic though – so don’t expect any Samus Returns or Symphony of the Night-level side scrolling action on here. 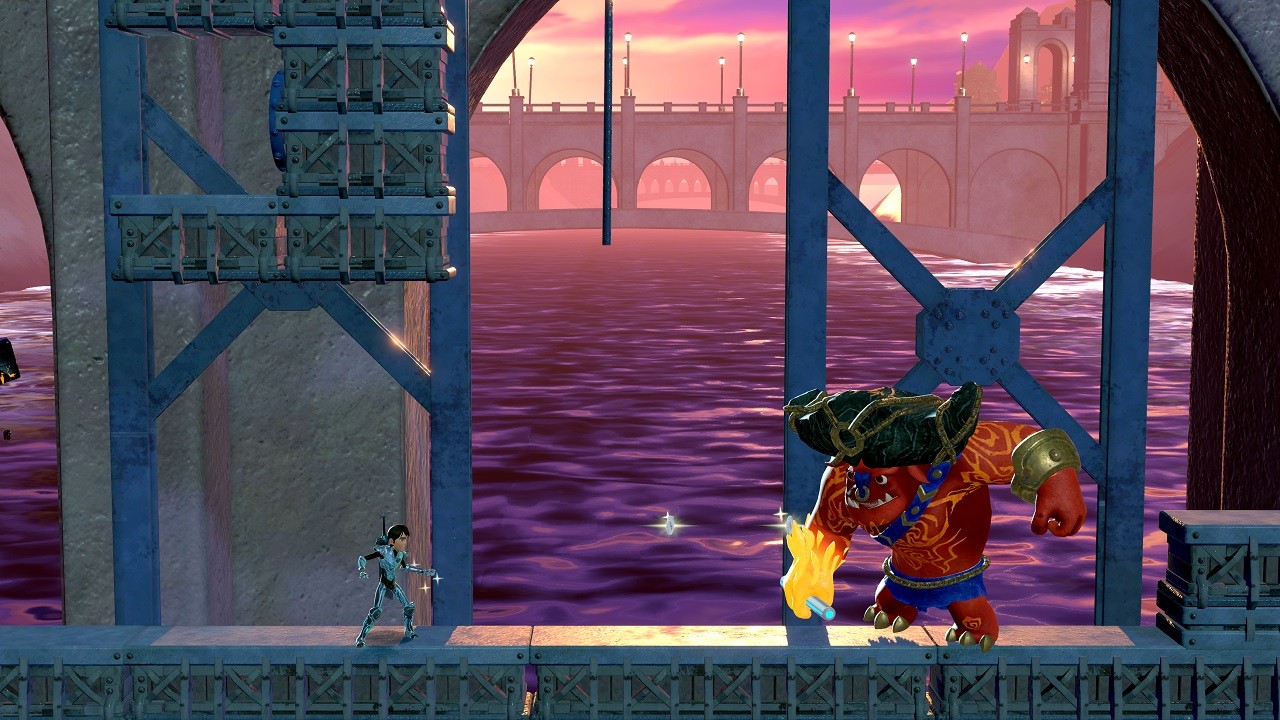 Being produced by DreamWorks Animation, the Trollhunters series certainly looks good on screen. And while the game doesn’t exactly look terrible for a modern title meant to be played on a modern system, I can’t help but feel that a little bit more polish would have helped the visuals out a bit. Sometimes the graphics remind me of any number of DS or PSP games, although I can say for certain that there are worse-looking games than Defenders of Arcadia. As for sound, we do get some cinematic scores during levels, as well as some great voice acting, and that’s always a plus for me.

So is Trollhunters: Defenders of Arcadia worth your cash? Well, for fans of the franchise looking for a way to explore the Trollhunters universe further, then this will give you some entertainment. The game looks good, adapts many of the story and characters, and younger fans will definitely get a kick out of this casual affair. However, if you’re looking for something more challenging, or if you’re not all too familiar with the lore as presented in the animated series, then you might want to look elsewhere for now.

Fans of the Trollhunters franchise will get some entertainment out of this one – but gamers looking for more depth and challenge might want to opt for something else.