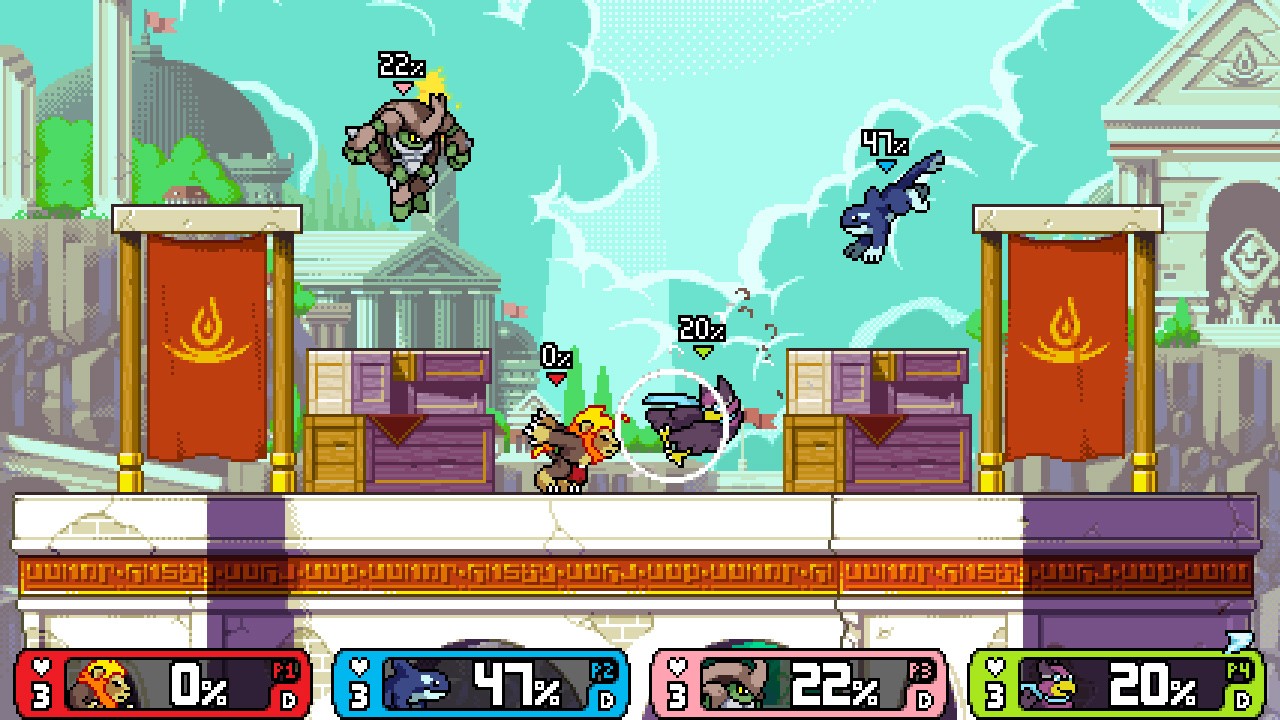 It takes a really special fighting game to remind me that I am trash. I like fighting games, I really do, but I have little to no strategy for any given game that I play. Most of the time, I like to find the one move or throw that I think is best and just spam the shit out of that until the match is over. It’s why I always played as E.Honda, as Baraka, as Chaos or as Sophitia. When it comes to Smash, I play as whoever I think is cute at the moment because I know I’m gonna lose, so might as well do it while looking good. With the upcoming release of Minecraft characters in Smash, it’s become abundantly clear that fighting games don’t need to adhere to a single logical rule ever, as long as they look and feel good. Ladies and gentlemen, please allow me to introduce you to Rivals of Aether, the indie masterpiece crafted by Dan Fornace, which has finally arrived on the Nintendo Switch.

Rivals of Aether is a 2D fighting game that pulls heavily from the format of Super Smash Bros in inspiration (as the predecessor of Rivals was a fan game called Super Smash Land, this is hardly surprising). You get to choose one of fourteen characters, two of whom are guest stars from other games. Besides original creations like the blade wielding Clarien or the fearsome fire lion that is Zetterburn, we also have visitors: Ori and Sien (from the Ori series) and Shovel Knight (from…well, goddamn everything). Like Super Smash Bros, there are a series of ways to play and approach this fighting game, but the core elements are there. You need to knock your opponent far enough out of the ring for it to count as a total loss, either by getting their damage ridiculously high above 100% and then slamming them into the stratosphere, or hoping you get lucky with pushing them off the ledge and then maybe they don’t recover. This latter hope is really far fetched due to some technical constructs that make Rivals far different from a Smash clone, but we can get into that in a moment. 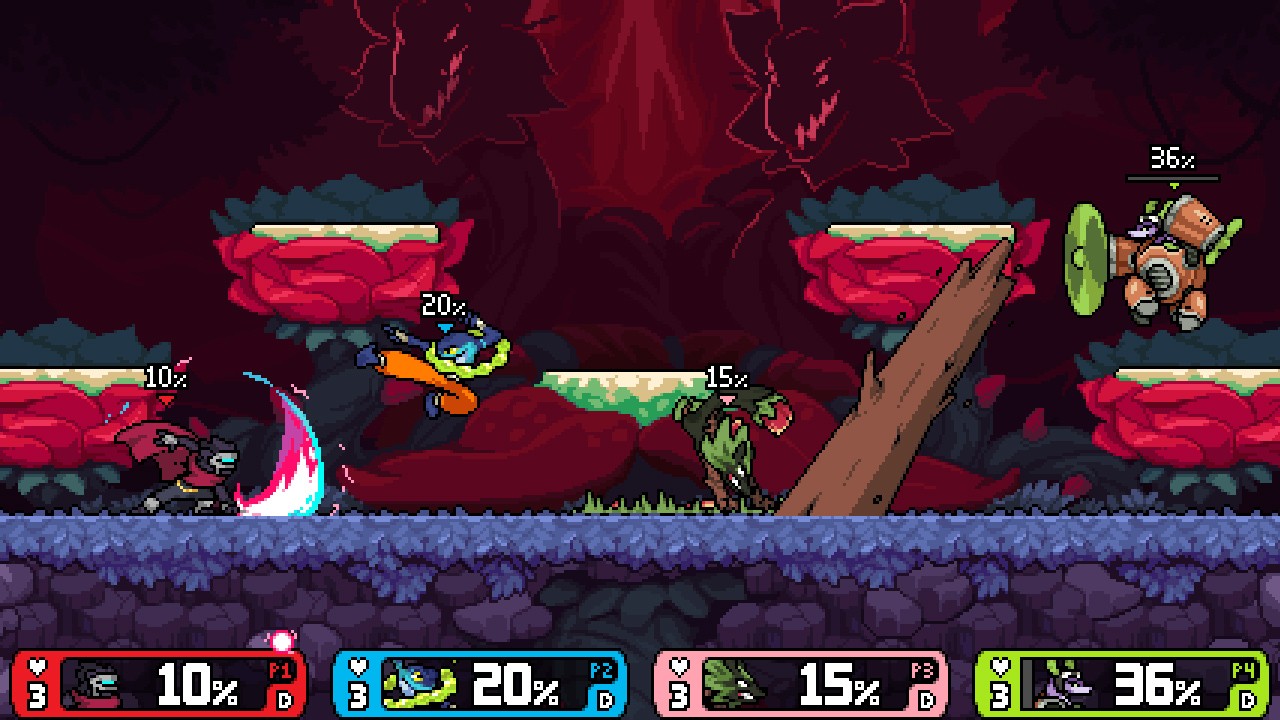 Before diving into the deeper mechanics of Rivals of Aether, I wanted to take a moment to appreciate the overall appearance. Rivals sports an incredibly well designed pixel aesthetic that works especially well in the game’s favour. For one, I believe the more low fidelity design allows for a significantly smaller install size, which is crucial to Switch players (especially if they have Smash on there already). Secondly, it just looks especially good and allows for better visual tracking of the action and where your sprite is in the mayhem. I recently played Bounty Battle and was stunned and saddened both by how it played and how murky things could be in the midst of a larger brawl. Here, Rivals ensures that each character is able to easily discern who they are on the field with a good mix of character variety, plenty of alternate costumes (including ones that can be unlocked) and good use of spatial construct to create an experience that not only looks good, but feels great. Plus, this is the first time I’ve really seen Ori outside of his own amazingly crafted series, and he still looks good in pixel format, so count that as a blessing.

Like all fighting games, the secret sauce of Rivals of Aether is to make the matches intense, fast, fun and short. Players coming into this game need look no further than the multiple game modes available for single or local Co-op to understand how this is properly incorporated into the Rivals game. You’ve got your standard versus mode where you can go nuts in 1v1 all the way to a four person free-for-all, and that would be perfectly adequate in most games. Rivals takes it a step further with a multi-tiered story mode that enables and asks players to take a bit of time with each character in order to understand the greater storyline of Aethers. The blend of humanoid and distinctly anthropomorphic animal characters weave a strange, complex tale that asks a lot of the player to know and appreciate different regions, social hierarchy, royal family and cunning plots, but you can straight up skip the story if you just want to brutalize through and enjoy the way the five-battle progression lines are set up. There’s also a matter of The Abyss, a sort of survival zone where you can fight against endless waves of shadow enemies or accomplish a set of tasks that are given to you in waves before you succumb to too much damage. The Abyss is a great place to basically hone a character you enjoy if you don’t want to keep grinding away in CPU versus or in the tutorial area (though everyone should take one spin in the tutorial to understand some Rivals nuances before jumping into things). Lastly, my personal favourite, is Rivals of Tether, a beach tetherball game where you beat the hell out of the ball and each other to see who can do the best out of three. This concept is so ridiculous that it works marvellously, and I actually loved seeing how I could balance well timed ball hits with actively attempting to maim my opponent. Seriously, take a minute and go check it out if you haven’t already.

Down to the nitty gritty, Rivals of Aether is this phenomenal experiment in mixed fighting styles and execution within the bounds of constantly shifting and advantizing landscapes. Each and every character has a bit of a leg up in certain regions and also experiences some serious handicap in others. You need only to look at Orcane and his water levels to see that certain places work out better for some rather than others. In that same breath, I don’t think there was a single place where a character felt like they were doomed to die. I loved to play as Kragg, who is inherently slower and less agile, but I could still bring the heat when the time came to defend against the faster forces of characters like Wrastor and Maypul. You just need to learn when to do the standard hit, when to use your unique special moves, and when to try to lock things down with a heavy attack. Be warned, though: not everything can be boiled down to this simple ideology. In fact, things like the special guard that can absorb an attack and leave an opponent momentarily stunned can easily turn the tide. Also, characters are able to basically wall jump when they fall off the ledge, so as long as they can get close enough to some of the stage tent posts, they can recover and climb back up from seemingly nowhere. The only way to ensure victory is brutal, terrible annihilation, and it’s glorious. 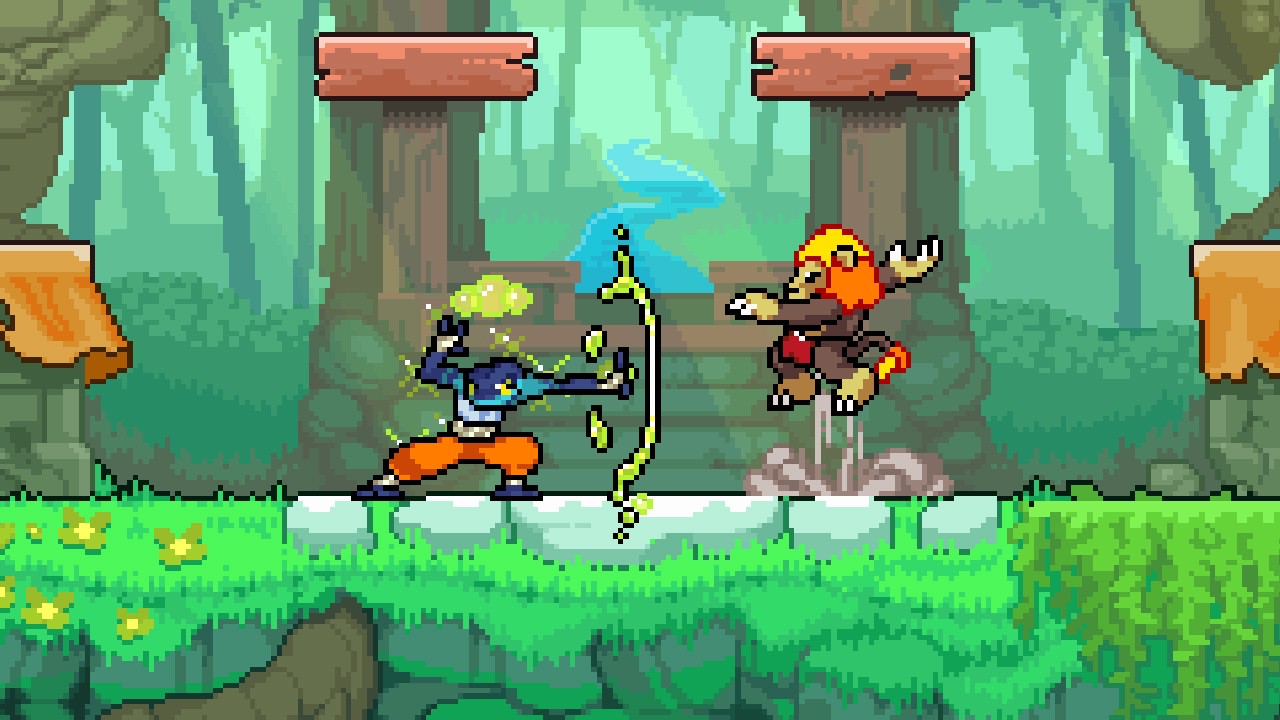 One thing that I think Rivals of Aether does fantastically well is giving each and every character a different playstyle that someone has to learn. The special abilities feel like they’re incredibly powerful when seen individually, and, taken without context, they’re almost broken. Orcane can teleport around the stage thanks to his water puddles. Forsburn summons a doppelganger to confuse and distract the opponent. Ranno can stack poison damage and then run away until the opponent is at critical mass. Hell, Shovel Knight’s entire repertoire feels like he’s playing a separate game in the middle of fighting, but doing it correctly creates such a powerful entity that you seriously can’t leave a Shovel Knight player alone for more than a second. A person who gets good with Etalus has to totally relearn the game if they also want to succeed with Wrastor because the latter only really works in the air, not on the ground. Yet, because of the balance and the careful, methodic crafting that has gone into making these fourteen characters work, the game is incredibly enjoyable for both casual and competitive. Hell, it’s crazy to see that I could actually make some casual matches in my time zone, because that usually only happens with Nintendo Online titles and…not much else. This game is so incredibly tight I’m surprised it’s not turning blue.

Rivals of Aether is the pitch perfect positive fighting game for people looking for something new, different and effective. It doesn’t come from one of the major fight houses, but still brings the polish, boldness and confidence of a game that was tried, tweaked and retried religiously over the years. It’s finally on the Switch, it plays amazingly, and fans will be joyous to have a new mobile way to rock the frigging house. I simply cannot recommend this enough. I’m not saying it replaces anything on the market: it simply makes a brand new slot that it fits into perfectly.

There’s a goddamn wizard at work behind this game, because I cannot believe how incredibly this pixel art fighter can play.