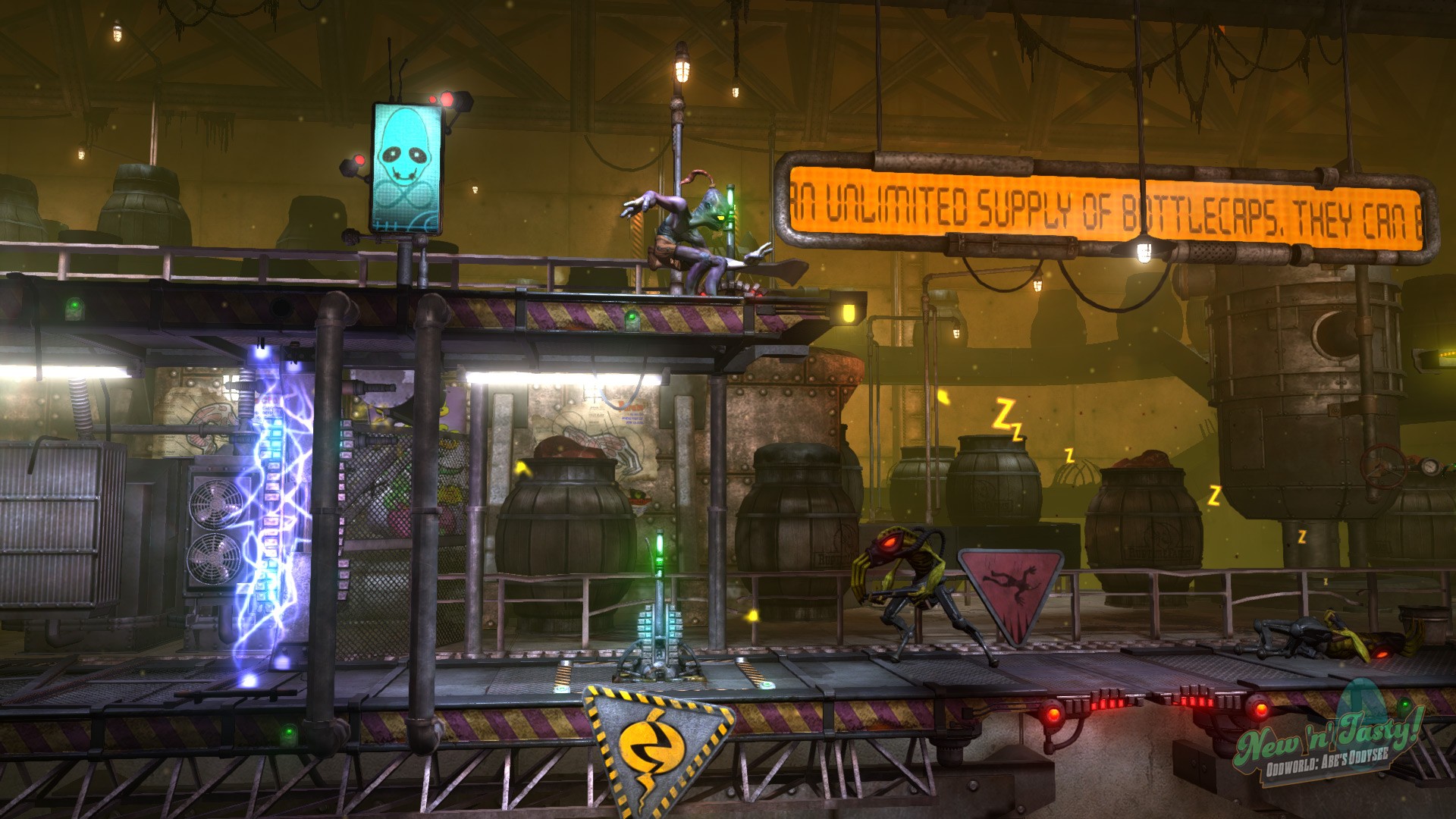 It’s always okay to admit that a game wasn’t as good as you wanted it to be. We develop games with the technology that’s available, with the coding languages and APIs given to us, and we can always recognize that things could be better with a bit of improvement. This is why we didn’t just call it a day after the 2600 sold a million consoles and Atari made a ton of money off of what arguably looked terrible. Frigging Pac-Man, the most recognizable arcade relic that still survives to this day, doesn’t look the same in Smash as he did at the pizzeria cabinet I played 30 years ago: he’s gotten better. Oddworld Inhabitants, the development company that creates the Oddworld franchise, knew that the original Abe’s Oddysee, is a treasure for what it brought to the table at the time and can be recognized for its amazing contribution to the world of Playstation and, later, to some really great PC gaming sequels. But the graphics of the first generation Playstation are rough compared to today, though they absolutely blew our minds at the time. So it only makes sense that the Nintendo Switch users get a chance to see this legendary tale through some cleaner lenses.

Oddworld: New ‘n’ Tasty is a remake of Abe’s Oddysee, but not in the classic sense of the word. Unlike many remakes that retain the original code and just slap on some nice filters or updated controls, New ‘n’ Tasty is a brand new creation, taking the script of the original game and then building heavily upon it (which was done by partner company Just Add Water!) . As a result, if you decided to go ahead and play Munch’s Oddysee when it was available for the Switch, you might be a tad confused as this is a very different game style, but also is much, much earlier in the saga of the Mudokons (and there is nothing about gabbits). You play Abe, a Mudokon who is enslaved at the RuptureFarms (a meat harvesting factory) and have just had the unfortunate luck of overhearing that the Glukkons (the slavers) are changing the animals they get meat from, and your species is now on the menu. Not particularly keen on being slaughtered and eaten, Abe decides he needs to escape, but also needs to free his kinfolk as well. With no means of offence or defence, but a particularly interesting ability to interact with other Mudokons and the world around him (which grows in power exponentially), Abe is off to do the right thing and make sure that his species doesn’t die at the end of a fork.

Oddworld: New ‘n’ Tasty is a puzzle platformer that requires a bit of skill, thinking and occasionally fast action in order to survive. As a mostly defenceless Mukodon, Abe’s initial solutions are running, hiding and trying not to be noticed. If a guard sees him it takes only one Glukkon shot to put you down.  Creeping through the shadows and trying not to wake up guards is also a thing, so keep that in mind. As the leader of the freed people, Abe also has the ability to use different GameSpeak options, where they communicate through short words and gestures to get Mukodons to join his exodus and also help him out. Getting other Mukodons to work together to interact with some objects or move obstacles can be incredibly necessary to survive, and also pivotal to the maximum escape possibility. There are a whopping 299 Mukodons to find and free throughout the game, and it’s entirely possible to miss quite a few of them and still get to “victory.” Players looking for the best possible ending and scores should be careful and cautious to ferret out every last kinsman and get them to safety: It can be an arduous task, but there are improvements that New ‘n’ Tasty make to help this along. 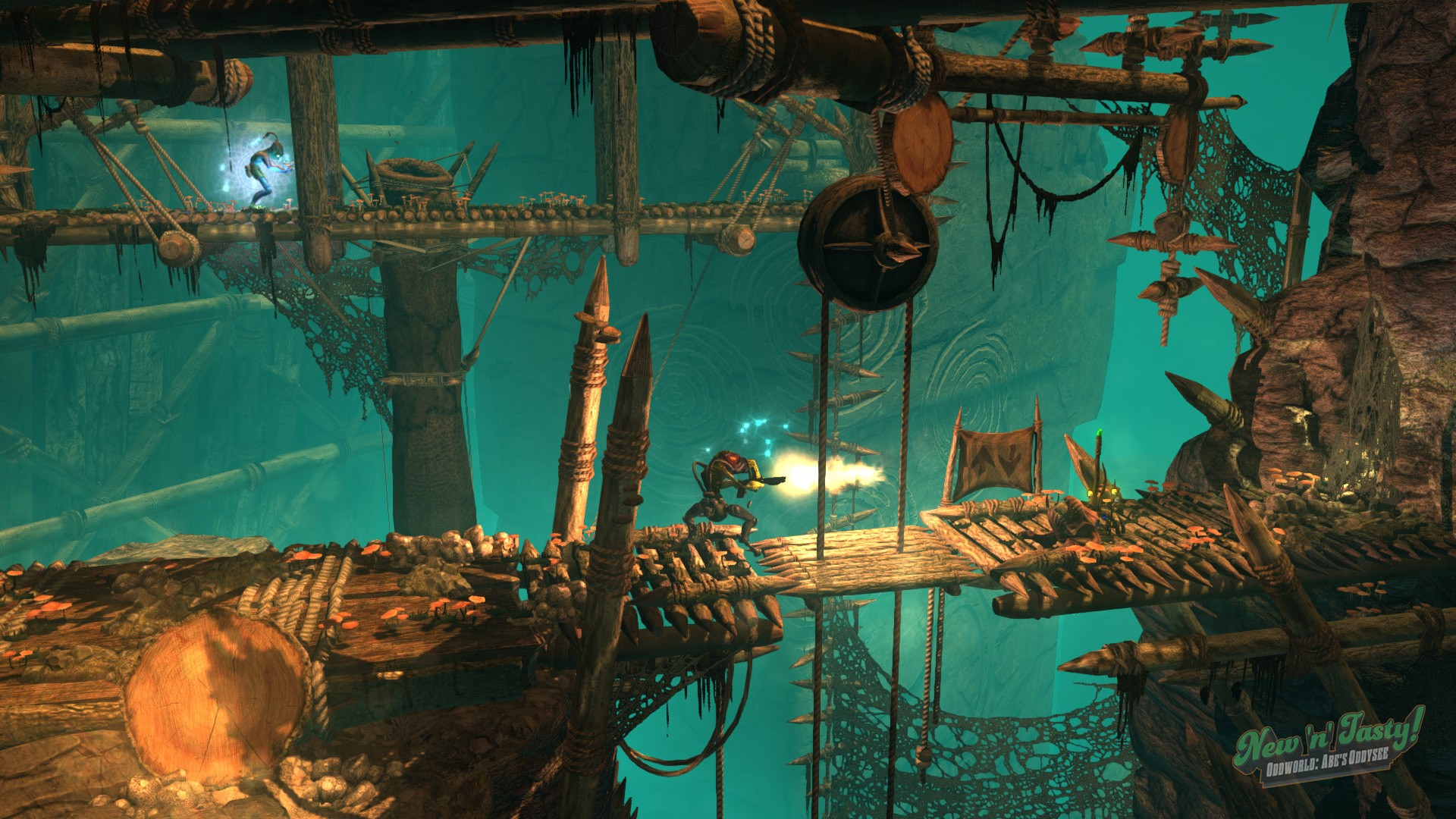 For those who have never played the original Abe’s Oddysee, the QOL improvements between the first iteration and this New ‘n’ Tasty version might not be abjectly apparent, so I’ll enumerate them. First and foremost is a scalable difficulty meter, which can be of great help to many people. It’s really interesting that the default “Hard” is on par with the original game, whereas  “Easy” affords a much more flexible game, allowing Abe to take a few hits and also making the Mukodons go down faster. Later on, Abe comes into some mystic powers through a shaman that deems Abe to be the true saviour of his people, and so Abe gets the ability to possess certain beings and make them shoot other guards out of the way. Having this function where only a shot or two takes down the guards speeds up things considerably and also makes it so there’s no room for error if you’re slow on the draw. This, combined with an adjustment to the checkpoint save system, means the game is infinitely more enjoyable for people who are looking to learn the story and see the atmosphere instead of just challenging themselves.

Abe’s Oddysee has a lot of interesting puzzle mechanics that make the game truly remarkable to try and get through. The gameplay goes beyond simple exploration and stealth and, instead, becomes a real stratagem of memorization and problem solving. There are times where you need Mukodons to be in specific areas at specific moments in order to move forward. There are memorization moments when sound effects and patterns (including farts) need to be copied back in order to progress.  There are chances to distract and protect through hurling objects, which are limited in nature and essential in practice. With the updated soundscape piped into New ‘n’ Tasty, the developers were able to bring some of the ideas and stylistic elements of later games back into this original one without changing the landscape entirely. It feels natural and cohesive, like many of the small speech patterns or sound effects were always there.

As a standalone game, Oddworld: New ‘n’ Tasty is a complex but enjoyable tale to behold. Abe does journey through many areas on his quest for freedom, revelation and turning the tides of the future for the Mukodons. It’s fantastic that a game in 1999 would have had both good and bad endings for your collecting efforts: after all, it was more than possible to escape and “win” with as few Mukodons as possible, but the foreshadowing of the fate of those left behind was a sad one indeed. In this new game, the controls are very tight and responsive, allowing players to quickly cycle between movements and creeping, dashing and crouching, giving Abe’s survival rate a much needed boost and allowing you to handle the game in a more haphazard but not foolish way. I understand that these new movements might be a boon to speedrunners in particular, but everyone will benefit from a game being more responsive. 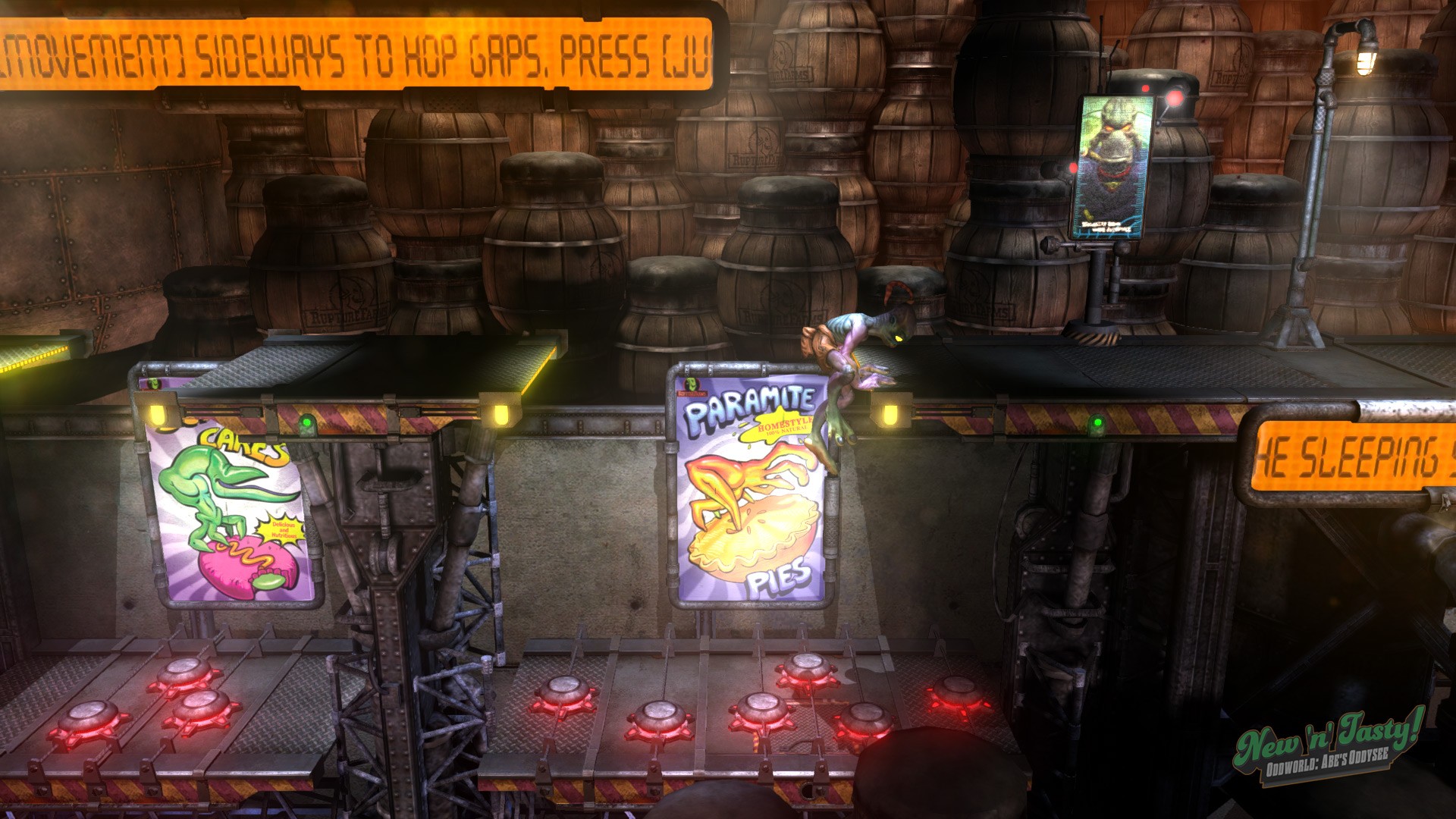 The only contested area of New ‘n’ Tasty might be the visuals, and I can see the arguments on both sides of the table. On the one hand, the original version of Abe’s Oddysee got a lot of attention due, in part, to the meticulous design of the backgrounds and areas. Essentially, the development team would craft the necessary parts of the world where Abe and other characters would interact, and then the design team would add details behind and over that, like someone flushing out a great comic book panel. Since everything was done together with newer technology, there are choices made in the artistic realm that involve the newer computer-graphic options, and old school players might not enjoy that. For the most part, I think the new game looks excellent, and the bloom and shine effects aren’t too overwhelming. Heading out into nature, you miss some of the hand drawn aesthetic, but still really appreciate the lushness of the free world outside of the RuptureFarms. The only downside is that the personal touches of how things in the factory looked are gone, which is a bit disappointing. The handmade effect gave this extra grimy and dirty quality to the meat factory, which really played into the depressing and hopeless nature of it all. In CGI land, the factory looks a bit too metallic and industrial, more Terminator 2 and less Metropolis. It’s not bad, it’s just not my favourite.

Still, the developers were right to bring New ‘n’ Tasty to the Switch, particularly with Munch’s Oddysee already available. Showing off an incredibly successful port complete with great overhauls, the spirit of the original game persevers and plenty of reason for both veterans and novices alike to play, Oddworld: New ‘n’ Tasty is a fascinating treat to enjoy. Just don’t chew on it too long: it might leave a funny taste in your mouth.

New? Kinda. Fresh? I’d say so. Oddworld? 100%, and definitely a great re-imagining of Abe’s first foray into the video game halls of fame.