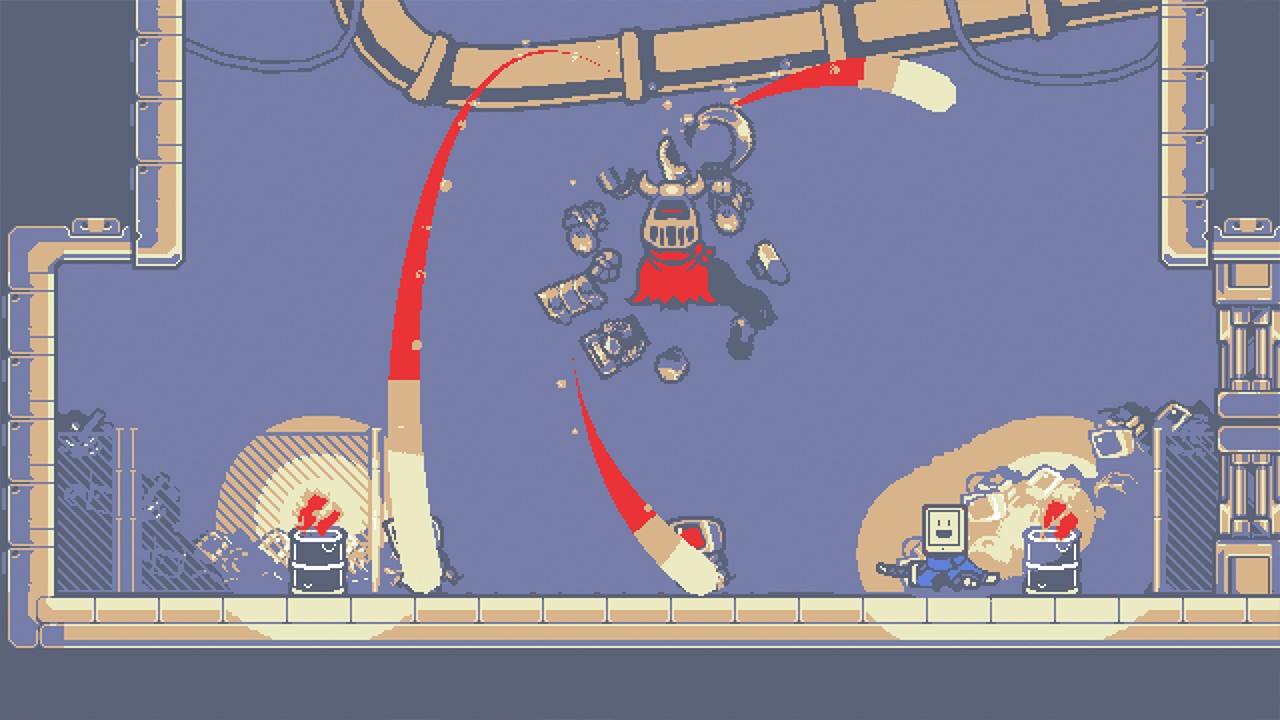 There’s no introduction to this review. There is only the fast, agile response to the experience that is Kunai, a Metroidvania action game that comes to us from Turtleblaze, an indie developer that I’ve never heard of before but instantly loved the name. You can’t stop and think about what might or might not be correct about this lead-in: you can only strap in and go rocketing forward.

With Kunai, you play Tabby, a combination tablet PC and android who is brought online by The Resistance in order to combat Lemonkus. Lemonkus is a rogue A.I. that has ground humanity into the dirt and now leaves the world at the mercy of insane robots with malicious intent. Tabby, for what it’s worth, seems to be a pure being who was recruited with nary a thought as to the how or why, and is sort of picking things up as it goes. There’s probably more to the plot, but you’ll have to grapple (hah) with that as you move forward because there is no time to waste with exposition or thinking to the greater degree. You get snippets of conversation, some insight, a very grim prologue cutscene and that’s it. Welcome to Tabby’s world, the world of Kunai.

As the title implies, Kunai relies very much on the ancient Japanese tool-turned-weapon to make the most of this game. Keep in mind that Tabby is not going to be using one as its primary attack: no, Tabby leaves that to the boss katana that is found a few rooms after spawning. Instead, shortly after leaving the Resistance spawn point, Tabby finds the titular Kunais in some rooms inside a creepy laboratory, and then the game really begins. You have one for each hand (which are set to the shoulder buttons) and mastery of how to use these items in conjunction and in combination with each other becomes pivotal. The kunais create a Spiderman-like line for Tabby to swing, climb and wall jump throughout the different regions of this fallen world, and it’s everything you could want. There are the awesome moments where you fire off both to lift straight up, the times where you quickly chain one direction to go hurtling through the skies, and even the times where you have to rapidly toggle between sides to fake out enemies, traps and bosses. This is all pretty standard fare, but wait: there’s more. 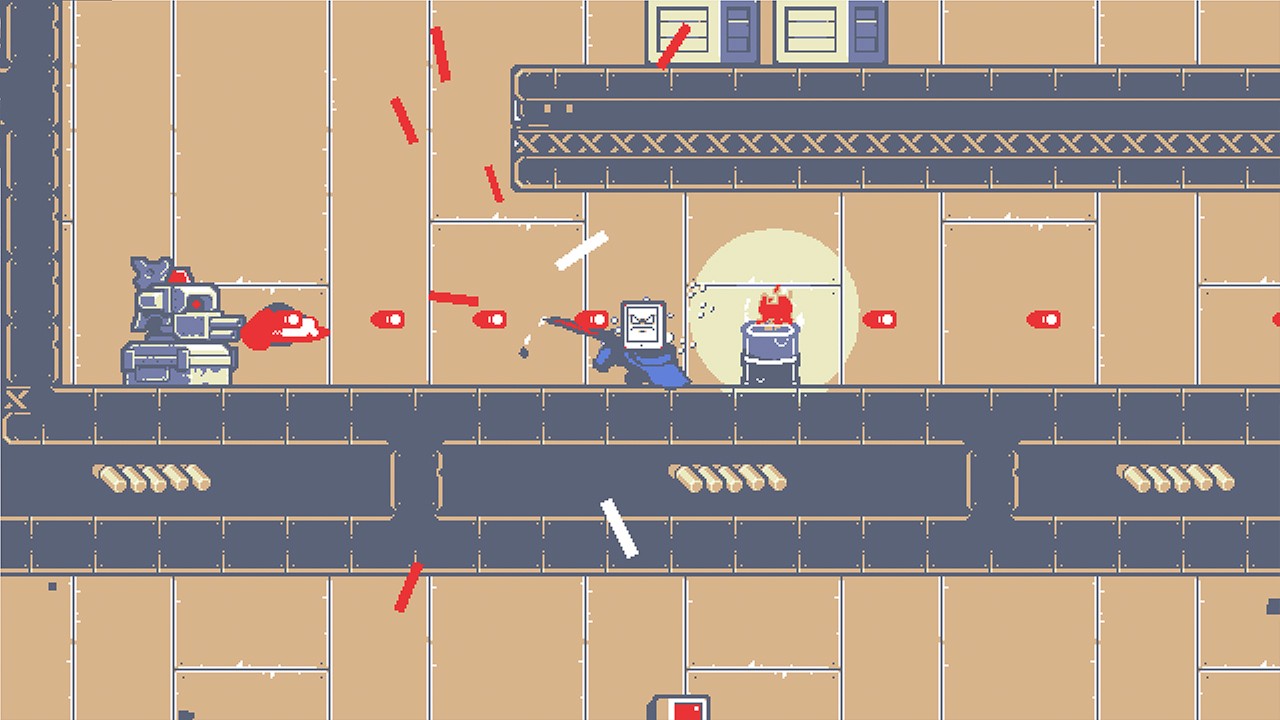 Tabby will pick up more weapons and items as it moves along, which, in turn, opens up more of the game. In that aspect, Kunai is a very straightforward but also very intuitive Metroidvania, as you’ll get hints of areas you can’t yet access but need to eventually from the very beginning. Different coloured doors, specific toggles, all sorts of almost-but-not-quite accessible points sprawl out, allowing the map of Kunai to be very versatile and vast without being unobtainable. The mapping system that Tabby discovers will help to easily categorize where it has and hasn’t been, with shadows to show where the next steps will be on the path to success. Tabby discovers a sort of router-based shop that can provide upgrades to the existing items that Tabby possesses, like increasing sword strength or extending the life meter of our peppy little hero. I don’t think there was a single thing that needed to be purchased to progress the game, though, so don’t worry if you’re not interested in grinding currency drops from the mobs: all Tabby needs to make it through the game will be made available throughout play.

What helps Kunai stand apart from other Metroidvania is the execution of the project. This is a game that could have easily evolved into a ten-hour trudge, and, instead, it becomes a four-hour exercise in muscle memory and reflexes. Kunai is tight in how it handles, and it feels so good it needs to be felt in order to be believed. The hitboxes of enemies are small and the need to flash down that sword or hurl a shuriken comes with milliseconds of response to a button being pressed. There’s no moments of float or ethereal questioning as to what you’re doing. The very nature of navigation and movement demands that Kunai respond to you as fast as you can think, and Turtleblaze coded this thing down to a T in terms of cooperation. When Tabby gets moving – and I mean this android MOVES – there’s no stopping it. You can dart through several screens of terrain and area with almost no resistance, quickly dispatching anything that gets in your way. This is even more impressive when you figure out that Kunai does have a good variety of enemies, from simple wander mobs to kamikaze drones and bastard bots that can fill the sky with bullets if you don’t strike them down immediately.

Now, it’s not a perfect experience. There are moments where the game decides to challenge you in different ways that I wasn’t a huge fan of. After so many points of moving fast and clocking amazing speeds, I got pretty frustrated at times where Kunai felt like it was testing your patience in climbing and pinpoint precision. There’s one particular moment where you need to scale several screens of walls and do some serious ceiling swinging in order to reach one friendly NPC and help them out, and a single slip will cause you to plummet down, not dying but resetting several minutes of hard work. This felt intentionally forced in to slow the player down and see if you understood more about the controls that you’ve already been enjoying for the last hour or so, and it was almost demeaning. Like, yeah, I know how to climb walls: that’s how I’ve survived a lot of these boss fights and I think this exercise in Cliffhanger reproduction is bull. But that was a minor point in the grand scope of things, just be aware of it. 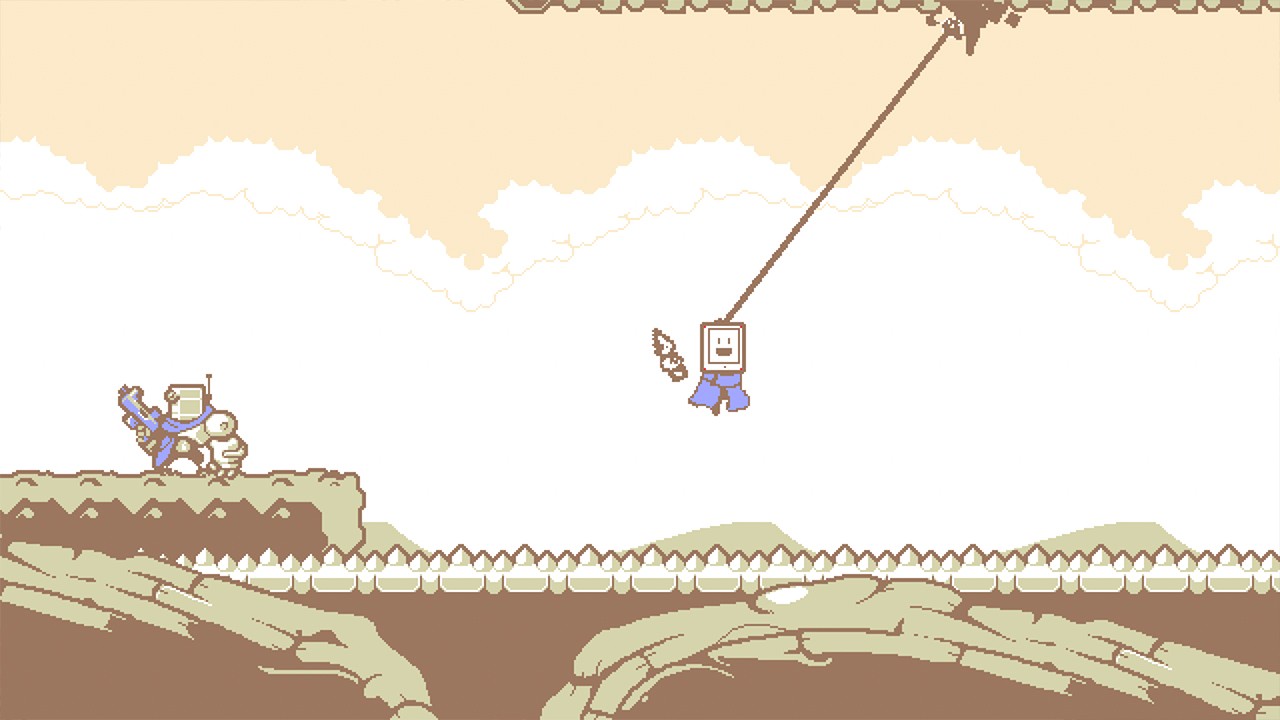 As a sensory stimulation game, Kunai hits all the right notes. The colour scheme and level layout give the idea that Turtleblaze had this all road mapped very deliberately and carefully before incorporating. Tabby goes through a wide variety of areas and terrain, each with its own sort of theme and its own theme music, which players simply must enjoy. What it reminded me of is the Super Gameboy era. When the SNES decided to bring Gameboy games to the console, it incorporated a special way to add colour and some ideas to the games (though the Gameboy Color titles had this ready to go). Kunai’s got this aesthetic to it that reminds me of that, and it works magnificently in a dystopian world where your protagonist is all smiles until they unsheath their weapons. The gradient and effect is perfect, and the quality is certainly higher than those old 8-bit games blown up onto the big screen. It’s even more magnificent when Tabby starts to bring out hats and costumes, particularly since several of them come from slain enemies. Tabby, you cold as ice.

This was a treat of a game and I’m sincerely glad I got a chance to fly through the world of Kunai. As a Metroidvania title, it delivers absolutely, and as a fast-paced combat title it glides along with the best of them. I haven’t seen any talk about this game before, so I highly encourage fans of The Messenger, Axiom Verge or even classic Metroid to dive in and give Tabby’s role a shot. It’s remarkable, and should be played to be understood.

Kunai is one of those games where you don’t know what to expect and, as such, are blown away by the level of performance and delivery in this indie jewel.