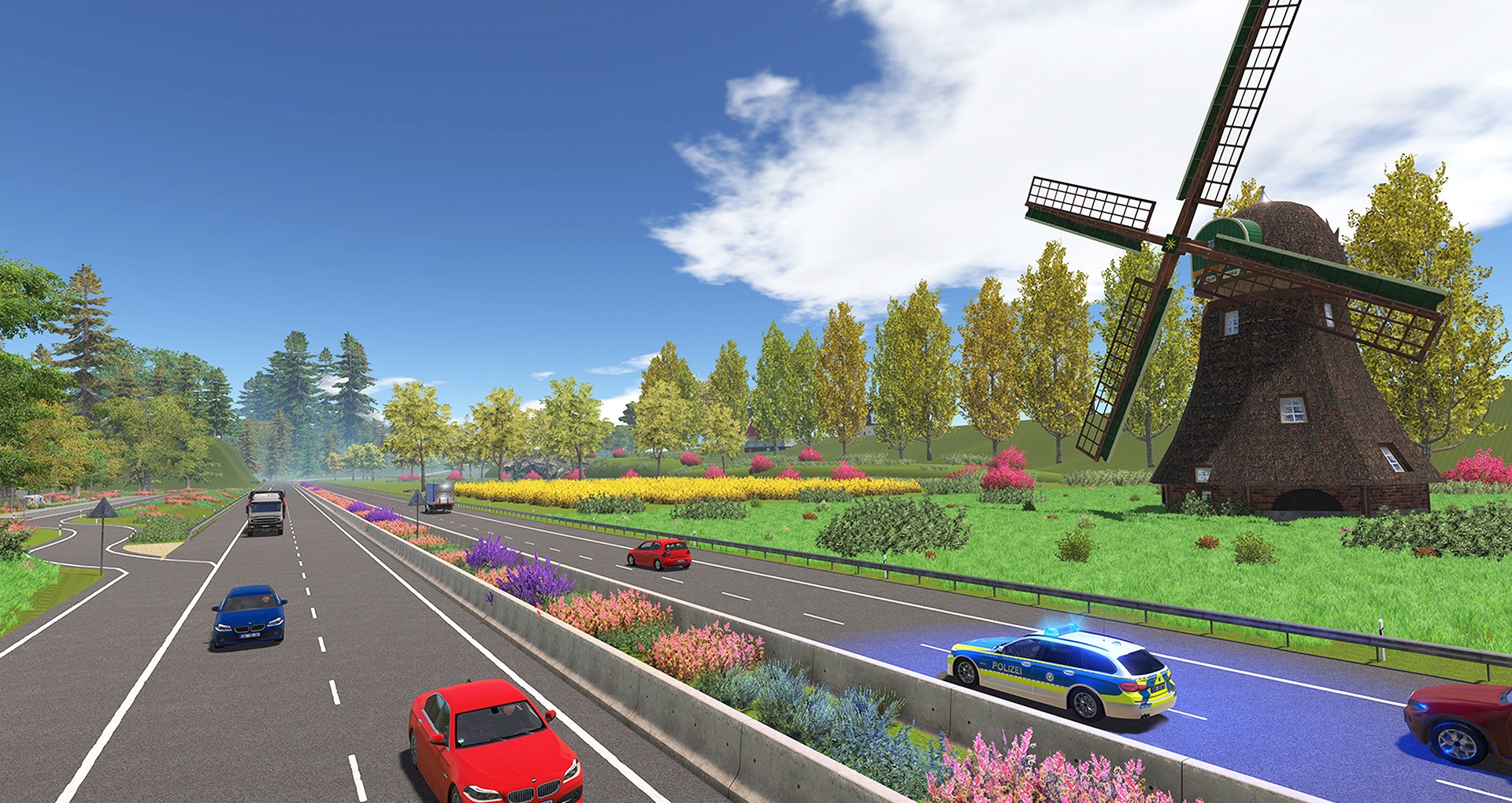 I think it would be fair to say that most people have a desire to join one of the emergency services as they grow up. Whether it’s because of family ties, or the relentless use of the theme for cartoons and child-focused programs. Whatever the reason, most children love being the hero, taking down the bad guys, putting out fires, or saving people’s lives. This doesn’t mean that every child will live out their early fantasies, but I think that deep down we all get that urge to play the part if the opportunity arises. For us gamers, this chance presents itself more frequently, and the simulation or adventure genres are where its most prevalent.

Autobahn Police Simulator 2 is my latest review title that allows me to play the part of a rookie cop who must stop crime at any cost. Developed by Z-Software and published by Aerosoft GmbH this open-world adventure game brings all the thrills and spills of the fast-paced life of a cop to your console. With a story mode containing 20 action-packed missions, free roam mode, and a vast selection of police-related activities (including eating doughnuts), there is a considerable amount to do.

Sounds great, right? The concept of the game is fantastic. You have the freedom to race around the autobahn, using your siren, and an onboard matrix of lights to instruct fellow drivers of your intentions. You can operate a selection of vehicles and interact with anyone that you come across. The police radio keeps you informed of all accidents and incidents that occur, and you are free to respond to any you wish (as long as you are not already on a mission). There is an array of cutscenes that helps you to build relationships with the main characters, progress the story and you are given details of what is happening in the world.

There is plenty going on, it’s just a shame it’s been delivered in such a dated and haphazard way. The cinematic is hilarious, not because of the dialogue, no, it’s badly synced, wooden, and your local amateur dramatic society would be more believable. The graphics are close to Xbox or PS1 standard, it’s blocky, rough around the edges, and lacks detail and texture. Now, graphics aren’t everything, but I expect much better from a game that is demanding this price tag. Like I said, it’s hilarious, so it at least has that going for it, even if it’s unintentional from the developers. The game is set in Germany. The description states that the action takes place on Europe’s fastest roads. This is correct the autobahn is a fast motorway. But what confused me throughout was all the characters had classic German names, like Hans, but yet every person spoke with a thick English accent. I don’t know what made me laugh more, the poor acting, the flapping of the mouths as they spoke, or the lack of German nationals. 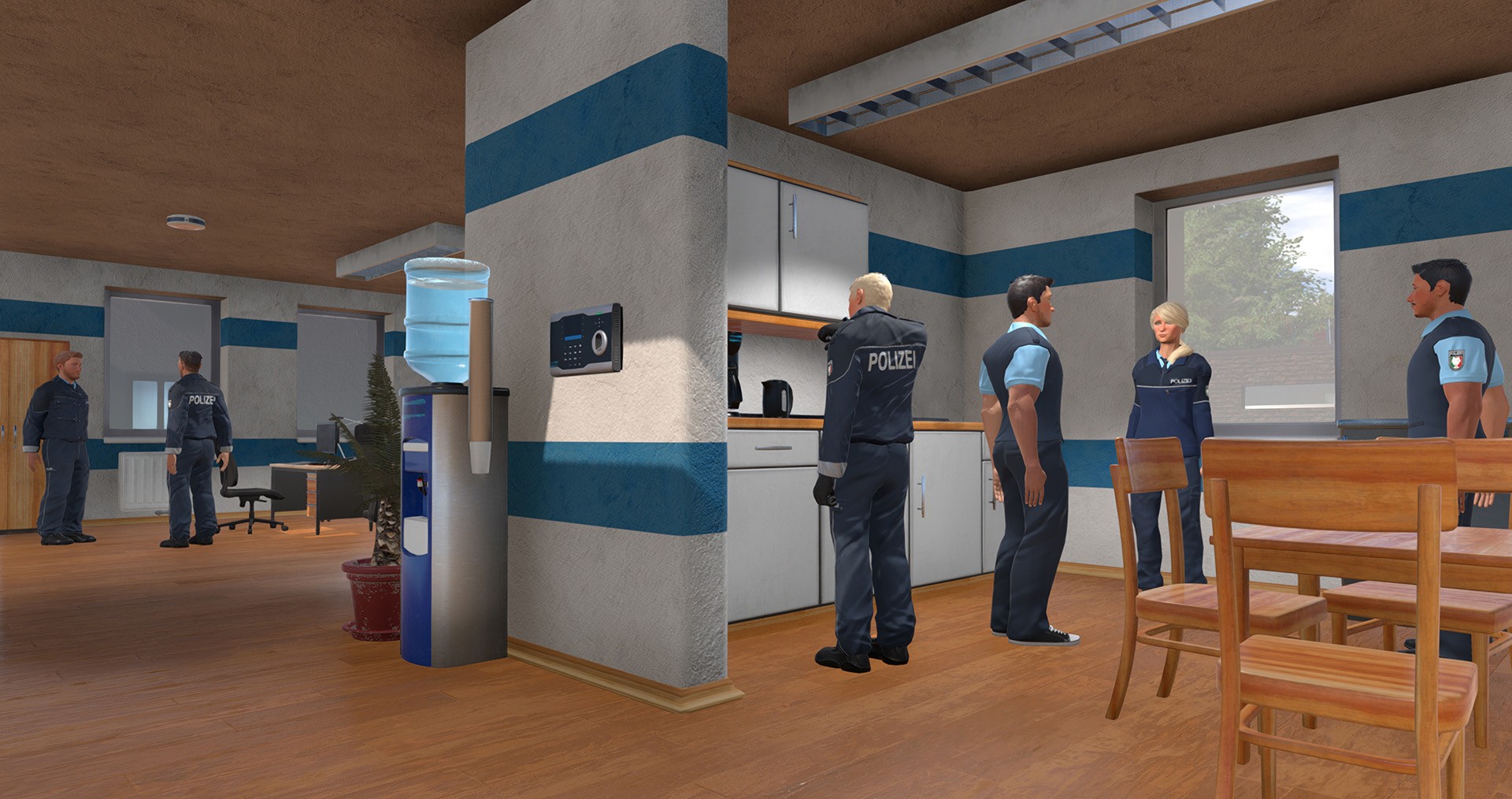 So, the graphics and delivery of cinematic aren’t great, surely the gaming concept can save this title? Yes, and no. When most of the action relies on you driving from the police station to your mission, you’d expect the handling of your car to be spot on. Unfortunately, it’s not. An oceanic supertanker would handle better than this “nimble” sports car. You collide with more barriers and obstacles than a pinball being hit around a machine. Again, this wouldn’t be so much of an issue, but it makes moving around the map hard work, and also adds to something called “chaos”. “Chaos” is a meter that slowly fills from 0 to 100% as you collide with anything in your path. If you avoid obstacles, it will slowly deplete to 0, but if you hit the dreaded 100% mark, then the mission will automatically fail, and you restart the game back at the station. This will enrage you! You’ve spent 10 minutes driving across the map, only for the game to say you’ve hit something, and bam, your “chaos” meter is full, mission failed.

Before I hit on the positives, because there are a few, I need to highlight the lack of turning points in any of the roads. Everything has a central barrier that prevents you from turning around. You may think, “So what, why does that matter?” Every mission that you are given appears around 10 km away from your location, usually in the opposite direction. This means you end up driving around 5 minutes the wrong way, just to find a turn-off. This doesn’t happen occasionally, this happens every single time. It’s soul-destroying and takes most of the fun out of the game.

Let me stop being negative for a moment and look at the positives. There are a wide variety of missions that you can undertake; high-speed chases, escorting special vehicles, accident investigation, and car violation stops. This alongside the main story missions gives you an insight into a traffic officers day-to-day job. If you don’t fancy taking on these tasks, and want to go rogue, then stop and check any driver you come across. Inspect their licence, breathalyse and check them for drug driving, you can arrest anyone that flaunts the law, or let them off with a warning, you’re in charge, so it’s your choice. If you add in the ability to upgrade yourself, the station, and the car you drive, there is a lot to do. As you progress through the story, your character earns promotions, which impacts the surrounding people. This was a nice approach from the developers and added a different dynamic to the rest of the game. Depending on how you responded to questions affects your friends’ and colleagues’ relationships. So, it’s a choice, be everyone’s friend, or a lone wolf, it’s up to you.

I’m not a man who gets hung up on graphics usually, but I couldn’t help it with this game. It’s so dated that it was shocking. I was reminded of the Ps1 title Driver in so many aspects of the presentation, and unfortunately, that game has not aged well. Not only does it look bad, but it’s also terribly optimised. The game hangs when loading between sections of the world, the car collides with invisible objects, and everything looks flat and unrealistic. For a modern-day game, it falls short of what is expected. 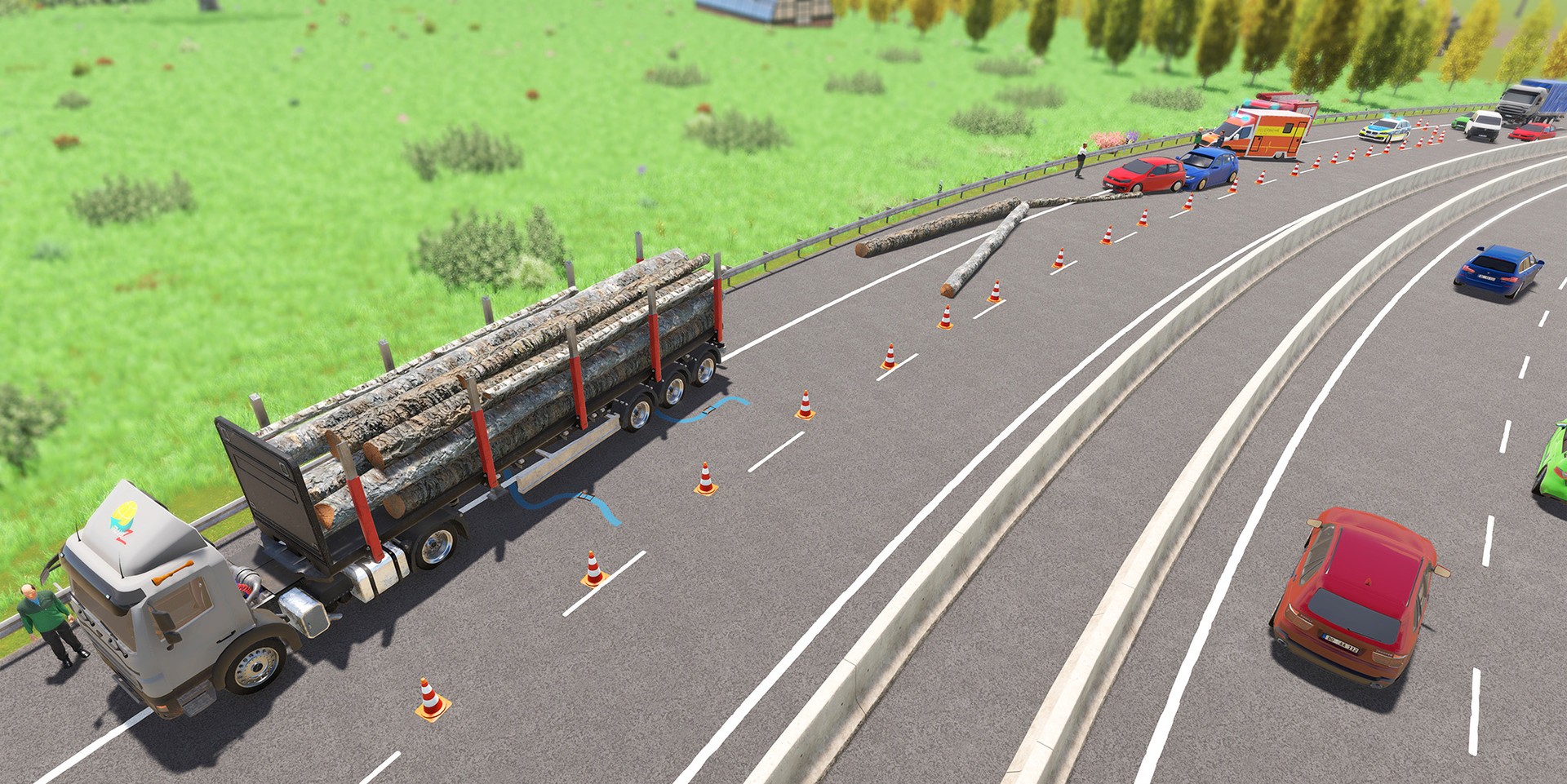 The audio, however, was very good. It was realistic and matched the theme well. The police radio sounded great, as did the 2 different sirens to choose from. The matrix board noise was sharp and crass and added to the real-life sound effects perfectly. If the rest of this title worked as well as this, then Z-Software would have created an amazing title that all simulation fans would have loved.

Controls as already mentioned, are not as responsive as they should be. All actions were like wading through mud. Once you got used to how it worked, you could just about play, but it was always a struggle, and made it not as enjoyable as it should have been.

When I look at anything that is open-world, I instantly expect there to be plenty of replay value. Which there is in Autobahn Police Simulator 2, but you have to put up with an awful lot to get it. I think more gamers will be put off by the bugs, and poorly delivered mechanics, than accept them just to arrest a man for speeding on the autobahn. It’s a shame as it could have been great fun, especially if you could have played with friends, or had mini-games, such as; cops and robbers. If this was introduced, then I believe people would be more forgiving of the shortcomings.

It’s a shame when I have to be so negative about any game, but I can’t pretend that I didn’t find this one frustrating as hell to play. If the issues I had faced happened rarely, then I could forgive them and move on, but they didn’t. It was a permanent feature throughout. This doesn’t mean that it’s a total bust, I had fun in between the problems, and the cinematic is a comical treat, but it failed to hit the mark. Do I recommend this? No. This will attract hardcore fans, but for the everyday gamer, this has far too many problems to make for a fun experience. Get your uniform on, and start your first day on the job, that is, if you can get past the bugs and glitches.

A police simulator that falls short of its potential. Bugs, glitches, and dated graphics await you.