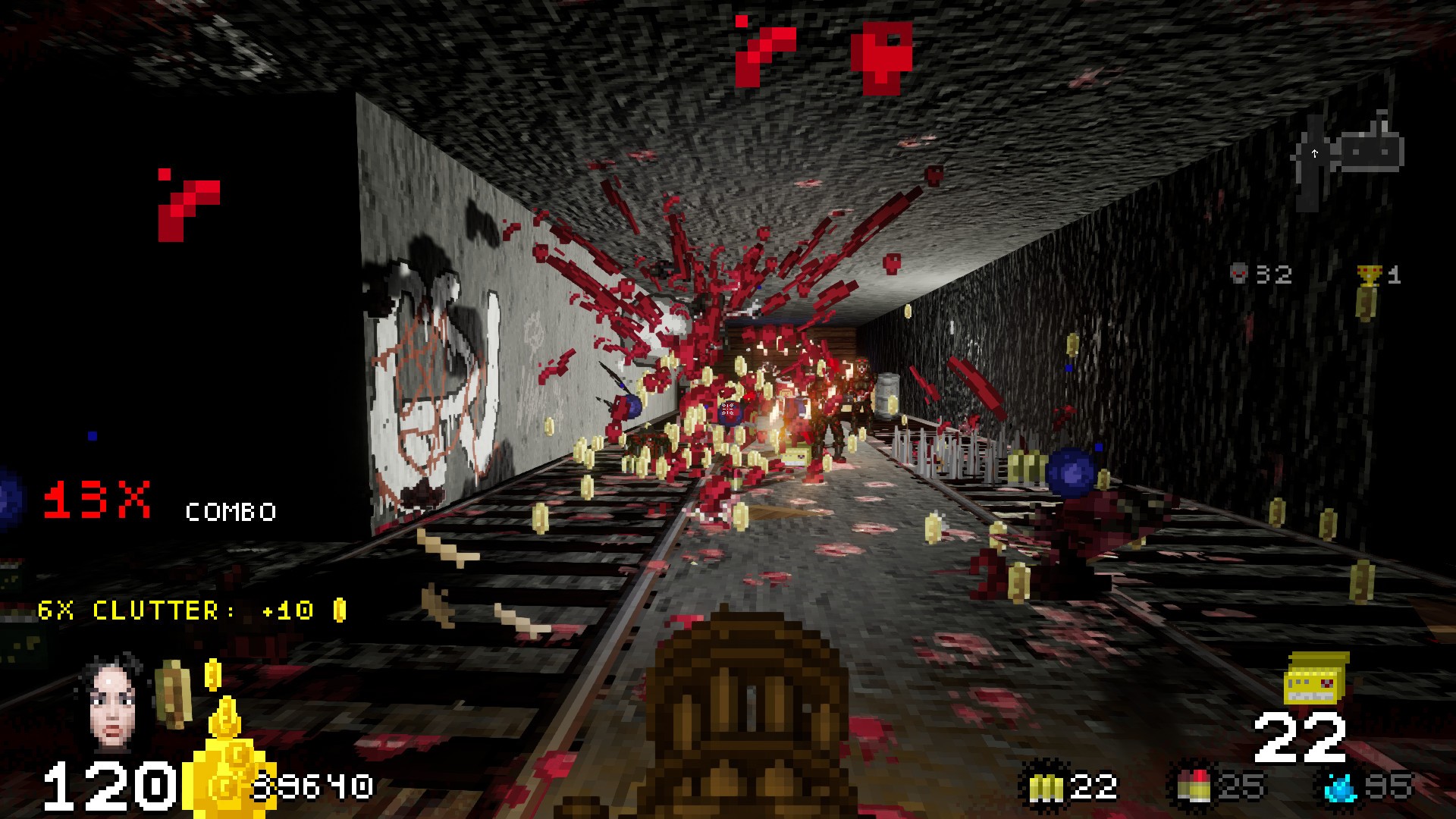 It’s a hell of a time to be an FPS fan. Over the last few years, we have seen the reboots of the beloved Doom and Wolfenstein franchises, the release of indie-hits such as DUSK, AMID EVIL, Wrath: Aeon of Ruin, Ion Fury and Black Mesa, and Nightmare Reaper is shaping up to be the next in line.

Nightmare Reaper is one of the most satisfying shooters that I’ve played in recent memory. At first glance, it might seem like just another game that’s trying to cash in on the nostalgia of 90s shooters, but that couldn’t be further from the truth. Nightmare Reaper takes what many of us fondly remember of shooters like Doom and Duke Nukem, and mixes it with modern gameplay mechanics.

Nightmare Reaper puts players in the shoes of a female character that ended up in an asylum. Although details are hazy at first, you slowly start to piece together her story, as you gradually gain access to the new pages of her doctor’s report on her. This can only be done between levels, which materialize as your character’s nightmares, but you can also get to walk around the asylum where you’re hospitalized. With that said, even though Nightmare Reaper does seem to place some effort into telling a story, it really isn’t the meat of the game. If you were hoping for an FPS with some story focus, then you’ll probably be disappointed, as Nightmare Reaper is all about the gameplay.

At the moment, Nightmare Reaper features 19 different themed zones, each featuring 3 individual levels, as well as a boss encounter at the end of every three zones. Although the game lends a room-based system from dungeon crawlers, most of the game is spent clearing out confined areas while searching for a way to move onwards. Usually, this involves finding colour-coded keys, pulling levers, powering up switches with batteries or even blowing up walls with pre-placed C4. There are also tons of secret areas that you can find, but I found the vast majority of them to be extremely easy to spot, as they can easily be distinguished by cracks on walls or by a constant whistling sound of the wind. Each level also tends to have at least one challenge room, which is essentially either filled with traps and obstacles or requires you to go through some sort of jumping puzzle in order to reach the end and acquire some much-beloved loot. 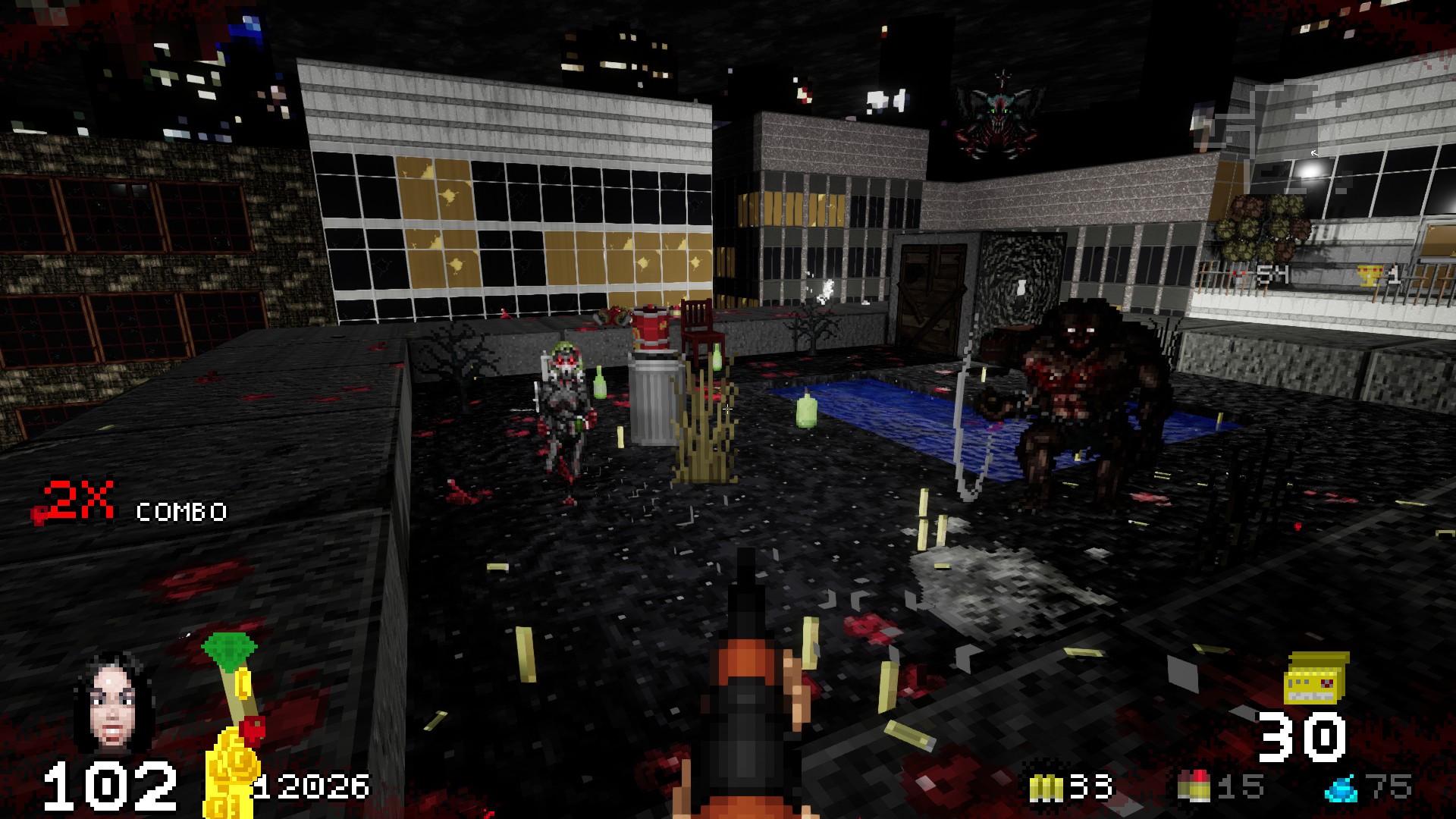 In any case, I have to admit that, at first, the level design of Nightmare Reaper was a bit of a letdown. This is a game that, once complete, will be perfect to be played through multiple times, but despite the levels being the result of a mixture of random generation and handcrafted layouts, you’ll still end up running into familiar room layouts. Now, having said that, a lot of levels in Chapter 1 can feel quite bland, mainly because there can be a lot of rooms with nothing but enemies in them. While the levels in Chapter 1 can feel flat a lot of times, this feeling is completely gone once you reach Chapter 2, as the game becomes much more intricate and diversified. Furthermore, you also get a grappling hook which lets you move around much faster and cling to walls. This tool not only becomes necessary to get past some of the environments that you’ll be facing Chapter 2, but it also completely changes the whole gameplay experience, as you can use it to get away from enemies or bring yourself within melee range.

Now, a first-person shooter can only be as good as its weapons and shooting allow it to be, but luckily, this is something that Nightmare Reaper absolutely nails. There are currently 58 weapons in the game, and every single one of them comes with an alternate fire mode, although in some cases that is simply aiming down the sights. The weapon variety is actually insane, and it’s even crazier given that the weapons can come with different rarities and status effects. From pistols with explosive shots to life-stealing magical staffs, miniguns with electrical shots, black hole and mini-nuke launchers, melee weapons such as knives, dual axes, katanas, claymores and whips, pump-action and automatic shotguns, bolt-action rifles, grenades, there’s just so much to choose from. There’s even a “puzzle box” which is essentially a Pokeball, as it allows you to capture an enemy to fight alongside you.

Sure, some weapons are outright better than others, but pretty much every single one of them feels great to use, as you can definitely feel the kind of power that they have. Both sound and visuals play a crucial role here, as seeing enemies disintegrate into bits is just as satisfying as hearing the crunching sound of hitting enemies with a shotgun in close quarters. Thanks to the game’s pixel art style and the fact that the game runs on the Unreal Engine, Nightmare Reaper manages to pull off some really great-looking visual effects, as well as enemy dismemberment. With that said, a lot of times there can be a lot going on the screen, and I honestly think that the number of effects should be toned down for the sake of better visibility. On top of all the weapons, there are also power-ups that pretty much turn into an invincible killing machine, whether that be by giving you insane magical powers, increasing your rate of fire, slowing down time for everything besides yourself, or summoning a reflection of your weapons, which pretty much means that you can actually be dual-wielding P-90s twice, as in, have a total of 4 P-90s in your hands. The game might be called Nightmare Reaper, but it sure as feels like an FPS fan’s wet dream come true.

If there’s one thing that Nightmare Reaper pulls off absolutely brilliantly besides its shooting, it’s the fact that one second all you can hear is this eerie music playing in the background as you move around, but as soon as you open the door to a room full of enemies, the mood quickly changes as the game’s absolutely banger of a soundtrack kicks into ready you up for some brutal action. All of this is made possible thanks to Andrew Hulshult, which some people might know, thanks to his work on DUSK, AMID EVIL, and on DOOM Eternal: The Ancient Gods expansion. His work is so good that not only I’m looking forward to the next Nightmare Reaper update to actually play the game, but also to listen to more of its soundtrack. 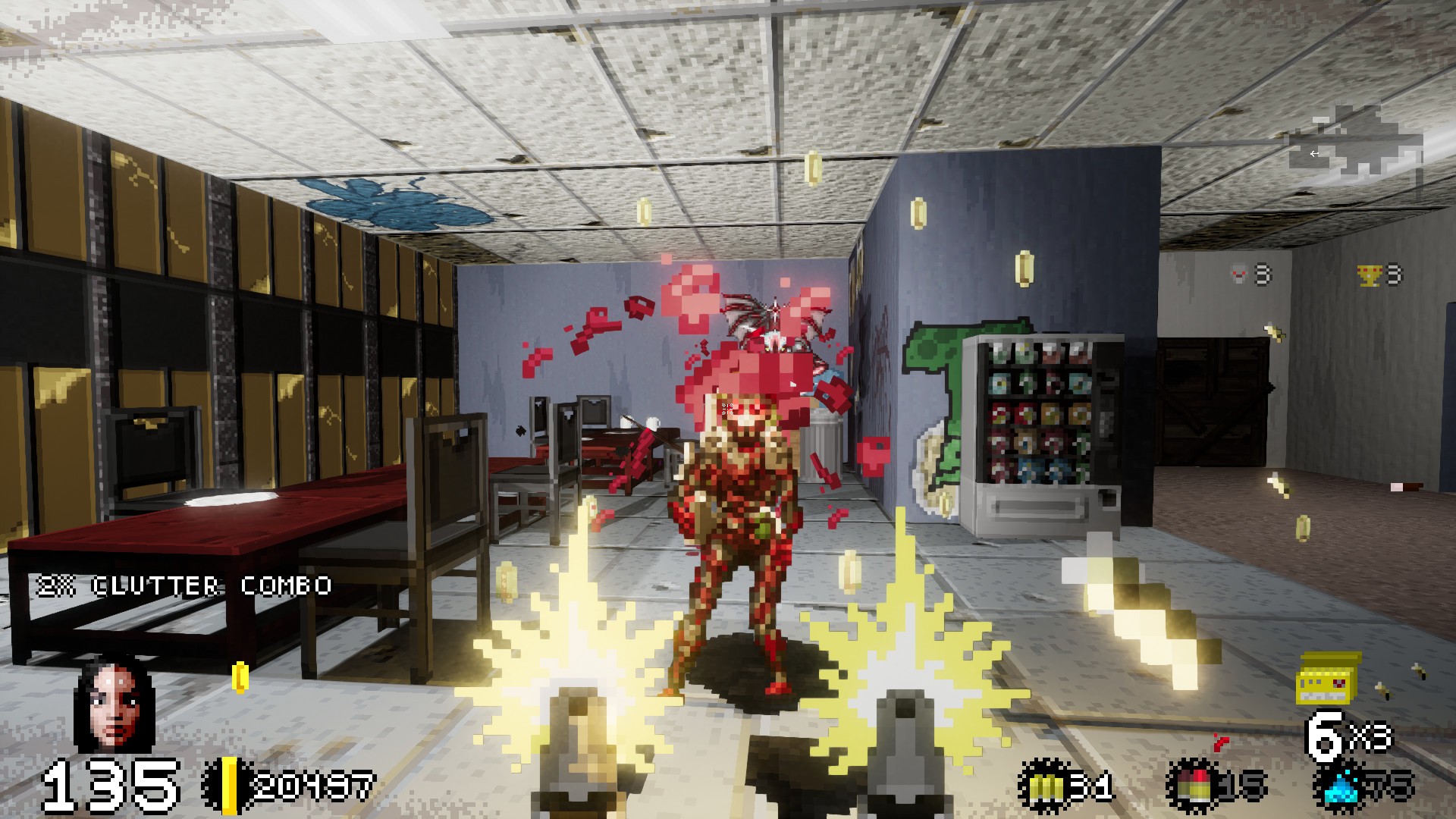 Nightmare Reaper’s skill tree is probably one of the most unique things about the whole game. In a way, this makes it weird to figure out what the game is actually trying to be, if it’s more of a streamlined FPS experience revolving around a campaign, or if it’s attempting to be something more like a roguelite. Basically, in order to unlock a new upgrade, not only you have to pay for it with gold that you find as you play, but you also have to beat a level in a platformer mini-game. Sure, this whole thing is completely unnecessary, but I think it makes it feel more unique and memorable, but I completely understand if someone were to say that it doesn’t really fit in the game.

The main reason as to why the skill tree makes it confusing to figure out what kind of FPS Nightmare Reaper is trying to be, comes from the fact that, although the game has everything that would make it a perfect game to play through many times over, once you reach the end of Chapter 2, the game just ends. There’s no option to keep playing endlessly, no NG+, nothing. Initially, I even thought that if you died, you’d have to start all over, but you actually just restart at the beginning of the level where you died. Speaking of which, as far as difficulty goes, I didn’t find the game to be that challenging. The first boss didn’t even manage to attack me before I defeated it with a railgun, and it was only on the second boss that I died for the first time. It took me about 16 hours to beat Chapter 1 and 2, and while there’s currently nothing else for me to play, the game is still missing the final third chapter, and the developer has also said that new modes will be added once the game’s campaign is complete. This gives me hope that the game’s skill tree and the random generation system will be put into better use in whatever modes that will be added in the future.

Despite being in Early Access, Nightmare Reaper is already a blast to play, and I honestly can’t wait until the game receives its next major update. Just a few weeks ago, the game received a huge update which introduced Chapter 2, which, according to the developer, added 27 new levels, 25 new weapons, 15 new enemies, and plenty of other stuff. If you don’t like the idea that the game abruptly ends and doesn’t allow you to keep playing, you might want to wait a little longer before picking this up, but if you’re just a hardcore FPS fan, I honestly don’t think that you can go wrong with Nightmare Reaper. It went from being a game that I was mildly interested in, to being one of my most anticipated titles.