Home
/
Blog
/
The Wii U is Dead. Don’t be an Idiot!‏
Share Review 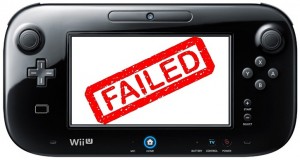 I hear it every year just before Christmas; punters and pundits alike telling me how Manchester United are playing poorly, how their squad lacks the depth of its closest competitors, how some other team is going to run away with the league……..fools! Have people not watched the Premier League for the past 20 odd years? It’s always the same; they’ll find form, hit their stride and, come hell or high water, be, at the very least, in with a shot of the title right up to the wire – I’m simply amazed out how short some people’s memories seem to be.

The same is true of the Wii U; it’s dead in the water, it’s finished when the PS4 and next Xbox show up……..again……..fools! I suppose nobody was alive for the launch of the 3DS? Believe me, the Wii U will be following the same sales trajectory. I’m not saying that it will be as big as the Wii (that truly was a phenomenon), but in terms of achieving solid sales and building up a solid user-base, well, you sir can take that to the bank. The Wii U might not be selling well at the moment (it’s hardly selling at all to be honest), but hey, what do you expect? There are literally no games for it.

Yes, New Super Mario U is a very enjoyable title and arguably the best 2D Mario since Super Mario World, but to the average gent on the street, looks like the same game that was released on the Wii back in 2009, and yes, Nintendo Land is great fun, but until it’s actually in your hands, is a much harder sell and certainly not as immediately innovative as Wii Sports. Then there is ZombiU – a solid game if ever there was one but surely destined to be ‘that other title you bought with a Nintendo game’.

And honestly, that’s about it; ports aren’t going to sell Wii U and even those exclusive titles sitting just beyond the horizon (Bayonetta 2, Wonderful 101 etc) aren’t the kind of games that will shift hardware.

Mario Kart though? Super Smash Bros? How about a new 3D Mario or Zelda? Yep, these are the games that are going to shift Hardware (as always) and regardless of what Microsoft and Sony bring to the table will inevitably sell by the bucketload.

Wii U is struggling, but that won’t last forever. The level of third party support will remain sketchy until those sales figures start rising, but come that first big wave of first party product, you can bet your bottom dollar that those sales will indeed start to rise quite dramatically.

I love Nintendo as much as I hate Manchester United, but one think I can assure you off is that both will be around for quite some time and both will do just fine…….I’ve given up on my dream of seeing Manchester United relegated to the Conference North.