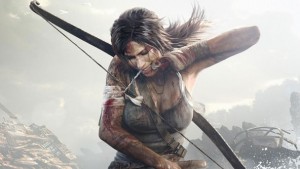 Misplaced chivalry? Underlying sexism? Commitment to the character? Violence within a more grounded setting? Whatever the reason, I think that most would agree that the somewhat brutal death animations in the recently released Tomb Raider reboot are more affecting than your average videogame death. From massive head trauma to spikes through the neck, watching Lara struggle frantically in her often disturbingly unpleasant final moments is no easy watch.

As a seasoned gamer, I’ve become somewhat numb to videogame violence over the years. Sure, Leon being decapitated for the first time in Resident Evil 4 was as vicious as it was unexpected and that whole eyeball drill thing is Dead Space 2 wasn’t exactly agreeable, but while they certainly delivered a sense of initial shock, it was always offset by mild amusement and an ‘oh my God!” followed by a silly grin and a gentle chuckle.

Not in Tomb Raider though. You might get the “oh my God!” out of me, but that certainly won’t be followed by a wry smile or a sneaky giggle. Death in Tomb Raider is not fun. Not in the slightest……..that’s not necessarily a bad thing though.

It could certainly be argued that the death animations are a little over the top, but in defence of the development team, here, it actually feels justified. At first, I wasn’t sure if it was simply down to Lara being female, but honestly, I think it’s more to do with me actually caring about the character. Yes, Lara being female still plays a part (I’m simply not accustomed to seeing such a believable female character subjected to such outright brutality), but the fact remains; thanks to those opening hours, thanks to her being a fully developed character (no pun intended); seeingLara die hurts. It hurts a lot. I care what happens to Lara and seeing her suffer because of my incompetence is not a pleasant experience.

It’s a tough way to teach gamers how to be careful, but by God, does it ever work. Fall into the rapids……won’t do that again. Caught off-guard…….won’t do that again. Wholly unpleasant, yes, but the threat of death is nonetheless given the kind of gravitas usually reserved for the likes of Demon’s/Dark Souls. Yes, it’s a very different approach, but believe me, losing my progress and loot was bad; seeing Lara die yet another grizzly death might be even worse.