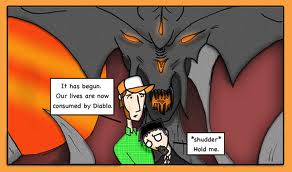 The Diablo series has been around for quite a while now, but for many console gamers, myself included, this will be their first time experiencing Blizzard’s outrageously addictive collect-a-thon. Sure, there was a PS1 port of the original Diablo, but that release was many, many moons ago, and anyway, this is the first time that we have arguably been provided with a product that is largely the equal of its PC counterpart, a product that some might even argue surpasses the quality of the personal computer original.

That of course is up to debate, but what isn’t is just how addictive Diablo III can be. Sure, plenty of videogames are addictive, but there’s something about Diablo III that goes beyond everyday gaming addiction, something that borders on the, dare I say, evil.

No videogame before has so brazenly played up to the addictive habits of gamers. Diablo III‘s focus is laser sharp, cutting away all of the unnecessary systems, road blocks, and to a large extent, story elements to ensure that nothing gets in the way of the gamer’s on-going quest to pick up all of the shiny things. Sure, there’s a story here, but it’s mostly mince, largely irrelevant and stripped almost to the bone. This is a game that wants to keep you moving, keep you killing enemies and smashing boxes, and as far as I’m concerned, is all the better for it.

Yes, it may be a form of evil genius on the part of Blizzard, but by unashamedly stripping away all but the essentials, they have created a game in which enjoyment becomes almost irrelevant. Honestly, I’ve finished the game once already and I still have no idea if I actually enjoy it – all I know is that I can’t stop playing it. The combat system is solid if basic and the gameplay is repetitious in the extreme; kill the bad guys, smash the boxes, pick up the loot, rinse and repeat. This is basic stuff, and while it is more than the simple button masher it initially appears to be, in comparison to the Bayonetta’s and DmC’s of this world, Diablo III’s core combat is almost outrageously simple. 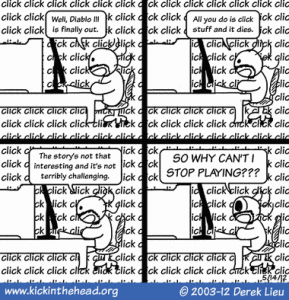 That doesn’t matter though…..it has the shiny things. Oh yes, it has many shiny things, and if you’re like me, you’ll want…..nay, need, to keep collecting, to keep progressing, to see those numbers next to your shield, sword and random items of swanky jewellery slowly rise a bit of a time. It’s a game that is so aware of gaming habits, so aware of its strengths that, despite being a solidly built video game experience, is almost completely reliant upon the compelling nature of collecting.

Whatever your views on Blizzard’s, Diablo III, there is no doubting that it’s good at what it does. It plays to our most fundamental needs as gamers by constantly dangling a carrot in front of faces and insisting that we push on. Is it repetitive? Without question. Is it simplistic? Certainly? Is it enjoyable? That’s debatable? Can I put it down? Not on your life!