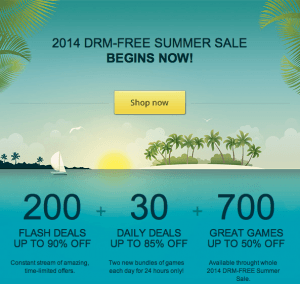 The World Cup may be in full swing but PC gamers who can tear themselves away from their TV screens are in for a treat over the next few days.  The more well-known Steam Summer sale starts later today (June 19th), but in the meantime the GOG.com (Good Old Games) sale is already fully underway and there are some real bargains to be had.

For those unfamiliar with GOG it has a catalogue of 750+ games and while most of them are classic older titles, there are also a growing number of modern games available.  But perhaps its most significant feature is the complete absence of DRM – a factor which continues to attract a lot of new customers.  And even with this month’s introduction of a dedicated installer client, GOG Galaxy, the games will remain DRM-free (and the client will be optional as customers can choose to simply download the games directly).  However Galaxy promises to offer bonuses to users, with early access to betas and cross-play with Steam users, and potentially other clients in the future.

The current sale has been running for 5 days with hourly flash sales, 2 special deals each day, a number of bundled offerings and at least one free game.  The current offerings listed below will expire on Thursday 19th June 2pm GMT, although you’ll have to check yourself for the various hourly sales.

So PC gamers, do any of the above interest you?  Or are you saving your money for the Steam sale?