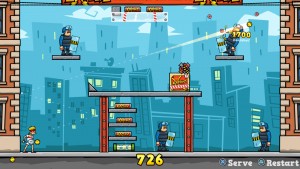 It’s fairly obvious right from the start that Tennis in the Face, from developer 10tons Ltd, was initially developed for handheld devices. Aside from the basic, cartoonish graphics the game mechanics are incredibly basic and each level is very brief (many can be completed in seconds). Perfect for a quick game on your phone while waiting for the bus perhaps, but it’s not exactly the sort of game you’d expect to be playing on your TV.

However game origins don’t matter as long as the actual gameplay is enjoyable, which accounts for the huge sales figures of certain phone and tablet titles. And washed-up tennis star Pete Pagassi’s battle against the evil energy drink company ‘Explodz’ that destroyed his career and now threatens to addict the world certainly is a fun affair. Each 2D level involves serving a limited number of tennis balls from a set location to ricochet around the environments and hopefully take out all the required enemies. Over almost 100 levels this formula doesn’t change (with the exception of an occasionally being able to use a can of exploding fizzy drink instead of a tennis ball) , but despite this the ‘one more go’ factor remains strong throughout.

Tennis in the Face clearly draws much of its inspiration from the handheld classic Angry Birds, although here you can only vary the direction of your serve and not the power. The physics-based gameplay requires a degree of skill but luck can be just as important, and even watching a wayward shot bounce around the screen and bringing unexpected success can be mesmerising. In large part this is due to the humour of watching the ragdoll enemies be sent flying, often taking out more enemies in a domino effect. However this can also end up being one of the games weaknesses as although some levels have to be completed in a certain way, others are more open and plenty of levels I won on my first attempt purely down to fluke. 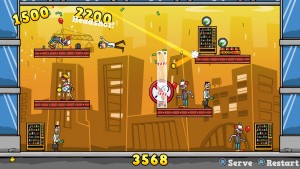 Some levels are far more challenging however, but luckily you are given some freedom in being able to choose from a number of levels in each stage – and only a certain amount of levels in each actually need to be completed in order to progress. This only changes for the final 15 levels which must be completed in sequence, and disappointingly these last few levels are just repeats of the earlier levels. You’ll also find that the enemy types start to be repeated after the first few levels, and that there isn’t a great deal of variety between them anyway.

There are a few more minor irritants such as the awkward map and the fact I didn’t have a ‘quick restart’ option until I accidentally found out towards the end of the game (it’s triangle by the way).

Still, smashing tennis balls at clowns, lawyers, riot police, FBI agents and hipsters never gets old – especially with head shots and the way they drop certain items when hit such as balloons, money and doughnuts. This quirky sense of humour is complemented by the newspaper headlines that accompany your rampage (also let you know the year is 1996) and of course those bright, charming visuals. The evil energy drink Explodz even have their own website for those inclined to search for it. 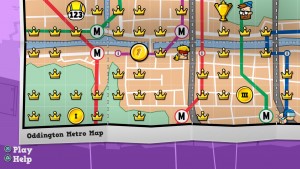 Longevity-wise there isn’t a great deal to bring you back to completed levels. Finishing with a ball to spare does award you with a crown for each level which is quite compelling, certainly more so than trying to beat your high score. Otherwise, with an unlimited number of attempts you’ll probably burn through the whole game in a few short sessions, but it’s definitely fun while it lasts.