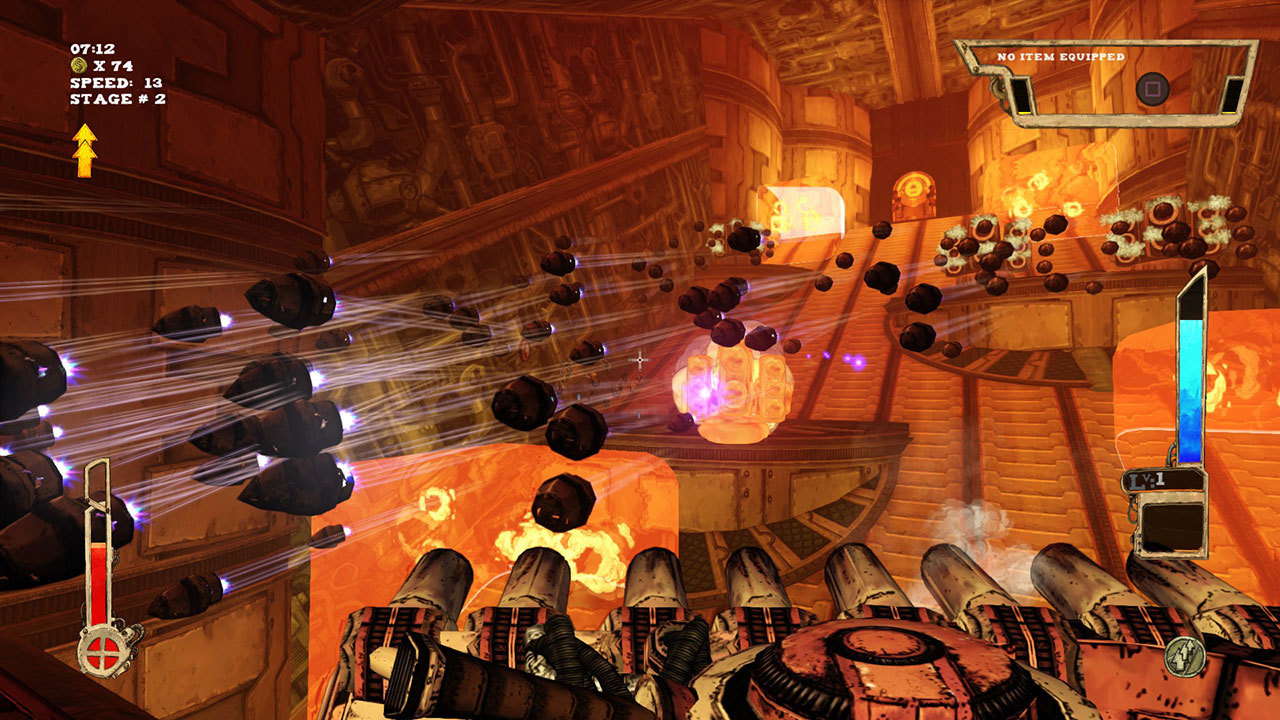 Tower of Guns is a fast-paced, bullet-hell, first person shooter with randomized levels and enemies, power ups, epic bosses and tons of unlockable items and weapons. It made its debut on the PC last year and at the time it’s refreshingly frantic and simplistic premise struck a responsive chord with gamers and won developers, Terrible Posture Games, much critical acclaim. So no surprise then that Terrible Posture Games & Grip Digital have decided to introduce Tower of Guns to the next-gen console.

Although far from perfect, the result is an offering that will keep you glued to your console for hours at a time. The premise behind Tower of Gun is sublimely simple: you work your way through a 14 floor tower with rooms filled with turrets. To beat the rooms you have your pick of a limited number of weapons; machine gun, pea shooter, a spread shot weapon and, if you’re feeling particularly medieval, a weapon that fires saw blades. 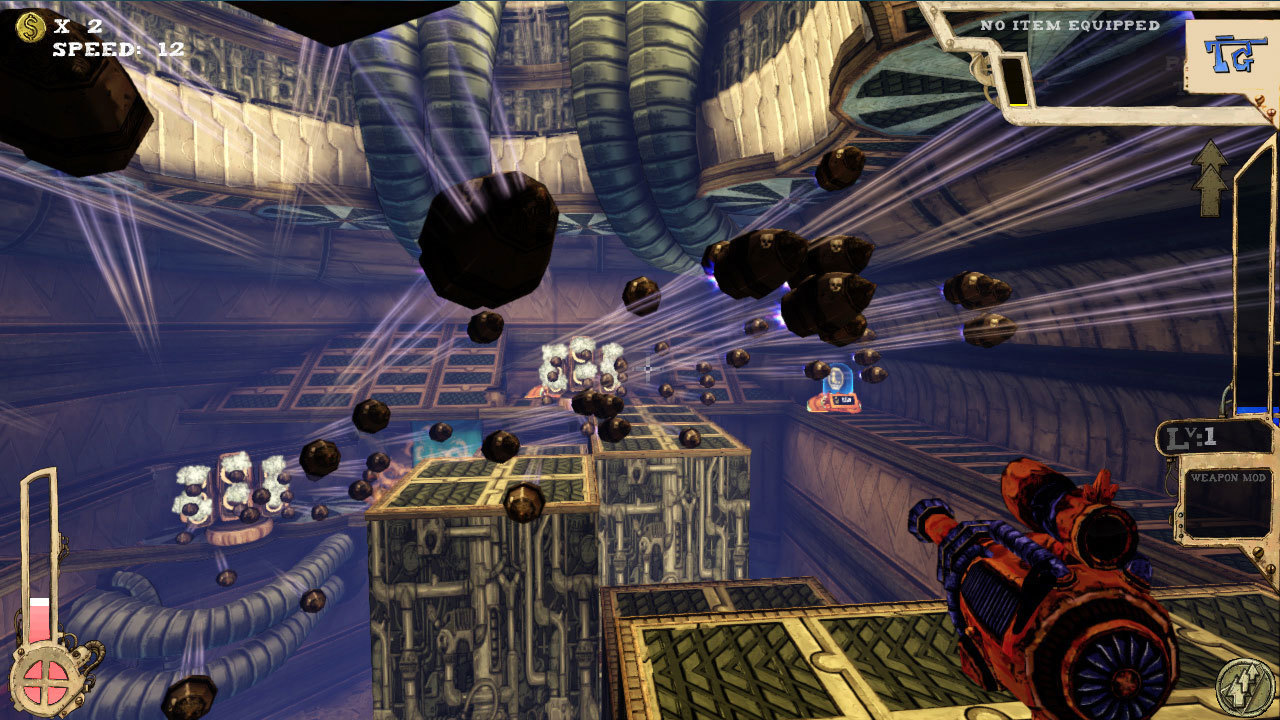 One of the game’s most notable unique selling points is in the fact that, after you die, you regenerate in a different room with randomised enemies every time. So, simply memorising the position and timing of turrets is not an option. This means that every time you play, Tower of Guns offers you a unique experience that challenges you to change your playing style to match the room you find yourself in. Another aspect that sets Tower of Guns apart from other shooters is in its use of the dreaded permadeath. There are mid-game saves. If you die, you start over from the beginning.Period. Harsh? Perhaps. Challenging? Definitely.

Although far from being the toughest game on next-gen consoles, boss battles in Tower of Guns can be pretty white knuckle affairs and dying just before the end only to start over can prove very frustrating. On the flip side, the game does allow you to choose a perk just before the shooting starts which can greatly improve your chances of survival. The perks range from no fall damage to greater health and lower difficulty. Enemies also drop varies items as they die which you can use to upgrade your weapon as you work your way through the level. Sweet. 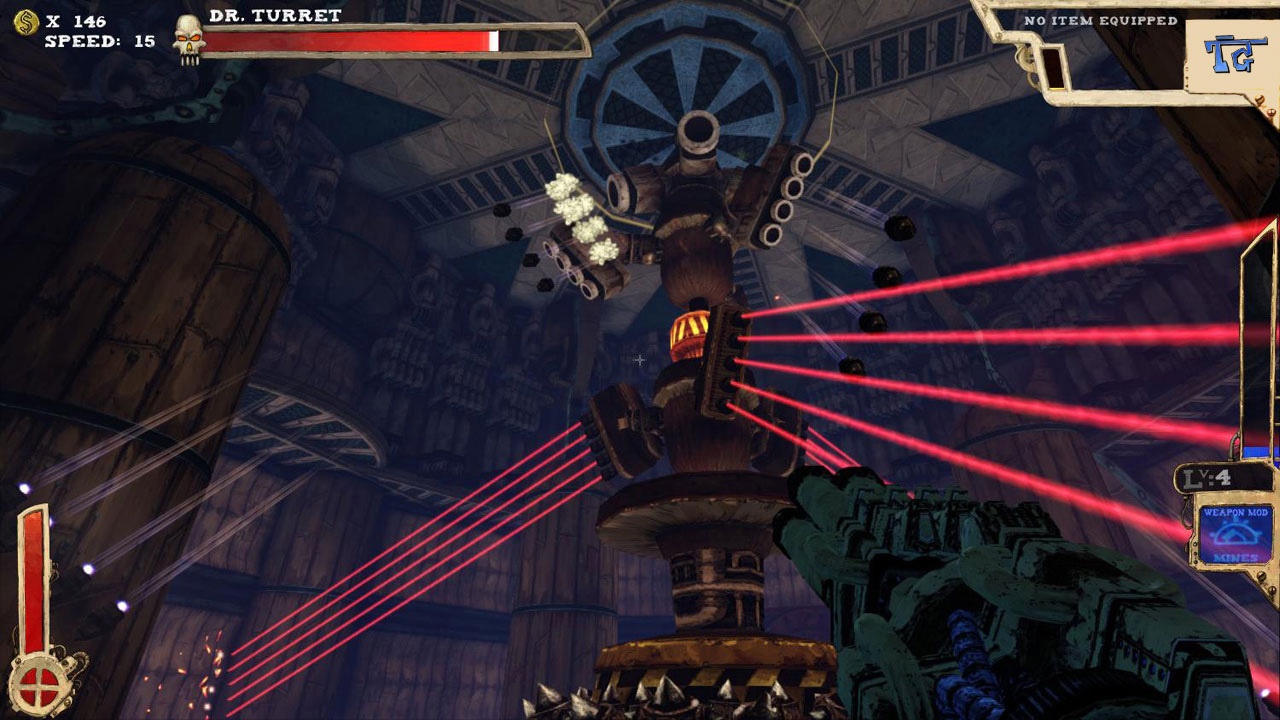 Graphically Tower of Guns looks fantastic. The game uses the semi-cell shaded style of Borderlands and weapons, environments and explosions all have that comic book look that works so well.  Tower of Guns also does a great job in the sound department although we found that, after a while, the constant sound of gunfire and explosions, began to grate after a few hours gameplay. Another niggle we had with Tower of Guns was the absence of any multiplayer option.

If any game on next-gen consoles lends its self to being a multiplayer experience, it’s Tower of Guns. We desperately wanted to get our mates to team up and wade through the levels together and perhaps even take them on as well. But, no. Sadly Tower of Guns is a strictly solitary experience. However, as a single player game, Tower of Guns is a frantic, noisy, adrenalin rush that will delight first person shooter fans. It’s by no means a triple-A classic but, for something to play for an hour or so, Tower of Guns is a great arcade shooter. Let’s hope that as the Tower of Guns fanbase grows, Terrible Posture Games will continues to develop the title with add-ons and more upgrades.