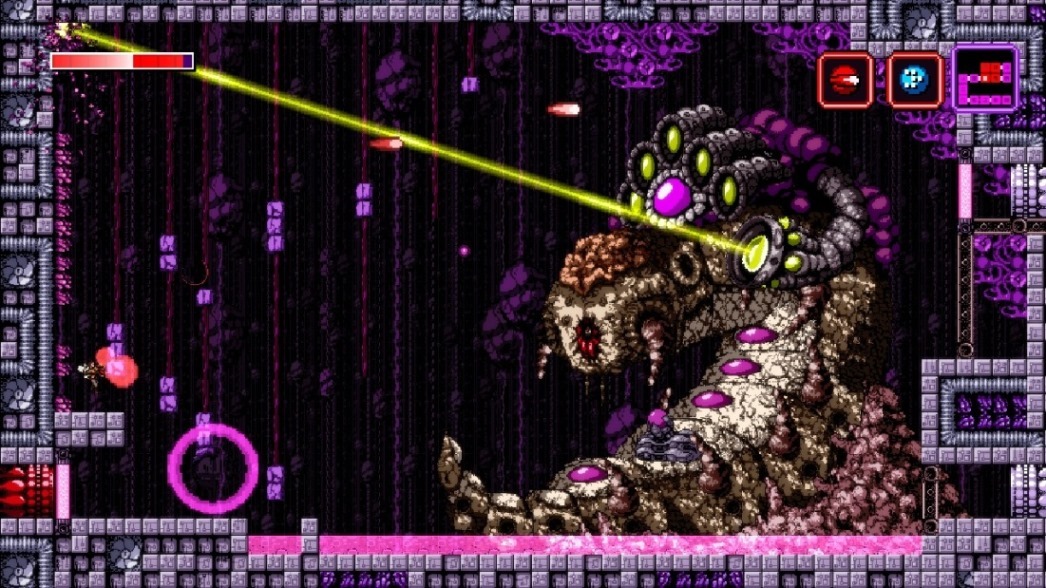 Axiom Verge is a very good Metroid clone, but make no mistake, it is just that – a clone. Yes, it’s an extremely enjoyable experience in its own right, but at what point should we start expecting more from Metroidvania games than an almost slavish commitment to mechanics and design that were established more than 20 years ago?

In fairness, asking anything more in this case might be a little unfair given the fact that Axiom Verge was actually made by just one man, but still, the question must be asked. Tom Happ has somehow managed to create this entire experience on his own, something that is undeniably worthy of note, and the fact that the game also happens to be very good is yet another in a relatively long list of minor miracles. Still, while it might be a technical marvel, there is ultimately no denying that this is a clone of a game released in 1994, one that, despite its many positives, can’t come close to matching its primary inspiration.

Again, it’s easy to go back to the fact that just one man-made this game, but from a commercial perspective, that has to be ignored in the critical appraisal of this game – after all, one man or not, we are still being asked to pay the same amount we would have had it been developed by a team of 20. So, let’s make this clear nice and early, this game being made by one person is an undoubtedly amazing achievement, but one that will have absolutely zero bearing on the score at the bottom of this review. 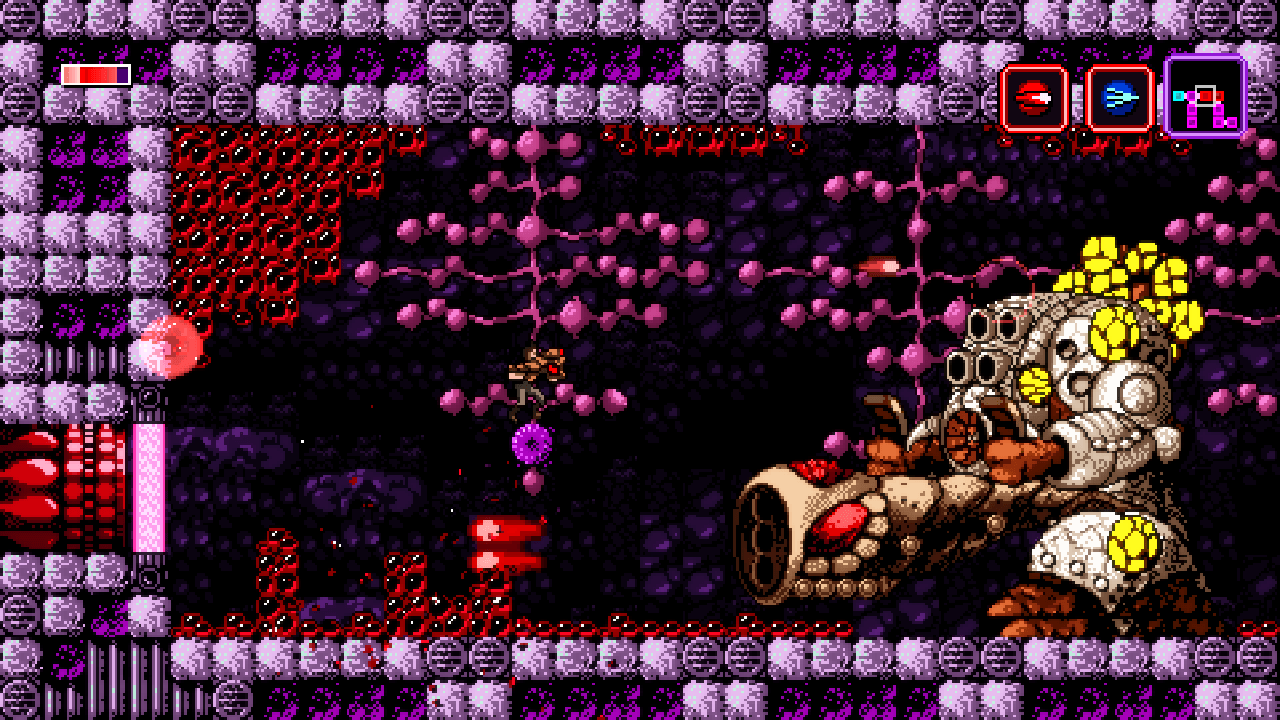 Axiom Verge is the latest release in a long line of retro-inspired releases that ape both the look and feel of games created in the last 80s and early 90s. While there is nothing wrong with that per se, I for one prefer when new releases taking inspiration from older games at least attempt to bring something unique to the genre. Take Shovel Knight for instance. Sure, it’s clearly inspired by NES era gaming, but as an experience, it’s so much more than a simple copy and paste job of what has come before. Now, I’m not saying that Axiom Verge is a cut and paste job by any stretch of the imagination, but other than a handful of cool new weapons, there is very little here that hasn’t been done before, and in my opinion, done better.

Saying that, it’s not like Nintendo are throwing Metroid games at us right now, so if all you’re looking for is a close approximation of Super Metroid, complete with grotesque enemies, huge boss battles and very smart level design, Axiom Verge will undoubtedly deliver in spades. It can’t quite match Super Metroid’s brilliant artistic design and the visuals are arguably a tad flat, giving the game the air of a PC Engine release rather than a Super Nintendo one, but despite these minor issues, this is nonetheless a fantastic throwback and a largely successful homage to one of the greatest games ever made. It’s a bit too ‘chatty’ for my tastes with exposition thrown around in place of the carefully constructed ambience of Super Metroid, but this is still a mostly lonely affair in which you are left to figure things out for yourself with the usual array of locked doors and blocked paths between you and your ultimate goal.

As similar as it is to Super Metroid, the one area that Axiom Verge might have the edge is in its weaponry. While many represent approximations of what has come before (right down to the Morph Ball), Axiom Verge certainly has a few tricks up its sleeve. The most obvious of these is the Address Disruptor which transforms glitching areas of the scenery into useable platforms and ledges but also doubles up as a weapon that can turn enemies against each other or even turn their bullets in to health packs. It’s probably the most memorable weapon in the game, but along with the drill, is one of many weapons with more than one use. 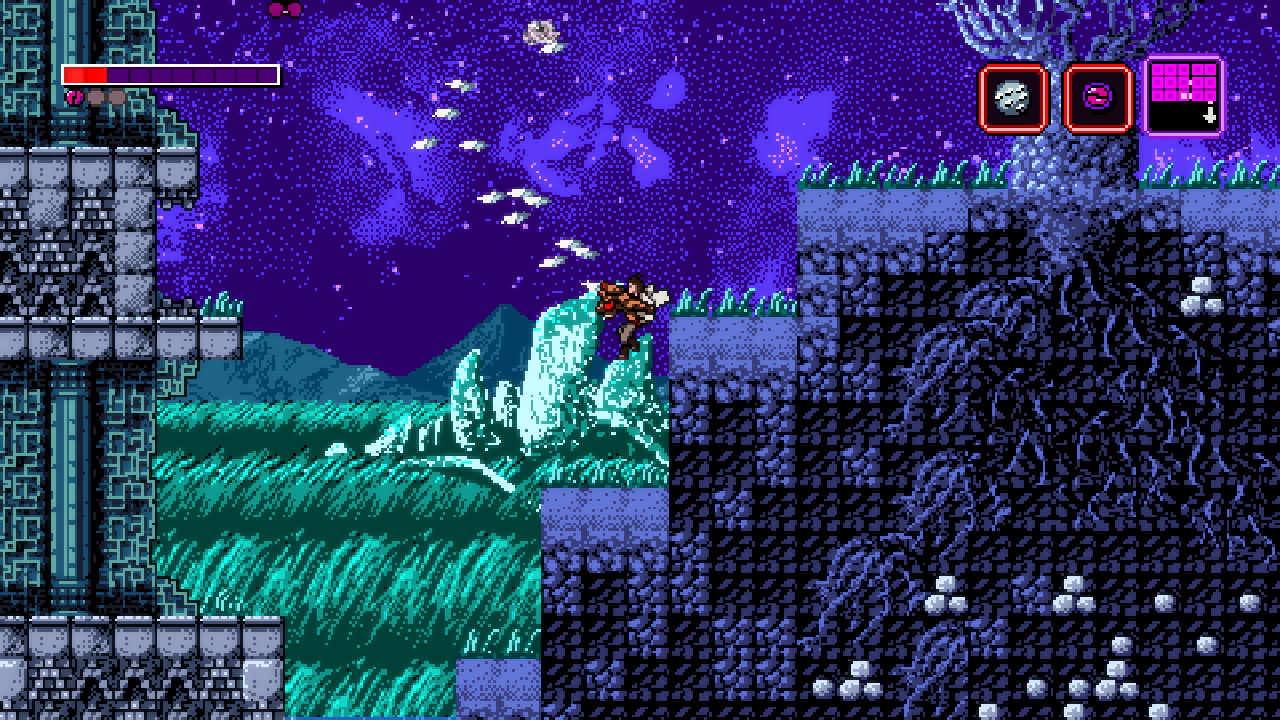 While the array of weapons at your disposal and their multiple uses are an undoubtedly great addition to the game and arguably its stand-out feature, there is a downside to this extended armoury in that exploration can subsequently become a game of repetitive trial and error. With so many weapons to choose from, there are times in the game in which you’ll find yourself having to go between a host of weapons as you try to find the right one for the job. It’s not game breaking stuff by any stretch, but it can ruin the otherwise excellent ebb and flow of the experience with progress too dependent upon an often laboured search through the ever-growing weapon wheel. The other issue is one of sheer accuracy – the relatively simplistic shooting mechanics work just fine for the most part, but as soon as you’re asked to jump and shoot at the same time, things can quickly become a tad frustrating as you fight against the somewhat clunky controls. Again, hardly game breaking stuff, but it does outline the difference between this and the finest examples that the genre has to offer.

It’s not without its faults and certainly suffers from a general lack of new ideas, but Axiom Verge, with its great boss battles, solid art design and enjoyable Metroidvania-style gameplay, delivers an otherwise fantastic throwback to 16-bit era gameplay, and if nothing else, admirably fills the gap left by Nintendo’s unwillingness to return to the much-loved Metroid universe.

It never quite matches the quality found in, well, any of Samus’ 2D adventures, but judged upon its own merits, Axiom verge offers a largely enjoyable slice of retro-inspired gameplay for those tired of waiting for Nintendo to pull their finger out. Brilliant in many respects and flawed in many others, Axiom Verge serves to remind just how great the Metroid template is and how disappointingly little the genre has moved forward in the past two decades.