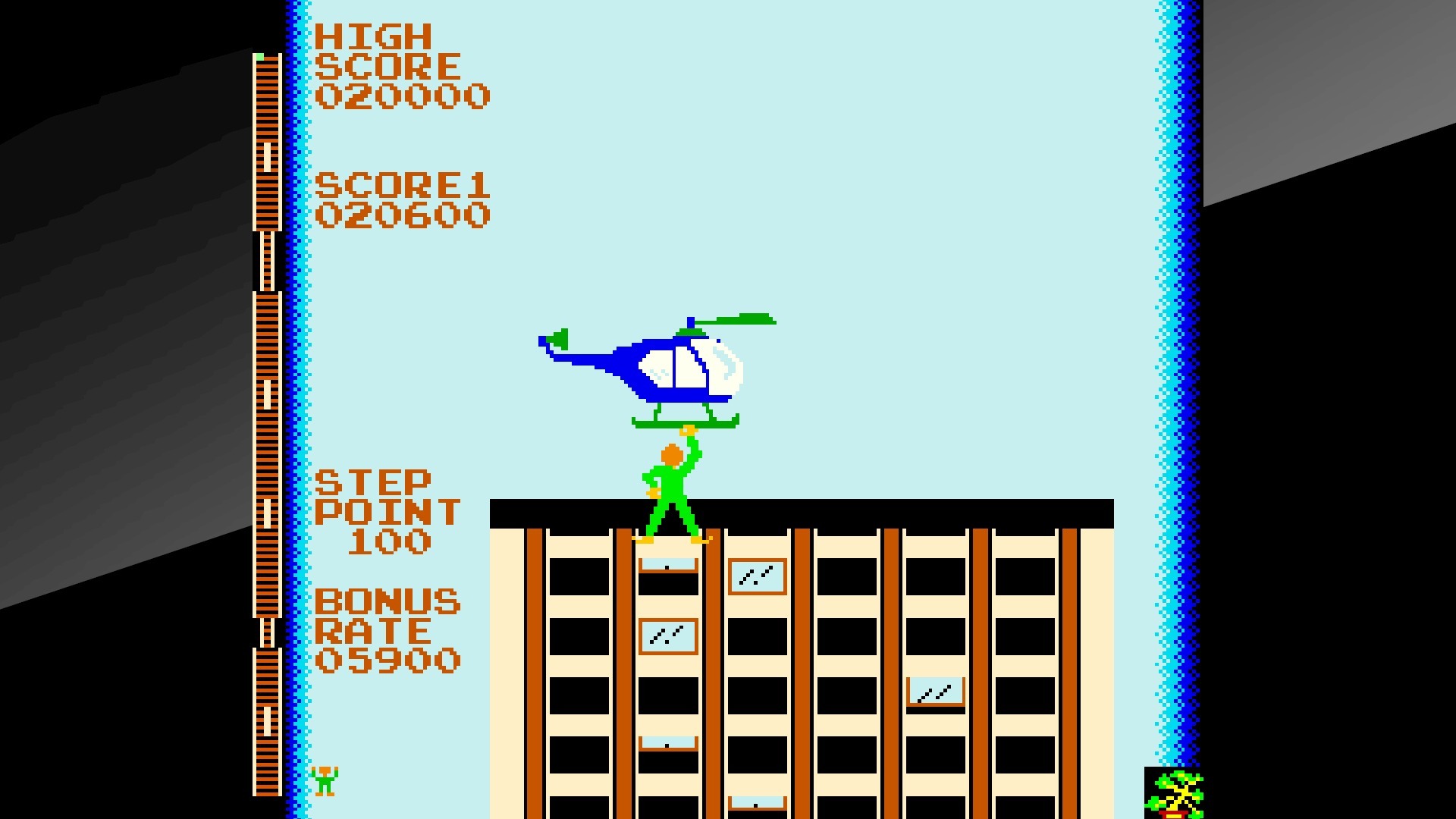 I’ve never really thought about it before, but what exactly is retro? It’s an oddly nebulous concept – for me, it’s anything from the NES period through to, hmmmmm, let’s go with the N64. That’s just me though – there are younger gamers out there (more than I would care to admit) who would almost certainly consider the PS2 as retro. Heck, there might even be a few dragging the Wii or 360 into the mix. Whatever your view though, whatever your age, there is simply no arguing with the fact that Crazy Climber is retro. It’s retro as f*ck.

Released in arcades by Nichibutsu way back in 1980, Crazy Climber might even go beyond the modern concept of retro and instead be considered by many as just plain old. It certainly looks every day of its 35 years. Despite being an arcade game, when I think of it, I tend to think of the Atari 2600 – it just has that look and feel about it. I assure you, this perfect Arcade Archives port is far better looking than the shocker that made it to the 2600, but again, while it certainly has a unique aesthetic charm, there is no getting around the fact that this game looks decidedly old-fashioned. 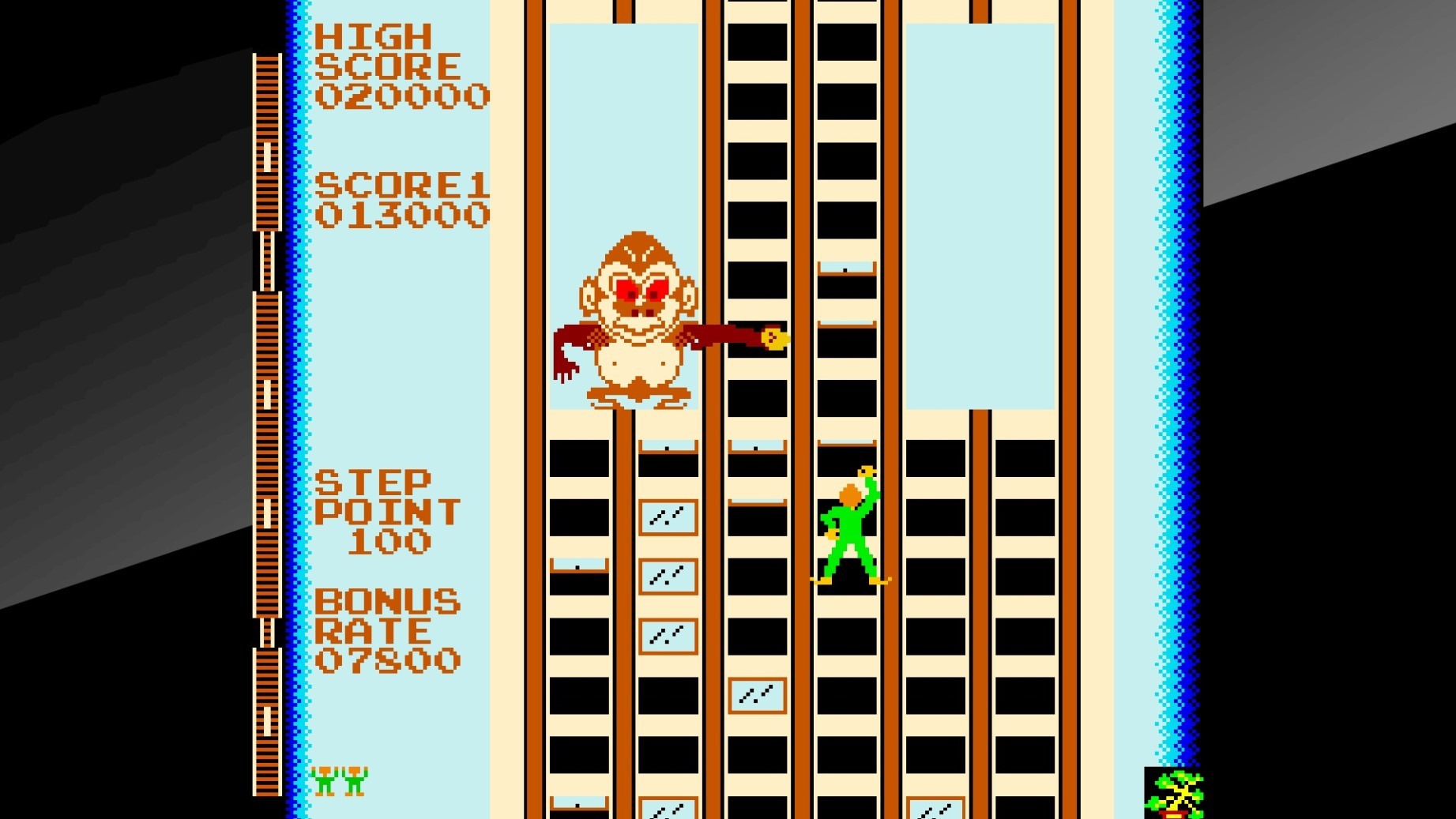 Still, get past the extremely basic visuals, and you’re actually left with an oddly addictive video game. The control scheme certainly takes some getting used to, but again, like the visuals, the somewhat idiosyncratic control scheme is big part of the games’ ultimate allure. The basic concept is as simple as you’ll find anywhere – climb a building. That’s it. Climb as high as you can without falling or being struck by one of the many inconvenient projectiles being aimed your way. The thing is, rather than simply controlling your, well, crazy climber, you instead find yourself in control of each of his arms via the left and right thumbsticks.

In fairness, that does make perfect sense on paper, but in practice (initially at least), it feels incredibly awkward. I got absolutely nowhere on my first few attempts and sometimes appeared to fall with nothing at all around me. Stick with it however and you’ll be rewarded with a strangely compelling gaming experience. Whether that experience is worth £7.99 is up to debate, but price aside, Arcade Archives Crazy Climber’s odd control scheme and (very) retro charm proved rather addictive. 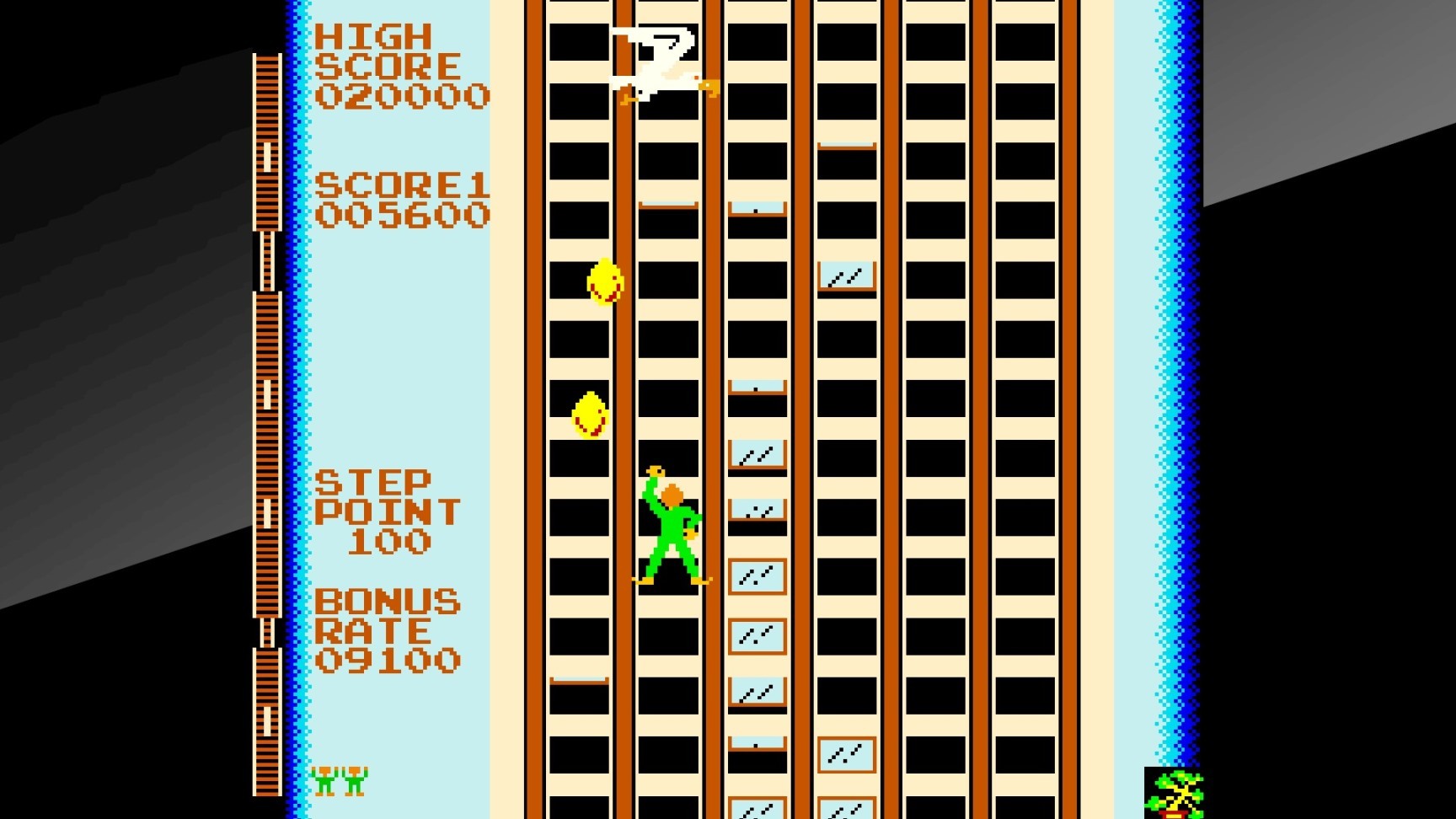 It makes a horrible first impression, it’s initially terrible to control, it’s too expensive and the overall package is almost embarrassingly basic (no extras or unlockables to be found here folks), but despite these issues, I for one found Crazy Climber an addictive and largely enjoyable experience (once I had wrapped my head around the unique control scheme that is). Many will struggle to get past the 35-year-old visuals while others won’t get past that initial learning curve, but despite its issues, Crazy Climber is worth persevering with. Of course, those with fond memories of the arcade release will inevitably get the most out of the package, but even if you’re just a fan of retro or arcade gaming, Arcade Archives Crazy Climbers simplistic but addictive charms might well be worth a look.