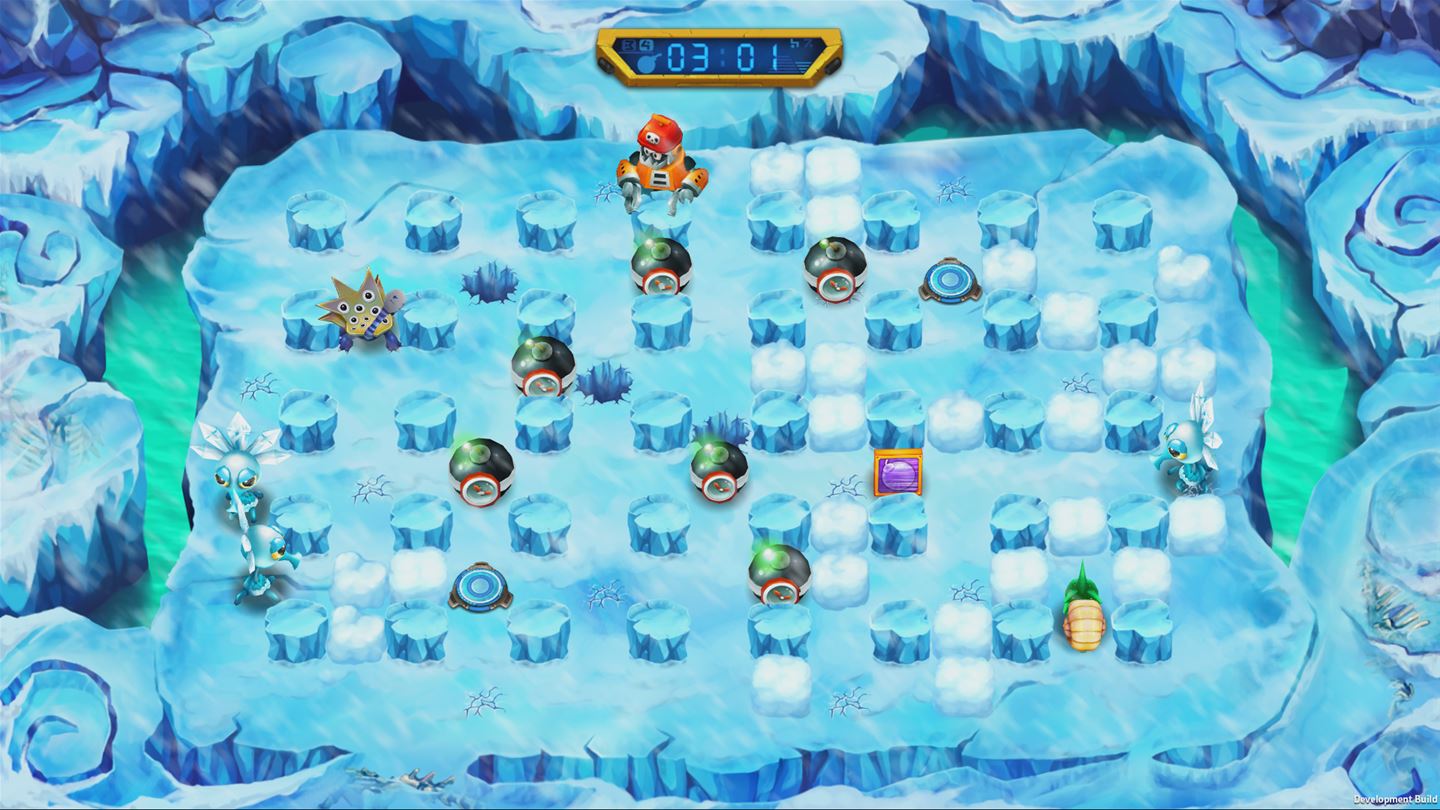 If Bombing Busters wrote this review, it would have taken a review written by a well-known retired games journalist, changed a couple of the words, removed a couple of paragraphs that you would expect to find as standard and then publish it unashamedly as it’s own piece of work.

This is the classic Bomberman game with nothing more that nip and tuck in terms of cosmetics and music with the same gameplay you would come to expect from the dearly departed Hudsonsoft. Though in fairness the last time I play the classic Super Bomberman was back in 1993 on a Super Nintendo with my flatmate of the time, so there is a chance that many of you will be unfamiliar with the concept of the game or even what Sanuk are trying to achieve.

The premise is simple, you have to tackle five different worlds each containing six different levels, with a tricky boss to overcome on the final level of each world. You do this by planting bombs within the randomly generated grid based arena. The aim is to eliminate all of the enemies within the stage before you can move on. You can collect power ups that will increase the number of bombs you have or the length of the explosion. There are power ups that will allow you to throw and kick the bombs and others that will penalise you and reduce your abilities as well. The levels are more about a puzzle than a direct action and reaction type game. Your own bombs have the ability to kill you for one, and while the enemies on the first couple of stages of world one are straight-forward, easy kills, once you get slightly further in the AI of the various creatures ramp up, so a simple bomb and run tactic doesn’t work. 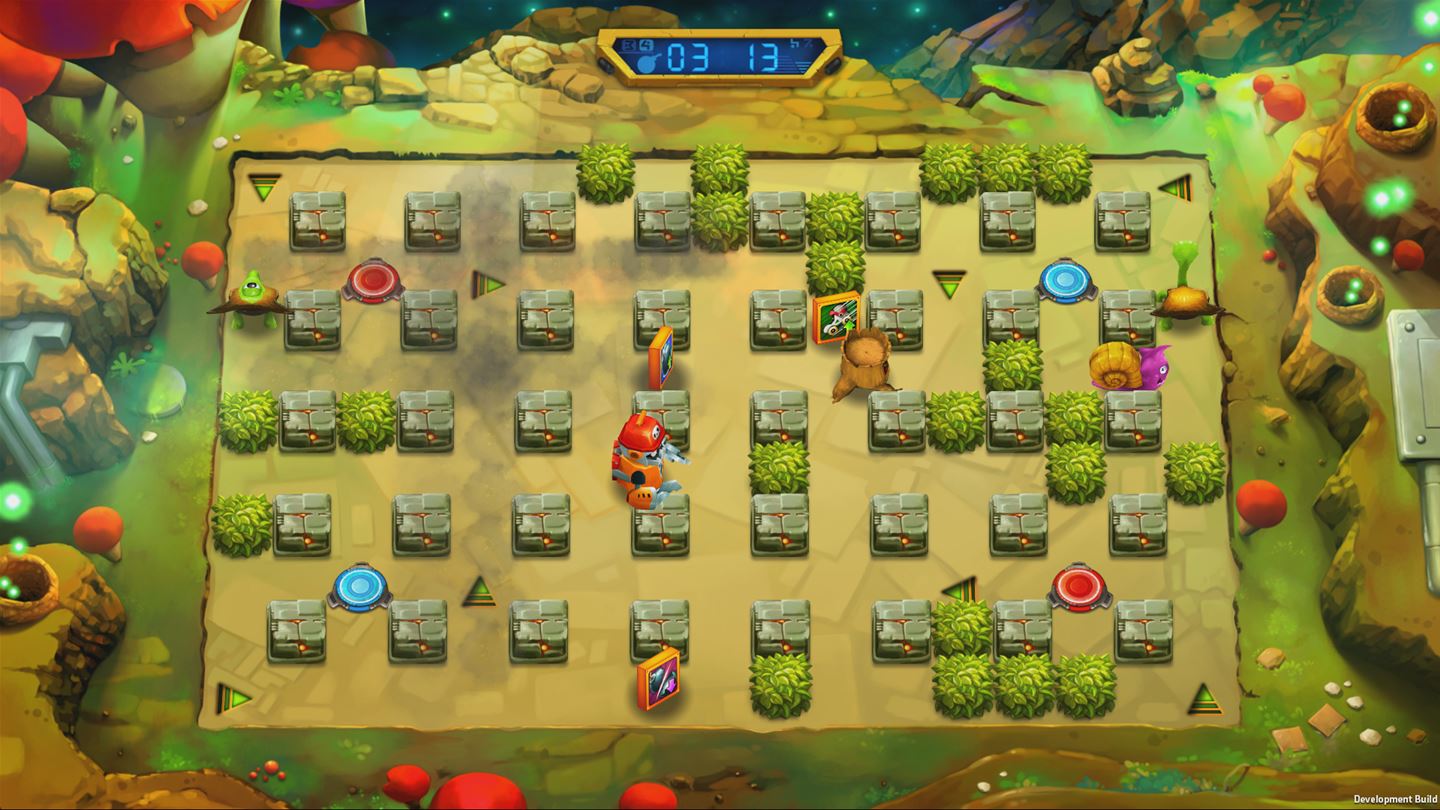 You’ll need to trap them and trick them into making mistakes while avoiding them and your own bombs. The random nature of the levels means that every play through is different and expecting to blast through the first couple of worlds unscathed is something that takes a large amount of skill to say the least. You don’t get energy or even lives on a stage, if you get killed you are starting the level again, regardless of how far you got and who was left to destroy. Bombing Busters gets very close to being a rage quit game, as while the controls are easy to pick up, your character sometimes lacks the preciseness in movement and even feels to floaty, which is of little use in a game that demands such precision.

The graphics would look at home on a last generation machine, though that is maybe being overly harsh, since the original bomberman didn’t rely on graphics for it to shine. Though maybe fully embracing the cartoon type roots of Bomberman would have suited it better. Sitting at the bottom of the screen making helpful comments is Dr Wallow, who is there to provide some comic relief if poor jokes are your bag. They certainly weren’t mine.

The sound design is tinny and annoying and that is being generous, as it continues the lack of originality by leaning heavily on the use of classical music to get around any creativity. Tied in with the annoying phrases your robot shouts when it puts down a minion, you are probably better keeping the volume down low and putting on your favourite tunes instead. 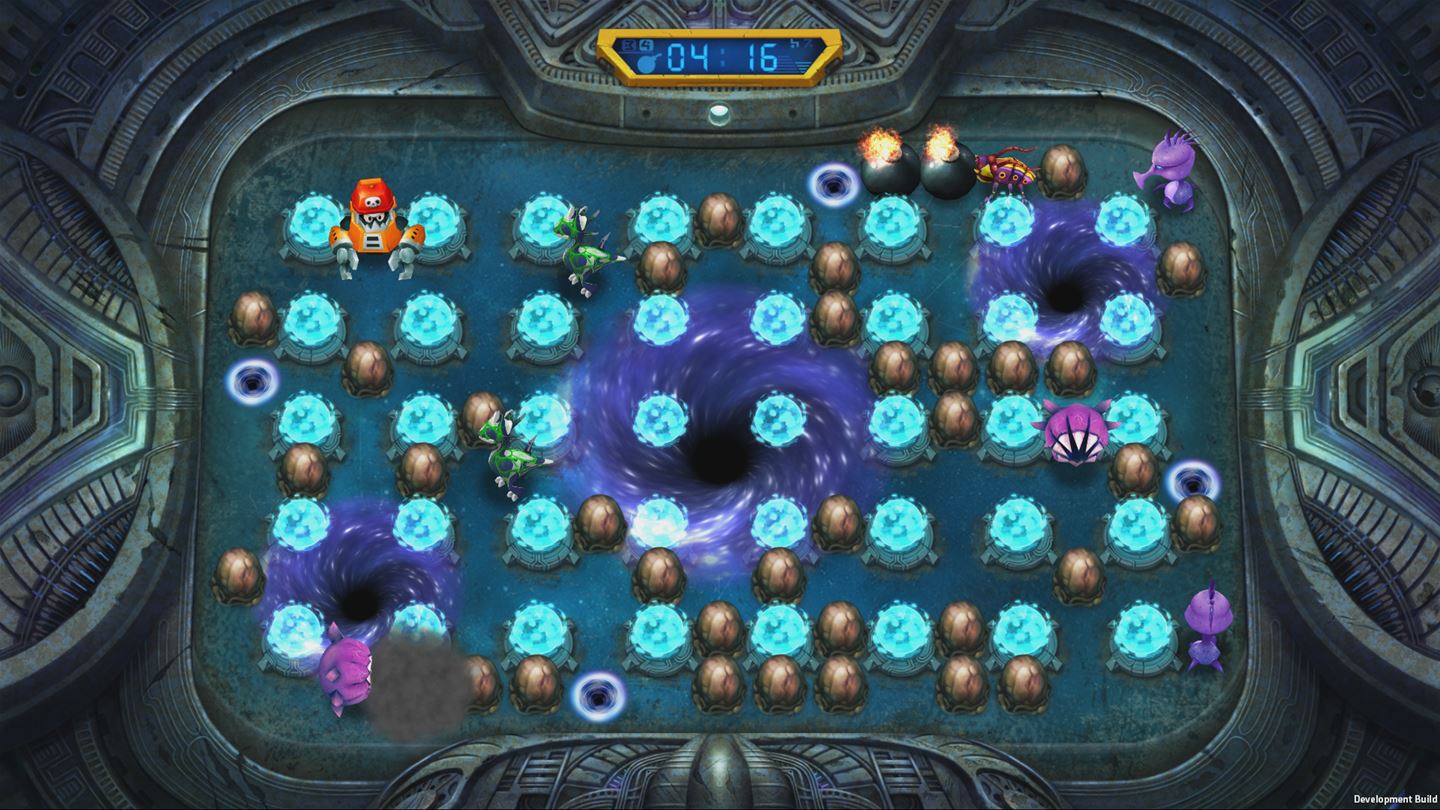 Where Bombing Busters is at it’s most laziest is the implementation of multiplayer. While local multiplayer is an easy win and much fun to be had, providing you can find enough people in the house willing to play with you. Bomberman excelled in multiplayer, and if there was one thing that could gloss over all of the shortcomings of this clone then it would have been an online multiplayer that blew your socks off.

Bombing Busters implementation of online play is reliant on an antiquated system of providing IP addresses and it fails at the first hurdle. I’ve been playing online games since the day of the Xbox and I’ve never had to deal with such a terrible system just to try to play with someone else online. It put the final nail in the coffin for me. There are some genuine moments of fun but very quickly you see too many areas where a bit of polish could have made such a difference and with the potential for what the multiplayer could have been, this is rather shoddy indeed. A bit of a damp squib.