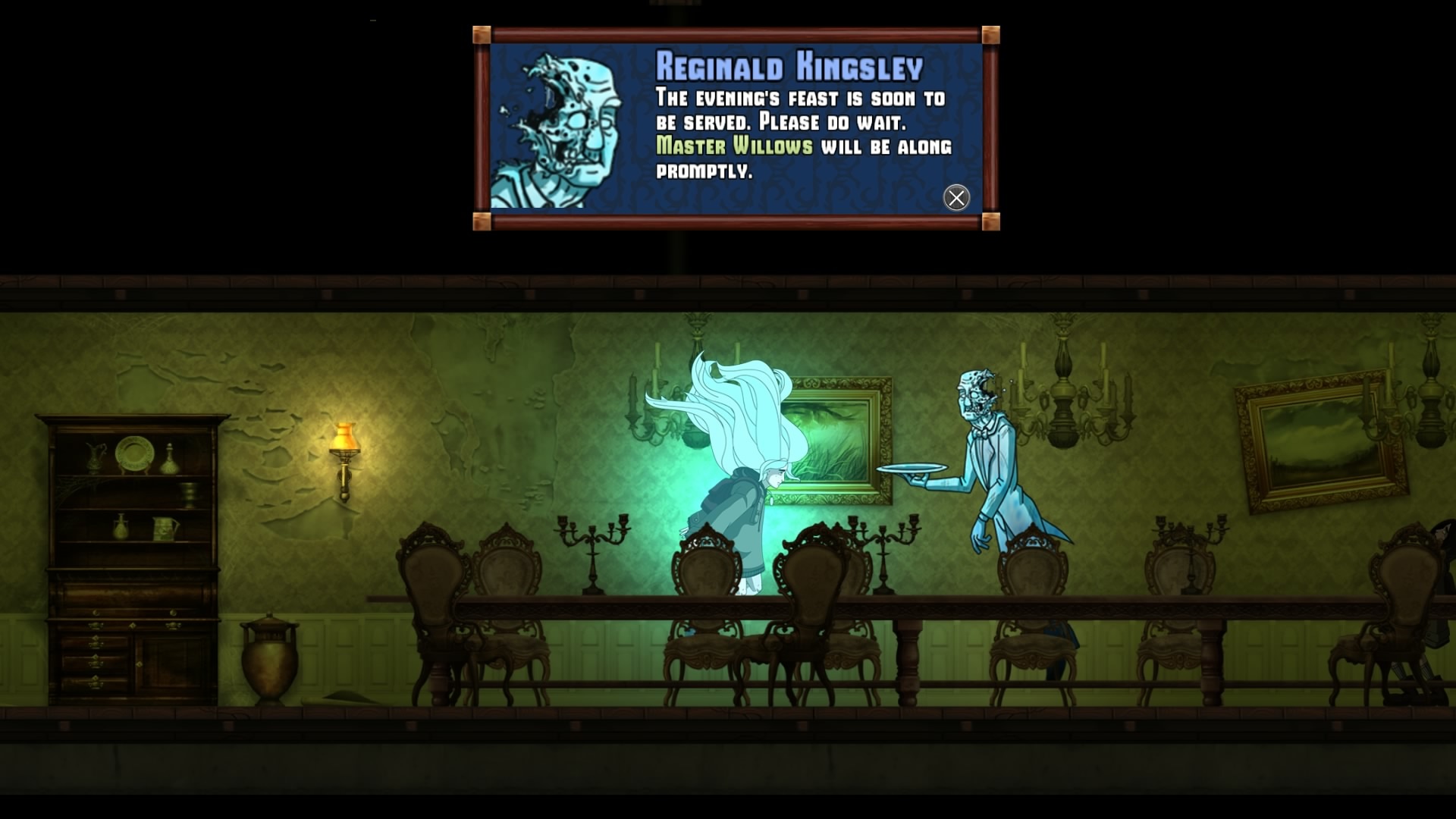 There is a certain air of sadness as you traverse the world that Whispering Willows lays out before you. The horror you are subjected to in this ghostly tale isn’t one of blood and gore and there aren’t the scripted jump scares you’ll see in other games, but a history lesson about Native Americans and how they were treated by the first settlers into America.

You assume the role of Elena Elkhorn, the descendent of the Native American Kwantako tribe who is on a quest to find her missing caretaker father. After heading up to the mansion built by Wortham Willows, you end up searching the dilapidated building and grounds, trying to find clues to your father disappearance, while at the same time, trying to assist Flying Hawk, a spirit looking for his body so he can rest in peace.

What you end up with is an adventure of exploration where you are treated to some simple puzzles and note collection that expands on the backstory of the mansion and its owner, with Elena using the power to leave her body to solve some of the puzzles by either activating switches or funneling herself down small gaps. Her spiritual form allows her to interact with many of the eternal residents in order to unlock further quests, and reach areas she couldn’t reach in her normal form. 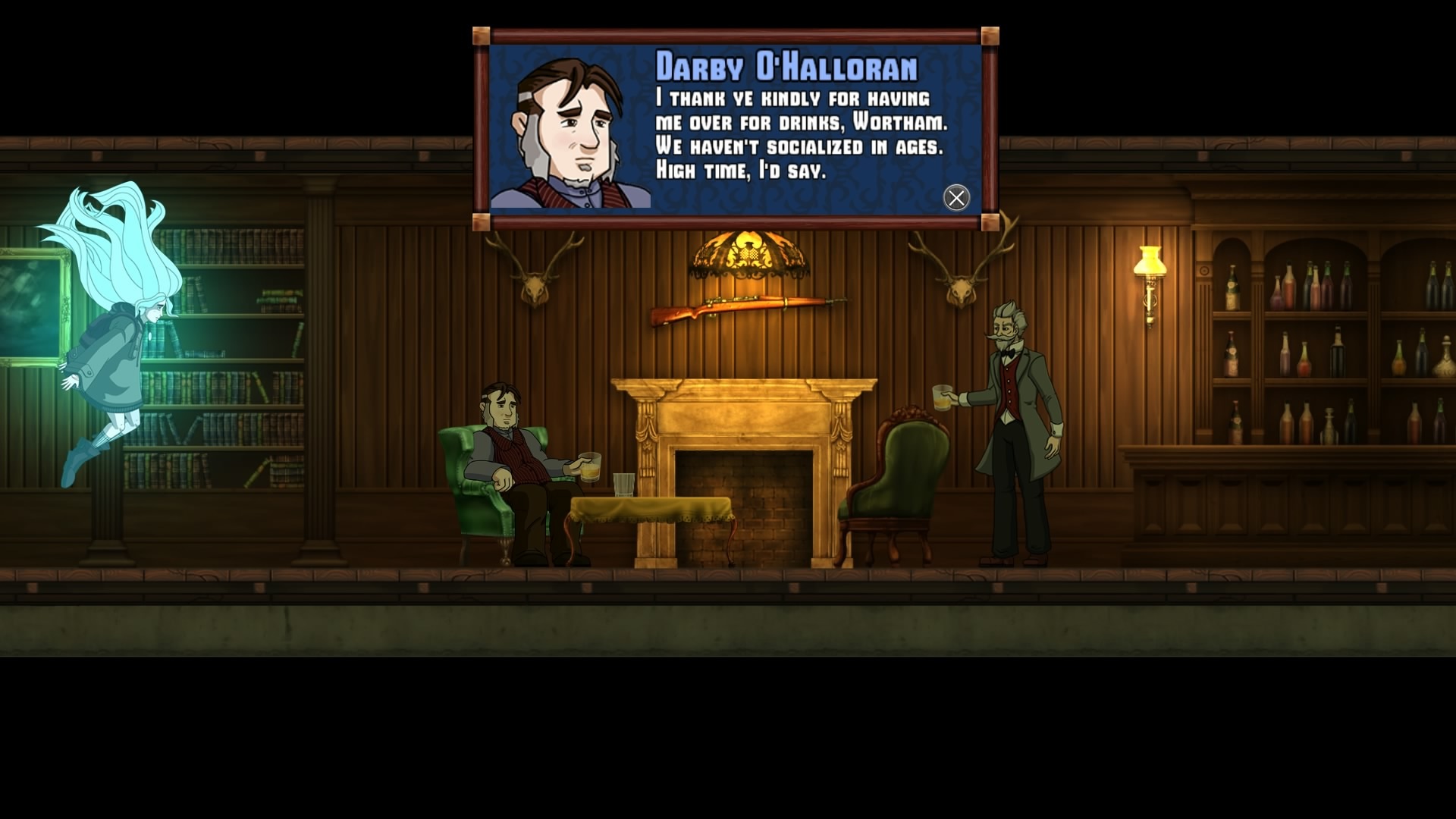 The graphics are in a hand drawn cartoon style, with Elena looking more like a darker Disney animation as she traverses the mansion to seek out the clues, the background palette is sombre, almost sharing in the mourning of its spectral residents, which provides an ideal contrast to the electric pale blue that Elena emits in her ghost form. The cartoon style also helps to makes sure you concentrate on the stories of the spirits over some of the terrible injuries a lot of them seem to have. It would have been easy to go down the gore route, but the uneasiness comes more from the tragic tales that are told than having human claret thrown around the game and it is something that should be applauded. You also take up a fair amount of the screen space compared to other side-on games I’ve played, where the focus is normally on smaller characters and showing more of the level. It leads to a larger sense of oppression and claustrophobia,  as you are limited on what you can see around you.

On the opposite side of the coin it also means it can be easier to lose your bearings in the game and at some points you’ll backtrack only to realise you’ve missed the door you should have gone through.

One of the surprising weaknesses of Whispering Willows is the fact it is so story focused. You will spend a lot of your time on simple fetch quests or moving boxes to clear a path, or traversing down a small tunnel in your ghost form. You never really feel your mind being stretched or challenged and even though there are enemies later on in the game, again you never really feel in any really danger, or slightly stressed. You know than the object here is to progress the story and at some points the gamer and experienced click and point adventurer in me was screaming out for something just a little bit more. 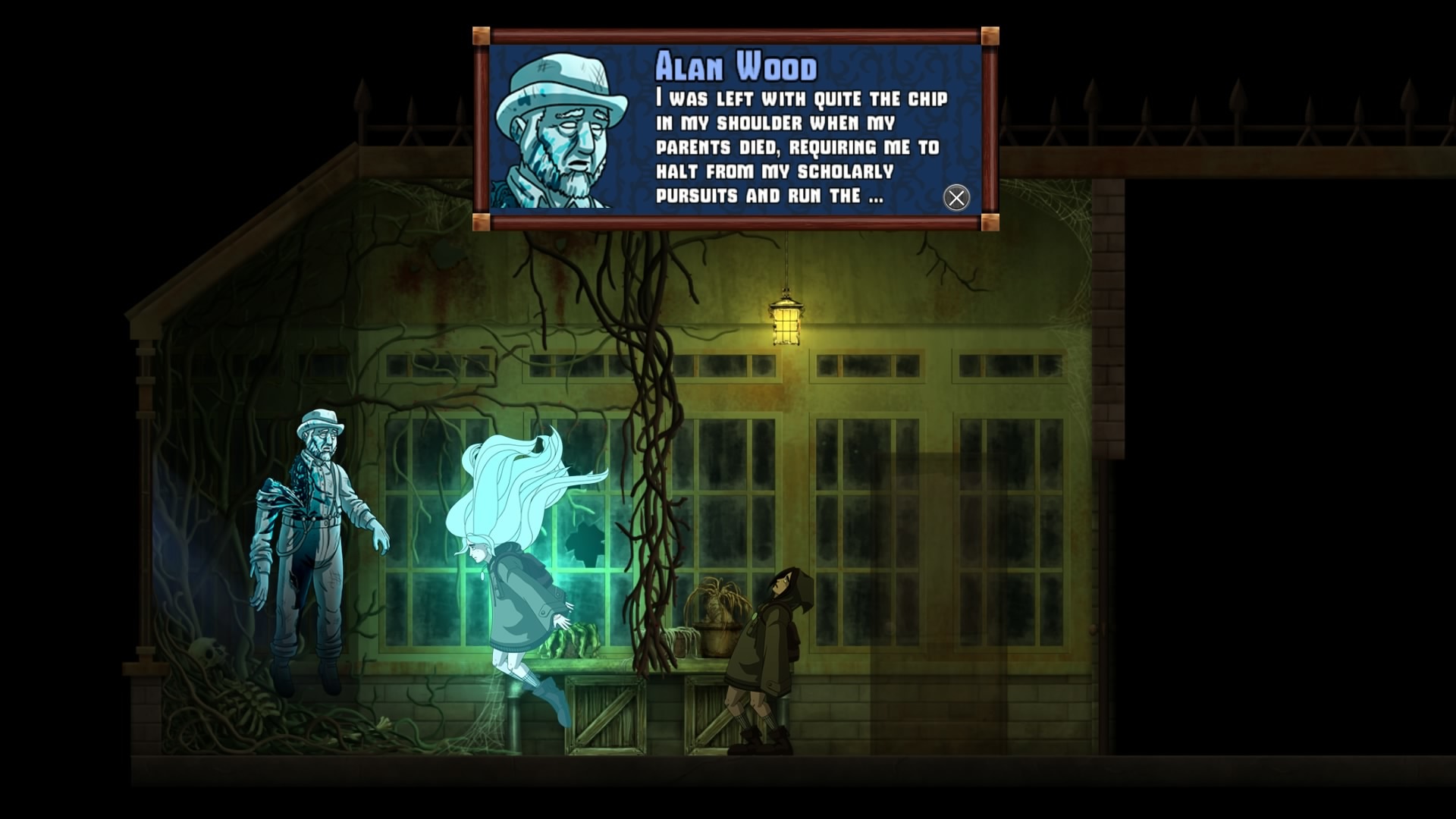 This can be overlooked because the overall aim is to tell a story, to educate you on what people went through during the days of colonisation and to entertain you without the tension you might feel in other games that are pushing for the straight horror angle.

Whispering Willows would suit anyone w ho is looking for a game they can simply sit down and play and relax, who is maybe looking for something different that tells a great story and allows them to really get involved with some very well written characters. For those looking for a bigger challenge, with the traditional jumps and blood and shocks, there are other games out there you should probably consider over Whispering Willows.