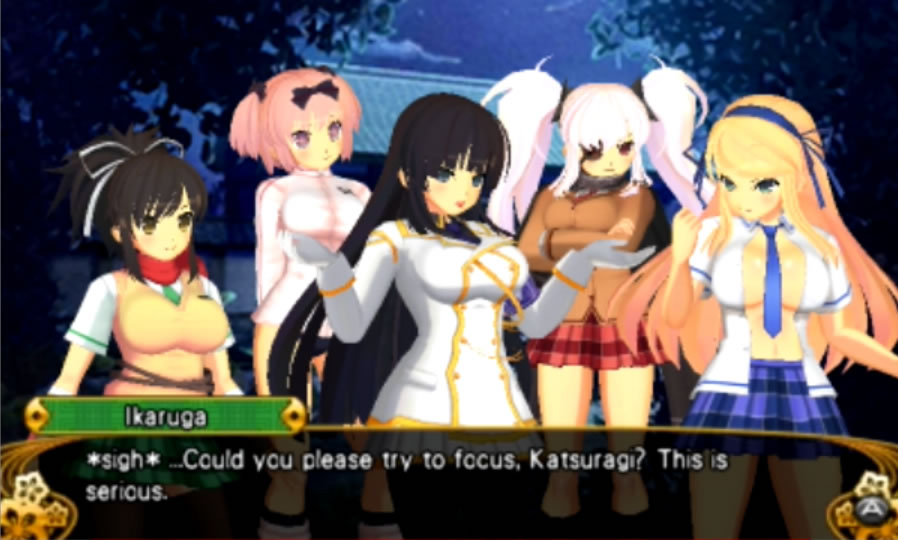 ‘Senran Kagura 2: Deep Crimson’ is a fun, ninja action title released today in the UK. The story is based on a Japanese manga and contains a lot of oriental influences within the style of animation, story line and general decor throughout the game.

You play the game from the perspectives of a variety of busty ninja maidens. The main story mode consists of several small battles that last around 3 to 4 minutes each, with the playable characters rotating on a regular basis to move the story along. I actually really enjoyed this aspect as all the different characters have different moves and abilities so it keeps the game fresh as you progress.

As well as being a pretty solid ‘hack and slash’ there are also some mild pornographic undertones. All the characters have disproportionally large breasts (well, compared to average in any case), some of the most ground breaking jiggle physics I’ve ever seen, the ability to rip off your opponents clothing during battles (reaching as far as swimwear), gratuitous close ups during the battles and the ability to admire 3D models of the characters. In ordinary circumstances I would have been over the moon about all of these features as I love games like ‘Dead or Alive’, ‘Lollipop Chainsaw’ and ‘Bayonetta’. I basically get a buzz out of anything that gets under the skin of the ‘everything is sexist, everything is racist, everything is homophobic, ban everything’ brigade. However unfortunately there is one distinct and important factor that ruins this entire experience for me and actually makes the game extremely uncomfortable to play, but more on that later.

Between the outrageous premise and I’m guessing a very dodgy translation from Japanese to English I spent the first 10 minutes of the game laughing in hysterics. As the opening story unfolded in Japanese I was treated to some absolute gems in the subtitles including…
“You’re tardy! Come over here and I’ll rub in your punishment”
“The one with the pervy hands is another third-year, Kat”
“Point me towards their boobs! My hands are ready!”
“Right, hold still and I’ll smooth over the rough spots. Starting with those two.”
I was laughing! I was crying! I couldn’t wait to show all my friends what the hell I was playing. The opening cinematic was awash with huge bulging breasts, outrageous jiggle physics, crotch shots. This game was beautiful in its lunacy. 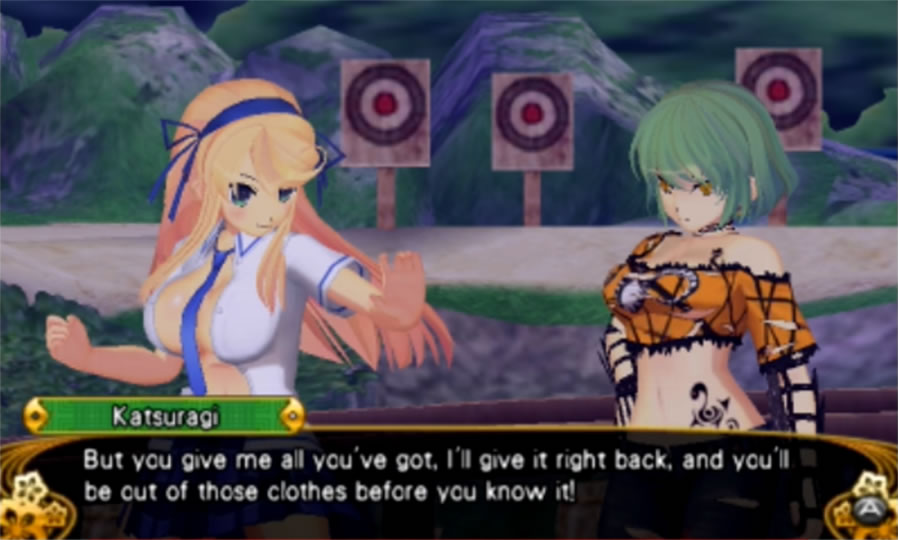 The game is split into five main chapters which have to be completed in order, however you can back track to earlier fights at any time to gain more experience points and strengthen up the various characters (of which there are 10 playable). There are usually quite long cut scenes between these chapters which are referred to as ‘novels’ in the menu. If you want to skip them or watch them again later you have the options of doing both. The plot is pretty poor. Maybe it’s due to the translation but the dialogue reads like it was written by a small child. I gave up on it after about 20 minutes as some of it was pretty cringe inducing. This didn’t really bother me in the long run as aside from the story the game itself is pretty solid.

Each stage usually begins with a hoard of minor enemies to defeat which do not pose too much of a threat. These stages are usually the easier ones as beating smaller enemies gives you the opportunity to build up some experience and store some special moves. The stage will then end with you battling a more significant character or a boss. Some stages will have you fighting a boss straight away in a simple one on one fight. In these cases you will need to strike the boss a good few times before you’re able to pull off any special moves.

Each character has two sets of moves. One can be pulled off on the ground while the other is specifically for mid air combat. By attacking you opponent with projectiles it’s possible to take gain enough lift to take the battle from the ground to the air. This is great while fighting large groups of enemies as you can take more manageable chunks of the battle to the sky, giving you some reprieve from the mob on the ground.

While fighting tougher opponents there is one factor that I found to be really important and that is momentum. Similar to playing wrestling games it is important to stay on top of the battle. You need to get into a rhythm, mixing up different moves and using a range of techniques until your opponent is floored or dizzy. You can then take advantage and inflict as much damage as you can while your opponent is down. While on the receiving end of the punishment I find that a simple jump is a great way to break your opponent’s chain of attacks and may just be enough for you to sneak an attack in to turn the tables.

There are no options to rebind the controls however I did find the defaults to be very comfortable. ‘B’ jumps, ‘Y’ performs a light attack, ‘X’ performs a heavier attack, ‘A’ fires projectiles, ‘L’ performs a special move (of which you can store up to three) and ‘R’ locks onto particular enemies. As the game progresses you begin to enter stages where you play as a two person team. These stages do not have projectiles to fire as ‘A’ will switch control between the two characters. Thinking about it assigning this switch to the D pad would have made more sense.

The graphics are pretty good all in all. Since the game is created in the style of Japanese animation the visuals are presented in a crisp and clean cartoon fashion, with lots of flashy explosions appearing while the attacks are taking place. Since the camera is usually quite close to the action and it’s a pretty fast game I didn’t find it too comfortable to play with the 3D turned on. It was all a bit migraine educing. However with the 3D turned off the game looked pretty good overall.

A lot of effort went into the sound in this game. There are over 50 pieces of up tempo music and as a bonus you can unlock these tracks in a sound test menu as you complete the stages. In addition, all the cut scenes are fully voice acted. Unfortunately for western audiences all of the voice acting is Japanese, however given the hilarious subtitles I can happily live with that.

In addition to the main game a lot of effort has gone into the extra content.
* There are up to three save profiles available
* Additional non-story missions
* You can play online with a friend
* You can access a library of media including pictures, cut scenes and music
* Plus there is a dressing room where you can dress up your favourite characters in a large variety of unlockable clothing.

Overall this game is pretty stable and I didn’t notice any major technical issues while playing. I did find on occasion that I was able to move my character around the terrain while it was in a dizzy state but it was nothing game breaking. 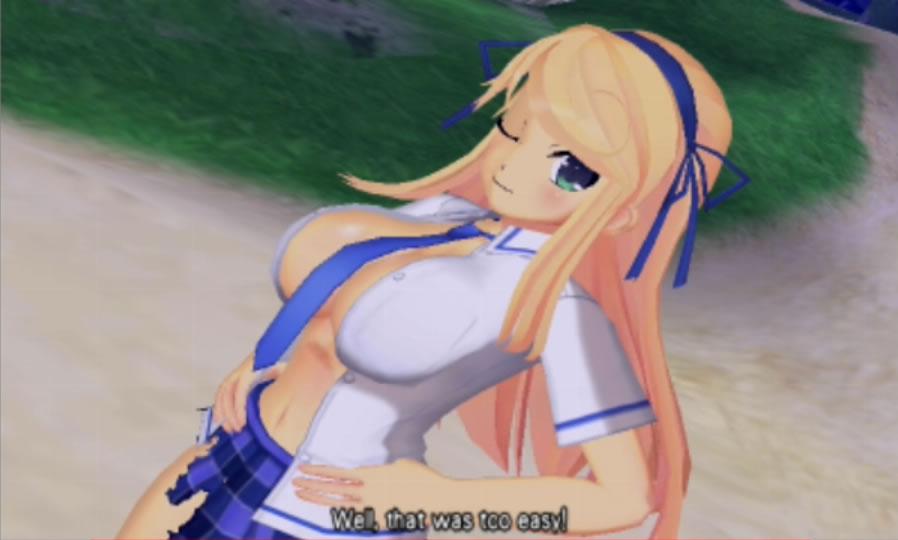 In summary this is a hilarious game about big busty ninjas that looks pretty good, sounds great, plays well and is a lot of fun, so what’s the problem with it? Unfortunately there is one problem that I had with this game which overall ruined the experience for me. It’s kind of a cultural issue and I hope no one thinks I’m being dismissive or prudish, but it is the reason that I can’t really endorse this game.

As I was reaching the end of the first level I noticed something which made me feel a bit uncomfortable. Maybe it was because of the voice acting or maybe it was because I was paying closer attention to the characters while in play, but it suddenly dawned on me that the girls in this game all look frightfully young. Bear in mind that this is a game that keeps zooming in on the character’s breasts, crotches and buttocks. I decided to do a Google search and to my horror discovered the profiles of these characters from the original manga. The ages of these girls ranged from 18 being the oldest, all the way down to as young as 15. Apparently the legal age of consent in Japan is 13 (actually to be more specific it varies from region to region but can be as low as 13) so to eastern audiences I’m guessing this wouldn’t be seen as taboo.

According to a user on a Gaming FAQ forum I discovered that a previous game in this series was given the ‘all clear’ in western countries by omitting the girls ages from their profiles. I guess as these girls are fictional cartoon characters their ages could be a matter of interpretation if they’re not specifically mentioned anywhere, however I personally wasn’t satisfied by this solution. Unlike ‘Dead or Alive’ or ‘Lollipop Chainsaw’ the over the top sexualised imagery was no longer simply eye candy to accompany a pretty decent action game, but something which made me feel extremely uncomfortable.

If the characters were of a more suitable age for this style of game I’d have no problem recommending it to friends, however as it stands I personally feel that this game isn’t really suitable for western audiences. Please note that score I give this game is solely based on its merits as a playable game, and as such disregards my stance on the characters.