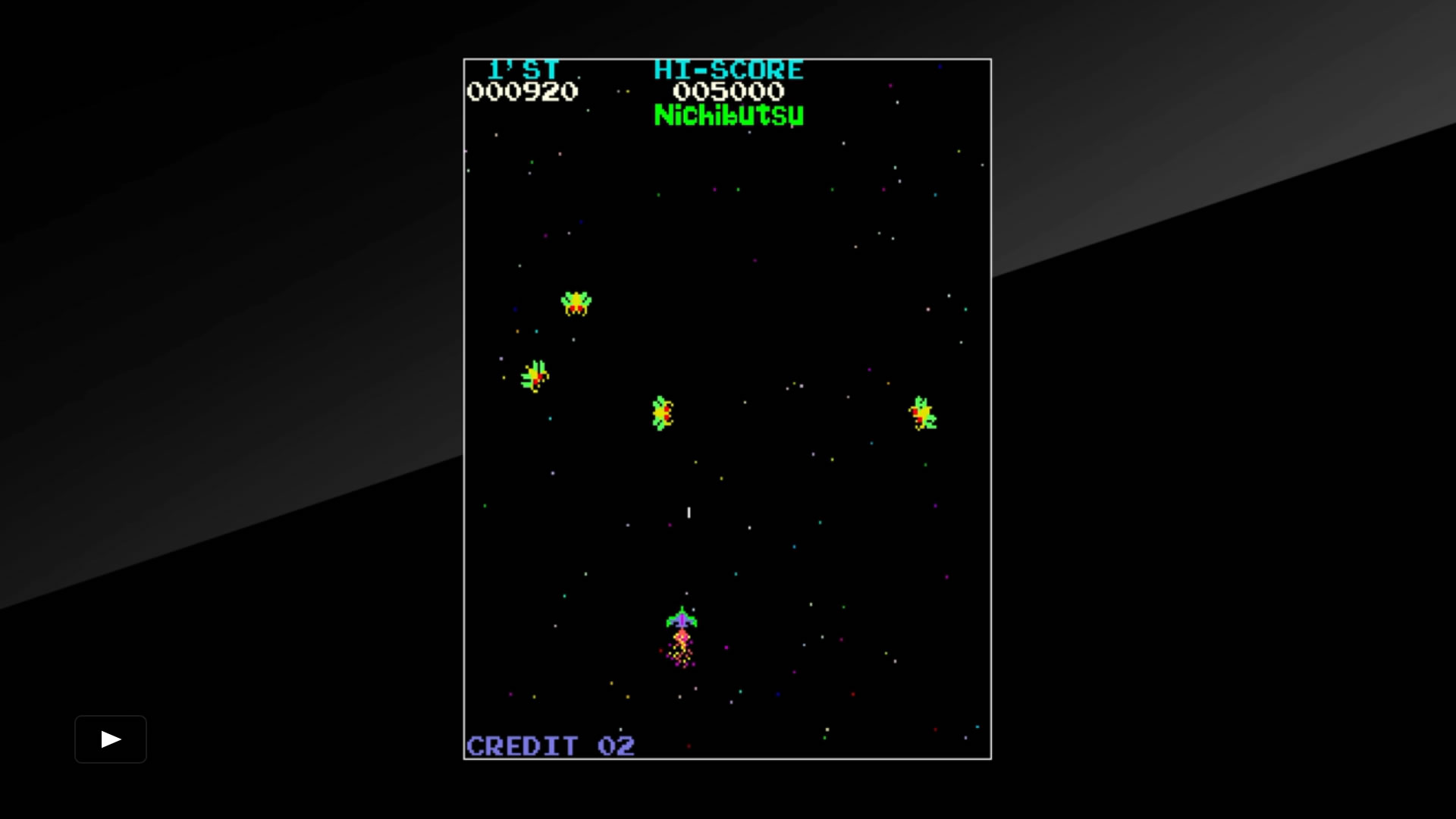 Many of Hamster’s, Arcade Archives releases are relatively obscure meaning that, outside of those with fond memories of the original releases, the games themselves have to hold up by today’s standards if they are to make any major impact on their new platform. While many do thanks to the simplistic purity of their arcade-style design, some of the oldest games in the collection feel just that – old.

Moon Cresta is one of these decidedly ‘old’ titles. Released way back in 1980, Nichibutsu’s vertically scrolling (ish) shooter is unquestionably a game of its time with simplistic visuals, garish primary colours and, well, let’s be honest, a rather horrifying soundtrack. The squeeks and buzzes that accompany the action certainly have an initial charm, but after a few minutes of gameplay, it all begins to grate. As always, nostalgia will inevitably extend your tolerance, but unlike the simplistic joy of 8-bit chiptune style music, this older brand of incredibly basic bleeps and blops inevitably lacks the charm of its more musically advanced successors.

Still, you can always turn down the volume, and besides, gameplay is king, and it’s here where Arcade Archives Moon Cresta is at its strongest. Falling somewhere between Space Invaders and Xevious, Moon Cresta implies a scrolling background via the movement of its multi-coloured stars, but in reality, actually plays out a lot more like the fixed screen combat found in Space Invaders. The ship moves left and right on a single plane with only one attack button to take on the oncoming hordes of alien attackers. Attacks are initially via a single, and rather slow loading laser which feels horribly underpowered given the situation at hand, thus making this an immediately challenging shooter. 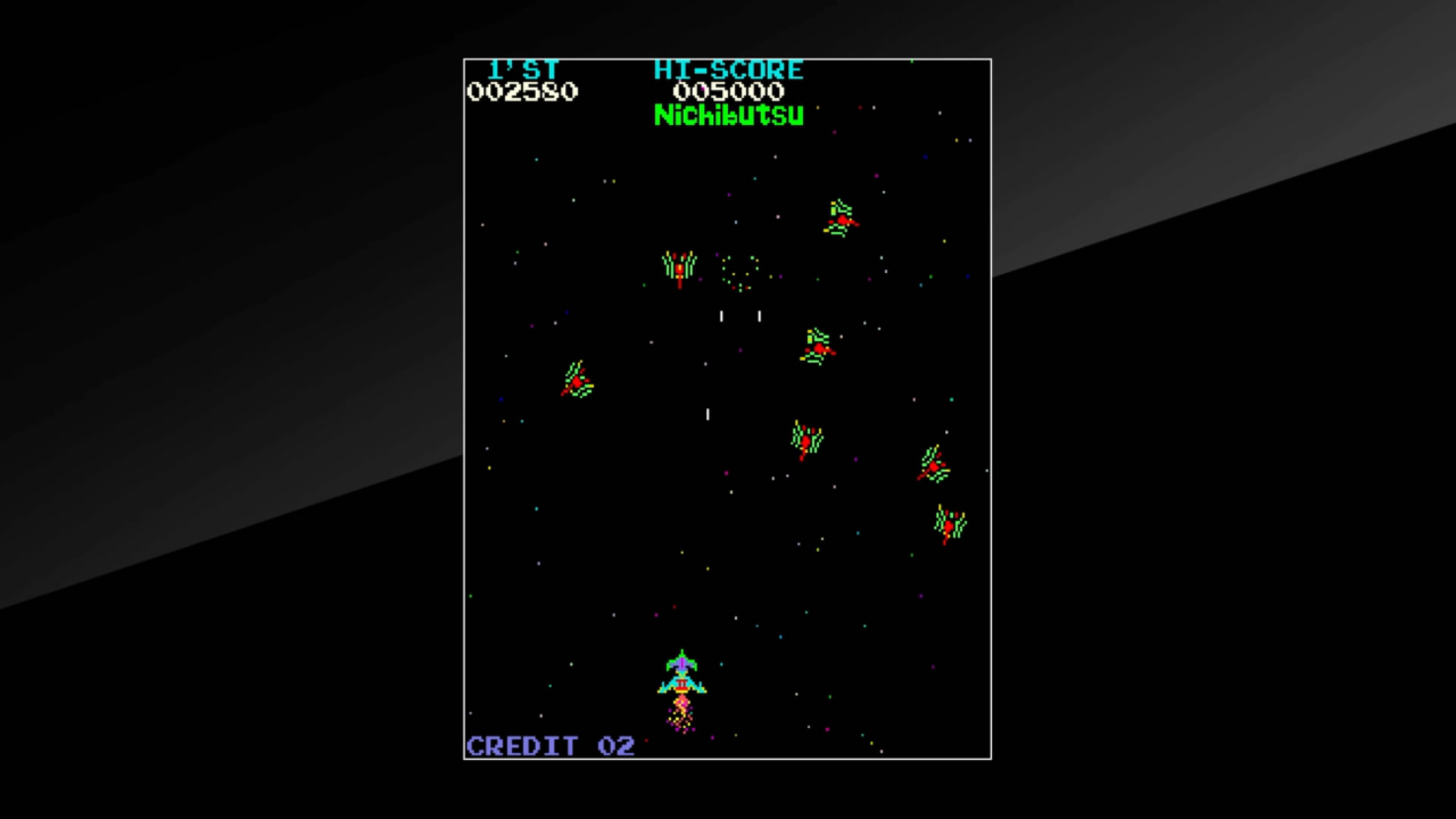 The reason for this is the games’ incredibly fast-moving enemies. Not only do they move in and out of your on-screen view, but they also jitter wildly back and forth in incredibly hard to read formations and move patterns. Aesthetically, they might not be the most interesting bunch you’ll ever come across, but in terms of offering a challenge, these fidgety little buggers offer little in the way of respite.

Luckily, while initially underpowered, Moon Cresta’s somewhat unique calling card allows you to dock with two additional parts of your ship. The first comes after the completion of the fourth wave and adds two additional laser attacks while the third is added (as long as you don’t get hit), after the sixth wave, adding another two to your ever-growing arsenal.

That might sound great on paper, but these extra ship parts, while doubling up as the extra lives available to you, subsequently make you a much larger and much more vulnerable target. Don’t get me wrong, the extra firepower is certainly beneficial, but your extra mass makes dodging the increasingly frantic enemy ships all the more challenging. 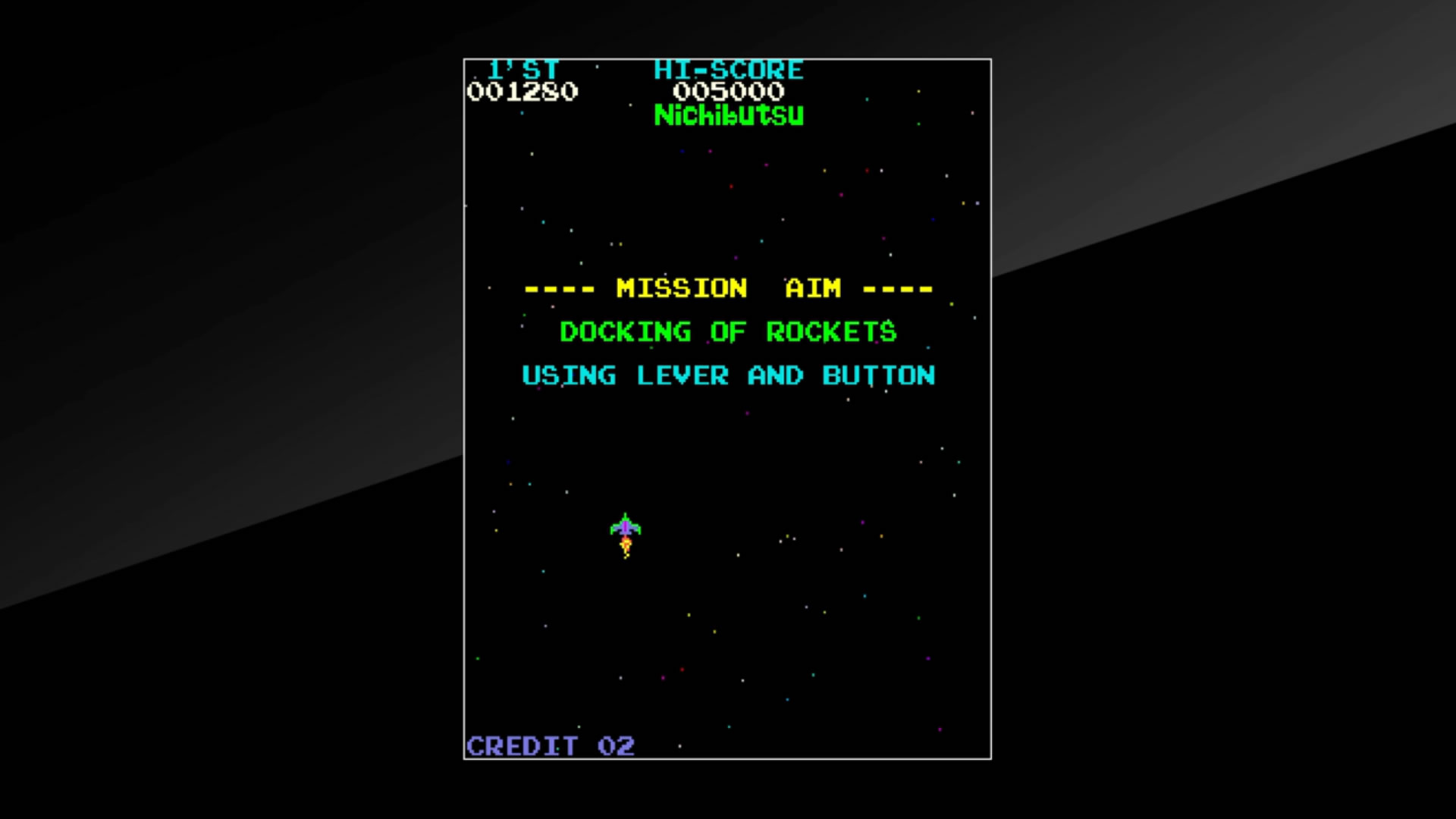 If you do manage to successfully dock both of your ships (it’s not very difficult), and survive without taking any damage (a much more taxing proposition), Moon Cresta essentially resets after the eighth wave with you reverting back to the single ship form ready to be built up again over the subsequent and increasingly taxing waves. As you can imagine, this all means that Moon Cresta, beyond it’s rather addictive gameplay, doesn’t actually have all that much to see – those uninterested in high score chasing are likely to be bored within moments of booting the game up. That’s missing the point though as, simplistic or not, this really is all about high score chasing with the mechanics and challenge both solid enough to make this a worthwhile experience for fans of retro arcade gaming.

Be warned though – this really is ‘retro’ gaming. Arcade Archives Moon Cresta both looks and sounds incredibly old-fashioned with the primary draw proving the purity of its simplistic but surprisingly compelling core mechanics. As always, the package provided by Hamster, while arcade perfect, remains incredibly basic with no additional extras of any kind. This inevitably leaves Moon Cresta as a retro release geared exclusively towards those with a keen interest in retro gaming (or happy memories of the its original release in the arcades over 35 years ago). Moon Cresta remains a fundamentally solid shooter in 2015, but its basic mechanics and incredibly old-fashioned audio/visual design are so rudimentary by today’s standards that only the hardcore need realistically apply.