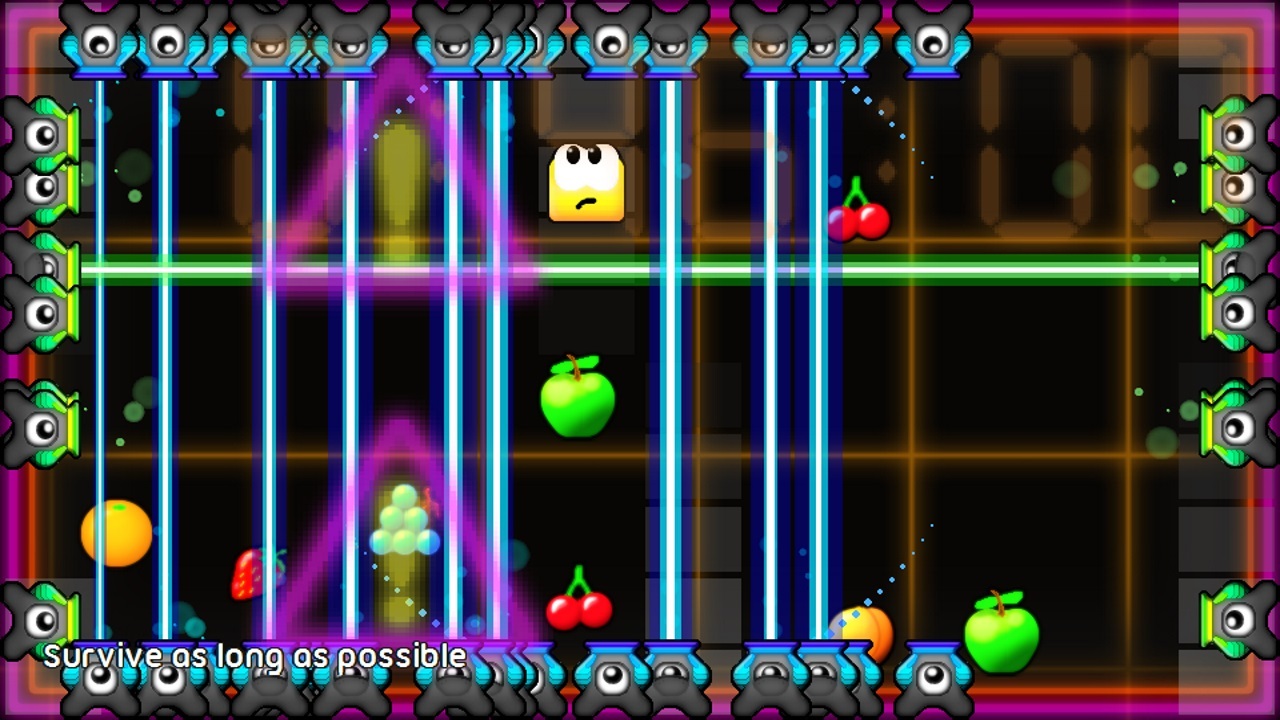 Since the decline of the faithful arcade in the Western world, the art of what was once an addictive, money-spinning attraction has migrated to home gaming market. Coin consuming classics along with a new wave of worthy indie pretenders are now available to play on anything from state-of-the-art consoles to even your mobile phone. The PlayStation Vita is still a haven for these high score challenges. Developed by Infinite State Games, Don’t Die, Mr. Robot! is a fast paced arcade action game that may not be much to look at on the surface but has an enough of a hook to keep you frighteningly obsessed and glued to your handheld.

If the name hasn’t already given away, the objective in the game is to keep the title character alive for as long as possible. Using either analogue stick, you must guide Mr Robot around the screen for as long as possible, all while avoiding the constant stream of spawning enemies that fly, bounce, chomp and shoot their way across the arena. Throw in a number of different challenges, goals and modes of varying difficulty, and what you get is a surprisingly meaty arcade game that keeps you guessing from one level to the next.

Of course, there’s more to this survivalist tale than simply wiggling the joystick around. First and foremost, there is a points element in play as well. While there’s records to me made by avoiding enemies for as long as you can, you can also rack up extra points by dispatching your foes by using pieces of fruit that randomly appear across the screen. Touching an apple banana or bunch of grapes will send a shockwave out around its location and take out any enemies in the vicinity. If you have multiple fruits in the area, that will create a combo, multiplayer your score further. You can also become a bit of a daredevil and skim gently across an enemy for more bonus points but one false move and you’ll end the round. 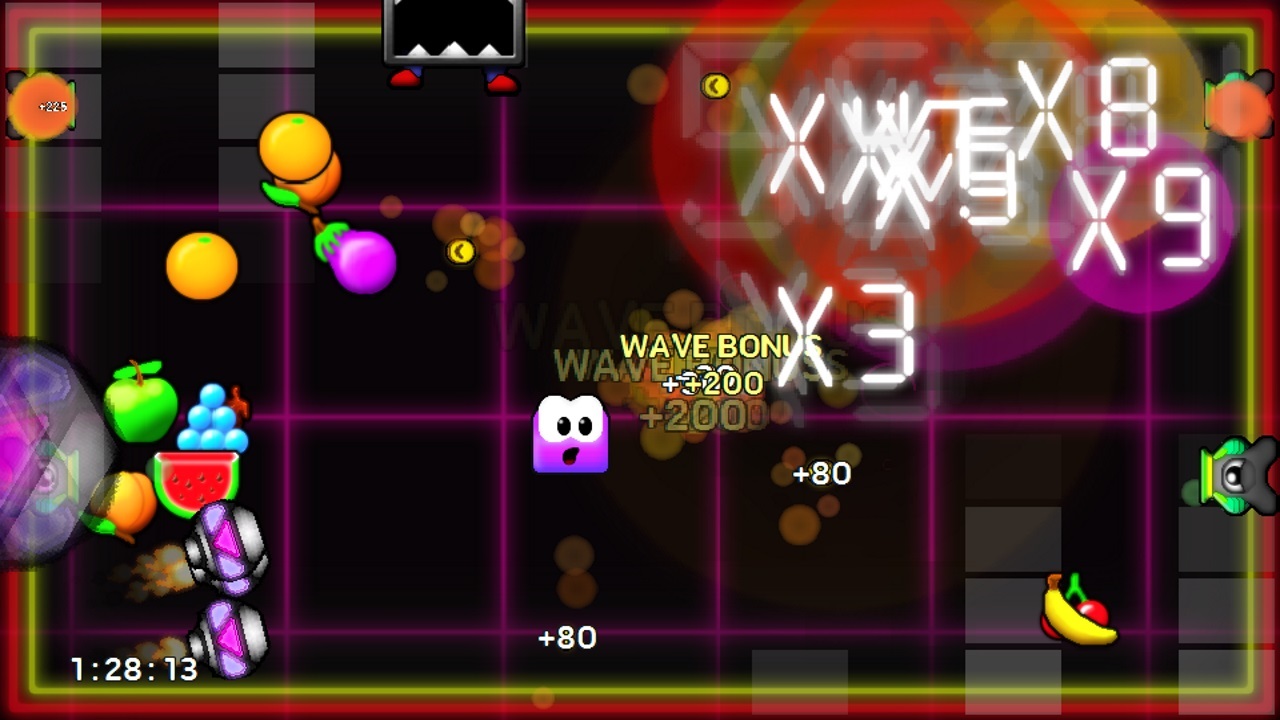 Remix mode is your entry into the game and is definitely the most appealing of the options on offer. Consisting of ten arenas, you’ll have to compete in a series of challenges in order to unlock each one. The first five challenges are pretty straight forward and take you through the basics, but as you open up the next arena, these objectives will become increasingly more difficult. Due to the short and sweet nature of each challenge, it’s a game that gets you hooked for short bursts at a time and you’ll wind up plowing through levels for more time than you’d imagine.

On top of this, an award is granted upon the completion of a level and depending on how long you’ve survived, how many points you’ve obtained or how many enemies you’ve destroyed, you’ll receive either a bronze, silver, gold or platinum trophy for your efforts. It’s the perfect reason to return to completed challenges, especially if you want to achieve all the platinum trophies or better your personal best score. Killing enemies will also award you with coins which can be used to customise Mr Robot and even unlock upgrades that, while are ineffective during remix mode, can be used in the other modes on offer.

Arcade mode consists of a never-ending version of the game where you are free to rack up as many points as you like for as long as you can survive. As you go on the range and amount of enemies will increase, getting to the point where you’ll eventually be stuck in between different waves, hoping that eventually a fruit will appear to save your skin. Conversely, Time Attack mode gives you limited time to fulfill your objectives and while two and a half minutes may not sound like a long time, the action ramps up pretty fast. Finally, there’s Chill Out mode which as the name would dictate, is a much more slow paced version of the game. Enemies will take their time moving across the screen but that doesn’t make things any easier, as at times you’ll have to wait for them to get by you before you can make your escape. Along with remix mode, these other options may not differ a whole lot but there’s still plenty of value to be had. 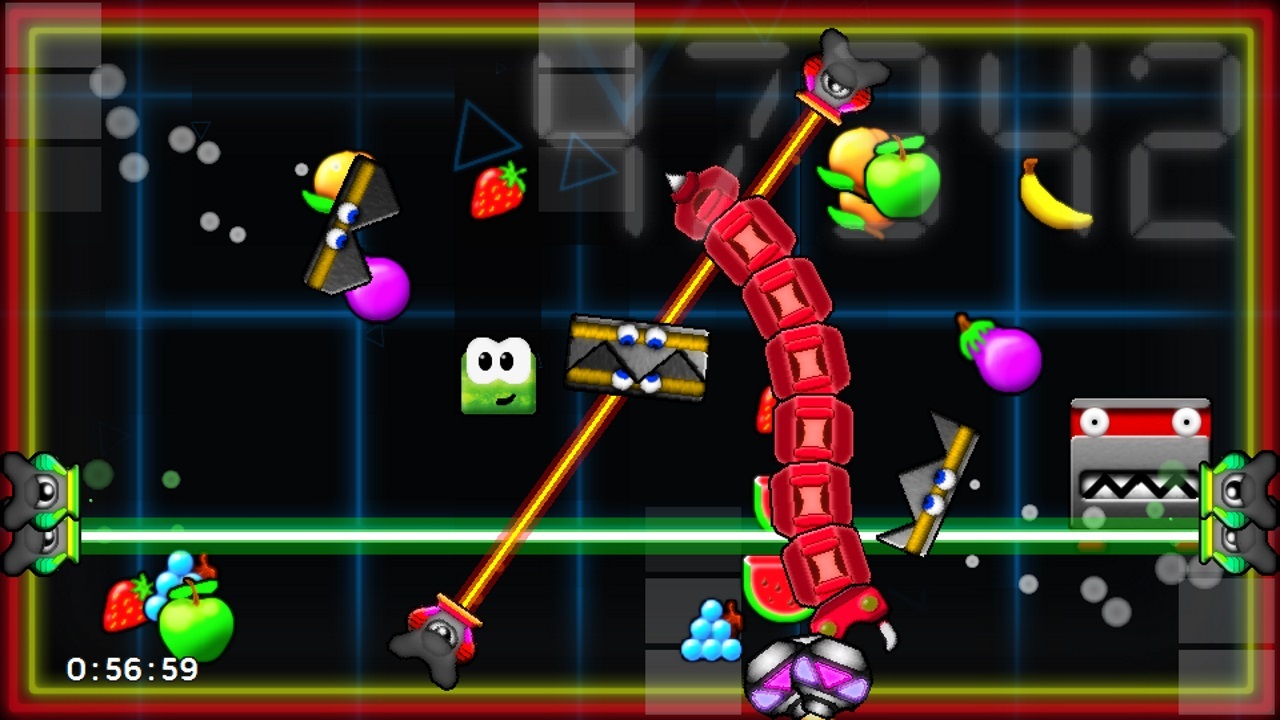 Presentation wise, Don’t Die, Mr. Robot! is very basic but that surprisingly doesn’t take away from the fun. The bass heavy thump of the music spurs you on while the simple level designs are given a retro, luminous sheen that is very much in keeping with the game’s arcade roots. The timer lurks in the background and can at times be distracting, particularly if your objective relies upon it. Enemy designs are varied enough that you’ll work out their movement and attack patterns quickly but scramble when confronted with multiple waves. It keeps the ante up, bringing with it new surprises and a constant need to go back and try again.

Don’t Die, Mr. Robot! is a quick fire arcade game that is surprisingly good fun in small bursts. As the sort of game that can be returned to over and over again, particularly after a long hiatus, it’ll be a welcome mainstay for your PS Vita library for quite some time. The classic aesthetics of the game along with some variety will remind of lost afternoons in the arcade, without gobbling up your loose change at the same time.