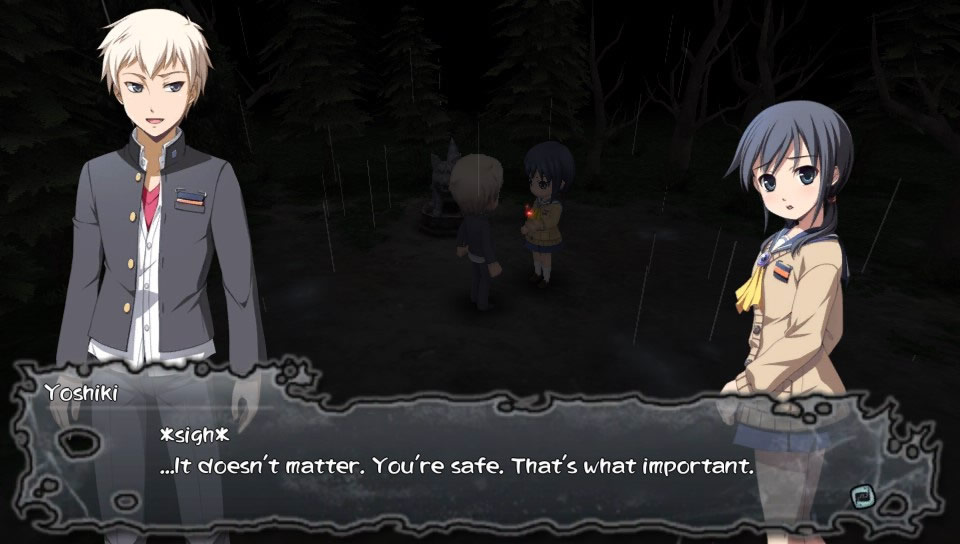 This review will contain minor spoilers for the previous games The PS Vita has been crying out for a go to game for some time with Corpse Party: Blood Drive releasing just before Halloween was it worth blowing the dust of my Vita and playing? Yes, it was.

Corpse Party: Blood Drive is the third and final instalment in the Heavenly host series which started way back in 2011 for the PSP. However this was not originally the origin of the series as it was originally created for RPG maker 95 way back in 1997 and released as a free to play game. It captured the hearts of millions and has even had fan games and an anime based of it. I am a fan of the series myself and I have played all three games, including the 1997 one.

So what makes the series so good and is this game worth playing to see it to its end? Certain things let it down but the story told is definitely gripping enough to finish it. The cast returns from the first game the survivors of Corpse Party repeated fear. The story centres on Ayumi. Who is still desperate to revive her lost classmates who perished in heavenly Host. For those who don’t know what that is, without ruining anything just think of it as a purgatory as such. However if you die there you relive your pain you felt the moment you died for eternity. If that wasn’t bad enough your existence itself is also wiped from people’s memories pictures are tarnished with black circles where the faces once were. So only those who have been there remember them. 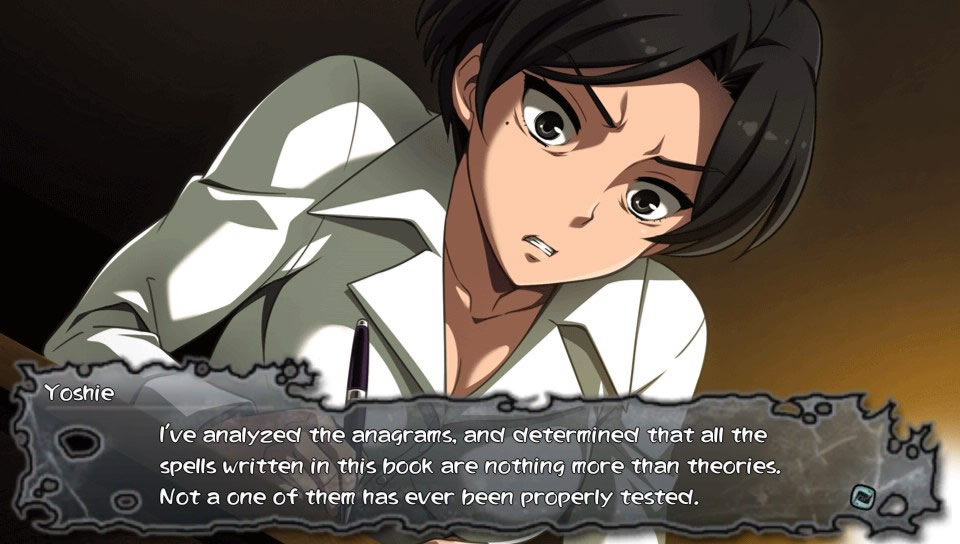 This game all starts when Ayumi hears that the book of shadows is back in Heavenly Host waiting to be retrieved. This book is said to have the power to bring the dead or those who have perished in Heavenly Host back to the real world. Ayumi unselfishly decides not to involve her friends this time (after all it was her that sent them there in the first place) she senses it’s her responsibility to undone what she has done and bring her friends back. I can’t really say anymore without spoilers, there’s a few new characters added to the mix one in particular has an outrageous dress sense.

Corpse Party: Blood Drive has one of the creepiest loading screens I have ever seen what makes it worse is that you will be looking at it, a lot. Unfortunately here’s a major problem with the game, it just feels unfinished. Loading times are a bit of a joke to be fair. It shouldn’t take me 10 seconds (yes I timed it) to quickly go to my menu heal then go back out of my menu, but it does. If you can deal with that as well as the clumsy camera this is a pretty good game. It builds up suspense just like you would expect from any Japanese horror game and the visual novel side of it is done perfectly, part of the thrill and scare factor is you never know what’s around the corner and you always have that uneasy feeling.

Graphics wise Corpse Party has its own cute unique spin on the chibi style. It doesn’t push the Vita’s limits by any means but it looks dark and gloomy and basically just creepy as all hell just as you would expect. When body parts are coming out of the ground and walls that’s when you know you are in messed up territory. Character portraits are really nicely drawn and each expression given does a great job to make you experience how that character is feeling. Some of the sound effects are just sick and I do mean this in a good way. For example, if someone has their head bitten off you hear every crunch and it makes you cringe. Characters voices are not English and I know this is going to put a lot of people off but the Japanese dub is very good. Music does a good job of building atmosphere and dread too. The opening intro video gave me Goosebumps first time I watched it. 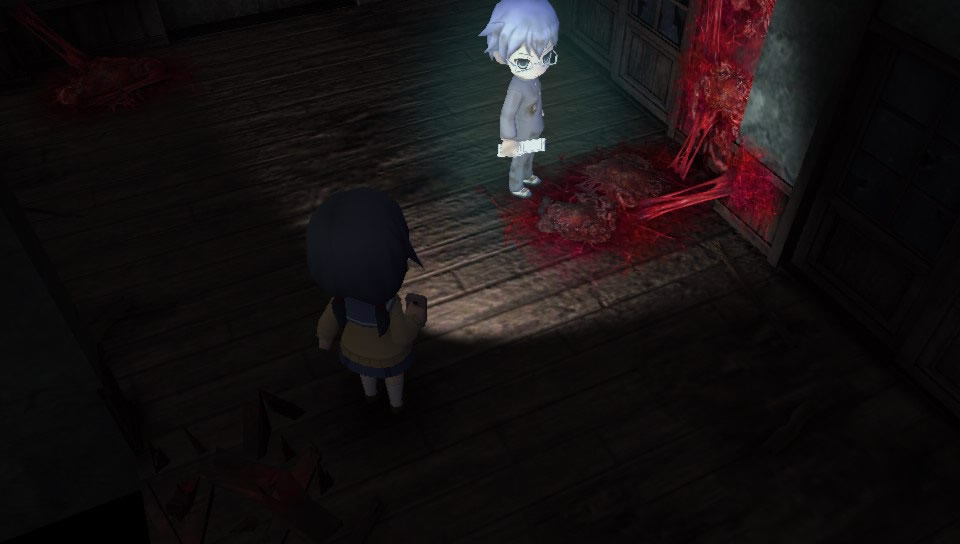 The gameplay mechanics are the traditional horror/rpg mix. You pick up items such as bandages and navigate your way through the school however new stuff has been thrown in you can now hide from enemies and sprint away from them be warned though is extremely limited so you want to use it wisely. Obstacles have also been added, broken glass, broken flooring all do damage and slow you down if somethings chasing you if you take too much damage your screen will begin to turn red telling you if you don’t do something soon you will die. If that wasn’t bad enough you also need to collect batteries for your flashlight. Without it you can’t see anything and they are incredibly scarce.

Very much like the previous game the multiple choice questions are back and as usual picking the wrong one results in an extremely uncomfortable wrong end always either resulting in the character’s death or them losing their sanity. It’s pretty obvious at most times which answer is the right one though so if you’re hoping to see massive multiple endings you’re going to be disappointed.

Overall, Corpse Party: Blood Drive definitely feels more like a survival horror RPG than the first one. Its twisted story and death scenes are something you either love or hate. I found myself enjoying the game right until the end I do not want to ruin the end but it didn’t really deliver all the promise it had. Still this may be the end of the Heavenly host series I am sure Dead patient will at some point refer back to the characters in this one and maybe the questions I still have at the end of the game will be answered in that. I’m sure this isn’t the last we have seen of the cast of characters from this series.