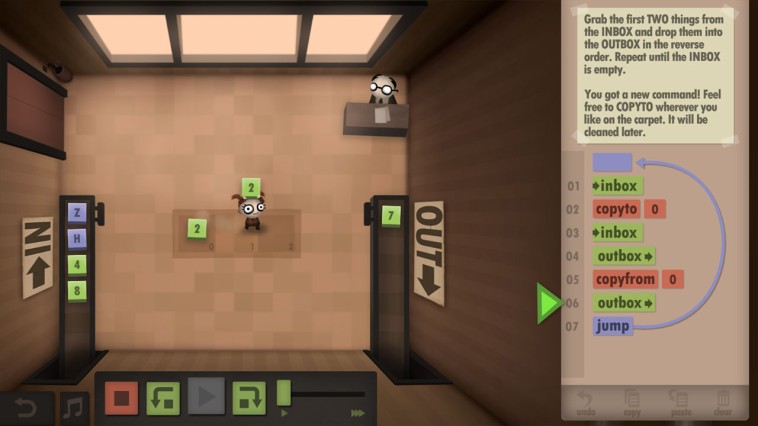 Offices aren’t particularly inspiring settings for video games and when they do feature it’s usually as destroyed urban wreckage for a FPS or the backdrop of a zombie apocalypse. Human Resource Machine from developer Tomorrow Corporation doesn’t follow either of those routes, instead using the setting for a puzzle game that teaches (and then expands on) a basic programming language.

The puzzles presented are essentially quite simple, usually involving transferring a series of numbered blocks from an incoming conveyor belt to an outgoing conveyor belt, with a few calculations or limitations required between. How you go about solving these puzzles is where it gets interesting, as you write a basic program for your obedient worker to follow in order to output the correct blocks and satisfy your supervisor. No programming experience or even maths ability is necessary to get started as things start off very simple, even young gamers will have no problems at this stage.

The cute graphics reinforce the message that this is a game suitable for gamers of all ages. Although the dour office environment is as you’d expect bathed in shades of brown and grey the characters are big wide-eyed and scurry around enthusiastically and the atmosphere is generally quite positive. The language is fairly basic and welcoming, while the coding part of the screen has big, chunky commands in a variety of bright colours. The gentle introduction to programming fundamentals also suggests an easy experience, with most early levels completed in minutes. 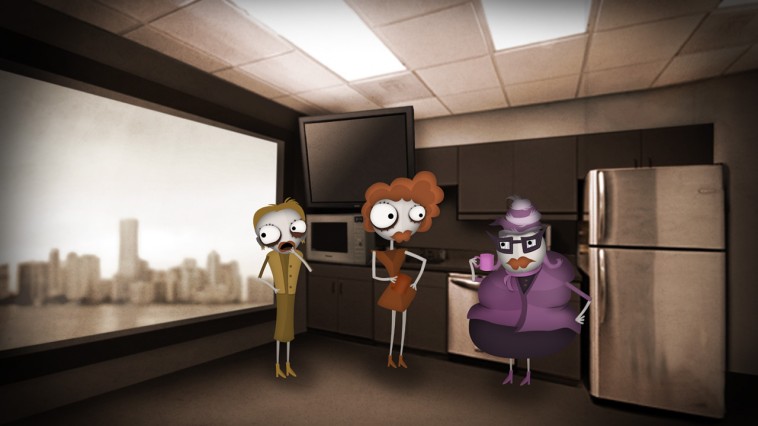 The difficulty does initially increase at a manageable rate and gradually introduces new commands and concepts but then the challenge starts to ramp up. They can eventually be solved with a bit of concentration but unfortunately I imagine many younger gamers will give up in frustration at this point. The actual computations required for each task aren’t especially arduous but the challenge comes from how you go about getting your worker to solve them with the limited commands available. Multiplying two numbers together sounds fairly straightforward for example, but not when you don’t actually have a multiplication command. Some guidance is given by your supervisor on each level and you can click on them again for further guidance and examples (as well as some humourous conversations) but a hint system would have helped in places.

However the biggest obstacle you’re likely to face in Human Resource Machine is the interface. It’s clearly been designed with tablets  in mind as the chunky commands are dragged into place while there’s a general sense it would function better with touch controls. This is even more evident when it comes to the notes you can insert into your programme or the screen itself as your comments must be drawn with the mouse with no ability to use the keyboard. The most problematic feature though is the programming part of the screen is limited in how much you can see which means you’re constantly having to scroll up and down to view your coding attempts so far. I actually ending up using a text editor (and even pen & paper on occasion) to work out the solution before repeating the steps in the game itself. 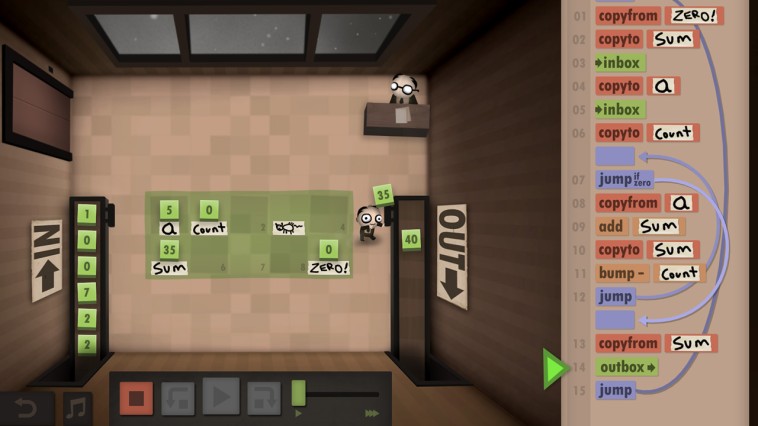 Despite these negative factors it’s worth reiterating that the game itself is very enjoyable. There’s a compelling and satisfying nature to the gameplay and it’s fairly easy to test and debug your coding to see where it’s going wrong. Once you’ve got the hang of a concept you can usually progress pretty quickly and experience more of the amusing storyline which is advanced through some brief cutscenes. If you do get stuck there are also some optional levels which branch off from the main storyline which often inspired me with ideas for my return to the main campaign.

Unfortunately there isn’t actually too much of Human Resource Machine to see with only 25 core levels to play through, admittedly with an extra 11 optional levels to experience. I’d stormed through half the levels within an hour although the remaining half did take significantly longer with several long periods of contemplation. There are additional efficiency challenges on each level to aim for but I felt no real compulsion to finish achieve these. Human Resource Machine would greatly have benefited from several more moderately challenging levels to pad out the middle section, and the lack of a level editor is definitely a missed opportunity. It’s a shame as with a few tweaks to the interface, more levels and a more forgiving learning curve this could have been a must-have for puzzle fans.