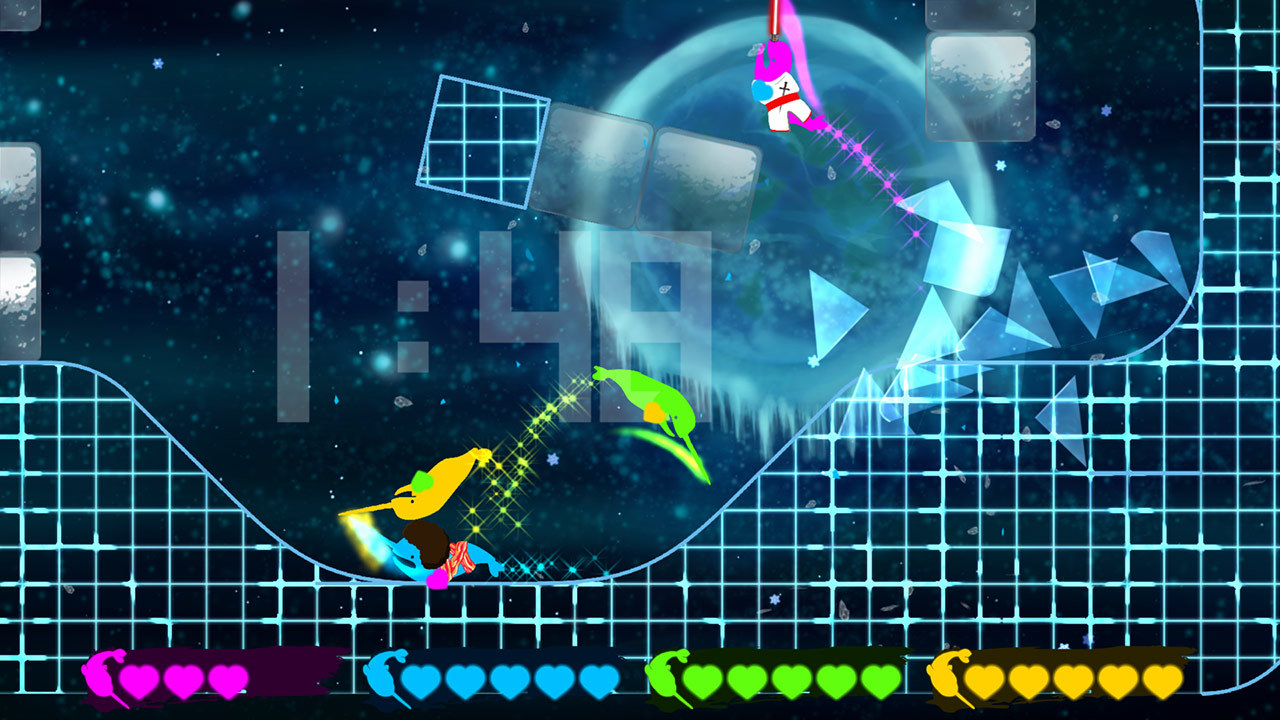 Somewhere between great fun and rage inducing infuriation lies Starwhal, the incredibly enjoyable but hugely irritating multi-player focused…….well, whatever it is.

A local multi-player party game at heart, Starwhal pits 4 narwhals against each other in single screen arena based combat. While that is certainly bonkers enough in its own right, add to that an 80s inspired, neon-heavy aesthetic, stages set in space and numerous movie related props for your narwhal of choice to wear, and you’re left with what is easily one of the strangest and most visually unique games of the past 12months.

The thing is, as bizarre as all that might sound, the gameplay is actually incredibly straight forward. While there are numerous game modes to choose from, the core experience never changes with controls limited to left, right and show off/taunt. The show off button itself just that – showing off. It has no actual impact on gameplay and can actually be completely ignored. That essentially leaves left and right as the only means of control. Again, that probably sounds about as simple as it gets, but in practice, controlling your narwhal is anything but.

Rather than simply moving left and right, tilting either way sees your narwhal spin in what initially appears to be an all but uncontrollable fashion. This is due largely to the fact that left and right is also used to actually move your narwhal in a specific direction meaning that you’re essentially in a constant battle between forward motion and spinning around like some space-based head case. 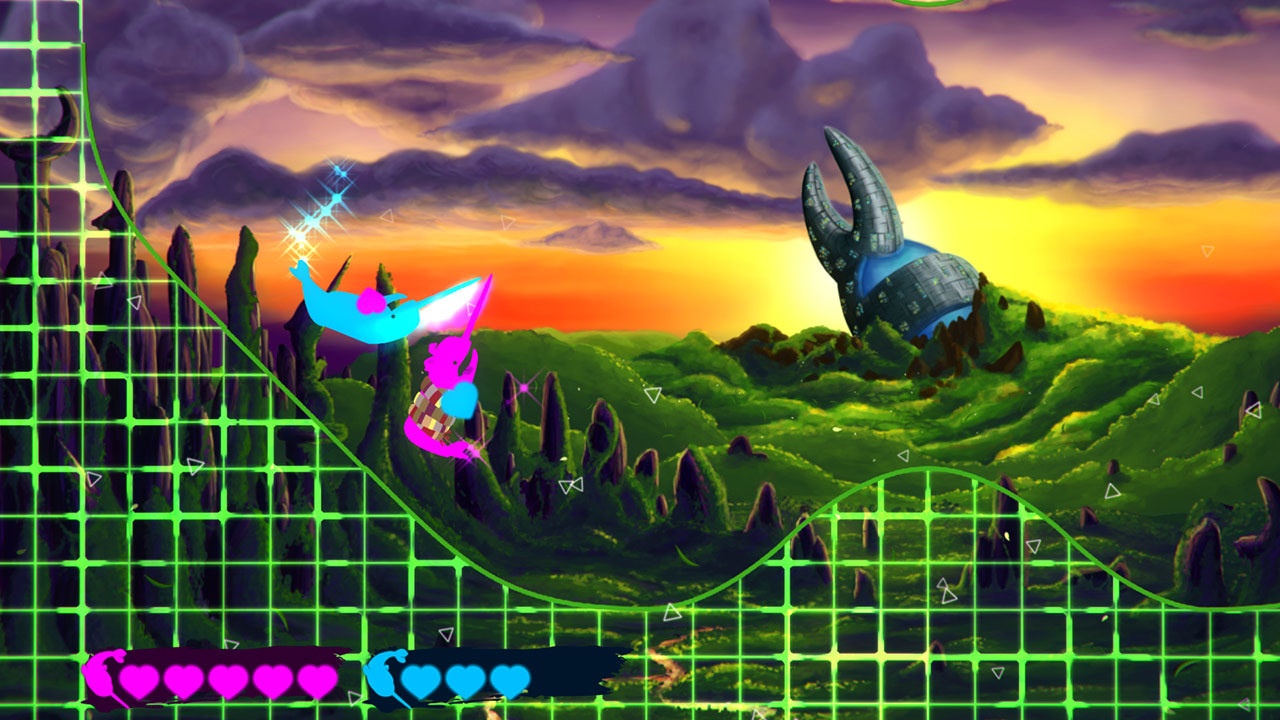 This is of course where the games’ fun and unpredictability comes from, but equally, for people such as myself, for those known to lose their temper on occasions, well, this control scheme might well drive you certifiably insane too. It’s quite the quandary – on the one hand, the game only really works because of its unique control scheme, but on the other, that same control scheme makes me want to go out and murder an actual narwhal (probably a lot trickier than I think). It would probably make more sense to air my grievances with the developer, but hey, the heart wants what the heart wants…..and it appears that my hearts wants narwhal murder.

Luckily, there is a way to get around this issue, and it’s really quite simple – only play with friends. Leave single player well alone. Don’t have friends to play with? Easy – don’t buy the game. In local multiplayer, preferably with three other friends (there is no online mode), Starwhal is an absolute riot. That combination of the control scheme being incredibly simple and yet all but impossible to master leads to some genuinely riotous matches with the game actually striking an almost perfect balance between complete randomness and genuine skill. If you’ve played enough, you’ll certainly get a better grasp of the controls, but honestly, I don’t think anyone will master them. Even the best players can find themselves in an uncontrollable spin as their hearts are plucked away by the horns of attacking / confused enemy narwhal.

There are numerous modes to get through, but for the most part, you’ll almost certainly find yourself coming back to the standard free-for-all battles. Similar to Mario Kart battles in tone, these see you start with a select number of hearts that can be burst by the pointy magical horns of the opposing narwhal. Like the gameplay itself, it’s an extremely simple premise, but again, it belies its simplicity to deliver what, in the right company, can be as entertaining as any other local multiplayer experience available on the platform.

The other modes, including twists on king of the hill and tag are fun enough, but they are brief distractions at best and won’t keep you away from the standard game mode for all that long. Each of them are worth at least a quick go, but honestly, many of them are horribly unbalanced, quickly removing that pitch perfect combination of randomness and skill that makes the primary free-for-all mode quite so fun. 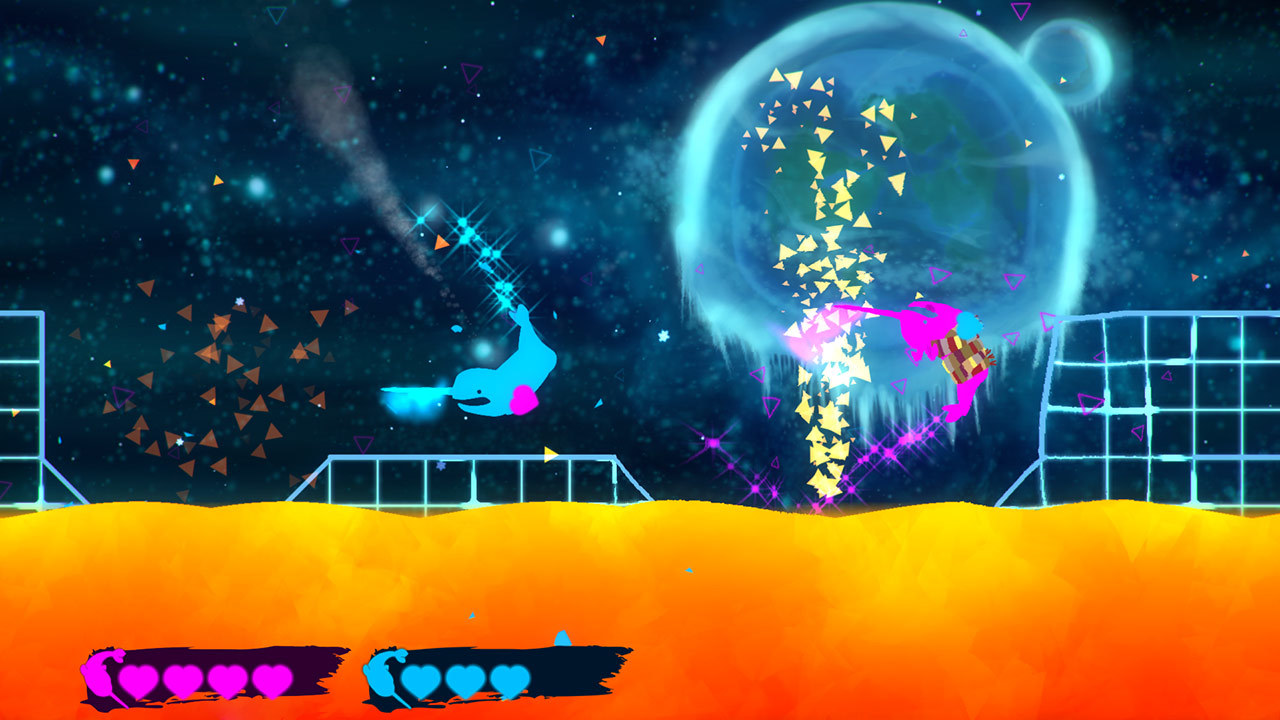 Beyond playing the multiplayer events against bots (and thus missing the point), the only other option for those opting to go alone are a selection of obstacle and target challenge rooms. This is where the game falls apart and rage ultimately wins out. While fun in multiplayer with friends, that bizarre control scheme is far too volatile for anything resembling score/time chasing events. The committed will certainly be able to improve their time and accuracy for these events, but for the majority, only anger, confusion and tears await. It’s simply too hard to know where you have gone wrong, and as any Dark Souls fan will tell you, high difficult is fine as long as you are aware that it’s your fault when you are killed. In those kind of games, you put up with the constant death because you know that you’re dead because you weren’t good enough – here, it all feels far too random with seemingly decent runs scuppered by your narwhal having an unexpected and wholly infuriating epileptic fit. It’s just not fun.

In local co-op, Starwhal is an incredibly enjoyable experience. It can bring gamers and non-gamers together and essentially place them all on a level playing field. The control scheme is as simple as it gets, but that unique method of movement gives just about anyone a chance of coming out on top. The relatively random nature of the gameplay ensures that it is not well suited to extended play, but as something that can be pulled out at parties, Starwhal is a huge success. As good as the local multiplayer can be though, the same can’t be said for the single player offering. Developer, Breakfall have certainly given it a go, but regardless of the decent selection of challenges available, the control scheme is just too random for it to work in conjunction with more traditional, skill-based objectives. Still, despite the single player being more infuriating than fun and the additional multiplayer modes proving little more than filler, when at its best, Starwhal is a truly bonkers multiplayer masterpiece.