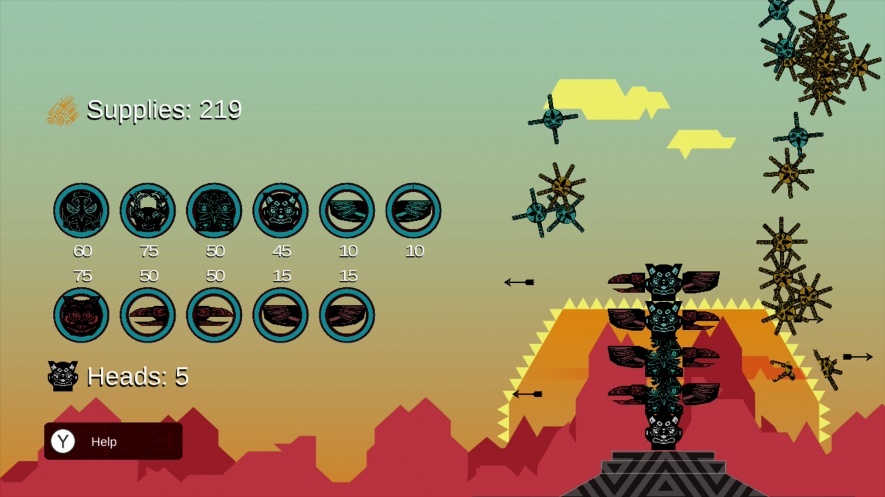 Totem Topple is a tower defence game where you build up a totem using different heads that give different powers. You can attach decorations to the side of your totem to provide direct fire-power or buffs to your arrow spitting bird heads or increase your health. Your aim is to defend your totem from rotating enemies or evil spirits that fall down either side of your totem and try to attack the bottom head.

Losing too many heads results in you losing the game. There are two modes, a normal mode and a frantic mode, where your pieces are selected completely randomly and you try to survive as long as you can while chaos rains down on you.

I did not like Totem Topple. I actually feel quite cheated that I need to write over five hundred words and make any kind of effort to put something together that is informative and borderlines on some form of entertainment. This is only because the developers of Totem Topple, Crystalline Green don’t seem to have been too bothered themselves about testing their game to see if it was any fun or if it was the slightest bit balanced or if the graphics served their purpose. Or bothered at the simple fact it should have been released without any real polish. 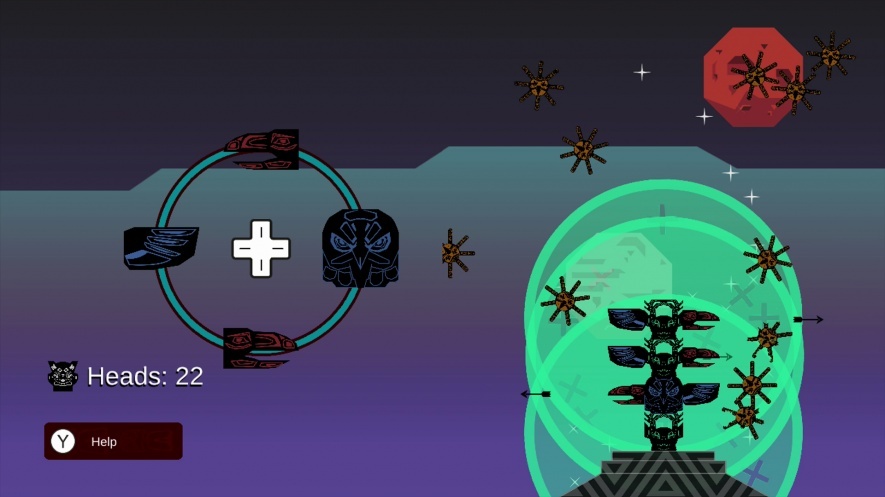 I spent a lot of my game time pausing Totem Topple so I could remember what most of the heads and attachments did. The totem heads don’t have any real graphical differences to them.  There seems to be no point in playing past a couple of games because there is nothing to unlock or work towards. Yes, there is a score attack and a league table but I could not see the point in trying to improve simply to keep on playing the same mundane game.

Most of the time your luck in the game will seem completely random because some games will last for ages while others are over in minutes and you’ve made no conscious change in your tactics,  you’ve just been overwhelmed because the AI has decided to throw a pile of evil spirits at you that you can’t possibly fight off.

It’s like Crystalline Green had a really great game all coded up the night before release,  then the elderly woman who famously took it upon herself to repair a fresco got involved, accidentally deleted the code and tried to recode the game herself. It really is that disappointing without the obvious worldwide meme potential. 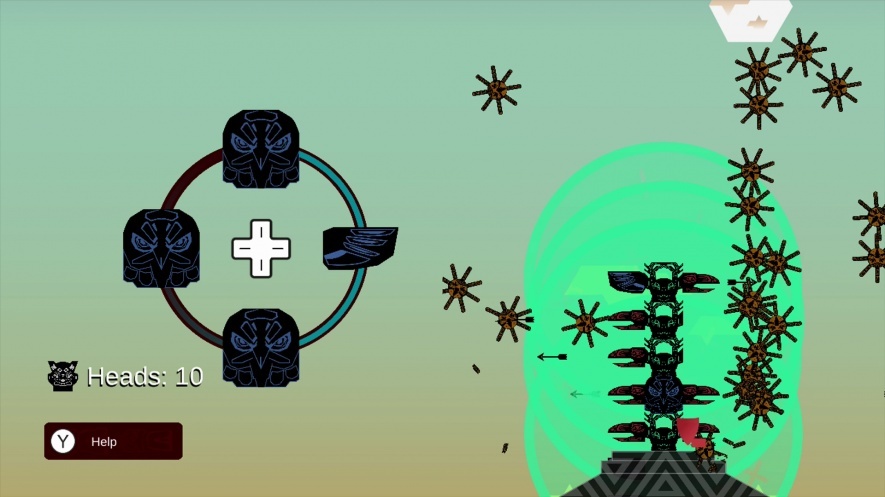 For a console well-known for its plethora of rainbow colours, the graphics are lazy and simple . The totems are dull and monochrome. The enemies lack any imagination unless dull coloured spinning wheels are your thing.

When I imagine what the totems could have been, how they could have been designed to make their powers seem obvious, how colourfully majestic and wonderful, it’s simply exasperating.  As someone who has played a number of games over the years, to see this presented as it is, you’ll even question whether the game your playing is a finished product.  There was the potential to add in information about totems and the customs surrounding them, but nothing.  There was the option to add in better music,  or improve the enemy AI or even spend some time making the menus looking inviting. But again, none of this has happened.

Totem Topple isn’t even laughably bad that it’s worthwhile giving it an hour of your time just to chuckle like you would a cult horror movie with it’s ham acting and fake scarlet blood. Go read a book instead, or watch a nature programme or hang up your washing or do some home baking instead, or play a game where the development team cared about what they were putting out there. Totem Topple is how not to make a game. The tragedy is that Crystalline Green had an idea for a game that could have been so much more, but they could not be bothered. You deserve a medal for reading all of this because you won’t feel any sense of reward playing Totem Topple.