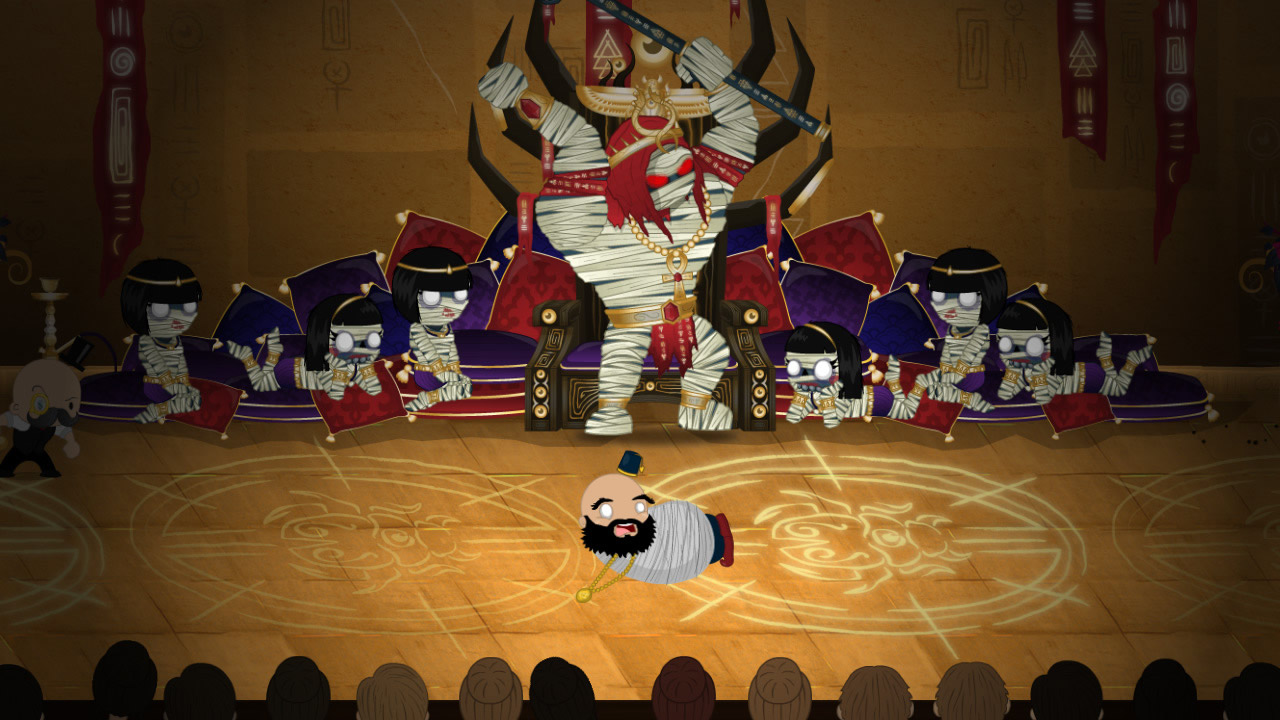 Is there anything more 90s than a beat-em-up? Be it X-Men, Turtles in Time, The Simpsons or Aliens vs. Predator, it seemed that every license worth its salt had its own coin guzzling arcade cabinet back in the day. Like much of the popular culture from the 90s though, the beat-em-up genre has been essentially forgotten and, outside of Behemoth’s surprisingly popular, Castle Crashers, has remained largely dormant in the subsequent decades. Everything works in cycles however and Mediatonic and Devolver Digital are betting on the gaming world being ready for a return to one of the 90s most beloved genres.

Like Castle Crashers before it, Foul Play isn’t relying purely on the power of nostalgia to drive its success; while undoubtedly built upon the traditional gameplay that the genre is famous for, Foul Play is home to a handful of unique twists that help it stand out from its predecessors while subsequently dealing with the humble beat-em-up’s Achilles heel – repetition. While still an issue here, the games’ unique setting, solid mechanics and impressive move-set do help to keep the gameplay relatively fresh, but unlike, Castle Crashers, which in many respects, actually embraced repetition, it does inevitably become an issue as your progress further into the game. 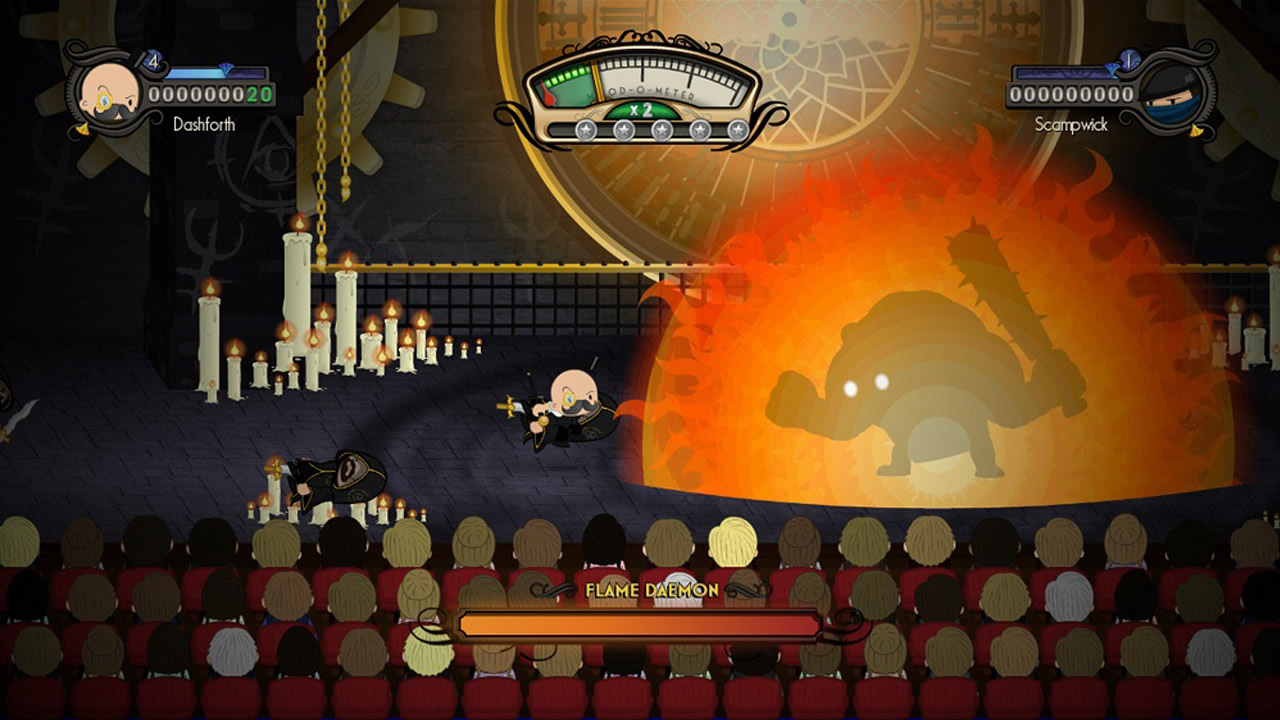 Unlike Castle Crashers, Foul Play is not home to a robust upgrade system that actually encourages and rewards repeat play. Sure, Castle Crashers ultimately became repetitive too, but thanks to its brilliant collection of upgrades and unlockables, grinding your way through stages often felt like a natural element of progressions. Sadly, the same is not true here – despite unlockable moves, stage specific challenges and a basic upgrade system, this is a much more linear, story driven experience, and while that is to be commended in many respects, it does mean that the traditional beat-em-up gameplay does start to lose its lustre long before the curtain falls on the performance.

Still, what a performance it is. The gameplay might ultimately run out of steam, but the fantastic premise, genuinely entertaining script and eccentric cast of characters all do a great job of keeping this limited but wholly pleasant experience ticking along rather nicely. The brilliantly named Baron Dashforth and his trusted sidekick, Mr. Scampwick (if you have a friend in tow), are tasked with fighting their way across what can only be described as the longest stage in human history, battling against an array of poorly but nonetheless amusingly dressed bit part characters as they attempt to woo the paying public watching the action packed play unfold on the stage before them. 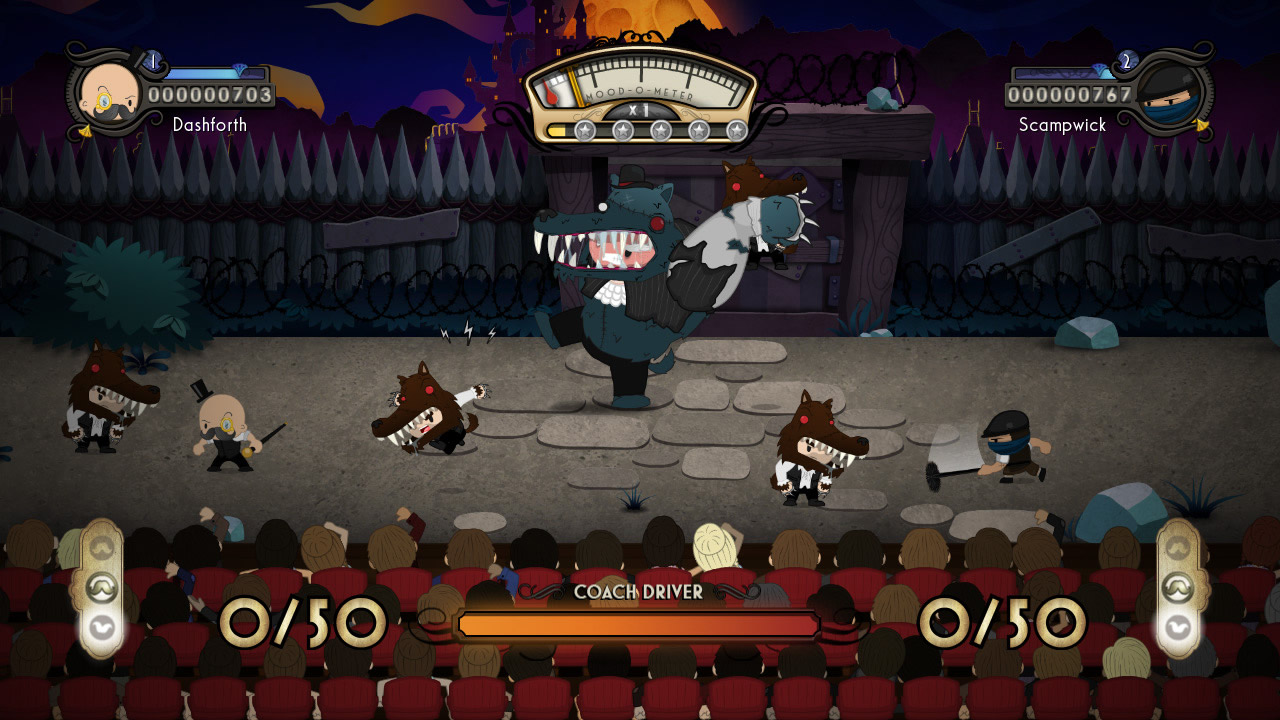 Much like Guitar Hero or Rock Band, success and failure in Foul Play is based largely upon keeping the crowd happy thanks to the inclusion of an aptly named, ‘mood-o-meter’, and while basic success here is rarely in question, the real challenge is to keep the action flowing and to subsequently leave the crowd in rapturous applause. Yes, too much of the game can be strolled through via basic button bashing, but like the horribly underrated, Ryse: Son of Rome, the emphasis isn’t so much on success or failure as it is on kicking ass with style. Be it throwing together more elaborate combos via the use of unlockable moves, avoiding attacks via well timed dodges or putting together a selection of counters and reversals to keep your attacks fluent, the constant feedback from the crowd does a great job of staving off the creeping sense of repetition that is always in danger of undermining what is an otherwise highly enjoyable brawler.

With its fantastically charming 2D aesthetic, it’s likeable cast of characters and some surprisingly funny dialogue, Foul Play, despite the issues inherent to the genre, remains a very easy game to like. The combat is solid, and while button mashing will often do the job, the mood-o-meter and very vocal crowd do a good job of encouraging a more adventurous approach to the on-stage violence. The core mechanics could certainly do with a bit more depth and a stronger sense of personal progression would have undoubtedly made the inevitable sense of grind more bearable, but for as long as it lasts, Foul Play proves that there is still plenty of life is this long dormant and much missed genre.