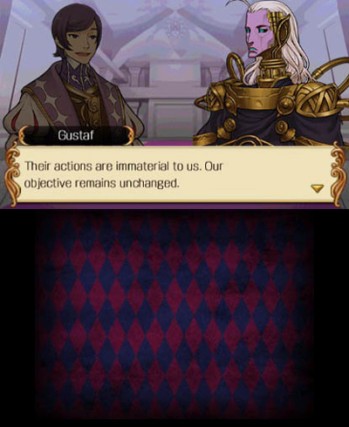 Langrisser Re:Incarnation -TENSEI- is the sixth game in the Langrisser series of Japanese tactical role-playing games. It has been given a physical release in North America, but is an eshop download-only title here in Europe. As well as the previous five main games there have been a whole host of spin-offs and remakes, but the only game in the series to make it to the west before this one is the original Langrisser, which was released for the Sega Mega Drive as Warsong all the way back in 1991. As such, it’s probably unsurprising that despite being a big fan of the genre, I have never played a Langrisser game before. And after playing Langrisser Re:Incarnation -TENSEI-… I kind of wish I never had.

The story of Langrisser Re:Incarnation -TENSEI- is basic fantasy RPG fare: a young hero is trying to protect his town from Imperial forces and chances upon the holy sword Langrisser, and then uses the sword to fight off the soldiers before eventually becoming embroiled in a battle between light and darkness. So far, so typical. Unfortunately, where Langrisser Re:Incarnation -TENSEI- starts to become atypical is in all the things it does wrong. 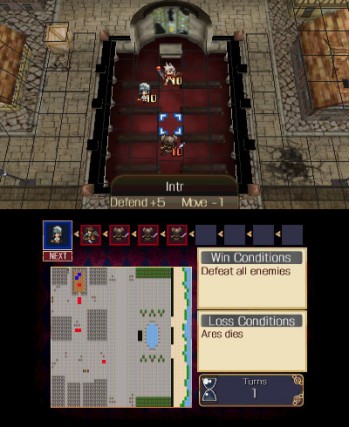 Firstly are the graphics. While the anime-style sprites during dialogue segments and cut-scenes aren’t too bad, problems arise when you’re actually in battle.  The sprites of the characters on the battle map are low resolution and ugly, looking like they were ported from the NES (or, to be as kind as possible, an early GBA title – but even things like Super Robot Wars: Original Generation and Final Fantasy Tactics Advanced seem far better than this in my memory). But what’s worse is the battle animation; while in Fire Emblem games we see characters strike at each other in an exciting way, helping to hype up the battle, in this game the animation shows two chibi characters (basic 3D sprites with super-deformed heads) stumbling towards each other in a way that only serves to lessen the excitement. Fortunately there is an option to turn off the battle animation, but it is disappointing that one has to do so.

The gameplay is similarly poor – while with such a honed format as the turn-based strategy RPG you would think that it would be impossible to do anything wrong, Langrisser Re:Incarnation -TENSEI- finds a way. There are loads of options that seem like no-brainers, but for some reason aren’t included here: for example, a quick-save feature in case you need to stop playing mid-battle, or guidance on levelling up characters (looking online, there is supposedly a fifth special class that characters can be levelled up to – but the way to do this is not explained in-game, and you’ll only get it if you go through a ton of trial and error). There are other numerous choices where the impact isn’t explained until AFTER you’ve made them – and this typically occurs just after a battle, meaning that you’ll have to turn of the system and complete the battle again in order to change your choice, which is extremely user-unfriendly. 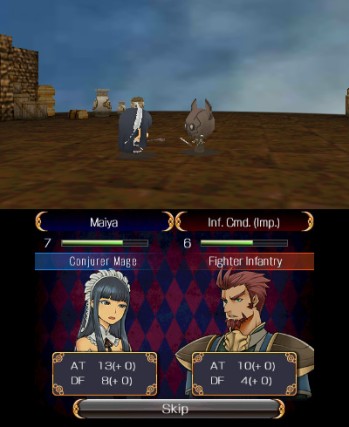 The aforementioned basic story is not good enough to warrant dealing with the game’s problems, and it also suffers from some dodgy translations that make it often difficult to tell what’s going on. The only good parts of the game are its soundtrack, by veteran video game composer Noriyuki Iwadare (seriously, look at his Wikipedia page – this guy’s worked on more games than I’ve played!), and some of the Japanese voice acting (although the game isn’t fully voiced, only voicing part of character’s lines and cut-scenes – but what there is, is still good).

In conclusion, I would have to give a firm recommendation to not get this game, especially given its £28.00 price tag. While there is plenty of play time contained, the actual content is poor, and feels even less polished than an indie strategy game like the awesome Mercenaries Saga 2, which is only £3.99 on the eshop! The strange thing is why this game was brought over here at all, when there are so many better Japanese games that have never been released in the west – I guess that will remain a mystery.  This is not the worst game, but when there’s so much better out there, there really is no reason to play it.