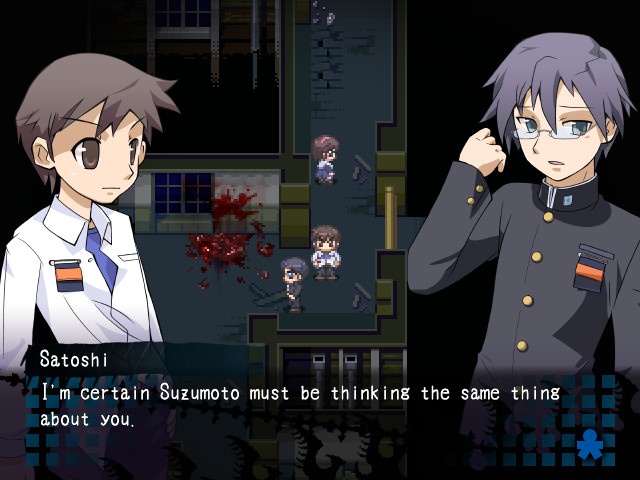 Way back in the 90s a game called corpse party was released which was made using rpg maker 98. The game was a hit and even made fans of the original create a few fan games. In 2011 the game was redone for the PlayStation portable. This was a complete rework of the original adding new characters, new plot twists and changing the way the story panned out making it much more dark and sinister.

The first thing I will say about this version of the game is it’s much more like the 98 original than the PSP release. The graphics are very retro looking and characters are illustrated using cute chibi like bust shots. Do not be fooled however this look is to merely throw you off how deeply disturbing of a game this is. The game may look like it’s been ported straight from a 3DS but it still does a job and people who no longer own a psp or never got a VITA finally get the chance to experience this game.

The Sachiko ever after charm which is said to bound people together forever is performed by Ayumi after school. She does this after reading up about it on the internet. However the charm sends them all to Heavenly Host stories have been heard about a school building that existed before this school was built.

The game throws you into an old abandoned school crawling with vengeful spirts that look to murder you in horrific ways. You will find yourself horrified at the great and explicit detail some of the wrong ends go into. Without spoiling too much I never expected to be swallowing scissors or eating one of my best friends after a curse was put on me just by simply reading the wrong text. 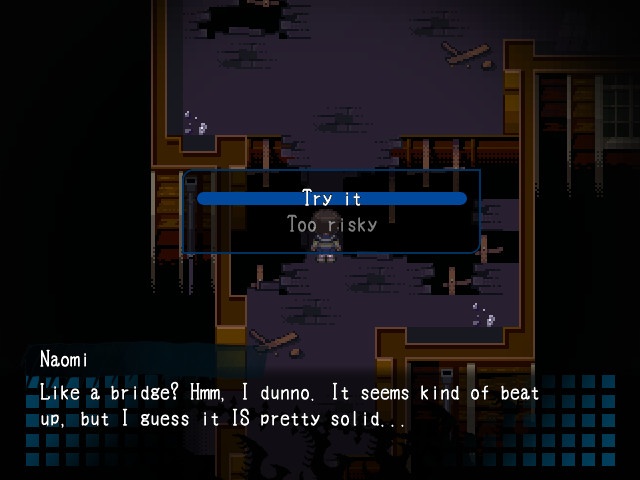 Corpse party is more a creepy traditional Japanese horror more than blood drive was, which at times really made me jump. It doesn’t really do much to terrify you, but it will at times weird you out. The characters range all but one are in high school and for this to happen to them really makes you feel sorry for them.

The character introductions are a nice way for you to get to know what the characters attitudes like and how they are going to deal with the hell they find themselves in. The whole game is based in an old elementary school called Heavenly Host, finding a means of escaping alive, many have tried in the past and failed by either starving to death or going crazy and ending their own life’s.

There is more to this than I’m letting off but without spoiling anything some have been horrifically tortured in ways you cannot even imagine. The story is pretty messed up, I found myself shocked on more than one occasion at just how far the game went. It’s just a shame that the really scary aspect of the PSP version the still pictures are missing, voice overs are present but it seems random segments those important to the story were selected more than the entire game.

The game is voiced over in Japanese and to be fair the voice cast does a great job of making you believe their pain with screams and how crazy they have gone when you here a sadistic laugh. The weakest part of this game probably comes down to the gameplay. There’s no combat what so ever and it’s more a puzzle game than anything else. You may be doing stuff incorrectly and not know it till later in the story too, A character could die you thought was meant to but wasn’t, so now you cannot progress any further and your destined to get a bad ending. Thankfully the game is kind and instead of restarting the game over you can just restart the single chapter. 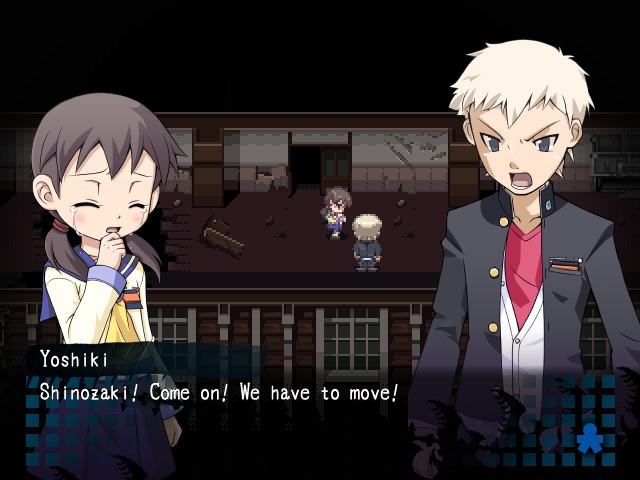 This does add to the atmosphere the game gives off unless you’re following a guide you want to explore everywhere unless told otherwise. Explore with caution though spirts patrol the corridors and reading a cursed note someone has left can have horrific consequences. The only way you can be sure you’re doing the right thing is either trust your gut or follow a guide I often found doing what seemed right was wrong it’s very much a trial and error game but it’s not all bad as you’ll want to see all the possible outcomes at some point anyway.

If you are one of those people who thrive on seeing every possible outcome well this game delivers. There are 32 possible endings in all these can happen from chapter one through to chapter five. This makes the game really intriguing sure the wrong ends are disturbing but there’s something about them that makes you curious to see them all. I recently watched the anime for this and well let’s say if they had cut scenes for the deaths from that I would have been a lot more disturbed. It fuels your imagination with how in depth it goes into how the characters feeling as they are dying, slowly.

The worst thing about this is if they die in heavenly host they feel the pain from when they died for all eternity over and over. Its descriptive writing at its very best the characters are kids and for these horrible things to happen to them makes you feel sorry for them, especially poor little Yuka. The extra chapters added give you some nice background information about the supporting cast more than the main group. How they died or what made them end up in Heavenly Host some answered question I had from Blood drive.

Corpse Party for steam is not the best version out there. It has the same core details as that from the PSP version however it falls flat by not having the scare factor that was present for blood drive. It shows its age with very basic game mechanics but for the love of the characters, music and story I would say any fans of the horror genre or anyone looking to disturb themselves a bit definitely pick this up.