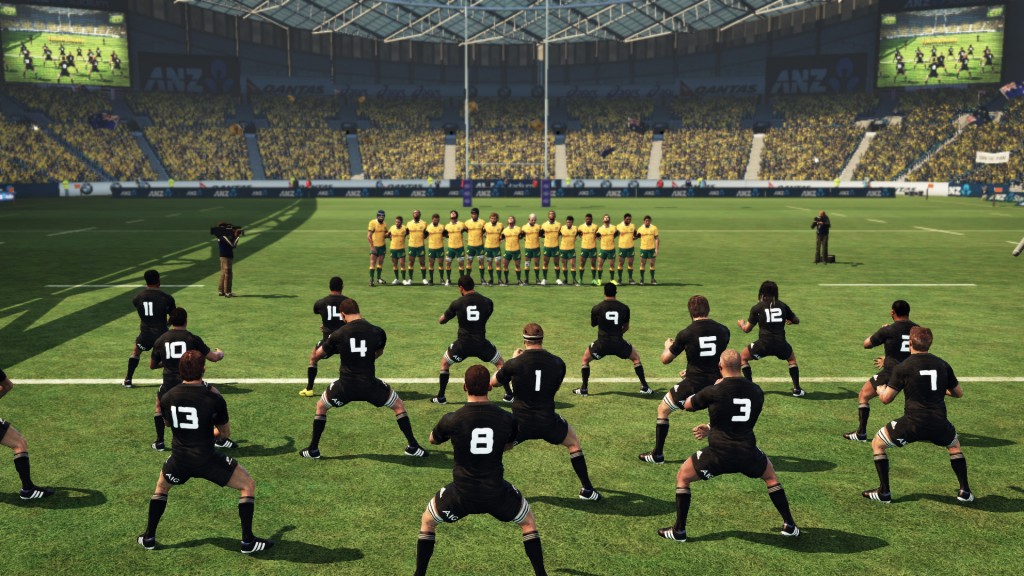 Rugby is a fantastic sport. Yes, being Welsh, I’m almost obliged to say that, but despite / because of its complexities, rugby is one of the most engaging sports on the planet. Sadly, while it is fantastic to play, and arguable even better to watch, it doesn’t necessarily lend itself all that well to video games.

Despite the basic premise of attempting to get the ball over the try line or kicking for goal being relatively straightforward, rugby is an undeniably complex sport, and while the same could certainly be said of its US-based counterpart, American football (or just, ‘football’ if you’re from the States), it doesn’t benefit from the more structured approach that makes the NFL such a perfect fit for videogames. Of course, American football can see a host of players challenging for the same ball, but the sport itself is broken up by plays, and despite the complexities that occur before the snap, once in motion, things do become relatively straightforward. Chances are, there will only be one pass (if any), and while each player on the field is certainly in action throughout the entire play, for video game purposes, the emphasis is moved to a much more confined event i.e. the receiver / the runner. Rugby though? There are so many caveats, so many different ways that the game can pan out. In rugby, you can’t simply get away with decent passing or running – there are simply too many moving parts.

Whether it be a scrum, a ruck, a maul, a lineout, competing on the ground or chasing a kick, nearly every action requires a unique set of mechanics and nearly all of them involve a huge number of the players from each team. You only need to watch a scrum in action to know just how much can go wrong…..throw AI into the mix and you’ve got a recipe for, well, if not disaster, at the very least undue complication.

There have been a handful of decent attempts at bringing this undoubtedly multifaceted sport to the world of video games, but the fact that it is generally accepted that no game has managed to surpass, Codemasters’, Jonah Lomu Rugby from 1997 really says it all. There have been a handful of enjoyable alternatives in the years since, but none have come close to providing a definitive virtual representation of the sport. In fairness, Tru Blu Entertainment and Wicked Witch Software’s, Rugby Challenge series is certainly one of the better ones, but as always, it finds itself stuck somewhere between simulation and arcade gameplay and, while undoubtedly excelling at recreating certain aspects of the sport, it still falls somewhat short in others.

The core gameplay itself, despite its technical issues, is mostly sound and, at its core, you could certainly make an argument for, Rugby Challenge 3 being amongst the finest rugby video games released since Codemaster’s PlayStation One classic. Rather than being bogged down by a commitment to simulation, Rugby Challenge 3 (like its predecessors), opts for a balance between arcade and simulation gameplay, putting fun first without ever compromising on the rules and subtleties that make the game essentially what it is. 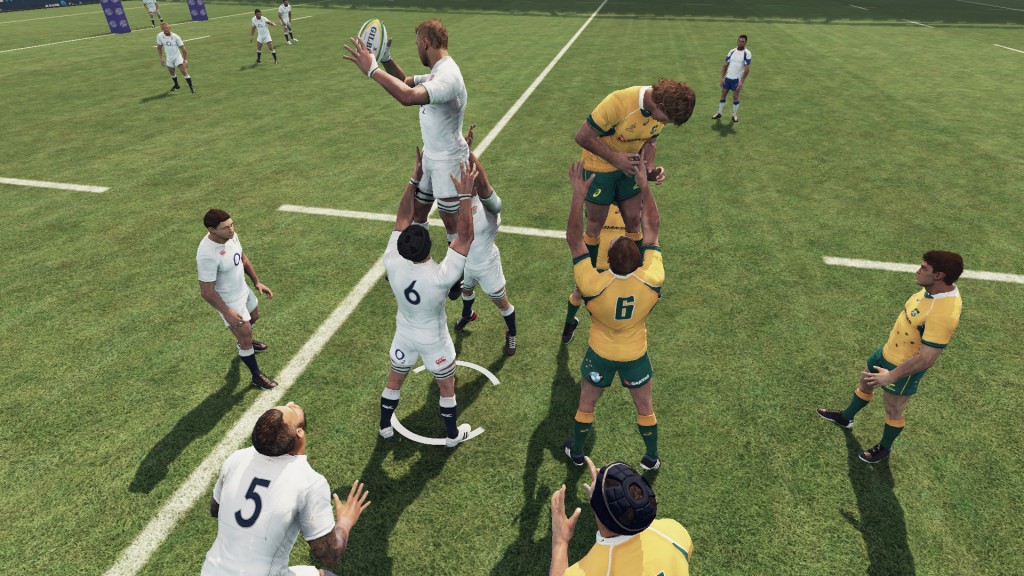 Passing, while crisp, is arguably one of the more simulation-heavy aspects of the game. Passing itself is as easy as pressing or holding the shoulder buttons (holding if you want to skip a player), but actually getting it to a member of your team, and more specifically, getting it to a member of your team who will subsequently be able to get over the gain line is another matter entirely. If you don’t let your runners get into position before release, you will often find them in traffic and under immediate pressure. Equally, throw the ball out of hand without care, and you’ll soon be giving up turnovers and loosing possession cheaply. It takes some getting used to, but it certainly makes you think more about building your attacks and keeping offensive players spare to provide additional offensive options.

On the ground, things are bit more straight forward. Whether it be a maul or a ruck, keeping possession is relatively simplistic with the main issue being one of managing the players committed to the breakdown and knowing when to release the ball. Sure, there are different prompts for different situations i.e. rolling mauls etc, but for the most part, inputs are kept relatively simplistic and pleasingly standardised. Things can look a tad messy at times, and the AI can be painfully slow to react to a ruck, but in terms of managing these situations within the confines of a video game, Rugby Challenge 3 does a relatively good job of delivering the experience without letting some of the more complex laws of the game get in the way of the action.

The same is true of the scrum. Some would argue that its implementation here is too simplistic, but equally, I think most rugby fans would probably admit that they have become too cumbersome and complex for their own good, serving only to slow down what is an otherwise blisteringly fast-paced sport. Whatever your views though, scrums have been converted into a relatively basic game of timing that allows even the smallest of packs to win back possession from more careless powerhouses. The team in possession really should remain so under normal circumstances, but get your timing wrong, and the ball can be snatched away rather quickly. Yes, it’s undeniably simplistic, but it keeps the game moving, and proves one of Tru Blu’s more astute compromises.

Sadly, the same can’t be said for the kicking which is far too simplistic. Whether it be kicking at goal or kicking to touch, finding your spot requires little in the way of skill and with jumpers oddly absent, even kick-offs feel horribly undercooked. It’s hardly game breaking stuff, but at this point, Rugby Challenge is long overdue a serious rethink of its kicking mechanics. You could say the same about the lineouts, but while they are equally straightforward, much like the scrums, the simplicity proves a good fit for the game with success and failure linked more to personal skill than the attributes of your chosen team.

Like the gameplay itself, the content is also a bit of a mixed bag. While there are many positives including the full Sanzar license along with an array of fully licensed tournaments that include, The Aviva Premiership, the New Zealand ITM Cup and the Australian National Rugby Championship (to name but a few), there remain numerous gaps, with the most galling being the lack of some pretty major international teams and some rather dodgy likenesses across the board. Saying that, there is a decent suite of editing options, and while the lack of an official Rugby World Cup or Lions license is certainly felt, that disappointment is somewhat diminished by the inclusion of the Seven World Series and a very solid, Be a Pro mode. 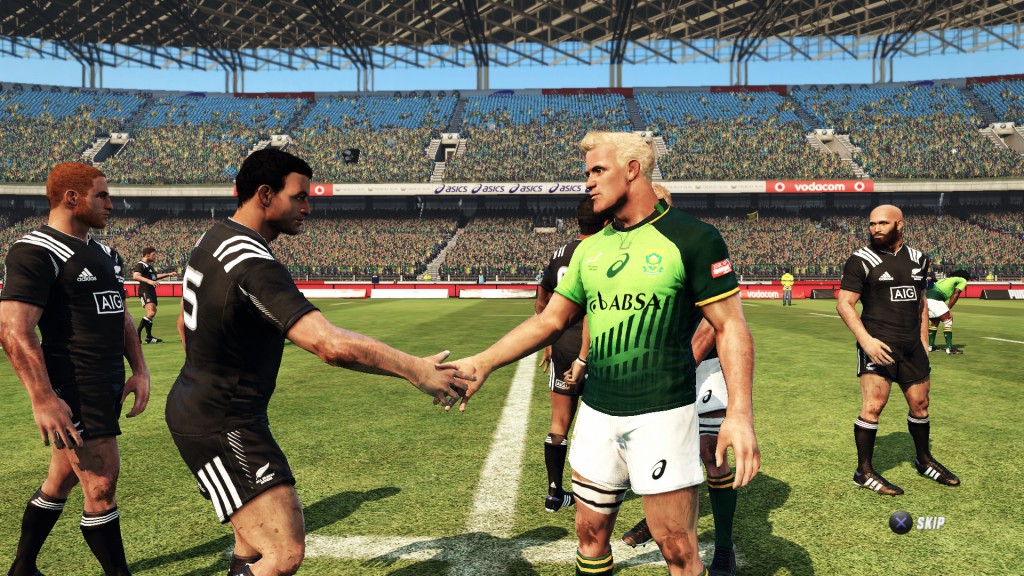 This mode has you taking control of single player as you take them through their career and hopefully toward international glory. It’s nothing we haven’t seen before, but it is kept engaging thanks to a very smart objective system that has you attempting to complete specific goals and objectives during a match. The online options too, despite being rather limited, are nonetheless solid and allow for easily organised private matches.

Rather impressively, Rugby Challeneg 3 is home to more than 40 unique stadiums, and while their presentation remains inevitably hit and miss, they do need to be seen within the clear budget limitations of the project. Yes, the character models, animations and audio all fall well short of the kind of expectations built up over years of high-end EA Sport development, but it’s clear that, within these confines, Tru Blu have done a (mostly) admirable job of delivering a visually solid if undoubtedly unglamorous representation of the sport.

It’s hardly the spiritual successor to Jonah Lomu Rugby that we have all been (patiently) waiting for, but despite its issues and its relatively budget presentation, Tru Blu Entertainment’s, Rugby Challenge 3 stands comfortably as the best virtual recreation of the sport this generation and a perfectly enjoyable rugby video game in its own right. The selection of licenses is better than ever, and while the player likenesses range from decent to horrifying, it’s clear that work has been done to make this a more realistic representation of the sport than ever before. The gameplay, by walking that tightrope between simulation and more arcade-friendly mechanics manages to find that sweet sport between accessibility and depth, and despite issues with the kicking game and the relative simplicity of the scum, Rugby Challenge 3 manages to deliver an experience that fans of the sport are likely to appreciate while still delivering enough in the way of simple fun that more casual fans will be able to get on board.