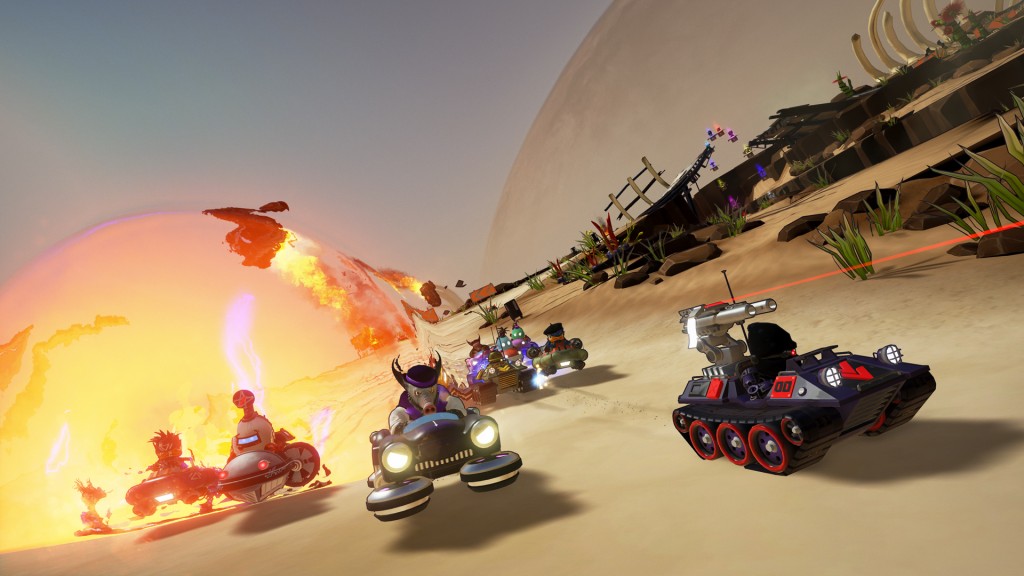 In a gaming world full of AAA level grinders and online multiplayer, it’s refreshing to see an ‘old fashioned’ same-screen party game breaking through onto Steam. Obliteracers is said title by Varkian Empire. It harks back to the likes of Mario Kart and Crash Team Racing, where destructive power-ups play a key role in each race. Obliteracers takes it a step further by adding in a solid physics system, endearing art style and single-screen multiplayer action to create a frantic racing experience. Without further adieu, let’s check out the good, the bad and the empty in Obliteracers.

Obliteracers unites people and once again forces us to mingle in reality as a species. It makes a change to see human beings in the flesh, as opposed to sitting in a darkened room, donning a headset and shouting expletives about my opponent’s mum. Each player controls a character astride their bizarre alien vehicle of choice. The basic premise is that you zoom around the track and collect power-up weapons to help dispose of your opponents. Several different game modes and ‘mod’ combinations mean each race is different – but let’s get to that in a minute. Just wanted to say that the same-screen same-room multiplayer is cool and it works; even allowing up to 16 players to use their mobile phones or laptops as additional controllers.

Now as I said there are these ‘mods’ so that each level may feel varied. It’s a bit of a poisoned chalice as there are only a tiny handful of levels to play on. By supplying modified rules across the board, it means players can get a bit more variety out of each map. With that said the mod system starts to feel like a cop-out for designing more levels. Similarly there are only a handful of character models, after which a duplicate is made and given a different paint job, name and number. It’s a shame because the art style is fantastic – lots of vibrant colours and characters you really want to punch as they gloat at blowing you up.

The devs have missed out on the opportunity to sneak in some extra replayability in the form of unlock able characters. In career you seem to be locked in as one character with no way of changing it. Perhaps if the player could beat a particularly hard challenge to gain a new character, it would keep me coming back for that sense of achievement. This said I don’t think it’s too big an issue, especially if they release some new characters in a future content update *hint hint*. 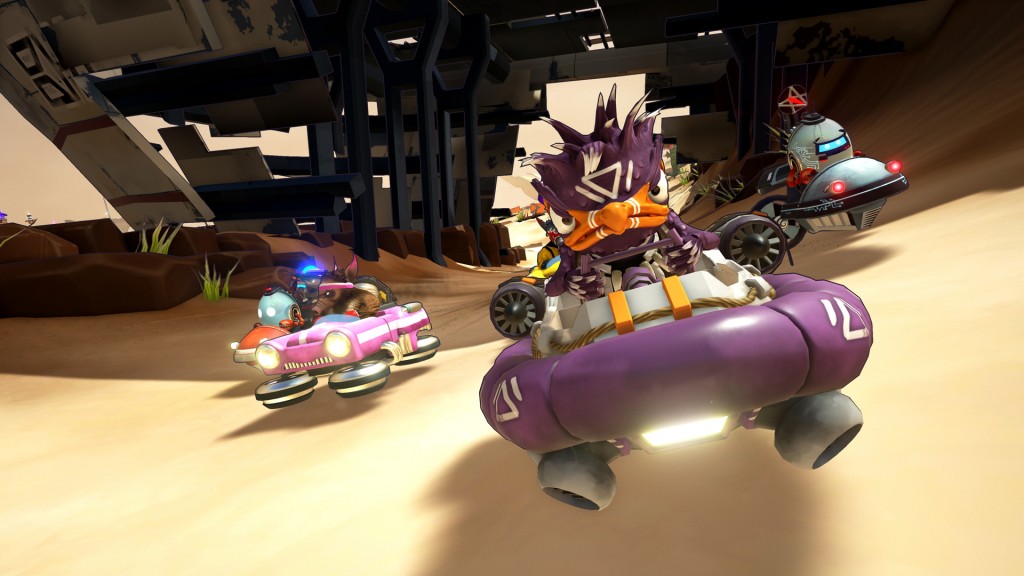 Minor cosmetic issues aside, Obliteracers is a solid game. I’ve noticed a lot of people moaning about the camera but honestly, I found no issue with it’s movement in single or multiplayer modes. The controls are slick and responsive: just what you want from a fast-paced and chaotic racing game. Controls are surprisingly good on mobile phones, laptops and other devices also. Obliteracers matches are quick so players can set it up and dive straight into the action. It allows you to “just have a quick game”, but I guarantee you won’t be playing one match, more likely 3 or 4 due to that “one more race” kinda feeling.

Physics feel solid and contribute to the skill level of the game. Controlling how your vehicle lands is important, as is timing when ramming other players off the track; something I discovered as I  plummeted into a bottomless pit screaming “NOOOOOOOOOOooooooooooo” and shaking my fist at the sky.

I love the bouncy, tropical, feel-good dance soundtrack they’ve got going on. Separately the soundtrack would cost you £6.99, which is not far off the price of a full album of music. It reminds me of Mario Kart as it’s jovial and somewhat whacky. Not sure I’d fork out to be able to stick it on the iPod, but it’s a cool soundtrack nonetheless.

In the campaign there are tooltips before each level. This makes it feel like a tutorial throughout and so even in the later levels you don’t feel like the game has let go of your hand. It feels like it’s gearing up to a proper campaign or cup tournament as in Mario Kart.

In multiplayer there are no dedicated servers, meaning you have to put up with potentially rubbish connections in a P2P system that is somewhat dated in this age of gaming. If you’re more likely to play with mates though it’s no biggie, as local multiplayer boasts all the same tailoring options when setting up and hosting games. 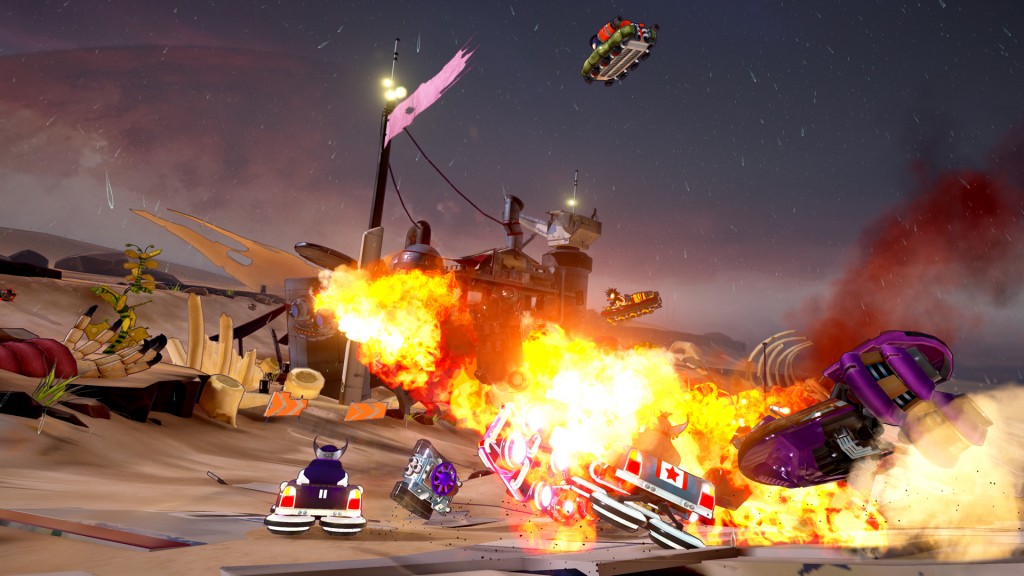 I’ve noticed that in Obliteracers if you die and decide to skip to the outcome of the round, there seems to be a kind of glitch whereby nobody is awarded points. For example I skipped the round after dying and the game showed one of the computer players celebrating winning the round, yet the round summary says “nobody survived” and 0 points are awarded. It doesn’t bother me when I’m languishing at the bottom of the leaderboard, but if it is a glitch it feels like your poor driving is let off by the glitchy gods of the game.

When you die you can take control of a homing missile which is fired from off-screen. This is most certainly not a glitch but i hope it gets taken out of the game anyway, as it’s by far the worst feature. The missile is easy to master and once you’ve got the knack of it, it becomes a cheap tool for preventing other players from scoring points. In my opinion it detracts from the fun a little as unskilled drivers can have some form of control over the outcome of matches.

Despite feeling like I’ve moaned too much about Obliteracers, I actually thoroughly enjoyed playing it. There is fantastic potential here that needs moulding in the right way in order to make it into a truly flawless title. It’s won 2 awards and been nominated for another for goodness’ sake – it’s even got a Meteoritic score of 81/100. Not bad for a little indie game right? Despite the minor gripes I’ve hyperbolised above, the game is fun – and according to the dictionary, a game is “an activity one engages in for amusement”.

The restricted maps and character pool really do make Obliteracers feel somewhat empty. Despite this I’ve given the game a 7/10 overall because it is addictive. I used to play Mario Kart and Crash Team Racing as a kid and discovered that light hearted combat racing is really fun – in fact I think that harks back to the days of Road Rash on Megadrive. I can see a great future for Obliteracers as it has a solid base i.e. great physics, interesting weapons and neat graphics; but it’s now up to the developers to make sure they whack out some content updates to move the title forwards.