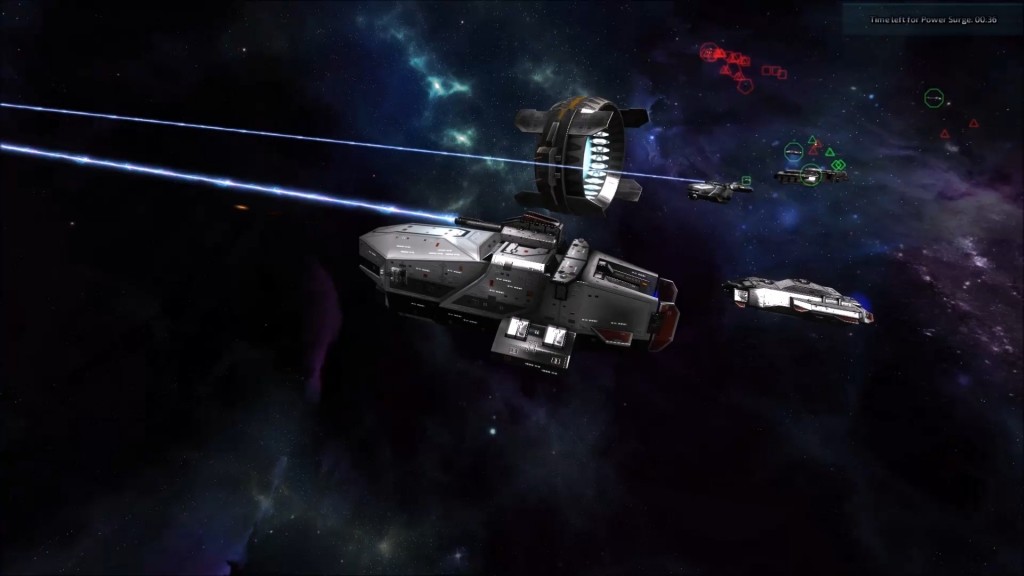 In the early stages of Nomad Fleet, I stumbled upon an alien ship that had collided with an asteroid mid-warp. Harvesting the remains of the vessel would be invaluable to my mission, but standing in the way was a fleet of space pirates ready to claim this discovery as their own, by any means necessary. I had two choices; fight my way through to retrieve the spoils of war or warp out of the system, ensuring what little resources I had left remained intact. Nomad Fleet boils down to a series of tough decisions much like this one. Putting the last remaining members of the human race up as your stake, every action is essentially a gamble, as you journey further into the unknown.

Right from the get go, it’s clear the one man band indie developer Autarca Studio (AKA Chilean programmer Jorge Pacheco) has a keen adoration for cult sci-fi. The plot to this real-time strategy is effectively a homage to the recent version of Battlestar Galactica, as you guide the human race across the galaxy to safety, albeit without murderous robots nipping at your heels. Instead, your opposition comes in the form of space pirates, alien xenos and rival civilisations, who all view your caravan of refugees as a threat to their intergalactic shenanigans.

The path to freedom consists of a series of hexagonal tiles, each one representing a sector of deep space filled with mystery and peril. Warping from tile to tile almost feels episodic as you venture into the unknown, poised at the ready to defend your fleet at all costs. And generally speaking, that’s what you’ll have to do as the game randomly generates events that open up the real-time side of the gameplay and thrusts you head first into battle. Now and again you can enjoy a moment of respite in the form of a trading post, but for the most part, Nomad Fleet is a series of desperate deep space battles that deliberately puts you on the back foot. 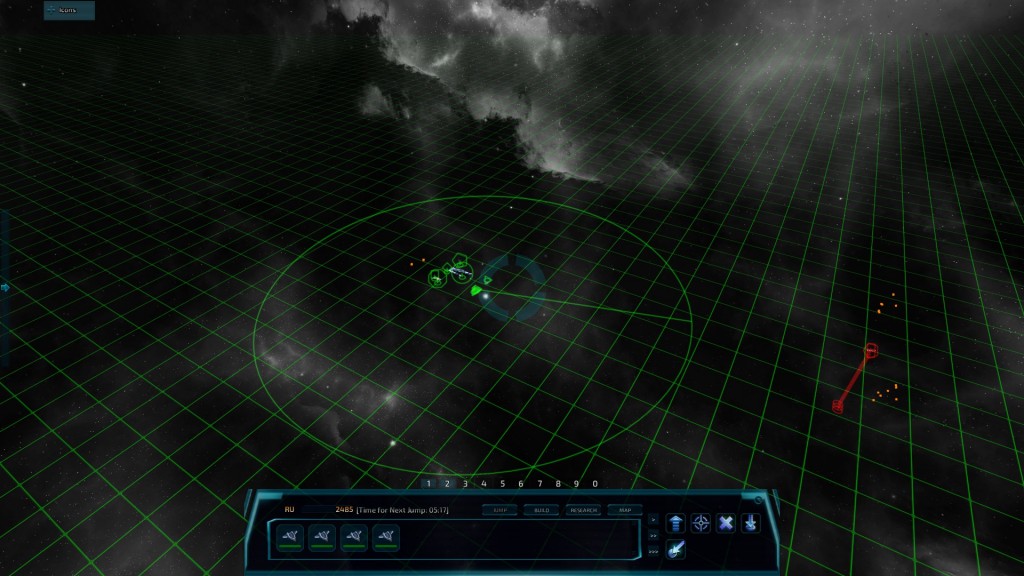 Upon arriving in a new sector of space, your scanners will reveal what dangers lie ahead and your small arsenal of fighters will launch from your mothership. Your hyperdrive engines need time to warm up again, so all you can do in the meantime is fight off any enemy forces and harvest the limited resources that the area has to offer. On occasion, the game throws a curve-ball and invites you to make a choice, much like the one I described earlier. Assisting allied fleets or harvesting bountiful resources often comes at a price, as the game throws an overwhelming enemy fleet in your general direction. This helps break up the gameplay and make each individual feel almost unique, all while fleshing out the universe in the process.

Real-time combat unfurls on a three-dimensional battlefield, giving your ships plenty of room to perform defensive manoeuvres and devastating bombing runs. A combination of fighters and bombers can be utilized to take down opposing threats, but generally victory can be achieved by taking care of an enemy mothership or surviving long enough to warp out of the system. Generally speaking, your fighters are responsive to your commands, although on occasion I did notice they ignored a direct order in favour of chasing down a fleeing enemy fighter that was passing by. And while tactical options are somewhat limited, the game does an effective job of creating a quick-fire battle that is as tense as it is difficult.

A minimal console allows you to fulfil the ship management duties with ease while the combat takes place in the background. A harvester unit collects resources from each system that can be converted into new fighters or used to research upgrades that will give you the tactical advantage in battles to come, such as improved weapons or shields for example. Trading posts scattered throughout the galaxy can provide more powerful units but with resources being severely limited, balancing the books while battling your way through deep space can be tricky task. At this point optional objectives become more appealing, as long as you’re willing to accept the consequences if the outcome doesn’t pan out in your favour.

The gameplay does a good job at keeping you on your toes and hammering home the idea that above all else, survival of the species is critical. It’s clear that inspiration has been taken from other space RTS sims such as Relic’s Homeworld Saga. But while the gameplay doesn’t deviate too much from the tried and tested formula, it should be noted that all of the leg work for Nomad Fleet was done by just one person. The fact that he’s managed to mimic some of his favourite games should be applauded rather than frowned upon. 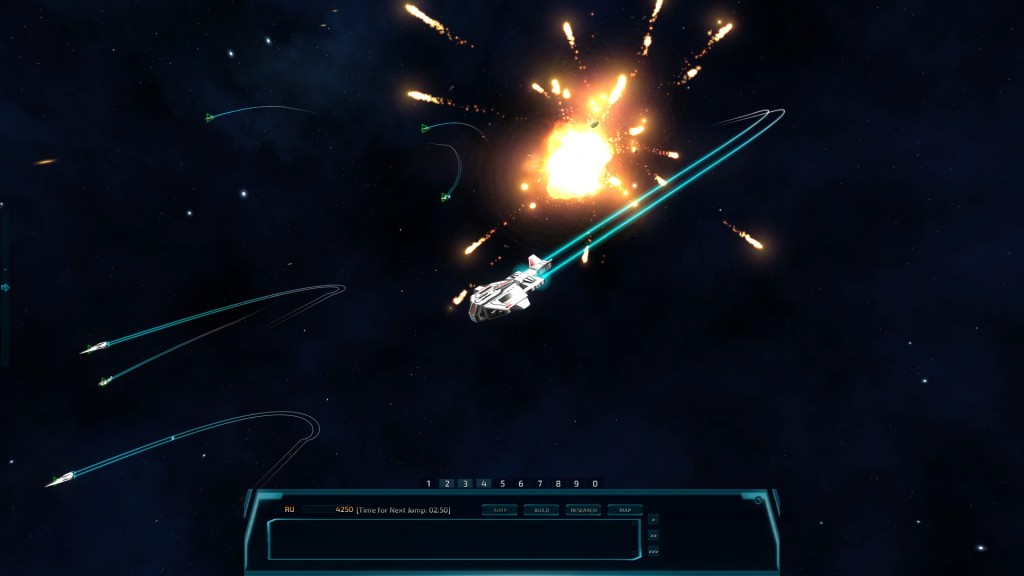 The same goes for the graphics which are both humble and effective. There’s no question that better looking space sims exist, but Nomad Fleet works with the tools it has been given to create units and environments detailed enough to set the scene and even present some cinematic battle sequences in the process. Camera options allow you to survey the battlefield from a wide perspective, or alternatively tack onto a ship and follow it as it thrusts around the sector hunting enemy ships.  The same goes for the tribal music (another Battlestar Galactica trope) that punctuates each battle by striking both fear and courage into the player’s heart.

On the downside, as much as the game tries to mix things up throughout each sector, the core gameplay limits itself sooner rather than later. Encounters with enemy vessels all play out in the same way, save for some poorly written dialogue before battle commences. With a lack of in-depth tactical options on offer, there’s little wiggle room in terms of strategies and at times, it all boils down to either which side has the most resources to enhance their fleet or if you can hold off the enemy in time to make an emergency warp jump out of there. The game is also rife with technical issues such as enemy ships spawning on the other side of the map and menu overlays opening on top of one another.

Even experience strategists, who may complain over lack of tactical features and innovative gameplay, will appreciate that much of what’s on offer is essentially a homage to some of their favourite space sims. A procedurally generated universe and the threat of human extinction keeps you coming back to what would normally be considered basic and repetitive gameplay. So while Nomad Fleet may not be a game changer in terms of real-time strategy or even space simulators, it’s a commendable love letter to the genre that’s unsurpassed in its ambition and tone.