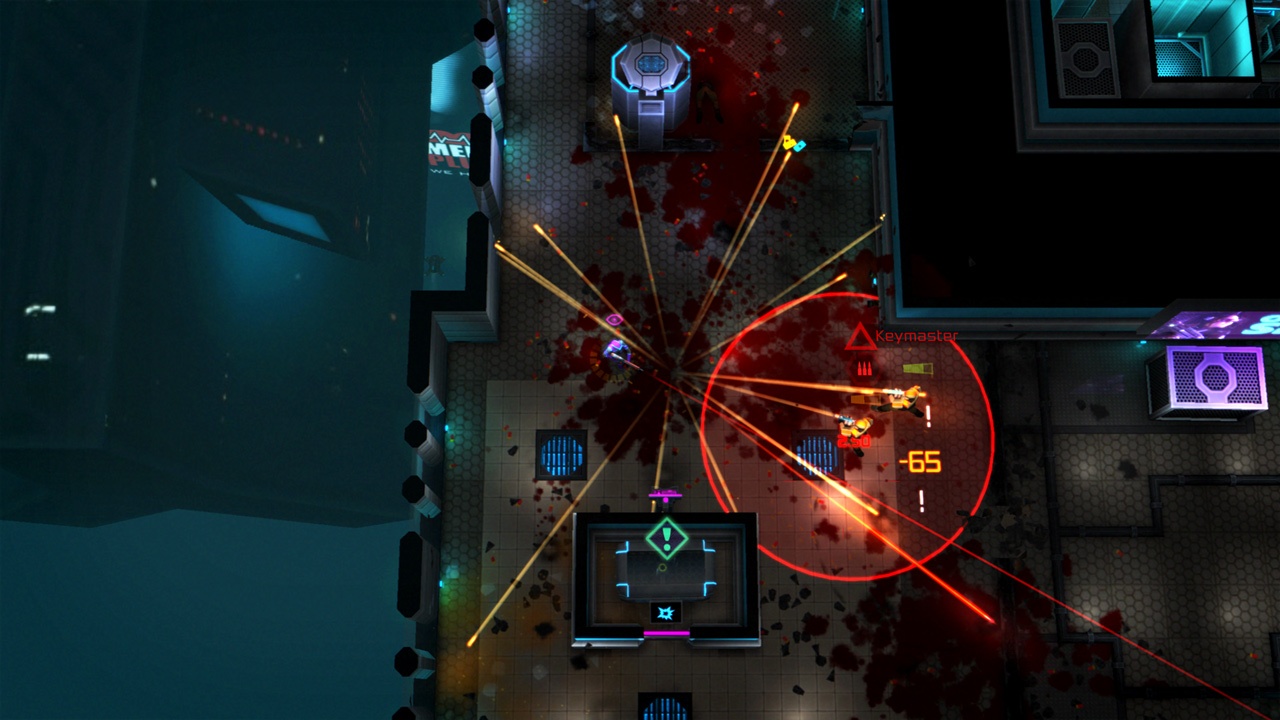 Finnish developer, 10tons are quietly making a name for themselves thanks to a collection of small but often very entertaining video games (video games that usually make their way to just about every platform on the planet). From the twin stick shooter, Crimsonland to the more mobile friendly likes of Tennis in the Face and Oddball, 10tons have slowly built up their reputation on the back of a collection of solid, if conceptually unspectacular titles.

While their previous work has perhaps lacked ambition, their latest title, the cyberpunk noir-inspired, Neon Chrome shows a developer looking to move up a gear and try their hand at something a tad more complex. Don’t get me wrong, this is still relatively derivative stuff, and there is certainly nothing here that you haven’t seen elsewhere, but the systems in place all work well with the traditional top-down twin stick shooter mechanics marrying up brilliantly with the roguelike structure that drives the experience.

Visually, Neon Chrome takes its cues from 80s cyberpunk noir with Blade Runner being the most obvious source of aesthetic inspiration (albeit with a tad more neon than noir). It’s a relatively basic game from a technical standpoint, but beyond a few instances of slow down, the aesthetic serves the gameplay well, giving it something of a unique mood and tone within the genre.

The game itself combines roguelike fundamentals with solid twin stick mechanics rather successfully, creating a game that is fun to play in terms of the basic moment to moment gameplay, but one that proves incredibly addictive in the long run thanks to the constant drive to improve your weaponry and abilities. 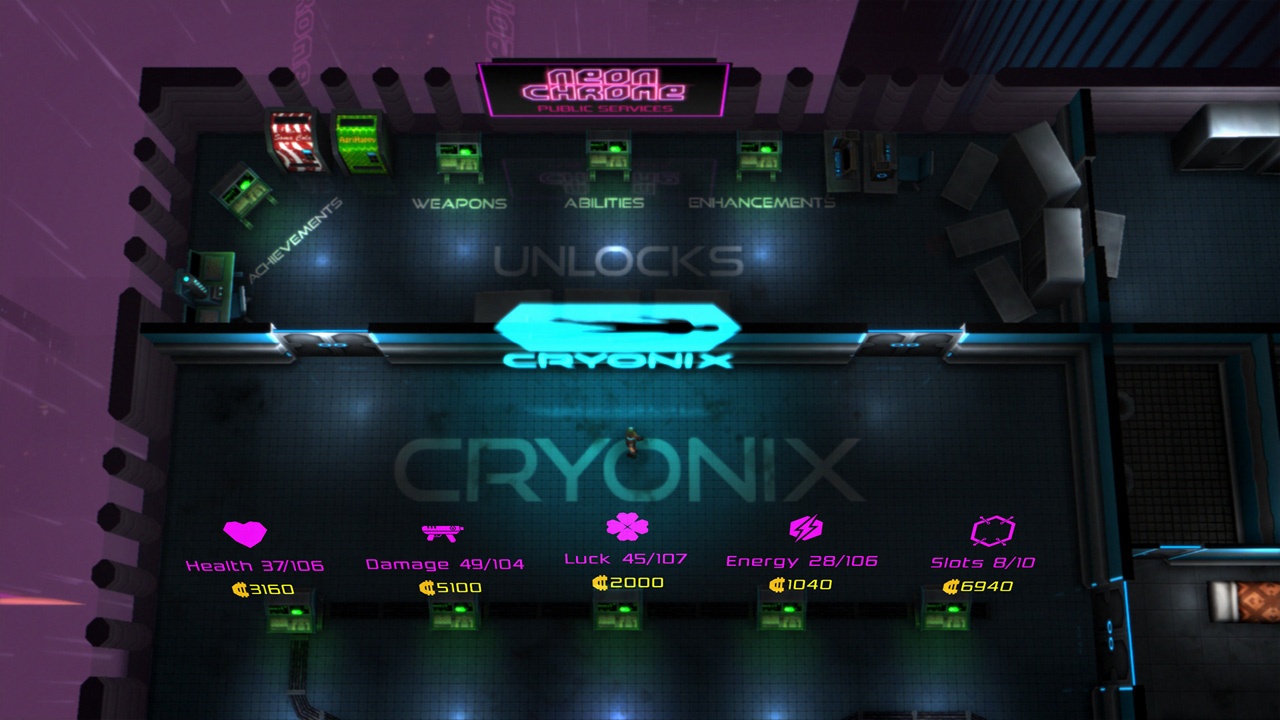 Like many roguelikes, some difficulty spikes can feel unfair (the boss battles can be especially brutal) with the grind occasionally tiptoeing into slog territory, but despite these admittedly fleeting moments of frustration, for the most part, Neon Chrome walks that tightrope well by delivering just enough in the way of new powers and abilities to make the game feel consistently fair. Whether it be a new assault rifle, a health stat upgrade or a new cybernetic enhancement, Neon Chrome has a good habit of providing enough in the way of new powers to make you believe that you’ll overcome that previously unassailable challenge the next time around.

While repetition is always an issue in roguelikes, the procedural generation of each stage does make repeated play much easier to bear. Yes, there is an argument for procedurally generated worlds coming at the price of continuity, but in the case of Neon Chrome, the 30+ stages are built upon a Dredd / The Raid-esque structure that see you making your way up a futuristic tower block in search of the games’ big bad, The Overseer. While the story isn’t up to much and the structure little more than window dressing, it does provide a more grounded environment and a constant reminder of what you are trying to achieve while delivering a strong reason to keep pushing on when you are getting your ass kicked.

As far as roguelikes go, Neon Chrome is certainly one of the more user friendly of its kind. Death is still an inevitability, but by having fixed stages and not being dragged back to the start each time you are killed ala Rogue Legacy, Neon Chrome doesn’t feel quite as brutal as some of its more unforgiving brethren. While that does mean that you’ll miss out on blitzing earlier enemies with a newly powered-up hero, it does at least make for a more approachable gaming experience. 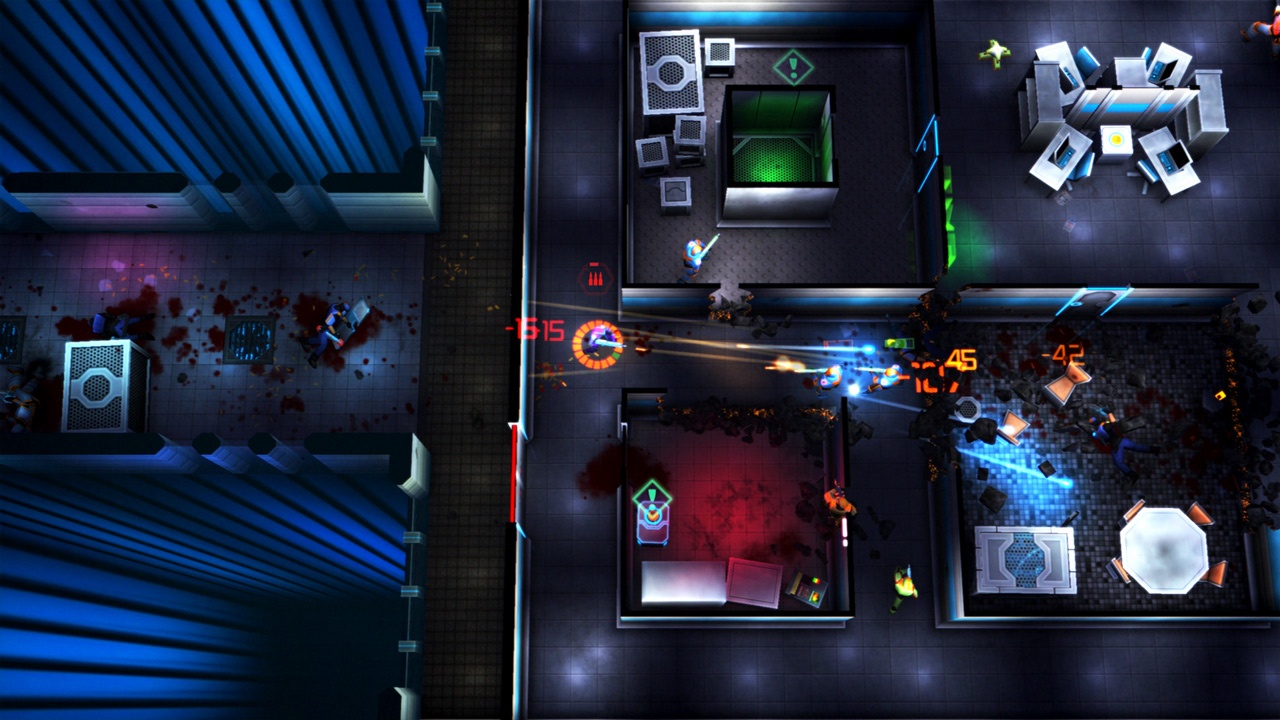 Still, as successfully implemented as the structure might be, it would all count for little if the fundamental mechanics weren’t up to scratch. Luckily, while relatively basic, the twin stick controls are slick, responsive and largely entertaining. Some of the weapons do have an air of the pea shooter about them and collecting key cards can get boring after a while, but for the most part, this is solid stuff with the unique classes and wealth of unique abilities providing enough in the way of variety to make this a fundamentally enjoyable shooter. It’s a shame that there is no online co-op (something that is arguably tricky to manage in a roguelike), but the inclusion of local multiplayer does at least provide additional longevity for those able to take advantage of it.

Like the majority of 10tons games, Neon Chrome is far from original and often borders on the derivative, but despite delivering nothing we haven’t seen done before, this remains a highly entertaining twin stick shooter that is made all the more enjoyable thanks to its roguelike structure and cyberpunk aesthetic. It’s not the best shooter out there and it’s far from the best roguelike on the market, but by bringing those two worlds together, 10tons have created an experience that is arguably greater than the sum of its individual parts, one that easily stands as their most ambitious title to date.