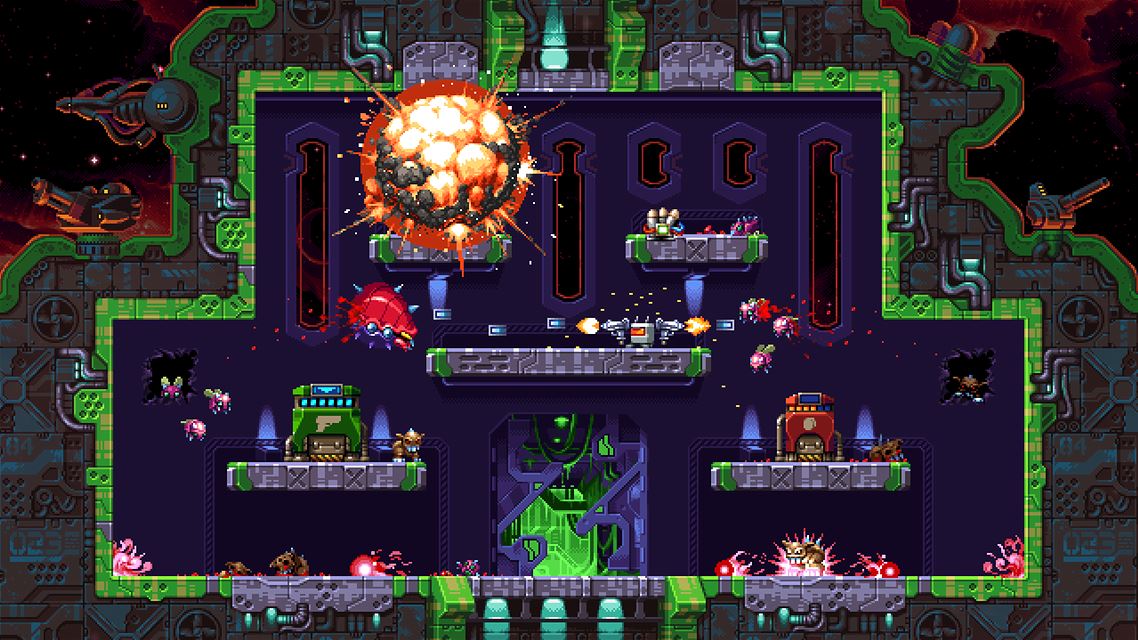 Like most dedicated gamers, I have a long list of upcoming releases that I’m looking forward to. One game that wasn’t on my list and went completely under my radar was Chris Suffern’s “Super Mutant Alien Assault”. A brutal arcade action title that boasts of a plethora of Guns, Gore and Dub Step. Well, ok, it isn’t particularly gory, but there is certainly a lot of weapons, power ups, fantastic music and superb presentation.

In Super Mutant Alien Assault earth has been attacked by aliens and the only surviving humans have evacuated in a state of suspended animation. The only things defending the surviving human’s ships are battle droids that you control through 12 levels of snappy, fast paced, platform based combat.

The best way I can describe this game is a cross-breed between TowerFall and Enter The Gungeon. Each stage is a single screen in size which doesn’t scroll, as such the sprites are all quite small to compensate. The contents, enemies and item drops are all randomly generated so each run is completely unique (Spelunky, Isaac, Downwell, you know the trend).

When you load the game for the first time very few weapons, items and enemy types are unlocked, as a result your first few runs will help you get to grips with the basics. Every time you encounter something new the game will temporarily suspend the action and a pop up will explain what each piece of apparatus does, negating the need for a separate tutorial. As you complete stages new guns, power ups and aliens are added to the game pool, as such experienced players will have a much more varied experience than a beginner would. The game naturally becomes deeper as the player gets better and encourages you to experience multiple playthroughs.

Droids can hold one each of the following item types. A primary weapon (all of which have a limited ammo count), a sidearm (which has unlimited use), an explosive (again, with limited ammo), a special ability, a defense move and a perk. These items can be acquired from vending machines and crates. When you first start playing your droid enters the game naked so you have to grab as much gear as quickly as you can in order to defend yourself from enemy attacks. However, after a few runs you’ll start unlocking options for starter items, so you’ll be able to begin your run with a preferred item to give you a little head start. 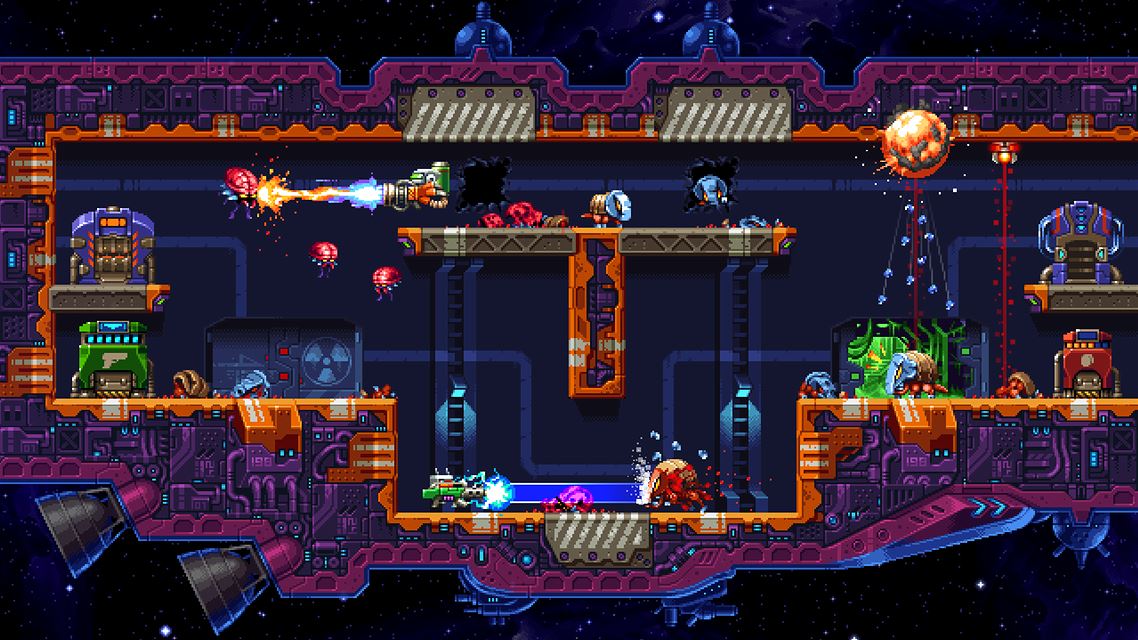 Included amongst the pickups are a range of assault weapons (with various properties such as different rates of fire, recoil speed, explosive ammo etc.), grenades, dash moves, dodge moves, double jumps, hand guns, projectiles, and these are just some of the early items. A couple of my favorites are the mini gun which takes a bit of time to warm up but makes mince meat of bosses, and the pogo shotgun which is highly explosive and tremendous fun to use.

The aliens that attack you come in various shapes and sizes, some being ground based and others being flying types. Their AI is pretty bog standard, as such they shouldn’t be too much of a threat providing you don’t let too many spawn at once, otherwise it’s very easy to get overwhelmed. It’s often a good idea to take note of some of their unique abilities such as the creatures who leave small pools of hazardous blood each time you shoot them. Since new enemies are introduced periodically you should have enough time to become accustomed to each encounter before taking on new ones.

Stages are also varied in their win conditions. The most straight forward types are the combat stages which simply involve killing enough of the spawning aliens before you teleport to the next stage. However there are also stages with objectives such as carrying batteries from one area of the map to another in order to enter warp speed or emptying the pressure from canisters before they explode. Every fourth stage is a boss stage where enemies will constantly spawn until the boss alien has been defeated. Once it has you need to clear all other enemies from the room before you can proceed forward.

One interesting mechanic is the vending machines that distribute guns, explosives and health (which is the only machine with a limited stock). Every time you collect a random item the vending machine will need a little time to recharge before you can use it again. As such you may find yourself in a situation where you’re stuck with items that may not necessarily be your favorites, but you’ll have to make the best of it until you’re allowed to make another withdrawal. What I love about this system is that the turnover of random weapons is so high that you need to keep adapting your play style which really helps keep the pace of the game up. 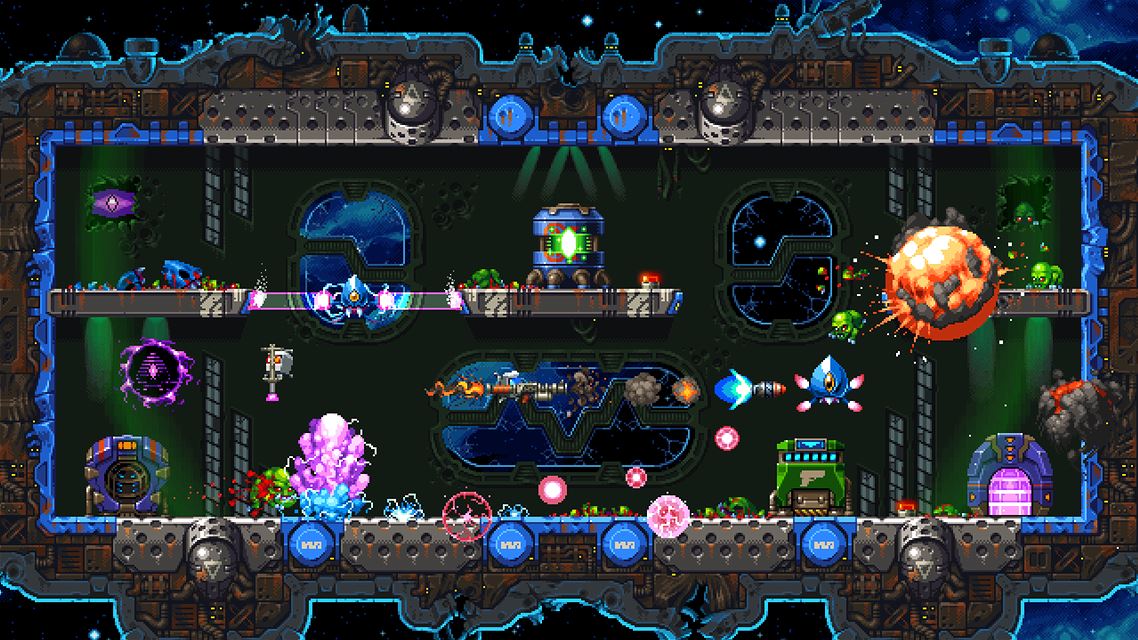 There are two modes available, a single run game or the endless mode. A full run of twelve levels should last in the region of around 10 – 15 minutes depending on how good you are. If this isn’t enough you have the option of the endless mode where the game repeats until your health runs out. You can adjust the difficulty but only if you have managed to unlock the harder settings first. Both modes can be played in either single or two player co-op.

The presentation here is stunning. The graphics consist of 2D pixel art and the various colour pallets complement each other in a way that really helps this game stand out. I’m really not a fan of dub step, but the music in this title is the perfect driving tool to get you pumped on your alien busting journey. There are certain scenarios where musical cues are used to great effect such as the high energy burst that happens immediately after exiting hyper space which causes the aliens to mutate and become stronger.

Since there are a lot of items that your droid can take advantage of this game enables the use of several different face and trigger buttons. I wasn’t overly happy with the default control scheme as the guns were configured to the R trigger, which I don’t really like unless I’m playing a game where I’m using both analogue sticks. Fortunately I could remap all the controls in the option screen.

As much as I enjoy Super Mutant Alien Assault I actually found it quiet challenging. I’m definitely going to stick at it and try to unlock the harder settings as I just enjoy this game so much. It may not be a top-tier affair but I still had a hell of a lot of fun playing it. It was an extremely pleasant surprise. Had I known about this game and not already received a review copy I definitely would have bought it for myself and have recommended it to a couple of friends.