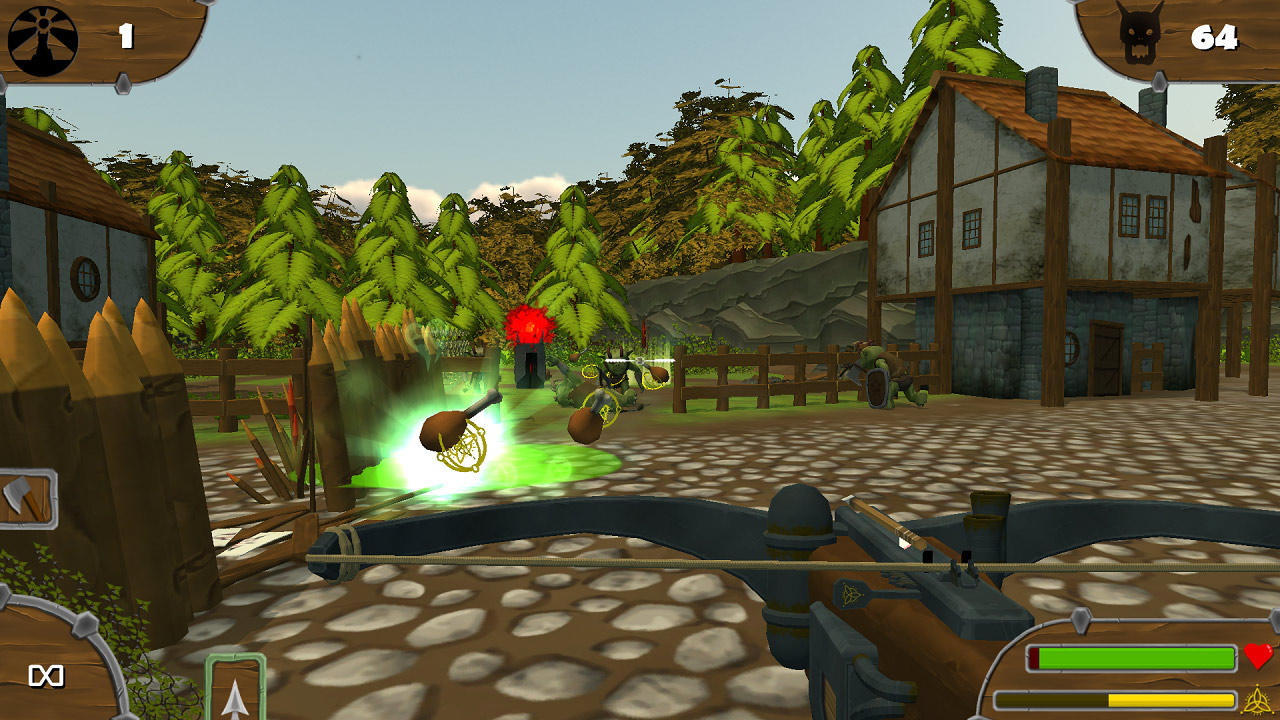 Have you ever played a mediocre N64 game on a barley functional emulator? Then you’ll have some idea of my recent experience with ‘Orc Slayer’, a medieval first person shooter which has recently been released on the PS4.

You play as a cross bow wielding hero whose mission is to rid his village of the orcs that inhabit it. The game is split into 13 linear levels which mainly take place across the luscious green village, apart from the last few stages which take place in a castle and a swamp. Each level will contain a number of columns that act as spawn points for orcs, and a stone archway that acts as an exit. In order to lower the force field which blocks the exit you need to destroy all of the monsters that spawn around each column, rendering the column inactive.

You begin the game armed with a crossbow which has unlimited ammo, however you can pick up guns that have a better rate of fire or melee weapons such as axes and swords. Melee weapons are next to useless in combat since orcs can cause damage simply by standing too close to you, but they can also be used for smashing breakable barriers. In addition, you can also find alternative arrow powers for your bow such as flaming arrows or lighting ones which deal more damage.

Killing orcs will cause them to drop coins which you can collect and use to purchase upgrades like better defense attributes, a faster cross bow, sharper arrows, etc. Orcs fight in large packs but they are slow and incredibly stupid. The enemy AI tends to be pretty bad and it’s not uncommon to find an orc running on the spot, starring at you but unable to get any closer as if there’s an invisible barrier in front of them. Orcs are set to spawn at certain points on the map when the player reaches a specific trigger point. As such the battles have been designed so enemies usually spawn behind you as well as in front. Despite the low enemy AI it is important not to allow yourself to become surrounded. I recommend trying to find a safe corner to back yourself into and then keep firing outwards to avoid getting ambushed. 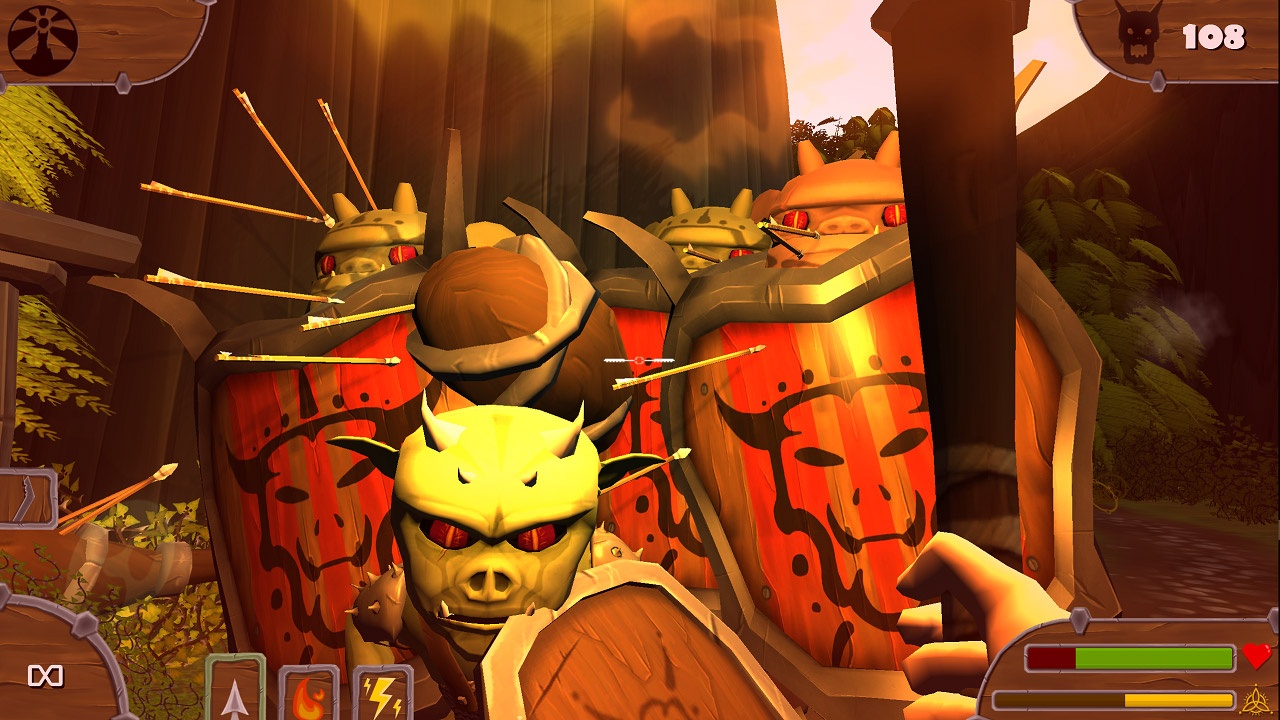 Orcs are the most common enemy in this game, however there are a few addition monsters thrown into the mix. A couple of examples include Tanks which are essentially giant versions of orcs that take several hits to floor, and wizards who project spells that have detrimental effects such as temporarily reversing your controls. In any situation I would recommend taking out the wizards first as they can be the most disruptive element to a battle.

In short, this is a very basic FPS which looks and plays like a fifth generation console game. It actually made me a little bit nostalgic for the original South Park game on the N64. The gameplay is repetitive and incredibly boring throughout. For me, the only part of this game that I would describe as salvageable is the graphics in the village stages. The villages are actually quite pleasant to look at. The textures are bright and cartoon like and would be a lovely setting for a children’s game or some sort of RPG. It’s such a shame that the terrain is often spoiled by the barley animated dull monsters that litter the scene.

Being boring and repetitive is actually the least of this titles sins as it is riddled with technical problems. Some of the more minor gripes would be the awful hit detection. There were times when I had a visibly clear shot but despite pumping dozens of arrows into the enemy’s head none of the hits would register because there was a tree somewhere way off to the left which was absorbing all the ammo.

There were also a couple of occasions where I had to restart the level I was on because of a bug that caused some of the enemies to become invulnerable, despite me pummeling them with hundreds of arrows. These were not big enemies like tanks, these were just the standard orcs that normally take one or two shots at most to defeat. 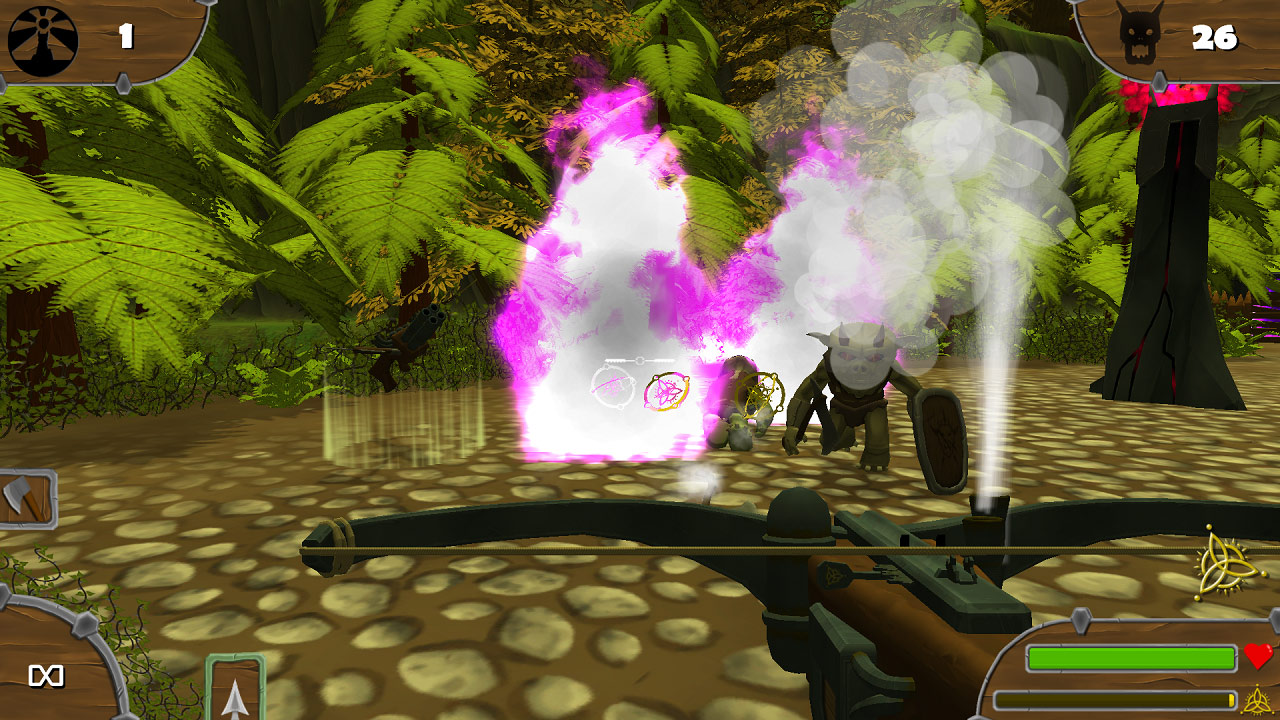 Despite all of this, the biggest problem this game has and the absolute deal breaker for me are the issues surrounding the frame rate and slow down. The frame rate is inconsistent throughout. It begins low when everything is calm and then tanks to near unplayable levels during the action. It was so bad during one ambush that it became impossible for me to aim and frankly I’m amazed that the game didn’t crash entirely.

When I began playing I set the difficultly to Normal (There are three levels of difficulty, Easy being the default for some reason and Normal being the next level up) and I wasn’t able to beat more than a handful of stages due to the game’s slow down issues. It was only when I restarted the game on Easy that I was able to slog through to the end, and even then the performance was appalling.

I could rattle on all day about the various minor bugs and glitches I encountered on my play through, but the one thing that stands out by a mile is that this game clearly wasn’t optimized for the PS4. Nothing about this game should be challenging the PS4’s hardware to this extent so I’m clueless as to why this game performs as badly as it does. Overall I would say this is one to avoid.