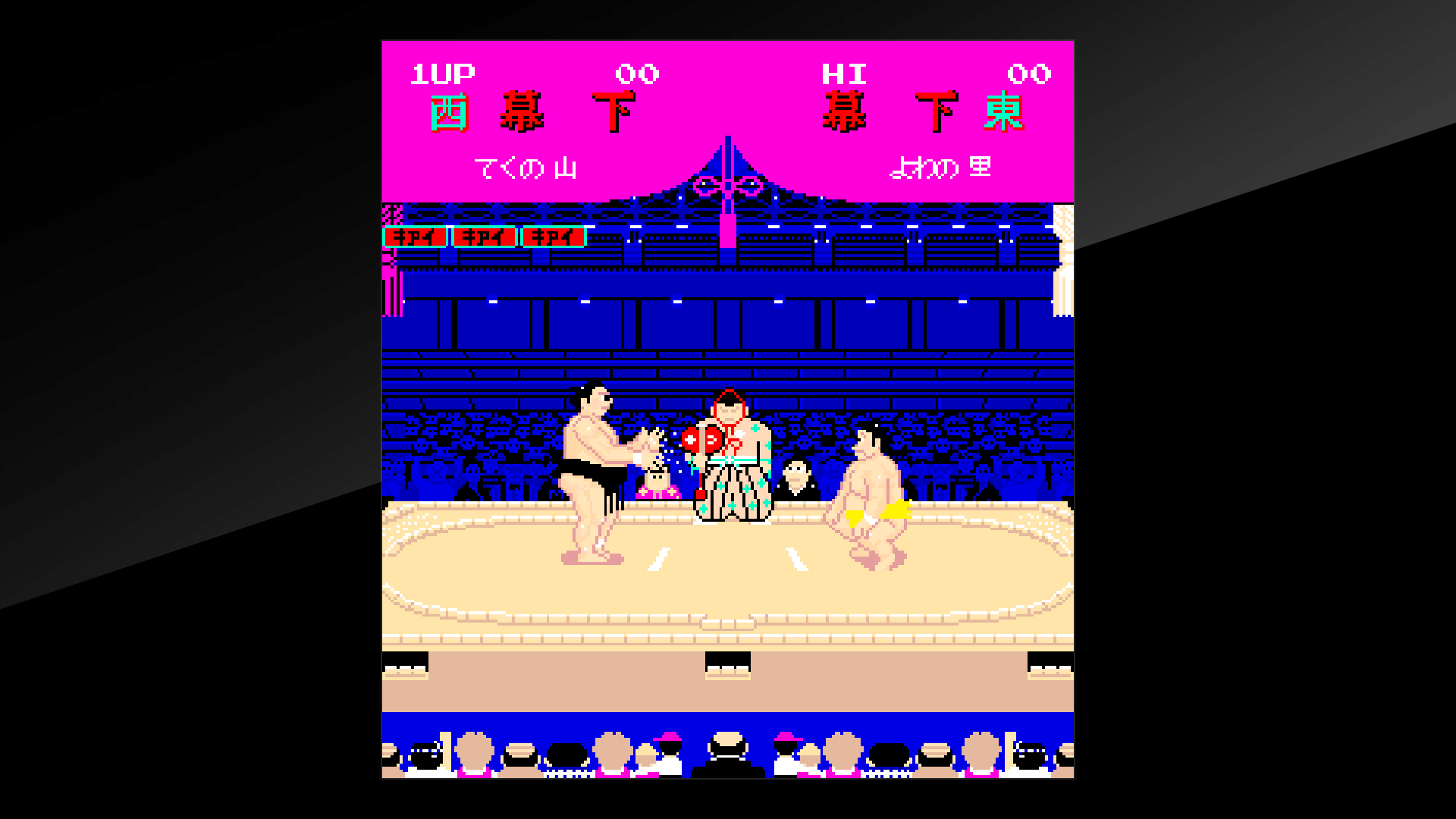 Sumo wrestling is a fairly niche sport outside of Japan, so it’s unsurprising that the European release of Shusse Ozumo for the PS4 comes a full 18 months after the Japanese version. In fact I wouldn’t have blamed Hamster Corporation, the publisher responsib
le for porting classic 1980s arcade titles to the PS4 under the Arcade Archives label, if they’d bypassed it completely. As it is European gamers will finally get the chance to play the original sumo wrestling video game.

Originally published by Technos in arcades back in 1984, Shusse Ozumo inspired a number of other developers to release sumo games on a variety of consoles over the following 20 years. Obviously it will look very dated to the current generation of gamers, but I actually feel it holds up better than most. The sumo character sprites are relatively large and well animated, with some particularly amusing expressions. Sound-wise things are more disappointing however, being limited to some basic bleeps and an occasional yelp. 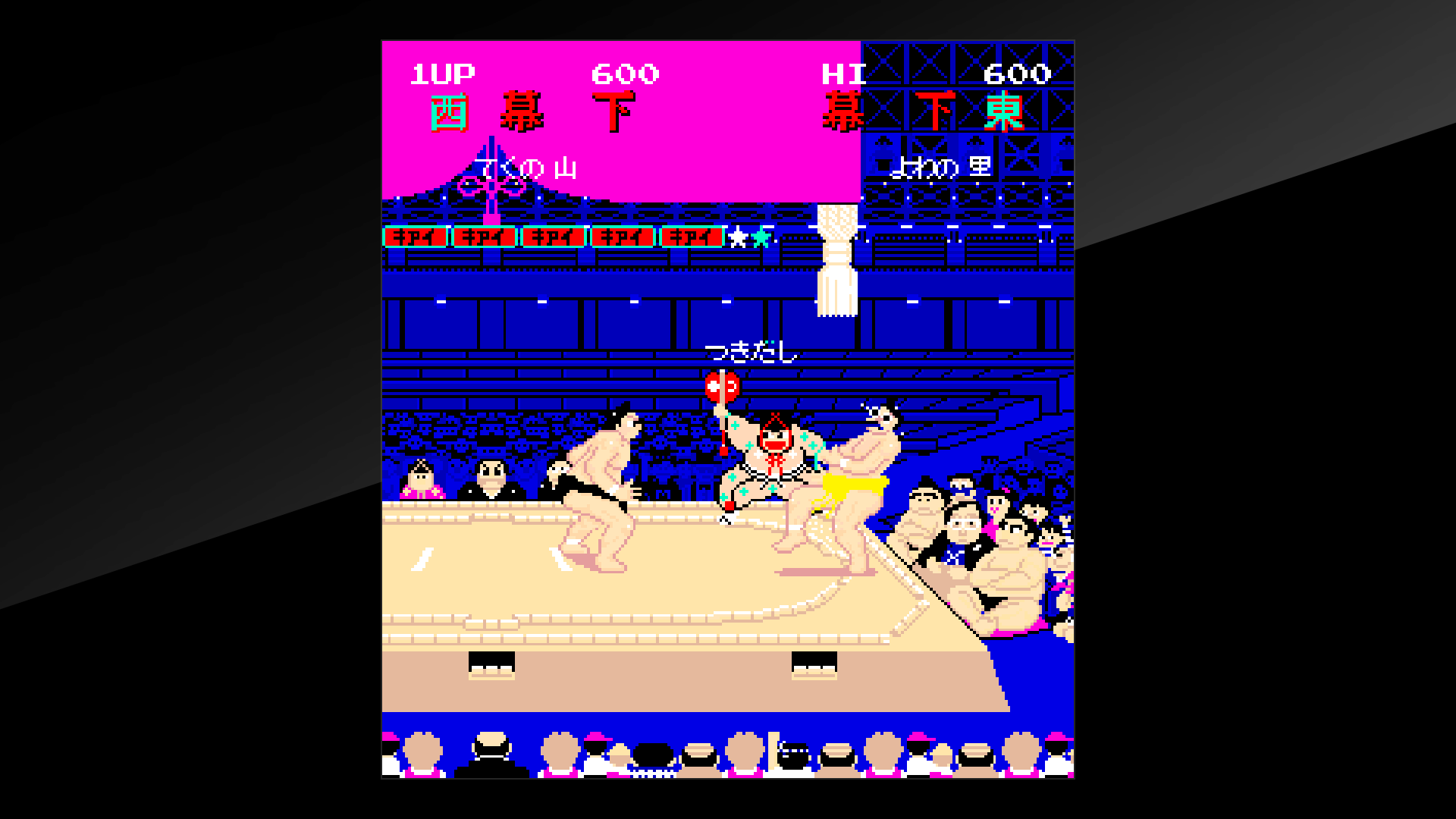 Another legacy of older games is the way you get thrown into the gameplay without much introduction. That’s definitely the case with Shusse Ozumo, particularly as much of the on-screen text is still in the original Japanese. It actually took me a while to even realise how to start a fight, and even then I had to pause and access the game manual after my first few bouts ended in confusing losses. Luckily the well-translated manual cleared things up (and reading it also earned me a trophy) and I was able to actually resume with a clearer understanding of the controls and what I was supposed to be doing.

The side-on perspective might make Shusse Ozumo look like a traditional beat ’em, but a noticeable difference from Street Fighter and it’s ilk are the lack of health bars. As with real-life sumo wrestling, victory is achieved by either forcing your opponent from the dohyō (ring) or by knocking them to the floor. Pressing the circle button along with a direction results in a slap or a push to knock your opponents back, while the directional buttons by themselves can be used to throw your opponents. Getting up close meanwhile allows you to grapple, and triggers a button-mashing contest as both wrestlers attempt to fill respective bars (a spirit gauge for the attacker and an endurance gauge for the defender). This is actually fairly entertaining, as the defender frantically attempts to break out of the grapple while if the attacker wins he can lift/throw/push his opponent depending on the direction pressed. 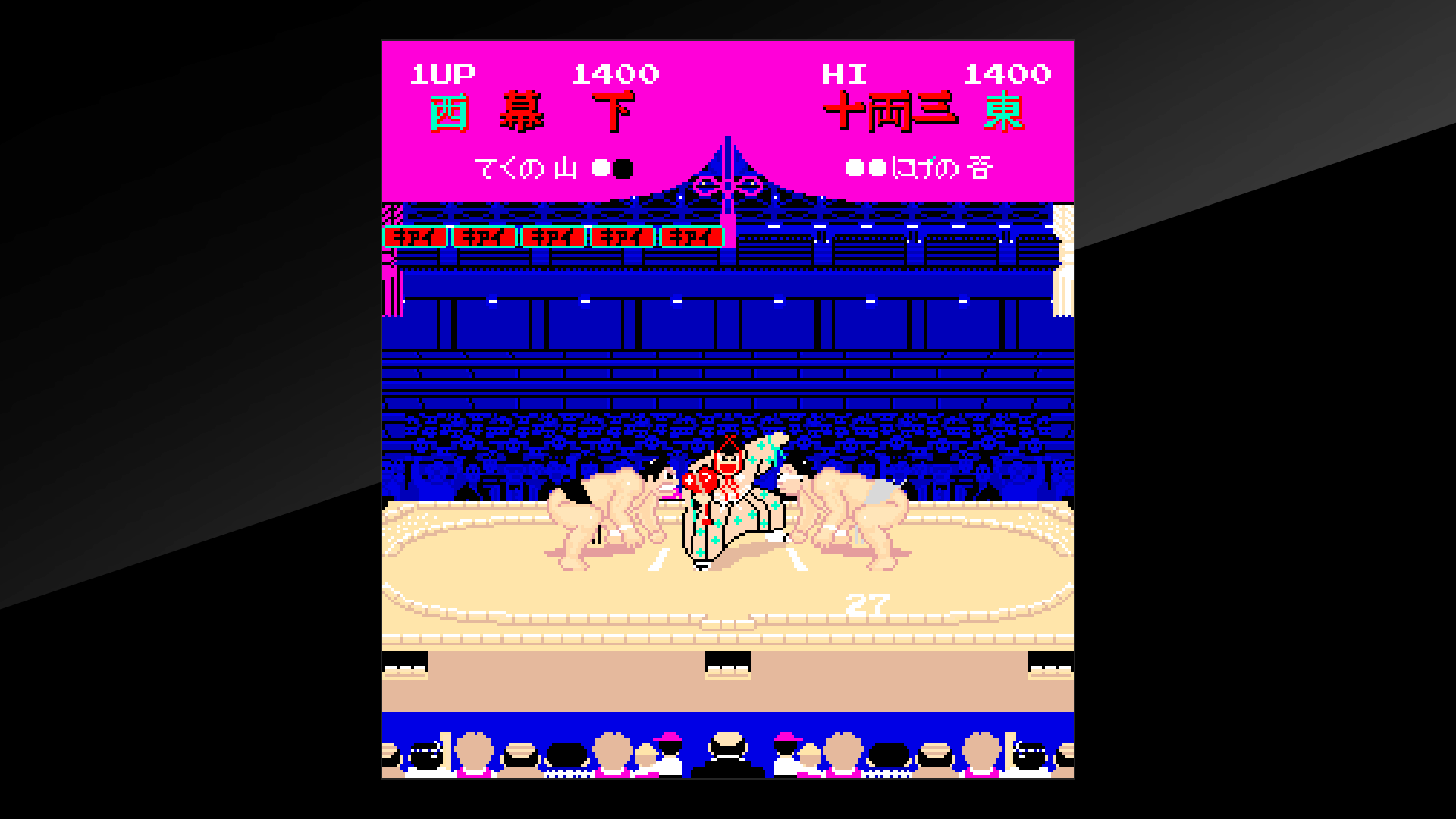 Obviously with the limited move set and controls there’s not a great deal of ability required, and Shusse Ozumo is unlikely to hold your attention for long. Luckily the bouts often only last a few seconds and then you’re onto the next fight, but even then there isn’t really much incentive to keep on playing. Ultimately your aim is to keep winning until you reach the rank of  yokozuna – and then keep winning to defend your title – but I can’t see anyone but die-hard sumo fans sticking with it that long. Checking the online rankings however does show there are quite a few players prepared to earn those high scores (you can’t actually compete online), although as expected 99 out of the top 100 are Japanese players.

Shusse Ozumo is moderately entertaining in small doses, and probably slightly more enjoyable with two players (much as I imagine the original arcade game to be). If it was part of a larger collection of games bundled together it might be worth a purchase – but otherwise it will only be of interest to genuine sumo fans or video game hipsters looking for a novelty title to indulge in. Trophy hunters may also feel compelled to seek it out too once they realise all nine trophies are unlocked simply by selecting menu options, and can all be earned within 30 seconds of starting the game.