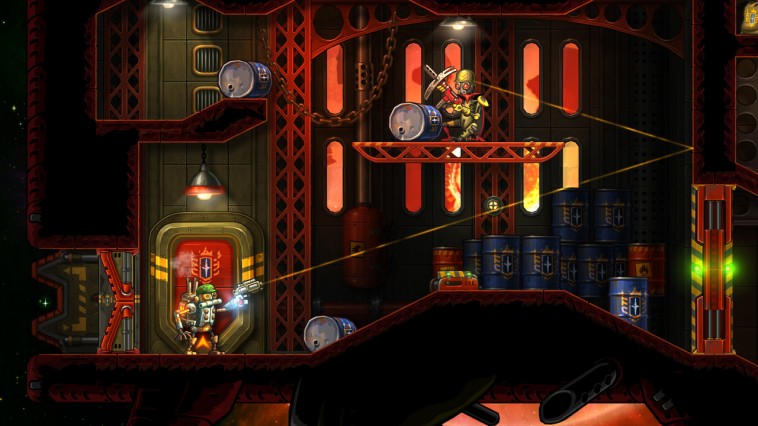 Originally a Nintendo 3DS release from last year, SteamWorld Heist has since been adapted for most current gen platforms out there – most recently on the Wii U. If you have seen it another platforms, then this version of the 2D turn-based strategy shooter, from the already established SteamWorld series, probably isn’t going to add anything new. For those who may have missed it the first time around – you might be surprised at just how good it is.

You are introduced to the world by a 1920 style newscast, who explains that the earth has exploded and all its steam-powered inhabitants are forced into space to farm whatever moisture they can to survive. You control Captain Piper and her group of space pirates as they travel the galaxy, boarding ships and plundering whatever supplies they can.  Along the way, you come up against the scrappers; a group of villainous bots cobbled together from old spare parts, the oppressive diesel-powered royalist forces, and another ‘unknown threat’, later in the game, but which I’m ensured from the intro is of  ‘great danger’. The whole game oozes character from the start but don’t be fooled, underneath those charming 2D character models lies a surprisingly deep squad based strategy shooter with a twist. 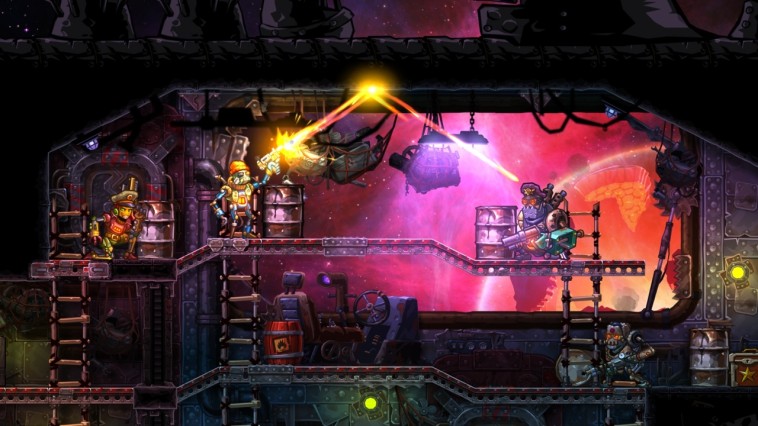 Like other games of the genre, you position your squad, preferably behind some sort of cover, and attack. Movement is done by navigating a marker on-screen and confirming, but rather than the usual attacking method of just ordering your guy to fire and hoping for the best, SteamWorld Heist adopts a different approach. Shots are aimed manually. Not only does this eliminate the random chance element other games of the genre prefer to use when it comes to assigning damage, it also allows you to ricochet your attacks off the walls and floors. While this doesn’t negate the point of taking cover entirely, it allows you to line up some sweet head shots on dug-in foes that would otherwise be impossible.

And its a blast. Ricocheting all six pellets of a shotgun off the ceiling and destroying a group of enemy robots not only takes a certain amount of skill, it looks and feels incredibly satisfying. And despite its cute look, the tactical depth is there. Each character you acquire belongs to a class, and will earn abilities as they level up. They can use one of 2 weapon types, and can equip an additional 2 items to use in battle, all of which can be either bought or found in loot dotted around the levels. It doesn’t sound like a lot of slots for customisation in a tactical turn based shooter, but the abilities the additional kit poses, such as extra movement, defence or attacks, allow your specialist crew to take on a variety of roles. 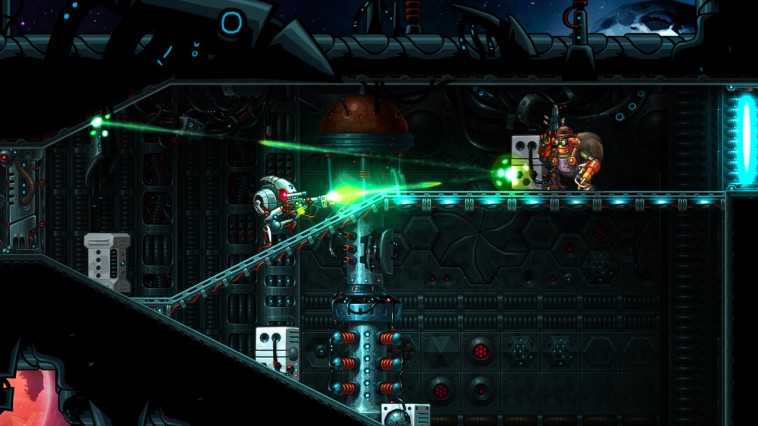 The game itself is crafted beautifully. As with the previous SteamWorld games, Swedish developer Image & Design have managed to build a unique steam-powered universe, and the 2D visual style fits right at home on the Nintendo systems. The soundtrack has been custom-made for the game by the band Steam Powered Giraffe, (who make an appearance in the game’s saloons and bars), and the rest of the sound design fits the wild west space theme nicely. It’s also just challenging enough. I never felt like I failed a mission due to overpowered enemies or poor spawning, it was always down to my own tactical mistakes. The items and equipment were randomly accrued from rare loot drops, and apart from the bosses and such, ships you board for missions are randomly generated, so revisiting a level for loot and experience not only allowed me to power up my team evenly, but didn’t feel repetitive. New game + is also unlocked on completion of the game, so those wanting to continue blasting their way through the galaxy with their level 10 super squad can if they wish, and higher difficulties will mean more enemy reinforcements and skill.

Overall, SteamWorld Heist is a fantastic game that I would recommend on any platform you prefer it on. If you are looking for an alternative to serious affairs like X:COM, or enjoy Worms and fancy a similar but more tactical single player experience then definitely give it a look.  Its been out for a while already, but the price tag seems fair for such a solid and unique game and there is DLC available for those who want extra missions and items.