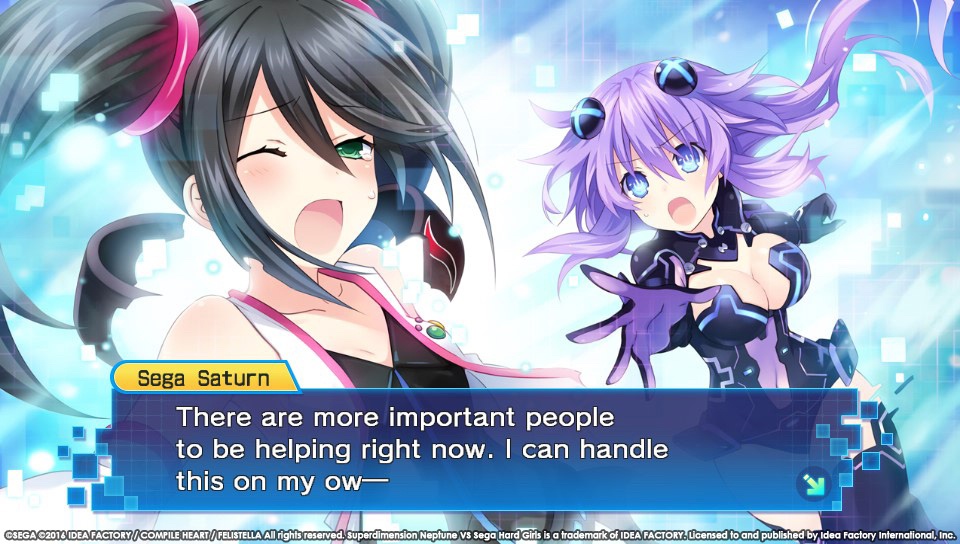 Ok, so this might be a tough sell for the mainstream; a crossover between a niche Japanese RPG that parodies the video game industry and a little known (in the West at least), animated show based on the concept of anthropomorphised Sega consoles who must graduate from Sehagaga Academy by venturing into the worlds of various Sega games and earning medals. Yeah, it’s not exactly FIFA 17 is it.

So, an extremely niche crossover released exclusively on the increasingly niche PlayStation Vita. So, a perfect fit then? Well, yes actually. Beyond the miracle that this ever made it to the Western market, the unsurprisingly bonkers, Superdimension Neptune vs Sega Hard Girls really is a perfect match for the Vita and its notoriously hardcore fanbase. Similar in vein to the umpteen Hyperdimension Neptunia games released in recent years, Superdimension’s more freeform battle system and emphasis on specific Sega console eras arguably makes this the most accessible release in the series’ history, and despite issues with the repetitive nature of the quest system, arguably the most enjoyable one too.

Despite the incredibly high concept premise, this crossover represents the most mature entry in the series to date. Built around protagonists IF and the brilliantly named, Hatsumi Sega, the narrative centres around the books of history disappearing at the Grand Library and thus, history itself being wiped out of existence. The story, while surprisingly well told, is still home to the sense of fun that the series is famous for while doing a great job of incorporating the Sega Hard Girls and making the history of Sega an integral part of the plot.

Setting out from the Grand Library (used as the central hub for picking quests etc), you can head towards any of the four worlds available in any order that you see fit. Whether it be the Sega Saturn themed world, the industrial Game Gear era, the modern Dreamcast iteration or the classically themed Mega Drive era (that’s the Genesis world for all you US readers), a relatively forgiving difficulty level ensures that you can safely choose any route that you wish without fear of some unassailable difficulty spike set just beyond the horizon. Yes, the boss battles are very tough, but they are tough across the board and thus don’t effect the structure of the game. The need for extensive grinding ahead of boss battles does go against the flow of the rest of the game, but beyond these decidedly unforgiving encounters, Compile Heart have done a great job of balancing the game by delivering a challenge perfectly in line with the games’ tone. 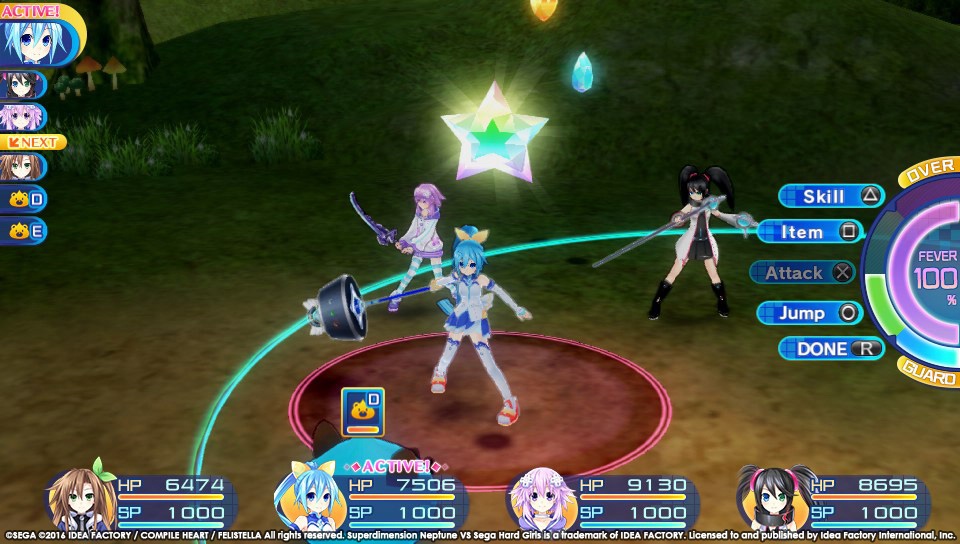 As a massive Sega fan, it’s a bit of a shame that the Master System doesn’t get its own world (I would have personally taken a Master System world at the expense of the Game Gear era), but to pick holes for what is, let’s be honest, a rather understandable omission, seems a tad churlish – especially given the otherwise exceptional levels of fan service. No game has celebrated Sega’s history in this way since the little played Japanese Dreamcast exclusive, Segagaga. To get a game that covers some of my favourite consoles of all time (the Dreamcast being my particular favourite), is as unlikely as it is brilliant, and while not everyone will share in my love of Sega, the game beneath is good enough to make this a viable option for just about anyone with an interest in the industry (something you will almost certainly have if you’re still playing your Vita at this point).

The aforementioned quest system can get repetitive, especially when some of the core quests are little more than a selection of dialogue scenes followed by the need to return to the Grand Library for completion (despite not having actually done anything). Again, the set-up does allow for a more freeform approach to the game and the ability to take on the story in any order you see fit is certainly a welcome one, but there are points in the 20+ hour adventure in which you’ll begrudge the repetitious trip required for quest completion.

Still, that minor bummer aside, just bout everything else represents an upgrade over previous Hyperdimension releases. The worlds are all brilliantly unique with visuals that belie the Vita’s ageing hardware. It’s not quite 1st party gorgeous and there are some annoying frame-rate drops when things get especially lively, but this is still a technically impressive and artistically exciting release. The dungeons can be a tad bland at times, but for the most part, Superdimension Neptune vs Sega Hard Girls and its brilliant cel-shaded visuals represents one of the better looking games available on the Vita.

It helps of course that the dungeons are more interactive than ever before and that the battle system, while far from ground breaking, is consistently enjoyable and relatively fast-paced. With the ability to climb, jump and squeeze between cracks in walls, the dungeons feel less sterile than they have in previous releases and are subsequently more enjoyable to traverse with more to do than simply engage in battle after battle. 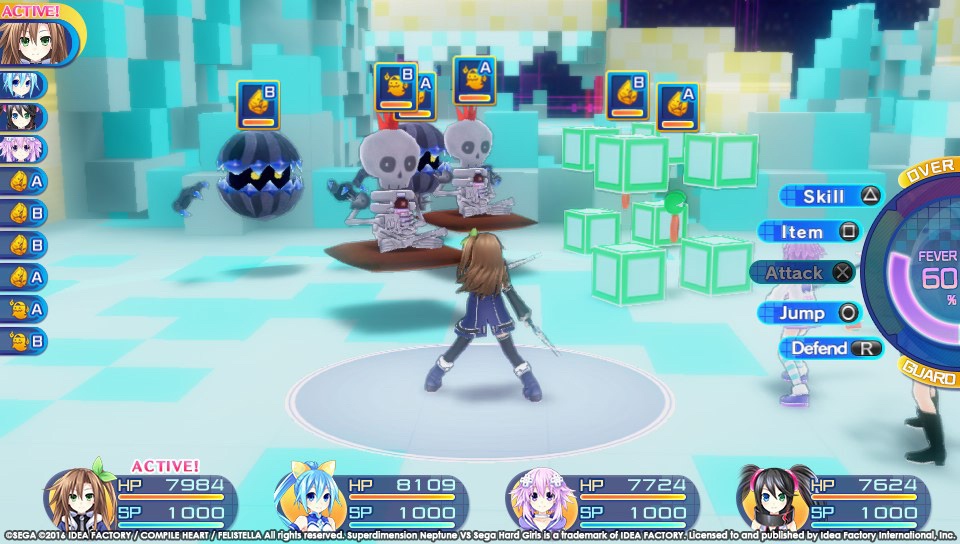 Saying that, it’s not like engaging in battles is anything other than fun. With a combination of turn-based and real-time combat, Superdimension Neptune vs Sega Hard Girls provides plenty of freedom while managing to deliver a fast-paced but no less tactical battle system. Rather than setting up combos, you now have an Action Gauge that allows you to put together multiple attacks on numerous enemies in a single go. On top of this, there are the Overdrive, Gem and Fever Time abilities that add the kind of tactical depth needed to keep the otherwise simplistic battle system entertaining and engaging for the duration of the adventure.

The Overdrive system gives you the ability to charge attacks, the gem system allows for randomly acquired boosts and upgrades during battle, while the Fever Time system can provide you with additional turns and access to unique EXE skills. None of these abilities are individually revolutionary, but they do combine with the core mechanics to create a compelling and addictive battle system.

As a huge Sega fan, it’s hard not to be won over by the fan service and clear love of all things Sega, but even without the unique premise, this brilliant crossover represents the finest game in the series to date and a fantastically fun JRPG in its own right. The quest system can get a tad repetitive and there are technical issues with the frame rate, but despite these minor problems, this is another fine addition to the PlayStation Vita’s increasingly fantastic library of JRPGs.