PlayStation VR Worlds is a very well presented introduction to the world of Playstation VR, created by game designers from the ashes of Team Soho who have been at the forefront of interaction games since the 2003 with Eyetoy, the Wonderbook series, Playroom and now VR WORLDS. 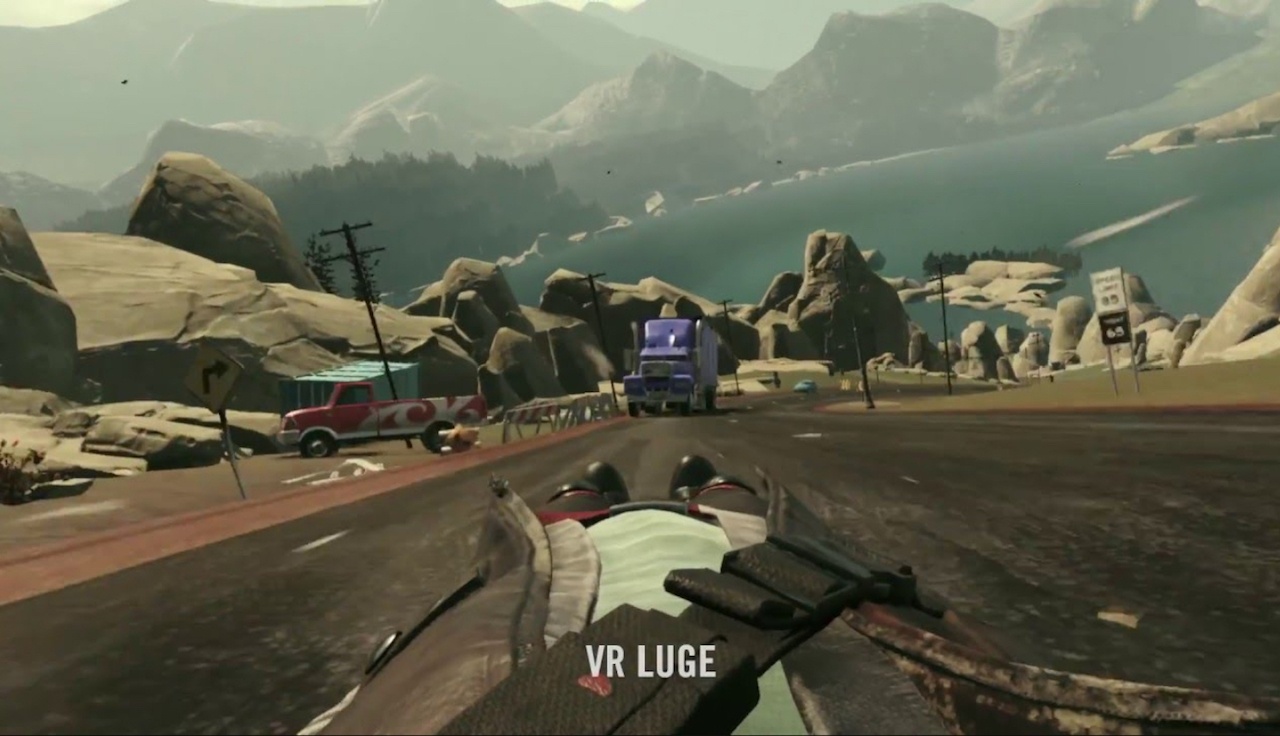 VR Luge – For me is the worst of the five on offer, it’s certainly not a bad game just not great, it’s very limited in its approach and replay value, you find yourself laying on what can only be described as a skate board hurtling down roads at speeds reaching 100+ MPH (obviously dependent on your skill level) avoiding all manner of obstacles including cars, trucks, road works (this game could have been set on the M6). To do this you are required to tilt your head in the direction you want the board to go, easy enough but you find yourself already out of the VR experience as your character is laying down and you are sitting up, I did try laying down to get the full effect but all I got was a neck muscle the size of Arnold Schwarzenegger’s thigh, also it only has a small selection of maps, some are just replayed at night, and to the motion sickness sufferers out there this could be the one that will get you bringing up your microwave pasta dish all over your posh rug, overall it’s not a bad game just compared to the rest of the bundle in my opinion it’s the weakest link. 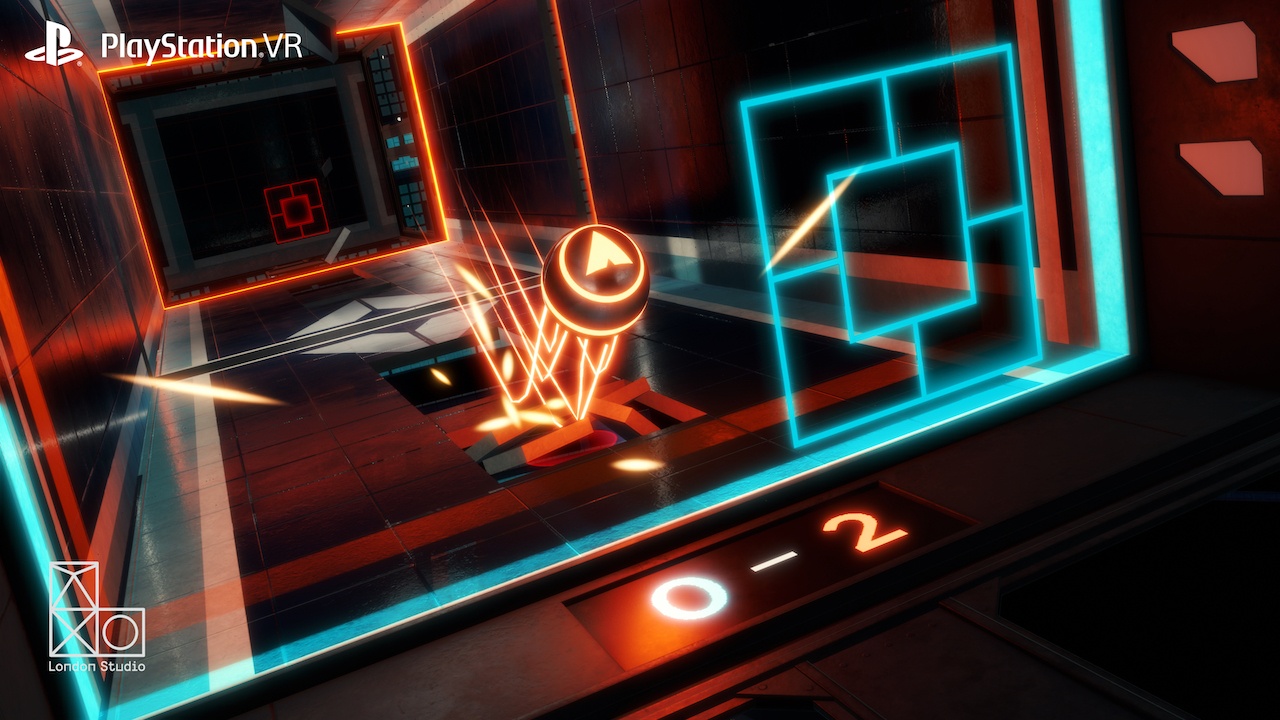 Danger Ball – Involves no more than moving your head in the required direction to hit a ball back to your opponent in colourful corridors of light, however the skill here is to hit it back at some kind of weird angle causing the ball to fly and bounce all over the place completely confusing your opponent of its direction, think of this as the love child of Pong and Air Hockey and you not far off, it’s fast, colourful and the level progression is challenging (especially after 20 minutes of nodding your head back and forwards, side to side) but overall it’s fun to play. 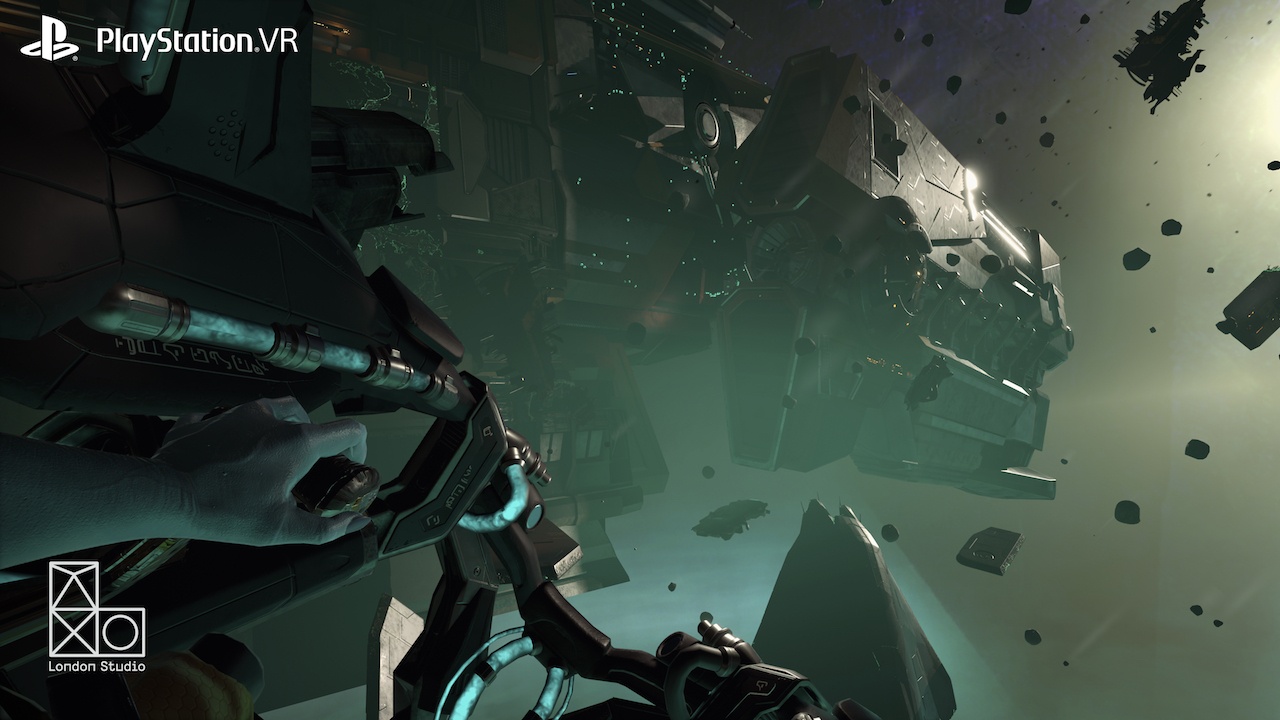 Scavengers Odyssey – Personally I really enjoyed this one and only have one misgiving, you play an alien strapped into a sort of Mech spider searching for an item only described as the ARTIFACT, this has full 360 degree movement and involves jumping (or space hopping) over various floating terrain while being bombarded by space debris, alien bugs, and in the latter chapters(only 6) rockets and bug slime .I realise this probably isn’t selling the game to well but it’s actually quite a good (but short) story, the 3D audio is impressive and graphically very pretty in places which brings me to my only real issue, the interior cockpit is impressively detailed, watching alien blood pump through your veins, and your three finger hands moving in sync with your thumb sticks is great but for me I found the exterior a little blurry and certainly nowhere near 1080p or even 720p, in fact almost VHS quality which sometimes and very abruptly reminded you you’re at home, on your sofa and playing a game, this could be just my aging mince pies telling me to put the VR down and play normally but the thought of jumping through space in a spider Mech suit with full 360 degree movement while using your eye tracking to aim is too much of a pull, I’ve played this 3 times now and will be going back in again soon and have at no point experienced any illness, dizziness or unwanted side effects like some gamer reviews I have read recently but VR isn’t for everyone, but lucky it’s for me. 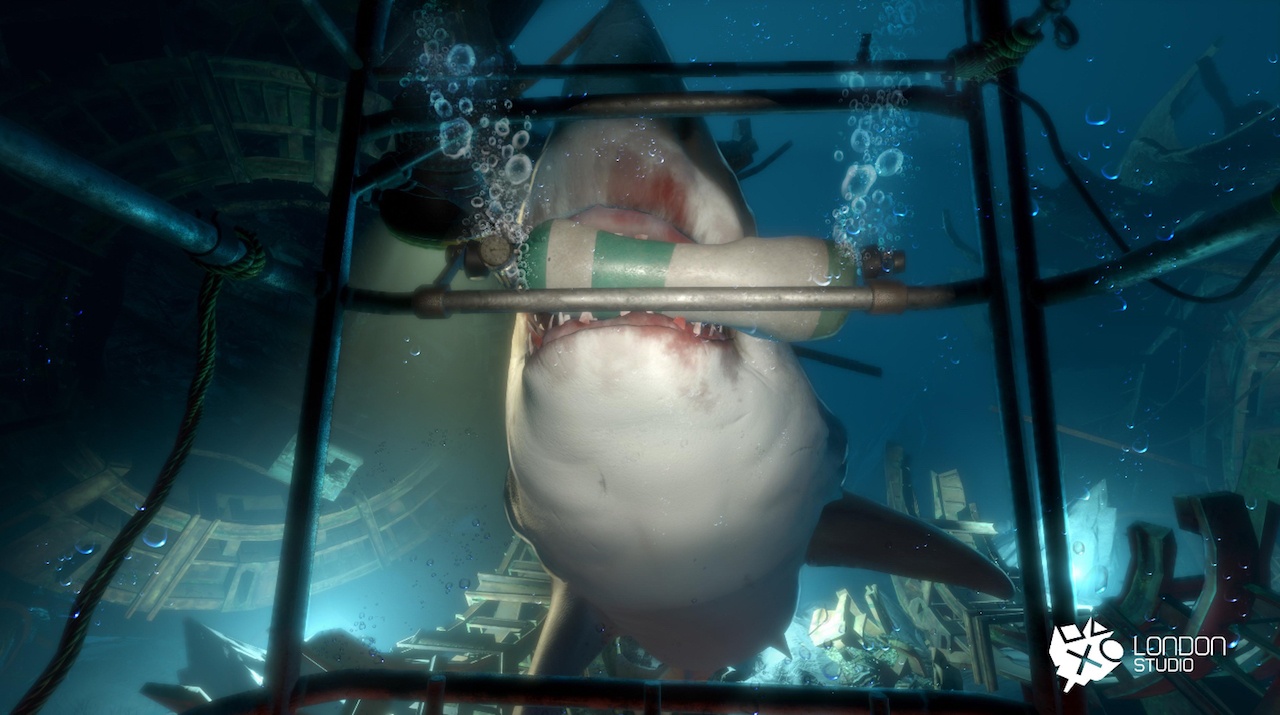 Ocean Descent – Is a must VR experience but sadly with only 3 short dives to entertain you, a not so long one. There are two simple admire the beautiful sea life dives which will have you watching with open mouth as Manta rays glide pass you within touching distance, inquisitive sea turtles swim practically in the cage with you and plant life carries on around you while you descend into the depths of this magnificently realised ocean. But the dive we all want to play and the one that we have all seen on social media is Shark Encounter, this dive begins with a tranquil setting while you descend gracefully in your dive cage admiring all the sea has to offer, a brief power out highlights the beauty of jelly fish, firstly one, then hundreds all around, you can’t help but stand there and catch flies in your gawping mouth. An all but pointless story ark (unless London Studios have some DLC on the way) steps in as you watch Mini subs remove items from a radioactive Submarine until you see that famous silhouette in the distance, you can hear John Williams theme playing through the headphones even though it’s not on the game’s soundtrack, it draws closer inspecting its next possible meal. The animation is sublime, the shark rendered perfectly as it circles you, causing you to gulp and frantically search for its possible path, once it decides to attack you can’t help but try to grab the cage to steady yourself, you can’t help but jump back to avoid the row of laser sharp teeth, you can’t help but think of how poor HOOPER felt in Spielberg’s classic. This is truly terrifying and does a fantastic job to convince your mind you’re in that cage and you are being attacked by one of nature’s scariest creations – This is in my opinion a masterpiece in VR but as with all of VR Worlds experiences its over far too soon and with the Shark scripted a novelty one. 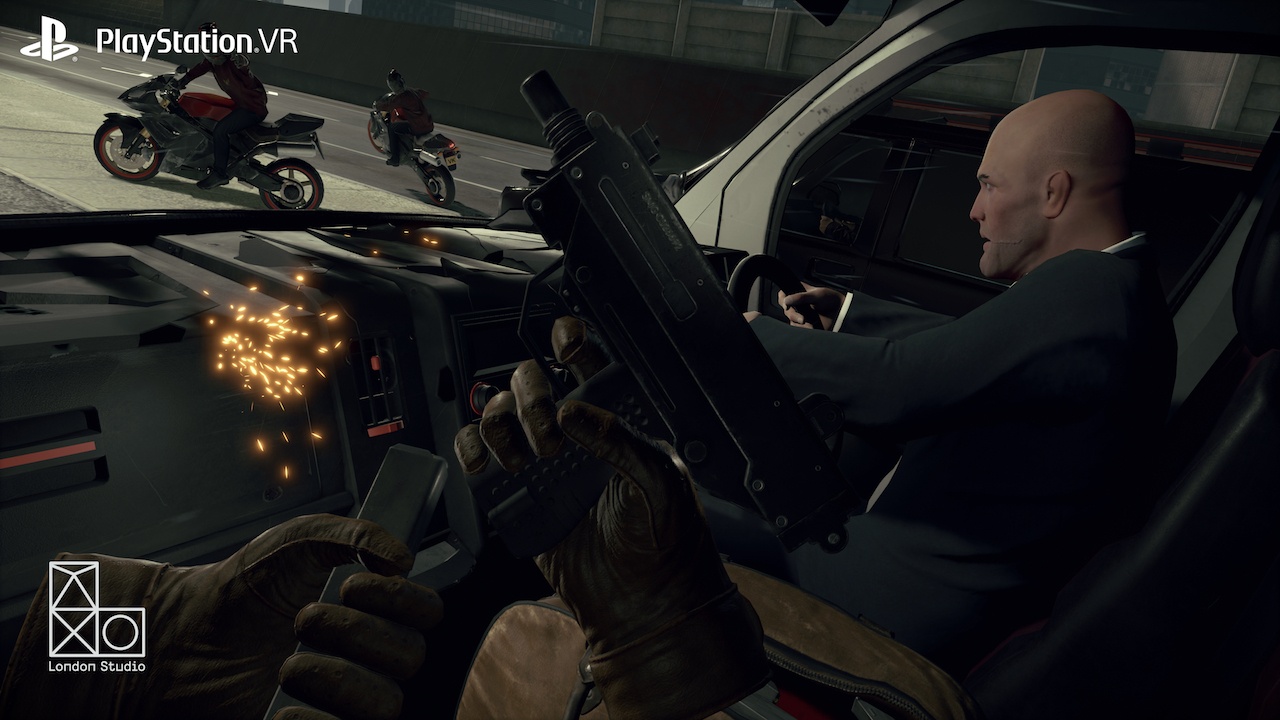 The London Heist – Think of watching, sorry participating in a short version of Guy Riches Snatch, or Lock Stock and you have London Heist down to a tee, playable with either the dualshock4 of motion controllers (the latter being the better choice) this one is definitely not for the younger ones of VR (Sony says 11+ but my 6-year-old has been playing Playroom VR with no side effects …. yet). With every other word being an expletive of some kind and quite clearly promoting smoking cigars, (you can actually inhale and when you breathe out thanks to the built-in mic, smoke appears as if being blown out of your mouth, sorry but I found little touches like this to be really cool) torture and gun fights basically means it’s for adults only. The game consists of two-gun fight sequences interlaced with a brutal traitor story line when you are asked to participate in a diamond theft which obviously goes wrong, the final gun fight that ensues in the van is the high point of the game and again this has been showed off constantly on social media so there are no surprises to ruin but I reiterate about the little touches, tuning the radio, switching the AC on, opening the door and looking behind you all play an essential part in making this my Best of the bunch on VR Worlds, yes the story’s brief, yes its full of stereotypical cockney gangsters (I’m a London boy by the way) and Yes its twitchy in places but if this is the future of FP gaming then sign me up, and if London Studios read this review please make this a full title or at least some episodic DLC.

As I very long in the tooth gamer who since switching his Atari2600 to the colour option has never looked back this really is a massive leap forward in gaming terms, I understand VR WORLDS won’t be to everyone’s taste especially if motion sickness is an issue but having five very different “from the ground up” VR experiences and for (at time of writing) £30, it’s a no brainer for Playstation VR owners out there.

I personally play games for the experience, not the trophies, not the banter of pubescent kids who think swearing is cool or even spending hours socialising with my friends during an epic battle on Battlefield, the experience, and that’s what VR is all about, locking yourself away from the world you know and entering a world you don’t. VR WORLDS isn’t a “one giant step for mankind” start to the world of console VR gaming but it a step in the right direction and I tip my hat to all involved at Sony’s London studios.