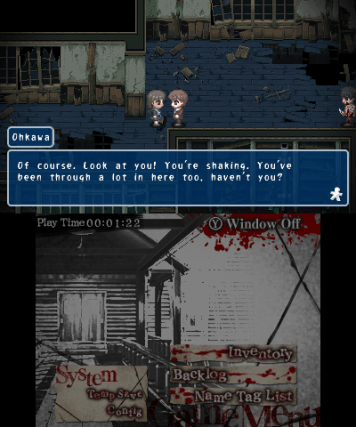 Just how scary can a game with 16-bit era visuals really be? It turns out that the answer is very. Very scary indeed. It might not be on quite the same level as the early Silent Hill games or the utterly brilliant and often nerve-shredding, Alien Isolation, but it really is amazing just how many scares developer, 5pb have managed to mine from its pixelated visuals and simplistic art design.

Well, I say that that, but the truth is, Corpse party doesn’t get its scares from its visuals at all. Quite the opposite in fact; like the best horror movies out there, Corpse Party is more about what you don’t see than what you do see. For the vast majority of the game, the true nature of your predicament is kept from you. This leads to a general sense of unease that permeates every moment of the experience. That overriding sense of unease is expertly married to the games’ exceptional soundtrack and brilliant use of sound effects. It is this use of sound rather than its use of stylised visuals that establish the scares by constantly putting you on the back foot and never allowing you to feel comfortable in your surroundings.

If anything, the visuals, thanks in part to Corpse Party’s origins as a RPG Maker project, are incredibly basic. Yes, the 16-bit inspired art design is old fashioned, but beyond that, you could argue that the locations and character design are actually more bland than technically limited. A lot of games that incorporate 16-bit art design are visually stunning – Corpse Party is anything but. It’s not that its visuals are offensively bad, they’re just, well, like I said – bland. 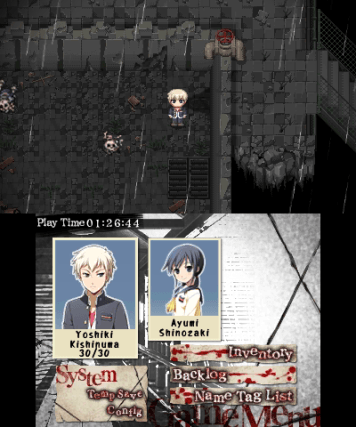 That’s fine though, as the visuals, while artistically limited, do enough to establish a sense of place while allowing for the great soundtrack, brilliant use of sound and fantastic script to do their work. This really is a masterclass in building up tension and delivery effective scares. Sure, the scares themselves are about as cliché as you can get. There is nothing here you haven’t seen in any number of J-horror titles from the last decade or so, but despite their familiarity, their effectiveness is rarely diminished.

While scares inevitable play a major role in the overall experience, what makes Corpse Party quite so memorable is its fantastic cast of characters. Stuck in an alternative dimension after a bizarre friendship spiritual goes horribly awry, a group of students and one young teacher find themselves transported to Heavenly Host Elementary, a school that had been destroyed years ago due to a spate of rather unpleasant murders (when are murders not unpleasant?). From here, it is down to you to help these students escape the school by solving a myriad of puzzles and, y’know, running away from things that go bump in the night (or bump in the super spooky alternate dimension anyway).

The reason for all this running is down to the fact that the game has no combat. The few times you encounter a foe, your only option is to run away. It’s a very simple mechanic, but it successfully plays into that concept of helplessness and of being completely out of your depth. Other than that, yeah, it’s just basic puzzles. Nothing is overtly obtuse, but as soon as you progress beyond the relatively lengthy opening, you are left to your own devices with no explanation of what to do next or how to do it. Again, there is nothing too taxing here, but it is refreshing to find a game with the confidence to let you get on with things. 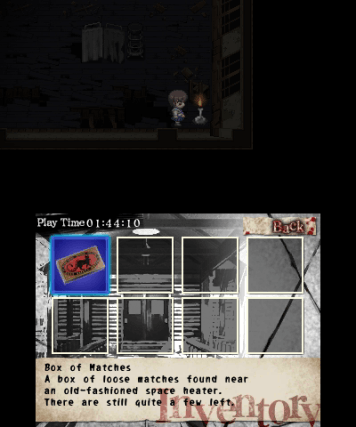 With all 10 chapters from the original 2011 PSP release and 4 all new 3DS exclusive chapters to get through, this really is the definitive version of what was an already brilliant game. It’s a shame that the PC exclusive stage wasn’t included, and rather bizarrely, the additional 4 chapters don’t have the voice work that is so integral to the core chapters, but despite these issues, Corpse Party remains as effective today as it was 5 years ago with the convenience of inventory management via the 3DS’ second screen arguably making the game better than ever.

The visuals might be a tad bland, but with its fantastic writing, brilliant use of sound and consistently exceptional soundtrack, Corpse Party remains one of the more effective horror games around and arguably the best on handheld systems. By making the game more about what you don’t see than what you do see, Corpse Party successfully establishes a sense of dread that is built upon throughout the entirety of the experience. Instead of trying to create an effective bogeyman in 16-bit sprites, 5pb encourage the player to create one in their imagination, and in my experience, there is nothing scarier than the monster one can create inside their own mind.