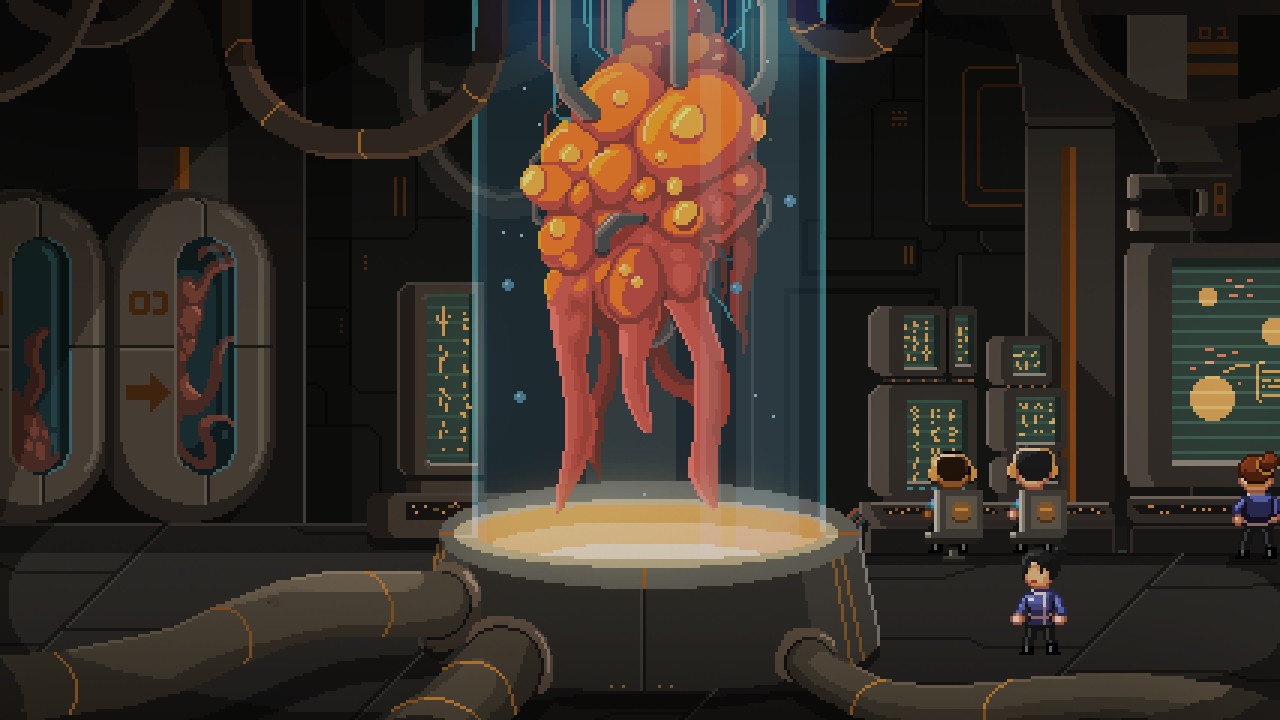 If you look at screenshots or videos with random pieces of gameplay you can clearly see what Halcyon 6: Starbase Commander is all about. The best way to describe it, without going into much detail, would be to say that it is a mixture of a bunch of different genres, culminating in a space strategic management game with a heavy focus on turn-based combat with some very light RPG elements thrown in there for good measure.

The game tutorial acts as a rather nice introductory sequence, teaching you the basics of the game and paving the way for the story to unfold. It starts by showing the 12th Fleets of the Terran Federation getting ambushed by some mysterious alien race called the Chruul. As a consequence of that you are left in charge of the Halcyon 6, an old abandoned space station which the Federation discovered and appropriated themselves of, thus changing the course of a war for galactic control between all races which had been going on for around 500 years. Following the loss of contact with the 12th Fleets, a series of portals start appearing in Federation space, spawning these living ships that start wreaking havoc throughout the galaxy and so, it is up to you to stop them.

That said, in terms of story the game doesn’t really focus that much on it, even though there’s certainly an attempt to provide an engaging narrative I wasn’t really drawn into it and preferred to go straight for the action. There’s little bits of story that are in the game are told via missions that kind of guide your progress and assure you are progressing well. For example, sometimes you might intercept transmissions from other factions and you’ll have to try and negotiate certain terms with them via this dialogue based choice system, which requires you to make key decisions. This includes choosing or not to side with a specific faction whose intentions you don’t really know, like taking care of pirates in exchange for resources or siding with one of said pirates in order to take out the rest of them while also receiving a batch of resources as payment. With this in mind, it’s safe to say that Halcyon is not a game you should get if you’re looking for a good story. 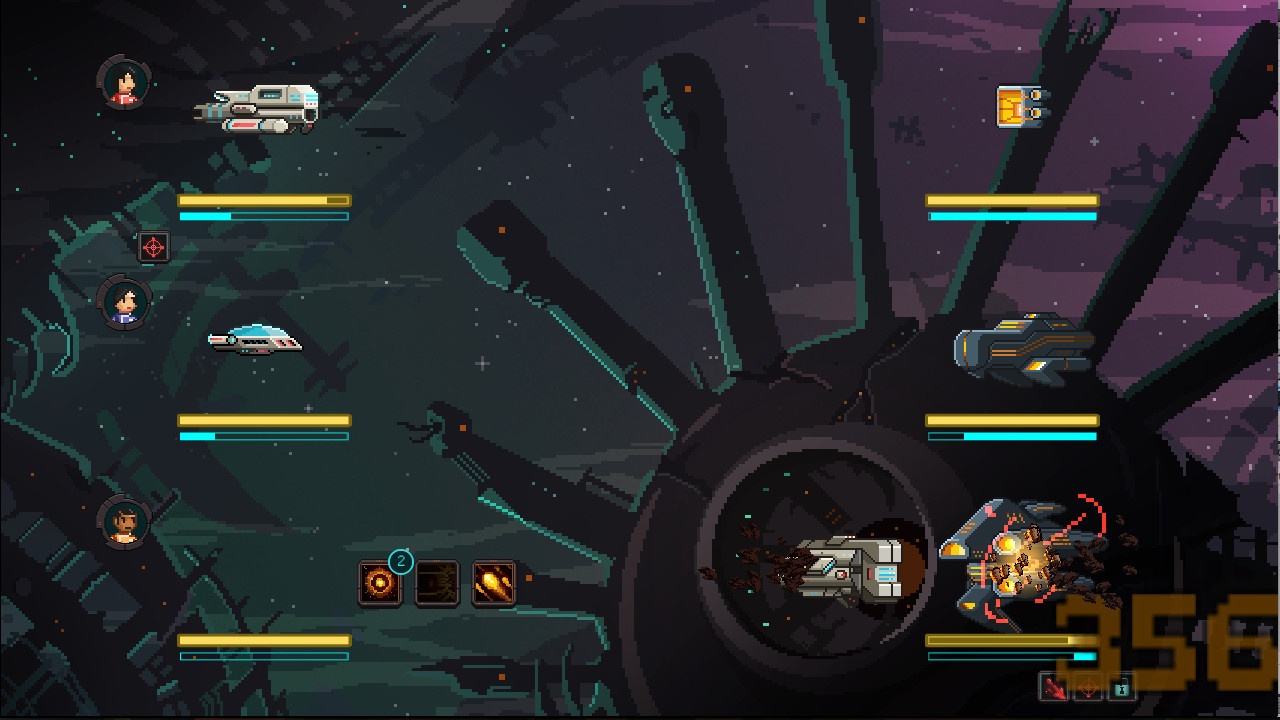 Now I feel like it’s necessary to address how good looking the game is. Still, this is a very subjective matter, but as someone who likes various different kinds of pixel art I can say that this is one of those games where you can really tell that there was a lot of thought and dedication put into it in order to make it good. That said, I do wish that some of the attack animations would be a little more refined and better looking. Since I decided to approach the visuals, I might as well get this out of the way and say that the music is also pretty good. I do not mean it’s something that will completely blow your mind, but if you’re into chiptunes (or whatever this kind of music is called) I think the chances that you’ll enjoy it are very high.

Now, where the game truly shines is in the gameplay department. As mentioned previously, the game is split between two parts, strategic management and combat. Combat works like in pretty much any other party turn-based game you’d find out there. Each side can have up to 3 units and they remain on their spot, there is no movement or positioning that gives you the upper hand. The only thing that can give you an edge at the start of a fight are your stats, which will determine which unit acts first. Combat itself is divided into space combat and ground combat. The only difference real difference between these, in terms of gameplay, is that while in space you’re controlling your ships, having each one of them specific abilities and some abilities inherited from the officers controlling them, in ground combat you’re controlling just the officers or, in some cases, members of your crew, and each of them, like spaceships, has their own unique set of abilities. The way the strategic element plays a role here is that, as you use your officers and ships they’ll level up and you’ll be able to upgrade your existing officer abilities or purchase new ones, either for space or ground combat. Both the officers and ships, and subsequently their abilities, are divided into three types, tactical, engineering and scientific. Abilities play a huge role in combat because there are various buffs and debuffs that can turn the tide of battle, and certain abilities can chain together in order to exploit these debuffs and deal critical damage. This means that in the late game some officers will be better for space combat while others will be better in ground combat.

Personally, the combat is the most enjoyable part of the game for me but the strategic element doesn’t stay far behind. When you’re out of combat, every task that you issue to be undertaken will take a certain amount of days to complete. This can be something like producing a ship, training an officer, researching a new technology or clearing rooms on the space station. After clearing a room you can build modules in them (kind of like in the newest XCOM games), such as an Officer Academy, resource multiplayers or repair bays for your ships. However, clearing these rooms requires a free officer with a specific level so the game doesn’t allow you to expand to the station maximum capacities right off the bat, that will take time. 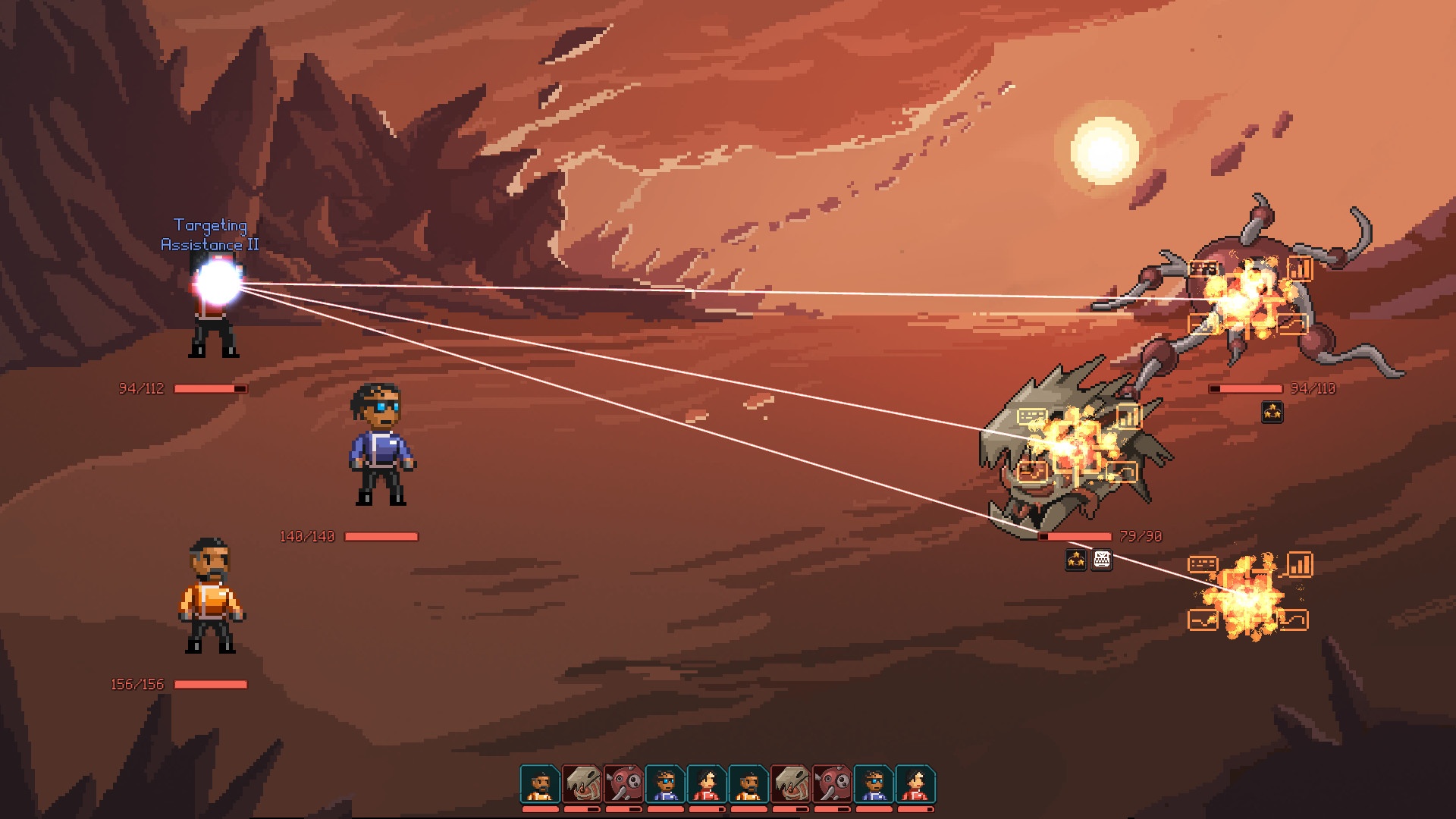 You’ll spend quite some time in the star map, where you’re able to see the surrounding planetary systems as you explore, and you’ll also be able to pause or resume time and send your fleets to any given location. When time is resumed you can see fleets from other factions flying around and you can come across random events. These usually are random quests, in which you intercept a distress signal from a Federation facility and have a time limit to check it out, but these events call also be something like someone getting stuck inside a resource multiplier and you’re given the option to either save that person, attempt to multiply it or just leave her there. There’s plenty in store for you and I don’t want to spoil most of them so I think these examples shall suffice, just know that everything can go terribly wrong.

There’s only one thing that slightly bothers me in Halcyon, and that is the fact that resource gathering is a rather dull process and is the most bothersome task in the game. The game really forces you to grind your way until you have enough to research a new technology or to build something. Some missions will have you defending Federation facilities of enemy attacks which will then allow them to produce resources for you, such as materials, dark matter, crew or fuel. Still rewards for completing missions are rather low and don’t compensate what you spend in completing them, and collecting resources from these facilities forces you to go back and forth throughout the entire map, spending fuel and leaving your base open to attacks. Still, if you have a free officer you can assign it to a multiplier on your base in order to produce more resources. In the same sense, you can also upgrade said facilities so that they can store and produce more resources each day.

In the end, despite requiring some grinding in order to progress through the game, I think Halcyon manages to overcome that. Despite the fact that the plot is not the main focus, the game does have its fair share of humour which is not only present in dialogue, but also in the biographies of your officers. What matters is that, despite all its flaws, the game is still plenty of fun and will probably have you saying to yourself “Just one more mission”. That combined with an extremely enjoyable soundtrack and gorgeous pixel art makes this a hard game not to recommend. I’m sure any fan of turn-based party combat will thoroughly enjoy Halcyon 6!