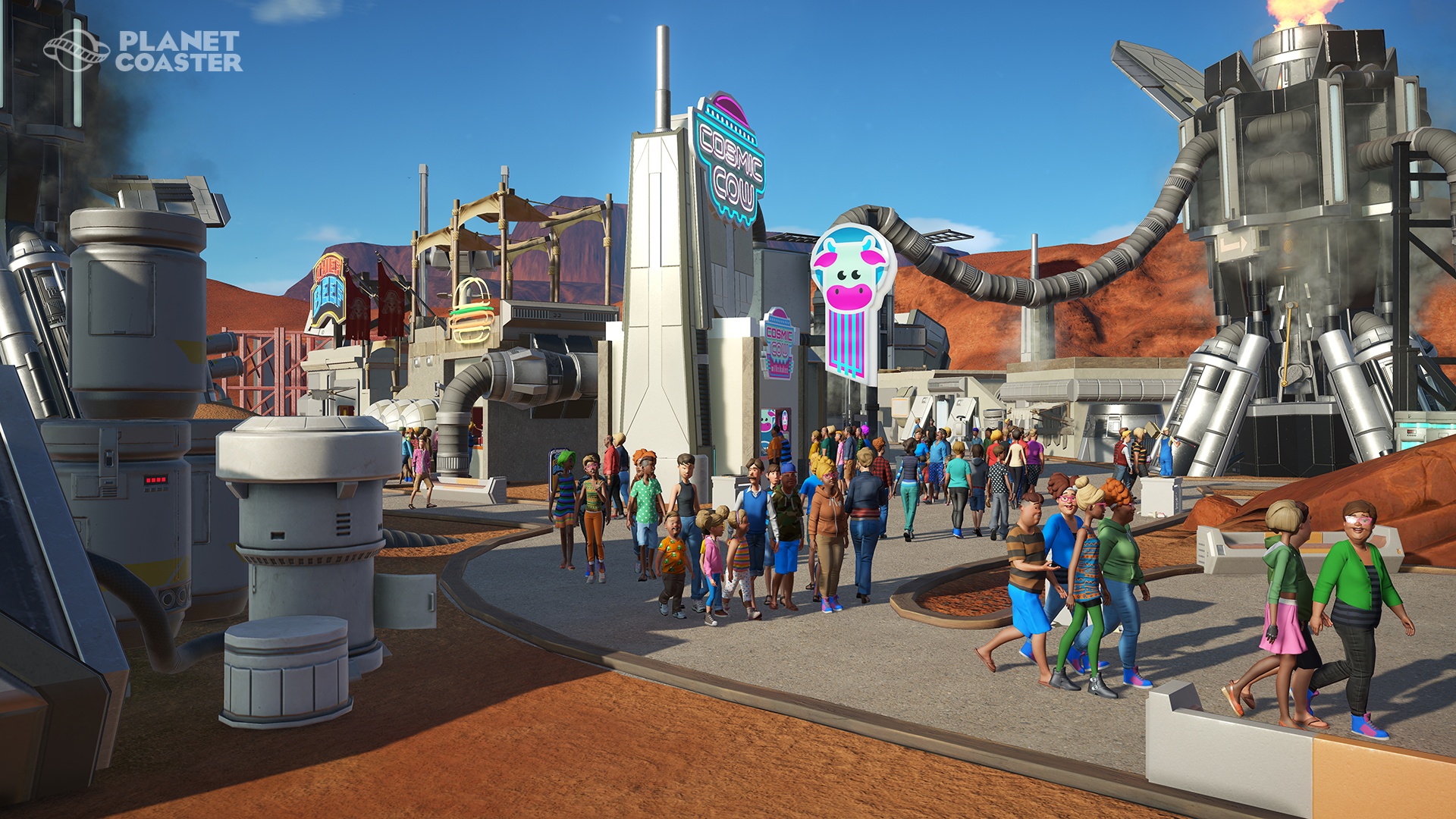 Upon first loading Planet Coaster, I could hardly believe how closely the welcoming, boxy user interface and rotating globe that introduces Planet Coaster reminded me of the very first Theme Park game made by Bullfrog. This can’t be a coincidence, because so much else in the game is also reminiscent of the classic Amiga title that became one of the most iconic games of its era, and that’s not a bad thing. After all, the other genre mainstay, Rollercoaster Tycoon, has only refined, rather than revolutionised the formula.

So why should you consider purchasing Planet Coaster then? Well, simply put, because it is among the best theme park management games that I’ve ever played. Firstly, it is the best looking game of it’s kind by far, with beautifully crafted, colourful and characterful graphics that really enhance the feeling of immersion. Players can pan, zoom and rotate the park in any way they choose to get the best view, and as always in games of this kind, you can hop straight on to your latest creation and ride along in first person. These things aren’t new or special, but Planet Coaster delivers them without any screen tearing, without restricting the view or the angle, and without compromising detail no matter how near or far to the action you want to play from. It’s impressive stuff.

It isn’t the graphics that make the game though, and following the first few relatively easy campaign scenarios are over and you’ve got the hang of things, you’ll want to keep coming back because of the supremely powerful rollercoaster building toolkit that Planet Coaster possesses. Track pieces are unusually easy to place and manipulate in order to create any combination of twists, turns, humps and dips, as well as the more complex elements like loops and corkscrews. It’s an inspired system that works because of its accessibility and generosity, allowing players to go nuts with the kind of rides that have always seemed impossible to create in other, similar games. 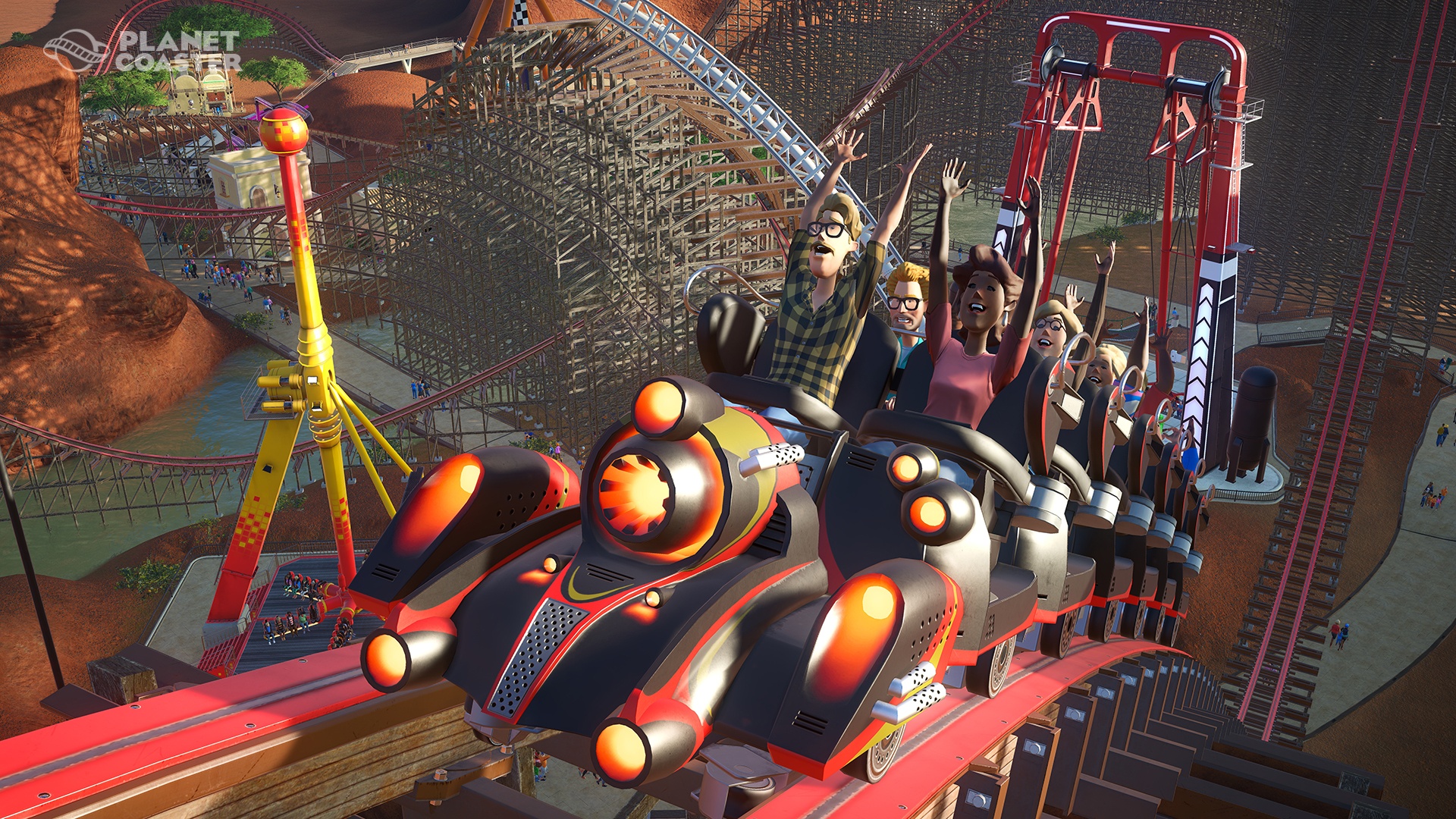 Park design doesn’t end there though, because Planet Coaster is also impressively well featured with how much freedom it allows players to manipulate the land around them. Hills can be drawn from the ground so that a rollercoaster set high above can plunge downwards through a man-made cavern filled with mechatronic dinosaurs. Valleys and chasms can be carved out to form lakes and rivers that play host to a waterside picnic spot set against a backdrop of pirates fighting redcoats, or aliens invading from Mars. The method for manipulating the world and dressing it with such lavish accessories is as straightforward and intuitive as it ever has been in a similar game.

It’s a good thing that Planet Coaster will be so familiar to players of similar games, because sadly it lacks any kind of useful tutorial. I can’t imagine how a new player could find themselves especially in trouble navigating the relatively flat and highly visual toolbars and menus, but then again I did feel as if I was often reliant upon muscle memory – upon having selected similar pieces of park decoration before, or having hired and fired similarly bone idle staff members in other games.

It’s in this park management area that Planet Coaster is weakest, offering next to nothing that wasn’t available in Theme Park twenty years ago. Staff can be hired and fired, wages can be set, salt can be applied to fries and the quality of prizes can be rigged. The biggest rides attract the biggest prices and the most people, and in the main, the game is content to allow the player to focus on building and developing the park to attract more and more people. There is little focus on making complex management decisions and there are no complex problems to overcome, except perhaps the ridiculous whims of an ever more demanding public. 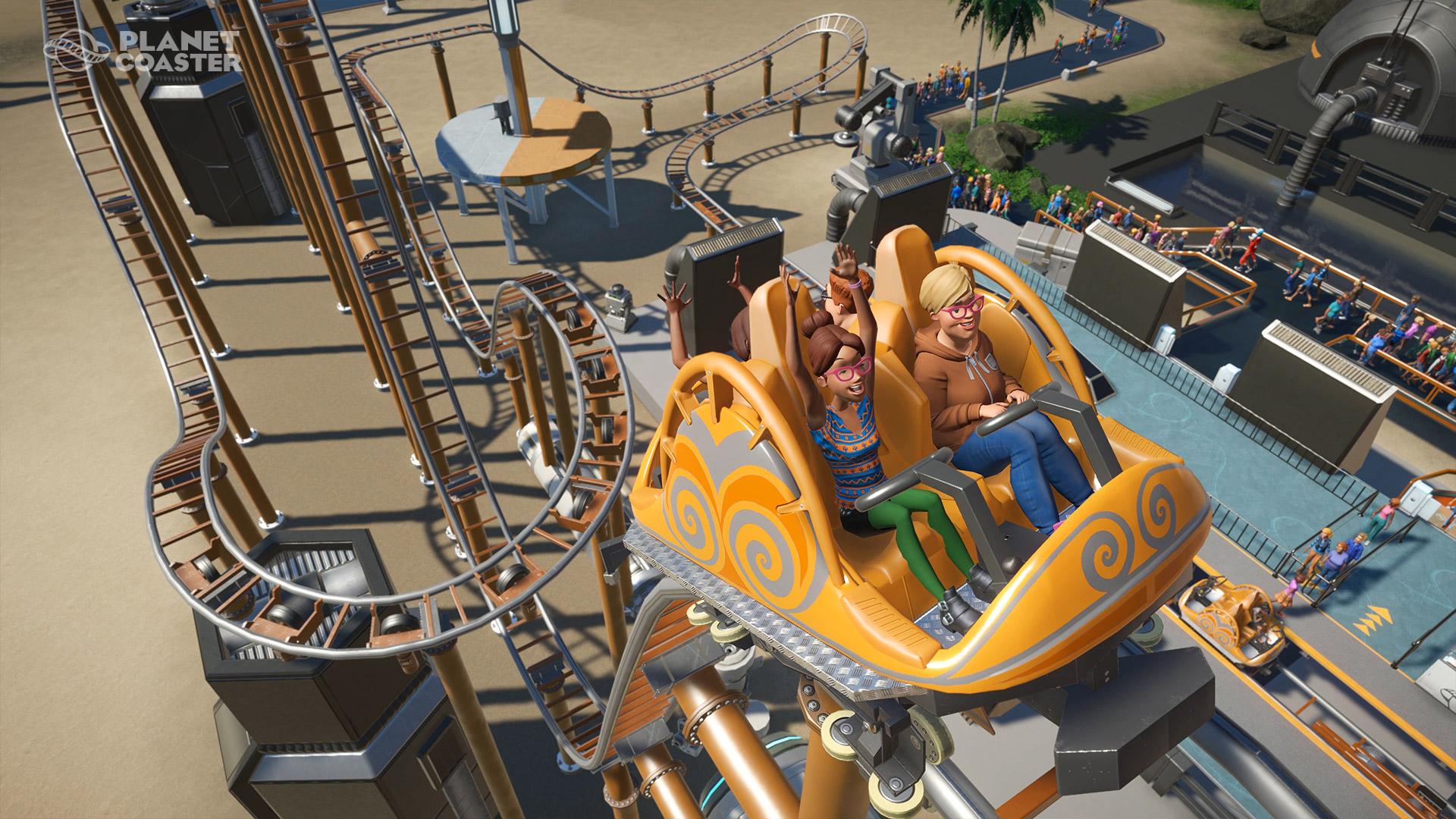 Planet Coaster isn’t a hard or even challenging game as such, but it is the kind of game that offers stepped goals that are progressively more difficult and allow perfectionist players to push themselves onwards beyond merely completing a level. This structure again favours accessibility rather than elitism, but in any event as long as you find the core gameplay enjoyable, it doesn’t really matter because there is certainly a lot of it. Like the original Theme Park and the sequels and rivals that have been conceived since, there are a large number of scenarios and modes in Planet Coaster that each present the player with various challenges, limitations or goals to achieve before progress can be made.

This familiarity across interface, structure and level of challenge introduces us to a friendly, welcoming game that we’ve likely all seen before under a different name. For returning fans of the genre, it means rapid access to a beautiful and very powerful theme park management game that is unlikely to take them outside their comfort zone in terms of park management or challenge, but it does offer the very best experience of its kind that I’ve come across, and what was fun in the mid nineties is still fun no, there’s no doubt about that.

I would struggle to recommend Planet Coaster to a fan of serious management simulation games, as it simply fails to offer that kind of experience entirely. It does provide a fantastic toolkit for building the ultimate theme park, with literally thousands of trees, ornaments, furniture pieces, blueprints, rides and shops to place between elaborate, limitlessly customisable rollercoasters and log flumes of your own design. There are tons of campaign levels, challenges and sandbox levels to play through, and it is presented through the most beautiful graphics that this genre has ever seen.