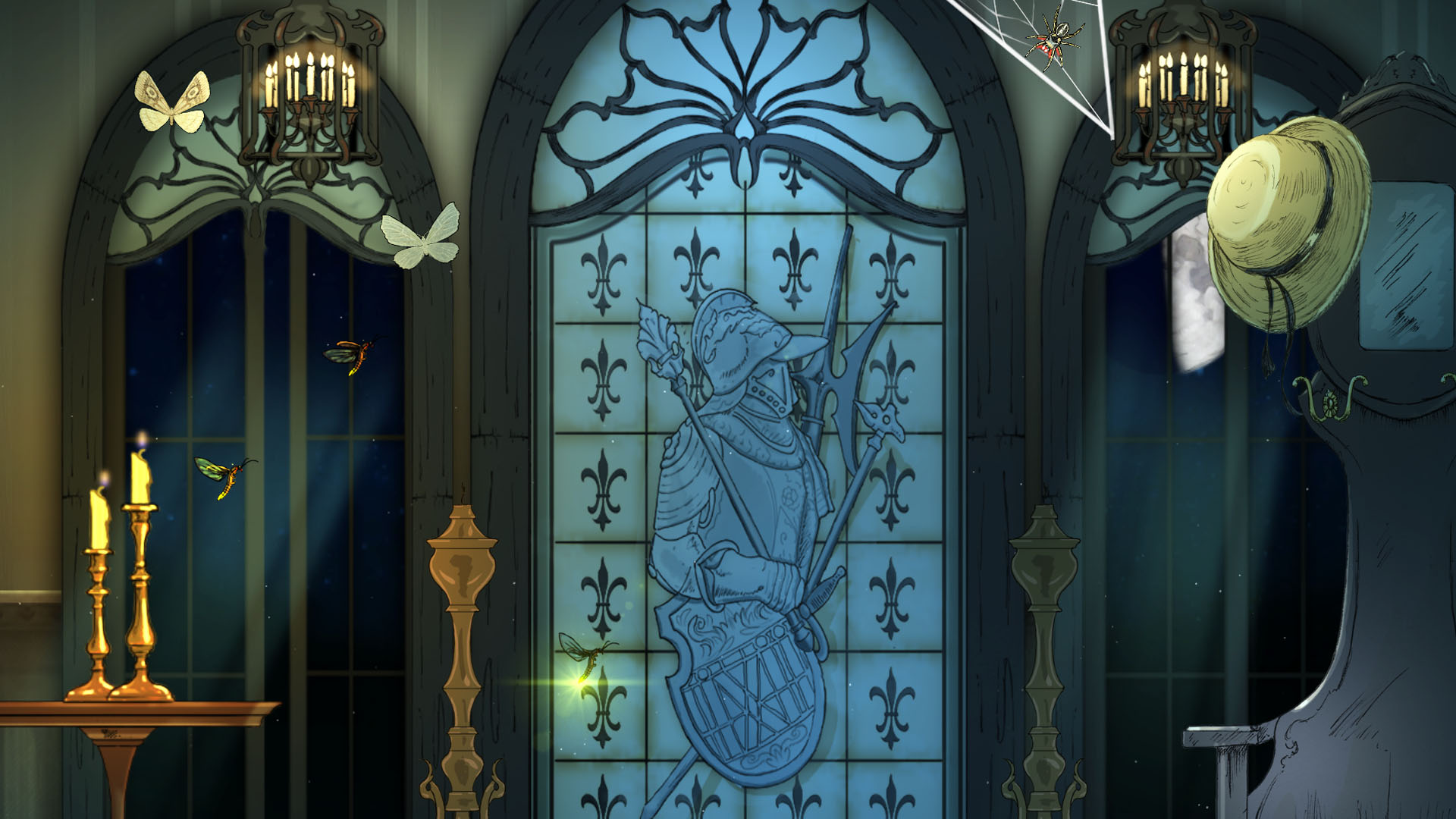 It seems to me that every other game I play these days, I’m tasked with either shooting someone or blowing something up. I’m not exactly complaining. After all, nobody forced me to buy Battlefield or Grand Theft Auto. I bought them because like most of us in the gaming community, I like committing virtual murder. With that in mind, it was extremely refreshing to boot up Spider: Rite of the Shrouded Moon and simply, be told to go and be a spider. Which is exactly what I did. For hours.

At its core, the game is incredibly simple. You control a little spider that can walk on most surfaces available. Holding x will bring up a jumping arc and releasing it will make your arachnid counterpart spring away in that direction. Holding circle will bring up the same jumping arc, but this time (as long as there is a valid surface it can stick to) you will leave a line of webbing behind you. Connect this webbing into a geometric shape such as a square or a triangle and, huzzah, a web will appear. This can be used as a platform for you to traverse upon, or more importantly, to catch your dinner. 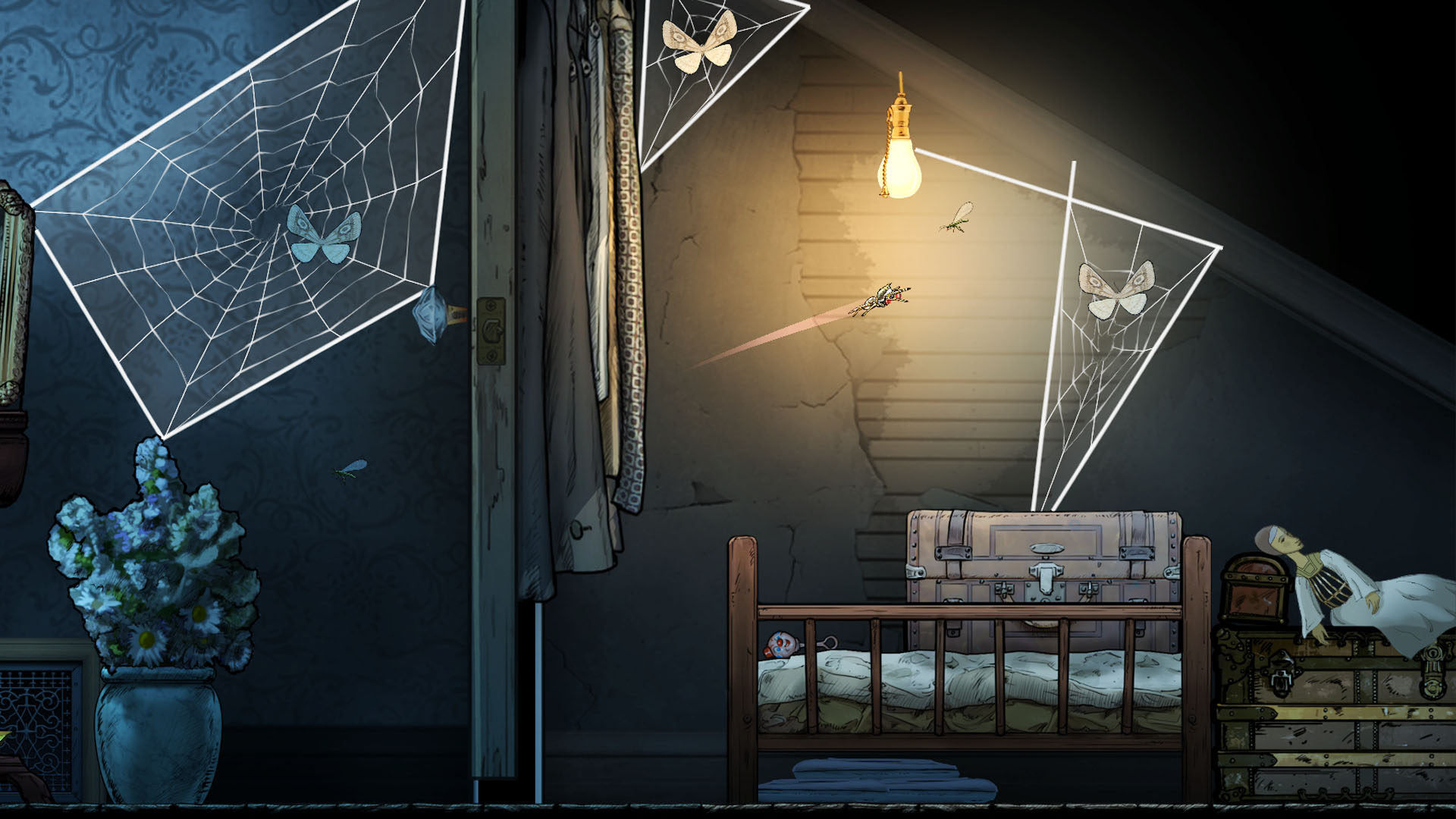 Each stage is populated with a variety of different insects for you to feast upon, which offer a number of points and more silk for you to spin webs with. Whilst most of these insects are captured by simply trapping them in your web and scuttling over to devour them, some require more devious tactics. The ladybugs, for example, cannot be caught unless they willingly fly into your web to investigate another insect trapped there. Others, such as the bouncy dune-bug need you to leap into them, and nudge them into your web manually. The game also offers a ‘web bonus’ for munching down on your hapless victims without leaving your web, so careful planning is often required to maximise your score whilst staying alive, as remaining on zero silk for too long will result in your death, and the level restarting.

It’s not all about high-scores though. Jump on certain objects or squeeze into the right nook and you will often find clues that lead to the over-arching mystery of Blackwater Estate, the story’s setting. One such example had a seemingly random series of letters scrawled upon an old record. With no other point of reference to this mystery, I simply carried on with my day, spinning webs and scoffing down the unfortunate blue bottles foolish enough to wander into them. A few levels later I found myself inside a piano and able to press certain keys. It took me a little while to put two and two together, but when I did, another stage opened up for me to explore. The nice part however, was that the game didn’t demand that I solve anything. If I had wanted, I could have simply played each level for the score alone, and been done.

An interesting feature of the game is its use of GPS to determine how the general aesthetic (day or night, rainy or clear) of each level is presented, and how it is populated. The easiest example to give would be the day and night cycles. Day brings with it critters such as butterflies and wasps, whereas night brings fireflies and moths, with the weather pattern determined by the weather at your actual location in the world. Initially, I saw this as more of a hinderance as most of my gaming is done at night after work, and certain aspects of the mystery (and some of the insects) only appear during the day. A quick search of the options allowed me to set the weather system to the Blackwater Estate default, which randomly alternated between the cycles for me and allowed me to progress. 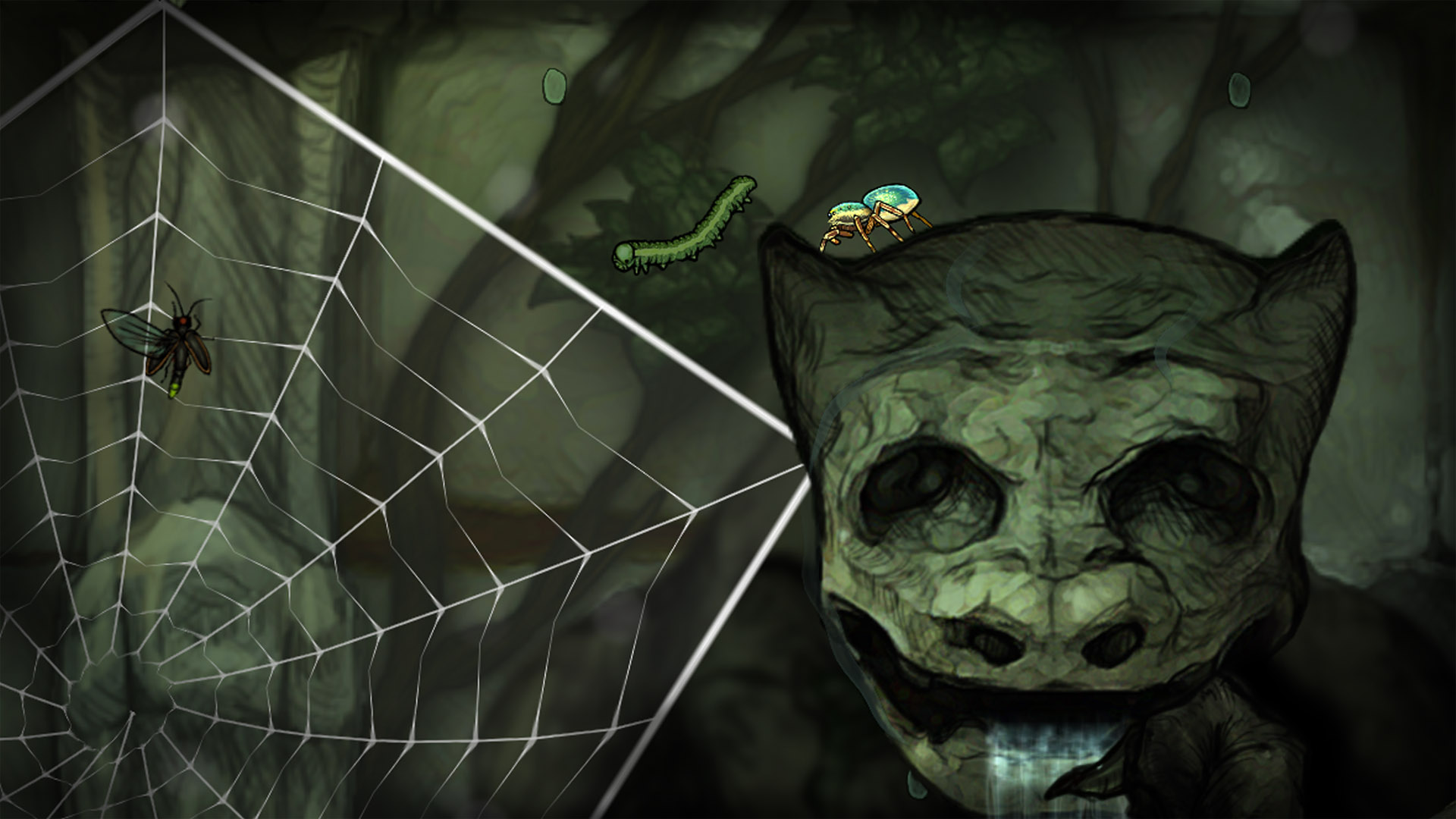 Visually, it seems as though a lot of care has gone into the presentation of the game. Everything has a distinct ‘hand drawn’ feel to it, and while the animations are simple, they are extremely effective. Flies will land and settle with a little flap of their wings, and most of the insects caught in your web will struggle a few times before giving up and accepting their fate. The levels themselves are beautifully drawn, and the day and night cycle transforms a sunny yard into a creepy garden to explore. One minor letdown however was the sound design. Although the insects all buzzed accordingly, the actual soundtrack was terrible. None of the tracks added any atmosphere to the game whatsoever, sounded extremely amateur and were ultimately muted after the first hour or so.

As you can probably tell, I am extremely pleased with Spider: Rite of the Shrouded Moon. It allowed me to explore at my own pace, offered a variety of ways to play, and each insect that I devoured was added to a beautifully illustrated collection for me to complete. The mystery of Blackwater Estate was intriguing and warranted the further exploration of the levels to find the hidden clues. Everyone that I showed the game to was able to pick it up extremely easily, and were pining for another turn after the controller was taken from them. Apart from the minor quibble with the soundtrack Spider: Rite of the Shrouded Moon is an extremely well made game, and one that I highly recommend to anybody. Fang-tastic stuff.