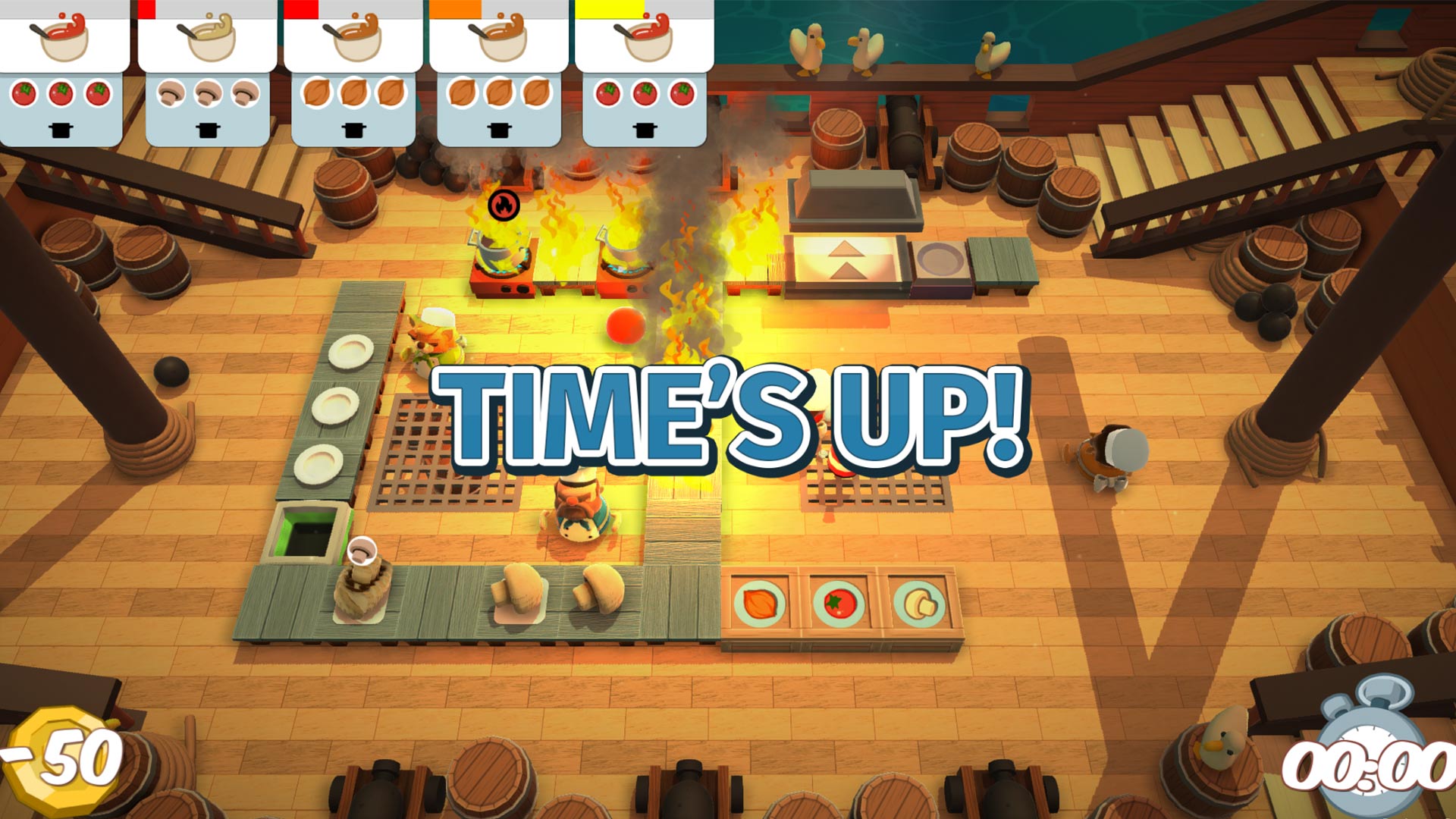 Overcooked is the first game from Cambridge-based developer, Ghost Town, and man, what a calling card. Originally released back in August of this year (that’s 2016 for those reading from the future), Overcooked proved one of the most enjoyable couch co-op gaming experiences of modern times and a perfect combination of accessible gameplay and outrageously addictive mechanics.

With Christmas now just around the corner, Ghost Town and Team 17 have returned to the manic multiplayer cook-off with a holiday bundle that includes the brilliantly fun, ‘The Lost Morsel’ DLC along with an all new collection of festive, holiday-themed additional content. None of this changes the fundamental gameplay in any meaningful way, but when it’s as enjoyable and as oddly compelling as Overcooked, to make any major changes would be to ultimately loose the simplistic brilliance that makes it quite so special.

While Overcooked can be played and, to an extent, enjoyed, as a single player experience, it is unquestionably at its best when played with friends. When played with three other friends in particular, I can honestly say that it is amongst the most enjoyable and downright stressful experiences that I have ever had with a video game. With only two buttons used, one might be forgiven for thinking this an overtly simplistic experience, but while it is certainly easy to pick up and play, Overcooked quickly forces you into a hectic experience in which kitchen management becomes your primary goal. Yes, each individual action is very easy to achieve, but achieving them in the right order and in the speed required to attain a decent star rating is a different matter altogether.

The bizarre thing is, despite the simplistic control scheme, the cartoony graphics and the comedically themed stages, Overcooked feels like a genuinely realistic interpretation of what it would be like to work in a busy kitchen. This is all about managing orders, getting the timing right and working with your team to ensure that each individual element is not only ready, but more specifically, ready at the right time. 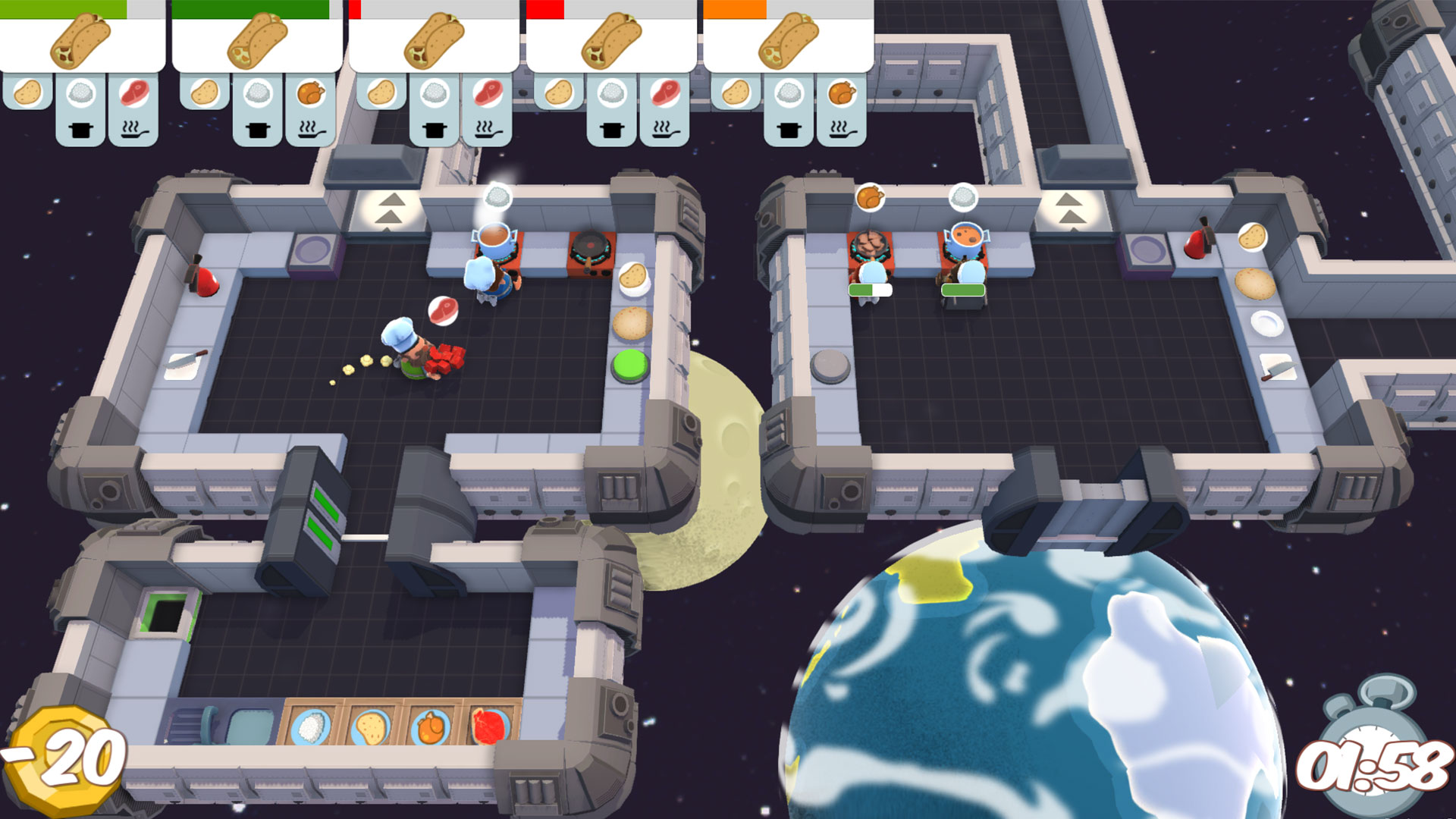 You’ve just cut up all the ingredients, you’ve cooked them to perfection, you’re ready for service…..“Where’s the plate? Where the hell is the damn plate?” This is taken verbatim from the last game that I played with my wife. Needless to say, the plate was sitting in the sink unwashed as I watched on in horror as the timer on that particular order whittled down to nothing. Again, washing a plate is easy, but making sure that it’s ready while you’re trying to manage 6 other things takes the experience to a whole new level. The majority of gamers will be fully aware of how stressful a ticking clock can be in video games…..try 5 of them at once.

The themed levels and oddly constructed kitchen layouts successfully deliver some much-needed variety by providing numerous obstacles and stages that move and change shape as you progress. Believe me, it’s hard enough to keep everyone organised when the kitchen layout is standardised, but when part of it is sliding across the deck of a ship or, God forbid, ghosts start showing up and moving your equipment around, stages can quickly descend into curse-ridden mayhem as you and your team attempt (often in vain) to get the meals out on time.

In terms of content, there is a decent amount with the campaign playable from start to finish with anything from 1-4 players. Heck, there is even a story involving time travel, the onion king and, errrr, his incredibly charming dog, Kevin. Yes, it’s all nonsense, and well, some could even argue that it’s completely unnecessary, but the writing is relatively witty and the setting is fittingly absurd. The vs. mode is equally well served with plenty of stages and no end of entertainment. The game is arguably at its best when played cooperatively, but there is still plenty of fun to be had when going up against your friends……bizarrely, it’s arguably better for your friendship to keep things competitive due to the incredibly stressful nature of the co-op. Playing competitively, you’ve only got yourself to blame, play in co-op however, and the blame will almost certainly be aimed at your friends.

It could be argued that the star system can be a tad vague and that the game lacks variety, and while the star system still remains somewhat unclear when you are in the midst of a stage, the additional content found in the Holiday Bundle does provide enough in the way of new stages, characters and challenges to imbue Overcooked with the kind of long-term appeal that it was arguably lacking at launch. 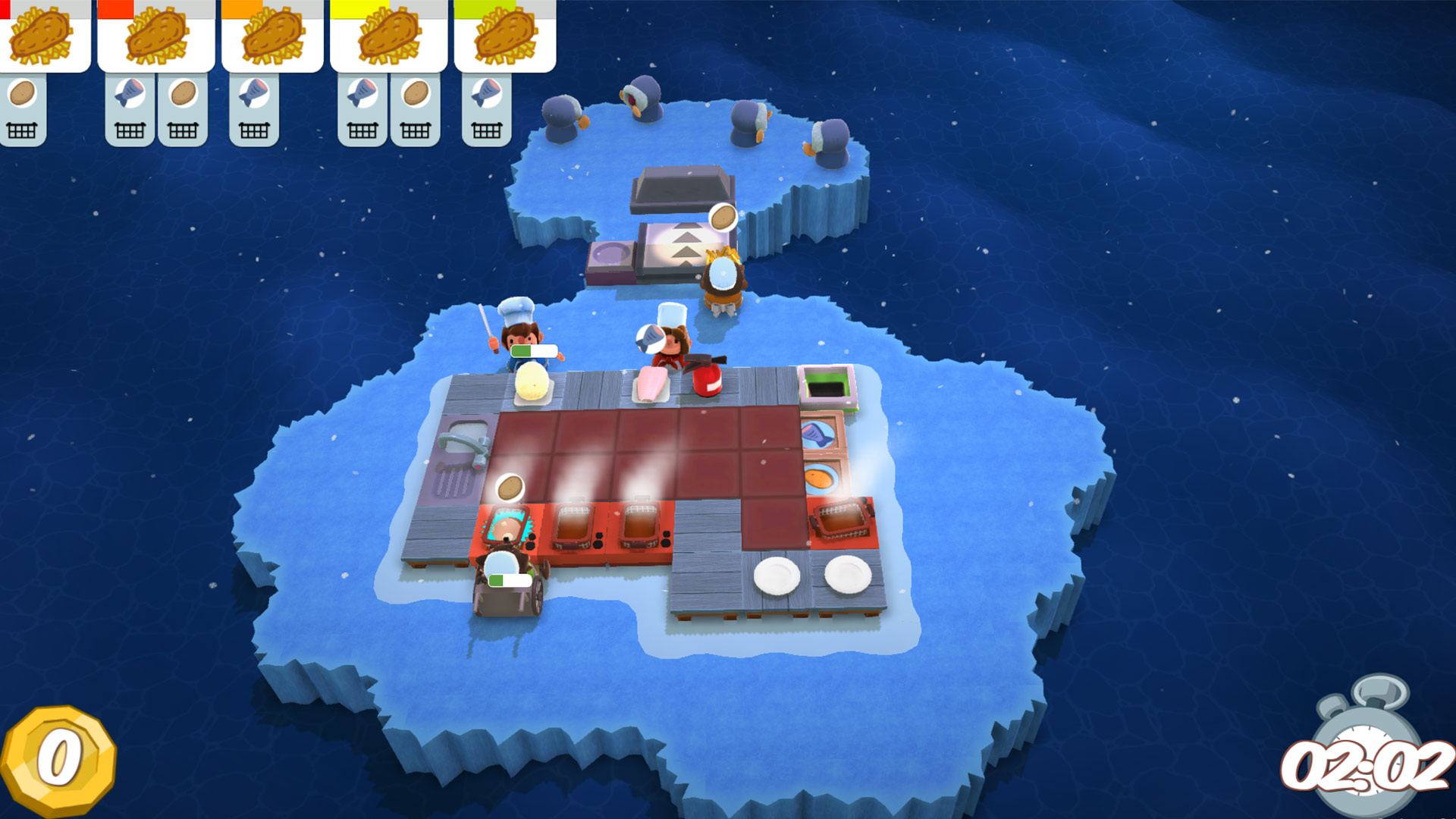 It’s all more of what you will have already seen in the main game, but the ‘Festive Seasoning’ DLC adds eight new co-op levels, a handful of festively-themed characters, a new vehicle, additional ingredients and, rather unbelievably, a flamethrower. Sure, it’s not the safest way to cook your food, but I’ll be damned if it’s not fun, and besides, what’s the fire extinguisher for if not the overzealous use of a flamethrower in the kitchen? This Christmasy bonus proves a welcome addition to the package, and while I doubt anyone will want to be reminded of Christmas come the dark days of early January, it does provide a fitting seasonal bonus in the here and now.

The ‘Lost Morsel’ DLC on the other hand doesn’t suffer from the same problem with the theme proving much more varied and altogether more strange. Yes, all of the 6 campaign missions are set in a jungle because, but the additional characters, yep, they’re all over the place. A dinosaur, a robot, a French bulldog, a panda, a bear and a pig – yeah, I have no idea what they all have in common, but they’ve come to the jungle (in a helicopter apparently) to cook. Sure, it’s all very odd, but then so is just about everything about the brilliantly irreverent Overcooked.

With 40 campaign stages in all, a decent selection of adversarial options, a host of different themes and an array of genuinely bizarre chefs from which to choose, Overcooked Holiday Bundle provides more of what was already great about the original vanilla release. It might not be much fun on your own, but Ghost Town’s first release is amongst the finest co-op experiences of the generation. Easy to pick up, difficult to master, and all but impossible not to swear, Overcooked remains the quintessential couch co-op experience.