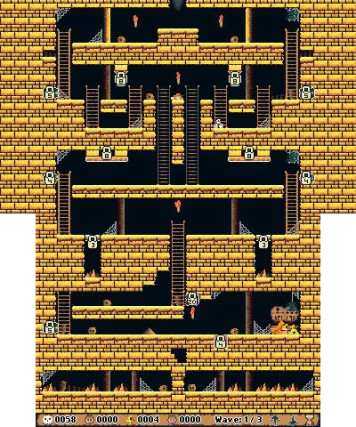 Defend Your Crypt is a complex strategy game which puts the player in the shoes (sandals?) of an Egyptian Pharaoh with the objective of protecting his treasure from intruders by setting various traps. This simple idea is expanded on greatly throughout the game, as the player’s ability to strategize and react quickly are put to the test in a series of levels which continue to grow more complex as the game progresses. However, before delving into the specifics of gameplay, I’ll start with the more basic visual and auditory aspects of the game.

The background music in Defend Your Crypt is weirdly unfitting for the pace of the gameplay. In addition, sound effects, such as the sound of enemies dying, are very sharp and loud compared to the music, which can be distracting in the midst of a hard level that requires intense focus. Especially in later levels where there are several enemies and many of them will be dying in quick succession, I find it best to play with the sound turned off.

Visually, this game’s retro style works well for it. While enemy designs are simple, it is easy enough to tell enemies with different abilities apart from each other, which is useful in strategizing the best ways to kill them. There are two weapons which look very similar and can be mistaken for each other at first, which can be a bit annoying, but shouldn’t cost the player more than one mistake, which usually won’t result in losing the level. Level designs in this game are phenomenal, and while they are all aesthetically similar, the different nuances can lead to vastly different gameplay strategies. 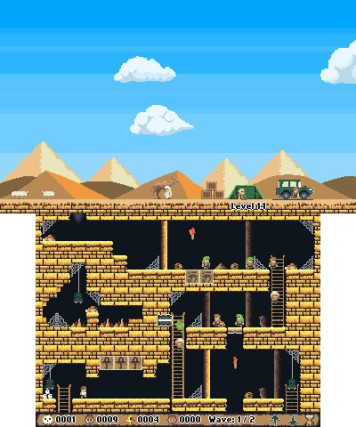 This game lacks a basic plot, aside from the basic premise of the player protecting their treasure from robbers. This isn’t necessarily a problem, as the gameplay functions fine on its own without a guiding plot, though I do feel the creators could have taken the level design a bit further if there was more of a plot. I also have to deduct points due to a few spelling and grammar errors in the opening text. It isn’t a huge deal, but anything that makes the game seem less professional is a negative.

The gameplay is what makes Defend Your Crypt truly shine. Players must keep robbers away from the treasure located at the end of each map by activating traps to kill the robbers. Such traps include: spiky floors, falling platforms, arrows, spears, and more. Each trap has a certain cool down time, so players must properly strategize when to activate a trap in order to catch another enemy with the same one. In addition, certain traps have the ability to block enemies’ paths in addition to killing them, allowing the player to reroute the intruders and force them to go a different way.

The first few levels have the player focus on timing and map awareness, as the player must learn which traps to activate at what time. However, in later levels, multitasking becomes another crucial aspect of gameplay. Typically, these levels feature two waves of enemies. The first wave is usually simple, allowing the player to get a feel for the layout of the map and the traps at their disposal and allowing them to begin to strategize how to properly utilize each. During the second wave, more enemies appear at much quicker intervals, forcing the player to think quickly and constantly change their focus, as to not let any enemies slip past them. 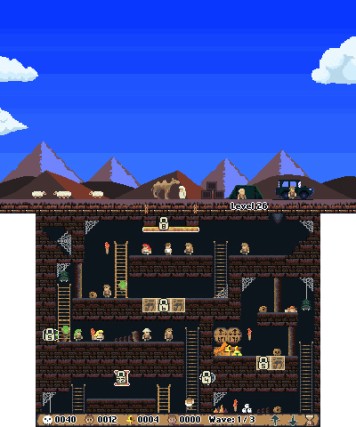 In even more difficult levels, the maps will extend across both screens. Of course, the player can only activate traps on one screen, so the player must switch between screens, activating traps on one while still keeping an eye on all the enemies on the other. This leads to rapid gameplay in which the player is constantly switching screens, activating traps, and strategizing on the spot, pushing the player to their mental limits. However, these difficult levels are often a little forgiving, as they typically feature more than one treasure (with all treasures needing to be stolen in order to lose the level), and lost treasures refresh after each wave.

One notable thing missing from this game is the lack of alternative modes, leaving the player with little to do upon beating the main levels. A stage creator would fit this game’s layout perfectly, as players could select level templates and decided where enemies spawn, where the treasure is, and where certain traps would be placed. I think there is a lot the creators could have done with the game’s formula, and while the game is already outstanding, the replay value is a bit lacking due to its lack of alternate features.

All in all, Defend Your Crypt is a very well made game. It admittedly isn’t the longest game out there, so players won’t likely find themselves playing it for weeks on end. Nevertheless, the gameplay is challenging and addictive, with a very reasonable learning curve, allowing gamers of all kinds to pick up and learn the game at their own pace. Gameplay is difficult, but rarely frustrating, as players can usually easily identify and correct their mistakes. For this reason, I think Defend Your Crypt is a great title for anyone looking to test their mental reflexes.